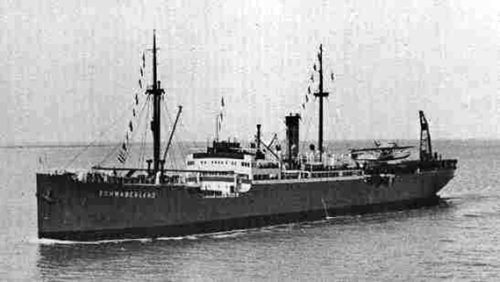 In 1938/39 Germany undertook its third Antarctic expedition. Led by Kapitän Alfred Ritscher of the German Navy, the expedition was to find part of Antarctica on which a German whaling station could be established as a way to increase Germany’s production of fat. Whale oil was then the most important raw material for the production of margarine and soap in Germany, and at the time Germany was the second largest purchaser of Norwegian whale oil. Besides the economic disadvantage of a dependence on imports, it was thought that Germany would probably soon be at war, and this would add a further burden onto Germany’s foreign currency reserves. Another objective was to explore the possibility of creating a German naval base in the Antarctic.

On 17 December 1938, what was formally designed as the New Swabia Expedition departed Hamburg on the freighter Schwabenland, a freighter which had been built in 1925 and renamed in 1934 after the Swabia region of southern Germany, and could also carry and catapult aircraft. Prepared and launched in secrecy, the expedition had 33 members in addition to Schwabenland’s 24-man crew. On 19 January 1939 the ship arrived off the Princess Martha coast, in an area which had recently been claimed by Norway as Dronning Maud Land, and started to chart the region. German flags were placed on the sea ice along the coast. Naming the area Neu-Schwabenland, after the ship, the expedition established an interim base and in the following weeks teams walked along the coast recording claim reservations on hills and other significant landmarks. Seven photographic survey flights were made by the ship’s two Dornier Wal flying boats. About 12 4-ft (1.2-m) aluminium arrows, with 11.8-in (0.3-m) steel cones and three Swastika-embossed fins, were dropped onto the ice by the ‘boats over the points at which the machines made turnings.

Eight more flights were made to areas deemed to be of significance. In overall terms, the ‘boats covered a very large area and took more than 16,000 aerial photographs. The Schirmacher Oasis, an ice-free plateau, 15.5 miles long and with a maximum width of 1.85 miles (3 km) and dotted with more than 100 fresh-water lakes, was spotted from the air by Richardheinrich Schirmacher shortly before Schwabenland’s departure from Antarctica on 6 February 1939.

On its return passage the expedition made oceanographic studies near Bouvet Island and Fernando de Noronha, arriving back in Hamburg on 11 April 1939. Meanwhile the Norwegian government had learned about the expedition through reports from whalers along the coast of Queen Maud Land. However, Germany made no formal territorial claims to New Swabia, and built no whaling station or other lasting bases.

But this German interest combined with the possible territorial ambitions of other nations led in 1943 to Operation ‘Tabarin’, schemed and implemented by the Admiralty and the Colonial Office to establish a permanent British presence in Antarctica. The operation’s bases were the first ever to be built in Antarctica.

Several reasons have been suggested for ‘Tabarin’, including the perceived threat of a possible German presence. Moreover, in 1943 British personnel from the armed merchant cruiser Carnarvon Castle found and removed Argentine flags from Deception Island, and there were also concerns within the Foreign Office about the possibility of post-war US activity in the region. The primary reason for ‘Tabarin’ was the establishment of British claims to various uninhabited islands and parts of Antarctica. This objective was also seen as a response to a general Argentine sympathy toward Germany. 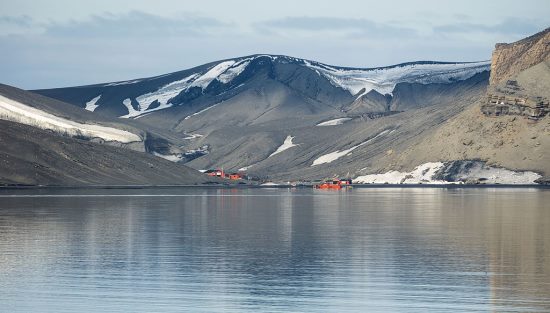 The Germans were known to be making use of remote islands as rendezvous points and as shelters for commerce raiders and U-boats, and for the supply ships on which these were reliant for replacement weapons, fuel, spare parts and fresh food. As early as 1941 the British had come to fear the possibility that Japan might attempt to seize the Falkland Islands group either as a base or for transfer to Argentina in the hope of gaining political advantage for the Axis and denying their use to the UK. In the British South Shetland Islands group, Deception Island possessed a sheltered anchorage with an old Norwegian whaling station, and in 1941 men of the armed merchant cruiser Queen of Bermuda had destroyed the coal dumps and oil tanks on the island to prevent their possible use by the Germans.

It has also been suggested that the operation may have been, at least in part, a disinformation exercise designed to suggest that the British suspected German naval replenishment activity and thereby help to conceal the fact that the British were able to read much of the German radio traffic enciphered by Enigma machines.

Led by Lieutenant James Marr, who had accompanied the British explorer Ernest Shackleton on his Antarctic expeditions in the 1920s, the 14-strong British party departed the Falklands in the minesweeping trawler William Scoresby and Fitzroy, on 29 January 1944. During February the party established bases near the abandoned Norwegian whaling station on Deception Island and at Port Lockroy on the coast of Graham Land on 11 February. A further base was established at Hope Bay on 13 February 1945 after the failure of an attempt to unload stores on 7 February 1944. 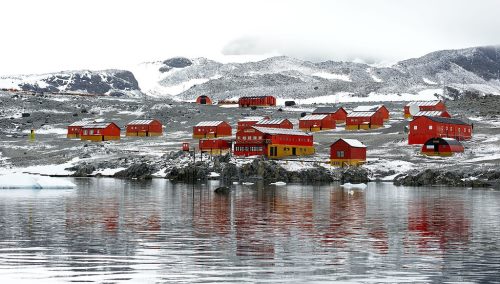 The doctor of the ‘Tabarin’ expedition was Dr Eric Back, who also acted as the meteorologist and set up the Antarctic continent’s first weather station at Port Lockroy. After the end of World War II in 1945, the bases were handed over to civilian members of the Falkland Islands Dependencies Survey, which in 1962 became the British Antarctic Survey.

It seems that the decision to undertake ‘Tabarin’ was not political, as Prime Minister Winston Churchill was out of the country at the time and one of his memoranda, after news of the British bases had appeared in the press, indicated that he was unaware of the decision. In this memorandum Churchill expressed his worries that the operation might harm relations with the USA during the preparations for the ‘Overlord’ invasion of Normandy in June 1944. A reply from the Foreign Office indicated that ‘Tabarin’ reflected not any US failure to recognise British claims to the territory, but a reassertion of British territorial claims against the possibility of future Argentine and Chilean incursions.