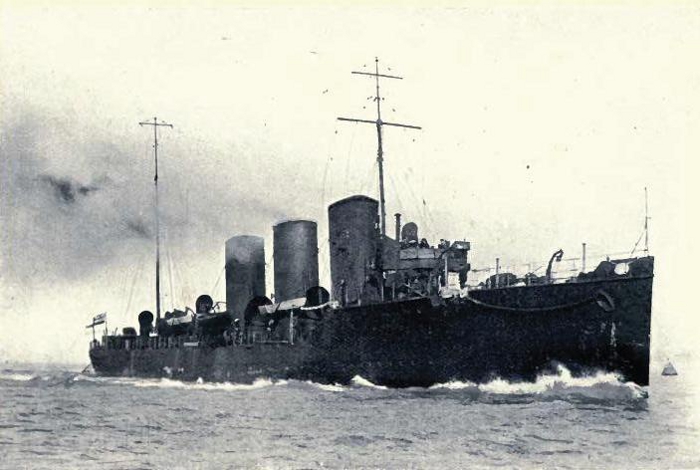 When the locomotive torpedo became a practical weapon from 1868, most navies thought it only sensible to start the process of building flotillas of fast torpedo-armed vessels, whose role was initially seen as coast defence, which they were to accomplish by threatening the battle fleets of any potential invader. Such was the perceived threat of the torpedo boat in the minds of many senior naval officers, who feared for the survival of the battleship fleets that were several nations’ most important military assets, that a rival and comparable effort was soon launched for the design and construction of ships possessing the speed and firepower to intercept and destroy torpedo boats before these smaller vessels had closed to torpedo-launch range of their battleship targets. This anti-torpedo boat role demanded a speed at least comparable with that of the torpedo boat as well as a primary armament of quick-firing guns plus a small complement of torpedo tubes (replaceable by additional quick-firing guns as and when required) so that the type could also be used as a torpedo boat.

Torpedo boat destroyer
The first of these torpedo boat catchers, a designation soon changed to torpedo boat destroyers, were launched in the UK in 1886. The ships lacked the speed to intercept their prey, however, and it was only in 1892 that the Admiralty took the plunge in a decisive way, ordering no fewer than 42 ‘turtleback’ torpedo boat catchers from a number of yards that were given considerable discretion about the manner in which they fulfilled the Admiralty’s basic requirement for a given armament, triple-expansion steam engines and a speed of 27 kt. The first of these generally successful ‘A’ class torpedo boat destroyers were ordered from Yarrow as the Havock and Hornet with triple-expansion steam engines powering two shafts for a speed of 26 kt with an armament that comprised one 12-pdr and three 6-pdr guns as well as three 18-in (457-mm) torpedo tubes that could be replaced by two more 6-pdr guns.

The two vessels and their successors quickly revealed a superiority over the torpedo boat proper so marked that the earlier type was soon discontinued in favour of rapid development and construction of the torpedo boat destroyer, a designation soon trimmed to destroyer, as a dual-purpose type capable of undertaking torpedo attacks on the enemy’s fleet and protecting its own fleet against the torpedo attack of enemy vessels. These early destroyers were capable of speeds in the order of 26 or 27 kt, although a lengthening of the hull and the installation of more powerful engines soon allowed the creation of improved destroyers with a speed in the order of 30 kt, and 60 of these improved torpedo boat destroyers were ordered for later allocation to the ‘B’, ‘C’ and ‘D’ classes depending on their use of four, three and two funnels respectively.

Perhaps the single most decisive moment in the development of the early destroyer came in 1897, when the Hon. Charles Parsons produced his Turbinia as a private boat to prove the capabilities of his steam turbine propulsion arrangement. So impressive was the performance of this privately funded experimental vessel that the Royal Navy switched to the steam turbine for its latest destroyers, starting with the Viper that was completed in 1900 with a speed of 33.75 kt on a light displacement of 344 tons with a four-shaft steam turbine propulsion arrangement. Whether powered by triple-expansion or later by turbine engines, these and other early destroyers were capable of reaching their legend speed only under ideal conditions, however, and higher speeds in anything but a smooth sea made the vessels very wet and rendered the forward guns all but unworkable.

Greater size
By the early 1900s, therefore, the British and other navies had decided that greater size was inevitable and also desirable: a longer and slightly beamier hull would permit the introduction of more powerful engines so that a high speed could be maintained under adverse conditions, and it would also make possible the adoption of a raised forecastle so that wetness forward would be reduced and the forward guns could be fought under most operational conditions. The way was paved by the German ‘S90’ class in which a raised forecastle replaced the turtledeck for improved seaworthiness, and the British responded with the 34 units of the ‘River’ or ‘E’ class with considerably greater displacement and a far more seaworthy basic design matched by a more powerful propulsion arrangement and greater bunkerage for the all-important improvement of seaworthiness and range. The ships were built in a large number of subvariants by different yards to a standard that included a full-load displacement of some 620 tons, a propulsion arrangement of triple-expansion steam engines delivering some 7,000 hp (5220 kW) for a sustained speed of 25.5 kt, and the same armament as the smaller 30-kt vessels, although from 1906 this was increased to four 12-pdr guns and two 18-in (457-mm) torpedo tubes.

Completed in 1907, the Swift can be seen as a portent of things to come for the ship was designed and constructed as a flotilla leader with a displacement of 1,850 tons, an armament of four 4-in (102-mm) and one 2-pdr guns as well as two 18-in (457-mm) torpedo tubes, and a speed of 39 kt on the 50,000 hp (37280 kW) delivered to four shafts by steam turbines. The Swift’s size served not only to improve seaworthiness, but also to allow the provision of room for the flotilla commander and his staff and their equipment without intrusion into the ordinary working of the ship.

Classes of identical ships
All these early destroyers had provided both builders and the Royal Navy with considerable experience in the design and operation of destroyers, and the sensible decision was now taken to concentrate on the introduction of classes of identical ships at the rate of between 16 and 24 ships per year. The first of these groups was the 16-strong ‘Basilisk’ or ‘G’ class completed in 1909 and 1910 with a displacement of between 885 and 965 tons, an armament of one 4-in (102-mm) and three 12-pdr guns as well as two 18-in (457-mm) torpedo tubes, and a speed of some 27 to 28 kt on the 12,500 hp (9320 kW) delivered to three shafts by steam turbines supplied from coal-fired boilers, which were adopted in what initially appeared to be a retrograde move but in fact reflected British fears that supplies of oil from the Middle East might be interrupted in the event of war. As a result of their propulsion arrangement these ships were comparatively slow by the standards now becoming accepted for destroyers, but on the other side of the tactical coin the ships were very seaworthy, which allowed them to maintain a higher speed in conditions that would have forced smaller and less seaworthy destroyers to trim their speed.

The following ‘Acorn’ or ‘H’ class, of which 20 were completed in 1910 and 1911, was somewhat smaller with a displacement of 780 tons, but was capable of a speed between 27 and 30 kt on the 13,500 hp (10065 kW) delivered to three shafts by steam turbines supplied from oil-fired boilers, which now became a standard feature of British destroyers. The armament was two 4-in (102-mm) guns and, for the first time in British destroyers, two 21- rather than 18-in (533- rather than 457-mm) torpedo tubes. Each ship was built in an average time of 18 months, a rate considerably faster than earlier types, and this reflected the Germans’ claim that they were building large numbers of destroyers in a unit time of between 12 and 15 months.

The last two destroyer classes introduced before the outbreak of World War I in 1914 were the ‘Acasta’ or ‘K’ class and the ‘L’ class, the latter pioneering the new British system of naming in which all the ships of a given class had names starting with the same letter. The ‘Acasta’ class was completed in 1912 and 1913, and comprised 12 standard ships, six ships with a different armament disposition and a two- rather than three-shaft propulsion arrangement, and two prototypes for the two- and three-funnel versions of the following ‘L’ class. The standard version had a displacement of 780 tons, an armament of two 4-in (102-mm) guns and two 21-in (533-mm) torpedo tubes, and a speed of between 27 and 30 kt on the 13,500 hp (10065 kW) delivered to three shafts by steam turbines. The ‘L’ class was the definitive version of the British destroyer in the period leading up to World War I, and totalled six two-funnel and 16 three-funnel ships that introduced a raked rather than vertical stem, twin torpedo tube mountings and a ‘bandstand’ mounting for the amidships gun. The basic data for these ships included a displacement between 965 and 1,070 tons, an armament of three 4-in (102-mm) and one 2-pdr guns as well as four 21-in (533-mm) torpedo tubes, and a speed of between 29 and 31 kt on the 22,500 to 24,500 hp (16775 and 18265 kW) delivered to two shafts by steam turbines.

World War I
As World War I broke out in August 1914, the first of the new ‘M’ class destroyers were coming into service as improved versions of the ‘L’ class ships with a displacement in the order of 994 to 1,042 tons, an armament of three 4-in (102-mm) and one 2-pdr guns as well as four 21-in (533-mm) torpedo tubes, and a speed of 34 kt (often exceeded by a considerable margin) on the 25,000 hp (18640 kW) delivered to three shafts by steam turbines. The ‘M’ class was deemed to be very successful and was also comparatively simple to build and outfit, and was therefore constructed in very large numbers during World War I. The overall total was 112 ships, which was so great that the Admiralty ran out of suitable names beginning with ‘M’ and therefore gave many of the ships names beginning with N, O and P as well as a few with names starting with R and T.

As evident from the earlier design and construction of the Swift, the Royal Navy appreciated that effective control of destroyer flotillas demanded the use of flotilla leaders with the additional size to carry a flotilla commander and his staff, but had only the Swift at the beginning of the war. The service was fortunate, however, that four powerful flotilla leader class were under construction in British yards for Chile and Turkey, and these were taken over as the ‘Botha’ and ‘Talisman’ classes for completion in 1914-15 and 1916 respectively. In the latter year there appeared the first new leaders built specifically to British specification, and these were the seven and six units of the ‘Marksman’ and ‘Later Marksman’ classes respectively, supplemented in 1917 and 1918 by the three ships of the ‘Shakespeare’ class and the eight ships of the ‘Scott’ class that were alternatively known as the ‘Thornycroft’ and ‘Admiralty’ types respectively.