The cancellation of the ‘Montana’ class battleships in 1943 pushed back the combat debut of the 5-in (127-mm) L/54 gun to 1945, when it was introduced on the US Navy’s ‘Midway’ class aircraft carriers, which each carried 18 such gun in single mounts. The gun proved adequate for carrier air defence, but was gradually phased out of carrier use as a result of its weight: the gun defence of carriers then passed wholly to the other ships within the carrier battle group.

For the first time since the construction of the ‘Iowa’ class, the US Navy was not building a fast battleship class solely for the purpose of escorting aircraft carriers operating in the Pacific, so the ‘Montana’ class ships were not designed for the primary task of escorting fast carrier task forces. Even so, they were schemed with a strong array of dedicated light anti-aircraft guns to protect themselves and other ships (principally the US aircraft carriers) from Japanese fighters and dive-bombers.

The 20-mm Oerlikon cannon was produced in very large numbers during World War II for aircraft and anti-aircraft use: the USA alone manufactured 124,735 such cannon. When brought into service during 1941, these cannon replaced the 0.5-in (12.7-mm) Browning M2 machine gun on a one-for-one basis. The Oerlikon cannon remained the primary light anti-aircraft weapon of the US Navy until the introduction of the 40-mm Bofors gun in 1943. The Oerlikon cannon was an air-cooled weapon based on the blowback recoil system so, unlike other automatic guns employed during World War II, the Oerlikon cannon’s barrel did not recoil, and the breechblock was never locked against the breech and is moving forward as the cannon fired. The weapon lacked a counter-recoil brake, as the force of the counter-recoil was checked by recoil from the firing of the next round.

Between December 1941 and September 1944, 32% of all Japanese aircraft downed were credited to this weapon, which reached its greatest success level in the second half of 1942, when it was credited with 48.3% of all the Japanese aircraft shot down. The revolutionary Mk 14 sight was introduced in 1943, and made these cannon still more effective. The 20-mm cannon were found to be ineffective against the Japanese kamikaze attacks used during the latter half of World War II, however, and were then phased out of service in favour of the heavier 40-mm Bofors guns.

“While there certainly were those who were willing to volunteer to die for emperor and country, and many more willing to die in this way simply because they felt, somewhat correctly, that they were the last line of defense to protect their families and friends at home, in truth many seem to have simply been pressured into it.”

The 40-mm Bofors gun was used on almost every major warship in the US and UK fleet from 1943. Though a descendant of German, Dutch and Swedish designs, the Bofors mounts used by the US Navy during World War II had been significantly Americanised to bring the guns up to US Navy standards. This resulted in a guns system fixed to British standards with interchangeable ammunition to simplify logistics. When coupled with hydraulic drives and the Mk 51 director for improved accuracy, the 40-mm Bofors gun was devastating against shorter range air targets, and was credited with about half of all Japanese aircraft shot down between 1 October 1944 and 1 February 1945. 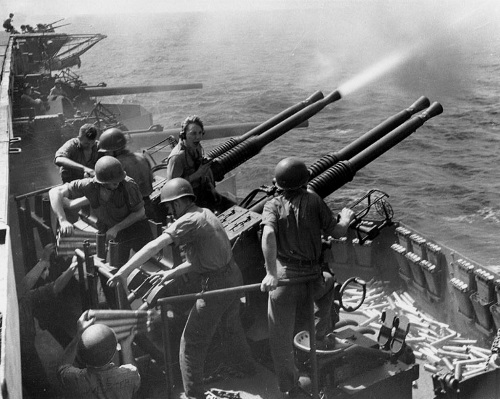 Until the authorisation of the ‘Montana’ class, all US battleships were built within the size limits imposed by the ability to transit the Panama Canal. The main reason for this was logistical: the largest US shipyards were located on the USA’s eastern seaboard, but the nation had territorial interests in both the Atlantic and Pacific oceans, and the ability of battleships to transit the Panama Canal obviated the need for such ships to make a lengthy passage round Cape Horn. By the time of the Two Ocean Navy act, the US Navy had come to appreciate that ship designs could no longer be limited by the Panama Canal, and so approved the ‘Montana’ class knowing that the ships could not transit the canal. This shift in policy meant that the ‘Montana’ class would have been the only US battleships of the World War II period to be armoured adequately against guns of the same power as their own. 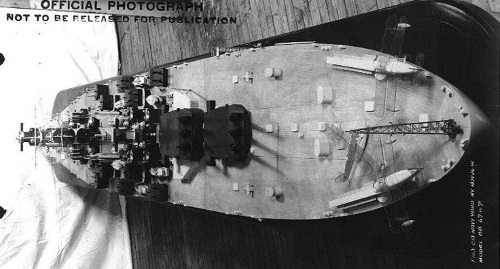 Like other major US warships of the period, the ‘Montana’ class ships were designed to use floatplanes for reconnaissance and gunnery spotting, with a secondary task of recovering downed aircrew. The type of aircraft used would have depended on when the battleships were commissioned, but in all probability the aircraft would have been either the Vought OS2U Kingfisher or Curtiss SC Seahawk. Three or four such aircraft were to have been carried for launch by two catapults and recovery by crane after alighting on the water.

The standard complement was to have been in the order of 2,355 men rising to 2,789 men as a flagship.