The ‘Montana’ class of battleships planned by the United States Navy were schemed as successors to the ‘Iowa’ class ships, but reverted to a more traditional concept inasmuch as they were slower but larger, better armoured and more heavily armed. Five such ships were approved for construction in World War II, but a major change in priorities meant their cancellation in favour of the ‘Essex’ class aircraft carriers and ‘Iowa’ class battleships before any had been laid down. With a beam of 121 ft 2 in (36.93 m), the ships would have been the first US battleships too wide to transit the Panama Canal, whose locks could accommodate a beam of 110 ft 0 in (33.53 m). The main armament was planned as 12 16-in (406-mm) Mk 7 guns in four triple turrets, representing a 33.3% increase over the ‘Iowa’ class ships. With increased anti-aircraft firepower and thicker belt armour, the ‘Montana’ class would have been the largest, best-protected and most heavily armed US battleships ever conceived.

Preliminary design work for the ‘Montana’ class began before the US entry into World War II: the first two vessels were approved by the Congress in 1939 following the enactment of the 2nd Vinson Act in the previous year, and though another three units were later authorised, the Japanese ‘Ai’ attack on Pearl Harbor delayed construction, and the success of carriers in the Battles of the Coral Sea and Midway in 1942 greater decreased the value of the battleship.

The US Navy therefore opted to cancel the ‘Montana’ class in favour of more urgently needed aircraft carriers as well as amphibious and anti-submarine ships. The orders for the ‘Iowa’ class ships were retained as these battleships were fast enough to escort the new ‘Essex’ class aircraft carriers.

As the political situation in Europe and Asia worsened and made World War II all but inevitable, Carl Vinson, the chairman of the House Committee on Naval Affairs, instituted the Vinson Naval Plan to upgrade the US Navy after the cutbacks imposed by the ‘Great Depression’ and the two London naval treaties of the 1930s. Within this context the US Congress passed the 2nd Vinson Act, which opened the way for construction of the four ‘South Dakota’ class fast battleships and the first two of four ‘Iowa’ class fast battleships. Four more battleships were approved in 1940 as another two ‘Iowa’ class and first two ‘Montana’ class ships. By 1942, it was apparent to the US Navy that it needed as many fast battleships as possible, and another two ‘Iowa’ class ships were approved.

Knowing of the Japanese construction of two ‘Yamato’ class super-battleships, the US Navy had been working on a 58,000-ton super-battleship concept since 1938. With a primary armament of 12 16-in (406-mm) guns, this was given the name Montana and authorised for construction by the US Congress under the Two-Ocean Navy Act of 1940, with funding approved in 1941. The ‘Montana’ class ships were the last battleships ordered by the US Navy, and were at first to be designated BB-65 to BB-69: BB-65 and BB-66 were subsequently re-ordered as the ‘Iowa’ class Illinois and Kentucky, so the ‘Montana’ class ships were redesignated as BB-67 to BB-71. The completion of the ‘Montana’ class and the last two ‘Iowa’ class battleships was intended to give the US Navy a considerable advantage over any other nation, or probable combination of nations, with a total of 17 new battleships by the late 1940s.

Preliminary planning of the ‘Montana’ class battleships took place in 1939 at a time when the aircraft carrier was still considered strategically less significant than the battleship. The US Navy began designing a 65,000-ton battleship to counter the threat posed by the ‘Yamato’ class battleships in the Pacific Ocean. Although the US Navy knew little about the two new Japanese battleships, these were believed to have a primary armament of 18-in (457-mm) guns. US plans were at first drawn for a 45,000-ton battleship, but the Battleship Design Advisory Board later increased the displacement to 58,000 tons. 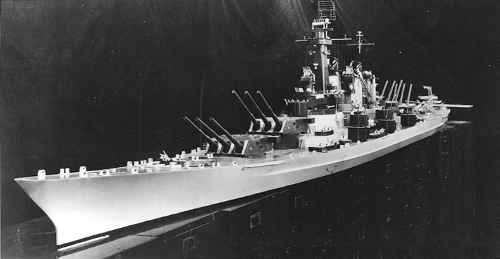 At the time, the design board issued a basic outline for the ‘Montana’ class calling for it not to be limited to the beam restrictions imposed by the Panama Canal, but to be 25% stronger offensively and defensively than any other battleship completed or under construction, and be capable of withstanding the 2,700-lb (1225-kg) shells used by US battleships equipped with either the 16-in (406-mm) L/45 Mk 6 or L/50 Mk 7 guns. However, the length and height of the ‘Montana’ class ships were limited by one of the shipyards at which they were to be built: the New York Navy Yard could not handle the construction of a 58,000-ton ship, and vessels built there had to be low enough to pass under the Brooklyn Bridge at low tide.

After debate about whether the ‘Montana’ class should be fast, equalling the 33 kt of the ‘Iowa’ class, or be more powerfully armed and protected, firepower was preferred to speed. By fixing the speed of the ‘Montana’ class at the 28 kt figure of the ‘North Carolina’ and ‘South Dakota’ class ships, the design team was able to increase the ‘Montana’ class’s protection to the level at which they could withstand fire equivalent to their own guns’ ammunition. This limited the ‘Montana’ class’s ability to escort and defend the aircraft carriers used in the Pacific campaign as the ships were to be powered by eight Babcock & Wilcox boilers delivering steam to four sets of geared turbines for a speed of 27 to 28 kt.

By January 1941, the design limit for the new battleship class had been reached, and most of those responsible for the design wished to increase the displacement to support the ships’ weapons and protection. At the same time, planners decided to adopt a slightly greater length and reduce power for a better machinery arrangement, as well as improving internal subdivisions, and selecting as the secondary armament several 5-in (127-mm) L/54 dual-role twin mounts in place of the 5-in (127-mm) L/38 guns used on the ‘Iowa’ class. Thus the basic scheme for the ‘Montana’ class was not dissimilar to that of the ‘Iowa’ class inasmuch as the ships of both classes would have the same main gun calibre and similar secondary gun calibre: however, the ‘Montana’ class had more armour, mounted three more main guns in one more turret, and were 22 ft (6.7 m) longer and 13 ft (4.0 m) wider than the ‘Iowa’ class.

By April 1942, the ‘Montana’ class design had been approved, and the projected date of completion was estimated to be somewhere between 1 July and 1 November 1945. The US Navy ordered the ships in May 1942, but the class was then postponed as the ‘Iowa’ class battleships and ‘Essex’ class aircraft carriers were under construction in the yards in which the ‘Montana’ class was to be built. Both the ‘Iowa’ and ‘Essex’ classes had by now been allocated a greater priority, the ‘Iowa’ class as it was fast enough to keep up with and defend the ‘Essex’ class carriers with 40- and 20-mm guns, and the ‘Essex class for its ability to launch aircraft to gain and maintain air supremacy over the islands in the Pacific and to intercept and destroy Japanese warships. The whole of the ‘Montana’ class was suspended in May 1942, before any of the keels had been laid, and on 21 July 1942, the construction of the ‘Montana’ class was terminated after the Battle of Midway and the corresponding shift in naval warfare from surface engagements to air supremacy and a corresponding shift from battleships to aircraft carriers.

The five ‘Montana’ class ships (Montana, Ohio, Maine, New Hampshire and Louisiana) were to have been built at the New York Navy Yard, Philadelphia Navy Yard and Norfolk Navy Yard.

Thew ‘Montana’ class’s armament was to have been similar to that of the ‘Iowa’ class, but with an increase in the number of primary and secondary guns for use against surface ships and aircraft. In the event that they had been completed, the ‘Montana’ class ships would have been the most powerful battleships the USA had constructed, and the only US battleship class that would have come close to matching the Japanese ‘Yamato’ class in displacement, armament and protection.

The primary armament schemed for the ‘Montana’ class was 12 16-in (406-mm) L/50 Mk 7 guns carried in four three-gun turrets installed as two forward and two aft. The guns were the same as those of the ‘Iowa’ class battleships, with a length of 66 ft (20.12 m) from breech face to the muzzle. Each gun weighed about 267,900 lb (121519 kg) with its breech. The gun fired projectiles weighing up to 2,700 lb (1225 kg) at a muzzle velocity of 2,690 ft (820 m) per second for a range of up to 48,600 yards (44440 m) at a flight time of almost 90 seconds. The presence of the No. 4 turret would have given the ‘Montana’ class the accolade of carrying the heaviest broadside: 32.400 lb (14697 lg) as opposed to the ‘Yamato’ class’s 28,800 lb (13064 kg). Each gun would have rested within an armoured barbette, but only the top of this would have protruded above the main deck: the barbettes would have extended to a depth of four decks (turrets nos 1 and 4) or five decks (turrets nos 2 and 3). The lower spaces would have contained rooms for storing and handling the projectiles and the bagged powder charges used to fire them. Each turret would have needed a 94-man crew, and would not have been attached to the ship instead rested on rollers.

Like most World War II battleships, the Montana class would have been equipped with a fire-control computer, in this case the Ford Mk 1A Ballistic Computer, a 3,150-lb (1429-kg) rangekeeper designed to direct gunfire on land, sea, and in the air. This computer was of the analogue type and used to direct the fire from the battleship’s larger-calibre guns, taking into account factors such as the bearing and speed of the target, the time it took for the projectiles to travel to the target, and the effects of aerodynamic drag on the shells during their flight. At the time the ‘Montana’ class was about to enter construction, the rangekeepers could accept radar data to help target enemy ships and land-based targets. The results of this advance were telling: the rangekeeper was able to track and fire at targets at a greater range and with increased accuracy. This provided the US Navy a major tactical advantage as the Japanese did not develop radar or automated fire control to the level of the US Navy.

The 16-in (406-mm) could fire either of two different types of shell: an armour-piercing round for anti-ship and anti-structure work, and a high-explosive round designed for use against unarmored targets and shore bombardment. The Mk 8 APC (Armour-Piercing, Capped) shell weighed 2,700 lb (1225 kg) and was designed to penetrate the hardened steel armour protecting target ships: at a range of 20,000 yards (18288 m), the Mk 8 shell could penetrate 20 in (508 mm) of armour plate or, at the same range, 21 ft (6.40 m) of reinforced concrete. For use against unarmored targets and for shore bombardment, the 1,900-lb (862-kg) Mk 13 HC (High-Capacity) shell was available: this could blast a crater 50 ft (15.2 m) wide and 20 ft (6.1 m) deep upon impact and detonation, and could defoliate trees 400 yards (365 m) from the point of impact.