The M45 quadruple machine gun mounting was a weapon mounting with four 0.5-in (12.7-mm) Colt-Browning M2HB (heavy barrel) L/90 heavy machine guns in the form of M2 Turret Type weapons mounted in vertical pairs on each side of the gunner’s electrically open cab. The M45 was developed by the W. L. Maxson Corporation in 1942 as successor to the same manufacturer’s current M33 twin mounting. Although designed as a short-range anti-aircraft weapon, the M45 also proved very effective against many types of ground targets including massed infantry, trucks and lightly armoured vehicles. Introduced to service in 1943 and manufactured until 1953, the M45 mounting remained in US service as late as the Vietnam War. 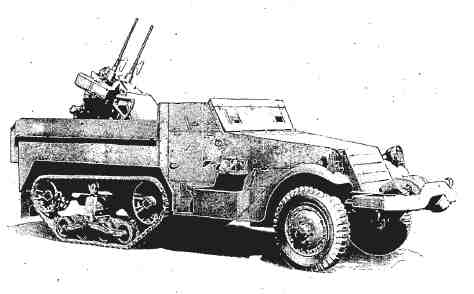 Even as production of the two multiple gun motor carriage variants was underway, work had commenced on a development which doubled the mounting’s firepower. The revision of the M33 to take four machine guns created the M45 mounting.

Together with the 40-mm Bofors gun, the M45 became the principal weapon of the mobile anti-aircraft artillery battalions deployed by the US Army during the WWII the European theatre. It was used primarily for the defence of larger units, especially field artillery, against both air and surface attack. Through a combination of their overall firepower, and the fact that the four machine guns could be harmonised to converge on a variable single point, the M45 units served as a potent deterrent to low-level air attacks. Multi-gun mounts were developed for the M2 machine gun because the weapon’s rate of fire, varying between 450 and 550 rounds per minute, was deemed too low for effective anti-aircraft use.

The M45 was employed until 1945 as a land-based weapon, particularly during the German land offensive in the Ardennes in December 1944/January 1945. Although the Allies had achieved air supremacy by the time of the invasion of Normandy in June 1944, German air attacks were still a threat as fighter-bombers could approach and attack at low altitude and then quickly escape. At Oppenheim, when the Allies were gathering to make a massive push after crossing the Rhine river in March 1945, the German deployed 248 warplanes in an effort to destroy the bridge. However, massed US anti-aircraft artillery battalions shot down 30% of the attacking force, mainly with M45 mountings – preventing the bridge’s destruction.

The M45 was combined with two towed mounts, namely the M20 light single-axle trailer, to create the M55 Machine Gun Trailer Mount. The heavier M17 tandem-axle trailer was based on a searchlight platform to create the M51 Multiple Machine Gun Carriage. These mounts could be towed by any 4×4 light truck. In firing position, the equipment was lifted on three jacks, comprising one at the front and two at the rear of the trailer. This allowed the removal of the two wheels before the mounting was lowered onto the ground to provide a stable firing platform. 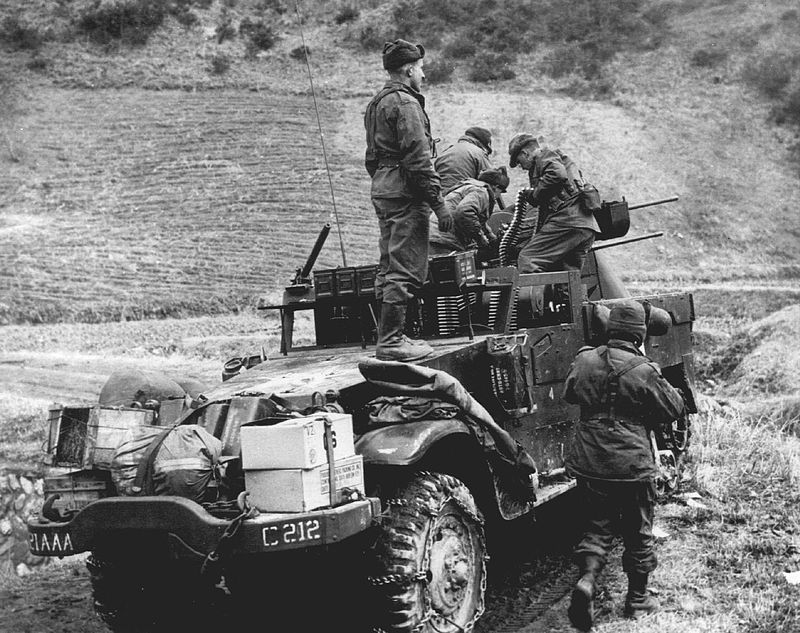 The M45 mounting was operated by one gunner in a semi-armoured cab, fitted with an M18 reflex sight and two loaders. The mounting could be traversed through 360° and elevated through an arc of 100° between -10° and +90°. The traverse and elevation movements were both electrically driven at the rate of 60° per second, power being provided by two 6-volt batteries which were recharged by a small petrol-powered generator. All four guns could be fired at once, but it was more common for the gunner to alternate between the upper and lower pairs of guns. This allowed the barrels of one pair to cool while the other was in use, and thus opened the way for more extended periods of action as the overheating of the gun barrels was reduced.

There was also a Lysam M55 (Modernised) version of this simple system. Evolved as a kit in Brazil by Lysam Industria e Comercio de Maquinas e Equipamentos, it had modern 12-volt electrics, whose batteries were charged by a 5- or 6-hp (3.73- or 4.47-kW) Montgomery M-226 or M-252 petrol engine. Other improvements aimed to increase reliability and maintainability in modern conditions. The modernised equipment was otherwise similar in capabilities and performance to the original model, though the traverse and elevation rates were significantly improved to more than 90° per second – as required for any real capability against fast-crossing targets. The company also trialled a self-propelled version on the chassis of the Bernardini XIA light tank.

Lysam has also produced a version with a pair of 20-mm Hispano-Suiza HS 404 cannon, each with 160 rounds of ammunition, in place of the four 0.5-in Browning machine guns. In this latter guise the Brazilian development was similar in many respects to the Israeli TCM-20 mounting, itself developed from the M55 with two HS 404 cannon. 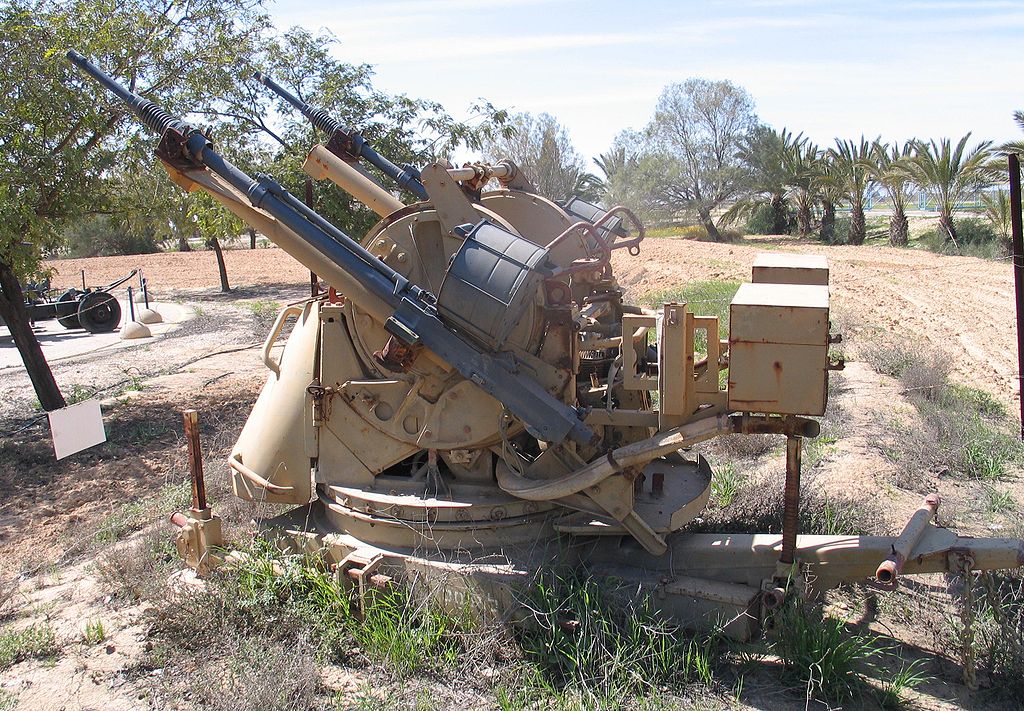