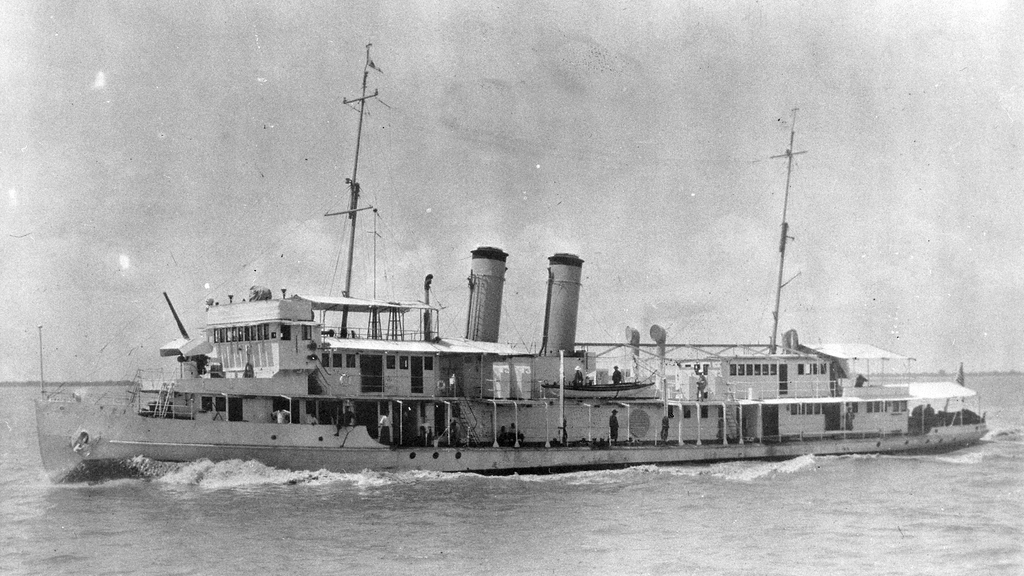 A number of European powers, the USA and Japan maintained flotillas of these shallow-draft river gunboats to patrol the larger rivers with which China abounds, enforcing these nations’ concessionary rights under the terms of treaties which China had been compelled to sign in the period after her defeat during the 1st Opium War (1840/42) with the UK. The combination of steam power, shallow draft and comparatively powerful armament in these vessels meant that the new European vessels totally outclassed anything which the Chinese could operate at the time.

In their desire to extort advantageous trading positions vis-à-vis China, the foreign powers had in effect coerced from China concessions such as extraterritoriality for their citizens in China, and the gunboats were used to police these rights.

The first non-European nation to gain treaty rights was the USA, which gained concessions in Shanghai on the Yangtze River Delta and Tianjin and the northern end of the Grand Canal, which links with the Yellow and Yangtze rivers. Over a period of some 80 years, the US Navy then operated gunboats of varying age, design, size and overall utility. The earliest such craft made brief forays up some of the larger rivers between 1861 and 1901, but were rarely allocated to any permanent patrol structure. In 1901 two large gunboats, the 1,290-ton Helena with a crew of 170 men and the 1,570-ton Wilmington with a crew of 212 men, were assigned to the Asiatic Squadron’s so-called 2nd Division as permanent river patrol vessels. The two were too large to be able to patrol deep inland, but remained in service until 1932 and 1923 respectively. In 1903 Spanish gunboats, captured in the Philippine islands group during the US/Spanish War of 1898, were adapted for the riverine role in US service and placed in service for patrols which took them farther up the Yangtze River toward Chungking: the 620-ton Elcano with a crew of 103 men and the 350-ton Villalobos with a crew of 50 men served until 1928, when they were decommissioned and sunk. The 240-ton Callao and 350-ton Quiros, which was a sister ship of Villalobos, served until 1916 and 1923 respectively.

In 1914 a pair of 204-ton patrol craft of British design were built at Mare Island Naval Shipyard, then disassembled and shipped to China for reassembly in Shanghai. These vessels were Palos, which patrolled until 1934 before being relegated to become the station vessel at Chungking, and Monocacy, which patrolled until 1939. Each manned by 47 men, the two vessels carried an armament of two 6-pdr guns and six machine guns, and possessed a maximum speed of 13.25 kt on the 800 shp (596.5 kW) provided by their vertical triple-expansion steam engines to two shafts.

The Yangtze Patrol was established in 1922 as a element of the US Asiatic Fleet, and the new patrol was allocated six new vessels designed and built in Shanghai during 1928. The new vessels were of three different sizes. The 380-ton Guam and Tutuila, each with a crew of 60, were able to steam up and down the whole navigable length of the Yangtze River at any time of the year. The 450-ton Panay and Oahu, each with a crew of 65, and the 560-ton Luzon, with a crew of 82 men, were too large for such a round-the-year capability, and were deemed ‘May–September’ gunboats as they could patrol completely upriver only during these high-water months. (Luzon’s sister ship, Mindanao, served on the China coast but not in the river patrol.) Except for Panay, which was sunk by Japanese aircraft on 12 December 1937, the newer ships served in China until a time late in 1941. 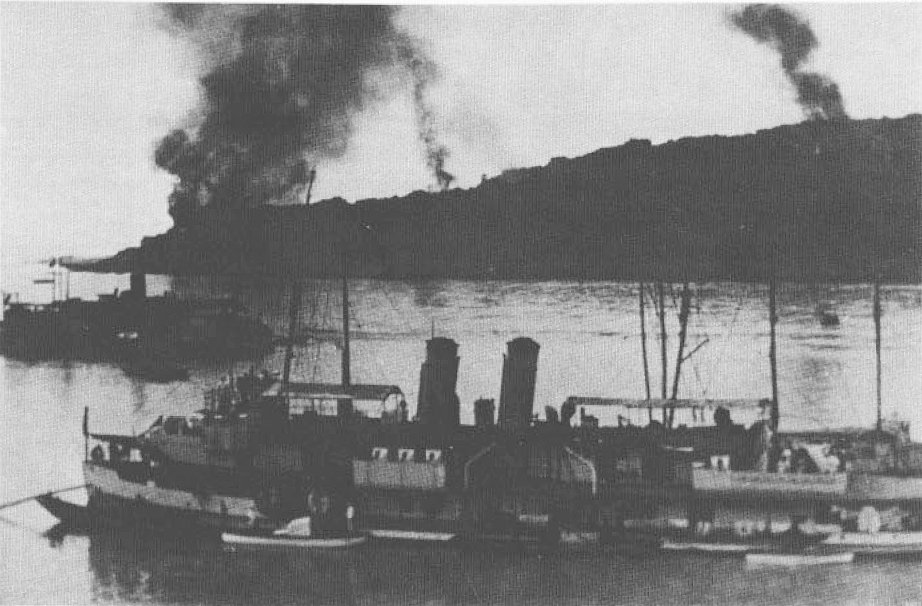 The best known of the vessels as a consequence of her loss as a neutral during the 2nd Sino/Japanese War, Panay was built by the Kiangnan Dockyard and Engineering Works in Shanghai and launched on 10 November 1927 for commissioning on 10 September 1928.

Designed and built for service on the Yangtze River, Panay was tasked primarily with the protection of US lives and property, which were frequently threatened in the disturbances that ripped through China during the 1920s and 1930s as this Asiatic giant struggled to modernise, create a strong central government and finally attempt to fight Japanese aggression. Throughout Panay’s service, movement up and down the Yangtze river was constantly menaced by bandits and outlaws (the latter were mostly disaffected soldiers who had deserted), and Panay and the other US gunboats helped to provide protection for US shipping and nationals.

Detachments from Panay were often used as armed guards on US steamers plying the Yangtze River. In 1931 Panay’s commanding officer reported that being fired on from the banks was to be expected as a matter of routine by US shipping and gunboats, but also that the Chinese seemed to be so indifferent in their marksmanship that his vessel had not yet suffered any casualties.

As the Japanese moved through southern China, US gunboats evacuated most of the embassy personnel from Nanking during November 1937. Panay was assigned as station ship to guard the remaining Americans and take them off at the last moment, which she did on 11 December, bringing the number of persons on board the gunboat to five officers, 54 enlisted men, four US embassy staff and 10 civilians, including six news men. In an effort to avoid involvement in the fighting around the doomed Chinese Nationalist capital, Panay and three US merchant tankers steamed up the river, and the senior Japanese naval commander in Shanghai was informed of the four ships’ movement both before and after the fact.

On 12 December warplanes of the Imperial Japanese Navy’s air arm were ordered to attack any and all ships on the Yangtze River above Nanking. Knowing of the presence of Panay and the merchant vessels, the Japanese navy requested verification of the order, which had been issued by the Japanese army, and received the verification before beginning the attack at about 13.27 on the same day. Panay was flying several large US flags and had another painted above the superstructure, but the Japanese warplanes pressed home their attacks regardless. Panay was hit by two of the 18 132-lb (60-kg) bombs dropped by three Yokosuka B4Y bombers and was also strafed by nine Nakajima A4N fighters. The bombing continued until Panay sank at 15.54. One man of the US Navy and two civilians were killed, and another man of the US Navy died of his wounds during the night which followed. Some 43 sailors and five civilians were wounded.

The US ambassador immediately lodged a formal protest, and while it accepted responsibility, the Japanese government insisted that the attack had not been made deliberately, claiming that the pilots could not distinguish between Chinese and US flags from the distance from which the warplanes attacked, which was in fact only some 300 yards (275 m). An indemnity of about US$2 million was paid, and this officially settled the incident on 22 April 1938, though the entire episode rankled deeply in the minds of the US government and people, and marked another step in the worsening relationship between the USA and Japan. 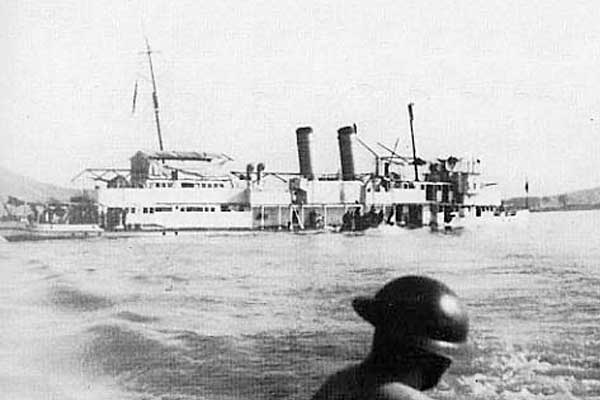