Even as it was developing its Model 248 prototype into the production-standard Model 266 that would secure fame in service with the US Army Air Corps as the P-26A ‘Peashooter’, the Boeing Airplane Company was only too aware of the fact that its new fighter should be regarded at best as an interim type, for although it pioneered the low-wing monoplane configuration in USAAC service, it nonetheless retained a number of obsolescent feature such as a wire-braced wing, open cockpit, and fixed tailwheel landing gear even though this last was refined aerodynamically by the use of large ‘pant’ fairings over the wire-braced main units. For this reason, therefore, Boeing decided that it would undertake as a private venture, although with a large measure of USAAC support, a more advanced fighter prototype, and this improved type was allocated the company designation Model 264. This was clearly related to the Model 266 in conceptual and structural terms as a single-seat monoplane with a low-set wing and all-metal construction, and also possessed the same powerplant and basically the same fuselage and tail unit. Where the new type differed from the Model 266, however, was in its enclosed cockpit, cantilever wing, and tailwheel landing gear with main units that retracted rearward into the undersurface of the wing leaving the lower half of each wheel exposed. 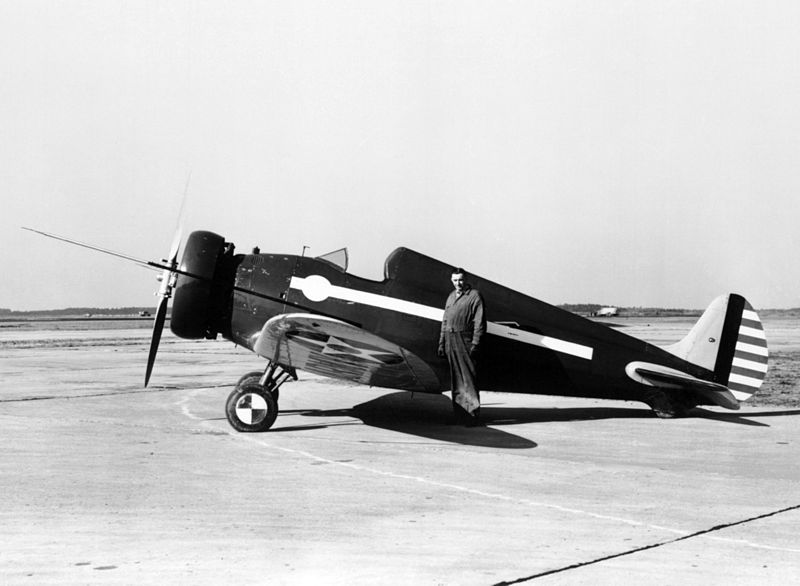 The core of the new fighter was the fuselage, which was of Duralumin semi-monocoque construction and basically oval section that became circular at the nose and closed to a vertical knife-edge at the tail. From from to back, this fuselage carried the engine, oil tank, pilot in a cockpit enclosed by a narrow canopy of the framed type with a section that slid back over the rear framing and dorsal turtleback to provide a means of access and egress, and tail unit. This last was a cantilever unit with single horizontal and vertical surfaces: the horizontal surface comprised a tailplane carrying plain elevators, and the vertical surface comprised a fin carrying a plain rudder hinged at its lower end to the vertical knife-edge in which the fuselage terminated. The low-set wing was of semi-elliptical planform, and was based on a flat centre section of constant thickness and chord, and this carried the main landing gear units and the dihedralled outer panels, which were each tapered in thickness and chord and had an aileron occupying virtually the full span of its trailing edge. The airframe was completed by the semi-retractable tailwheel landing gear.

The powerplant was based on one Pratt & Whitney R-1340-31 air-cooled nine-cylinder radial engine rated at 475 hp (354 kW): installed at the front of the fuselage inside a circular cowling of the long-chord NACA type, this drove a two-blade Hamilton Standard propeller.

The first aeroplane was built as a private venture and recorded its maiden flight on 20 January 1934. Only five days later the aeroplane was flown to Wright Field, Ohio, for evaluation by the USAAC with the experimental designation XP-940. After undertaking limited trials, the service concluded that while the new prototype might not be suitable as an operational type, it did point the way to the future, and therefore agreed to buy the machine as well as purchase two more examples. 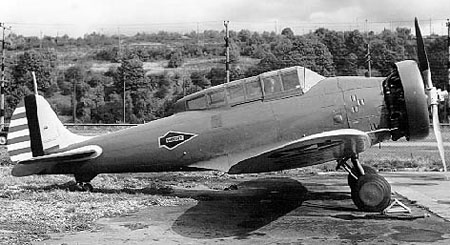 The YP-29 was the first of the two new aircraft ordered by the USAAC, and was completed to a standard this differed from that of the Model 264 in its revised tailwheel (with an oleo shock-absorption unit), cockpit enclosure and uprated powerplant. The cockpit of the Model 264 had been criticised for its narrowness, and the YP-29 therefore featured a wider ‘glasshouse’ enclosure that was also longer and ended above a cut-down rear fuselage lacking the turtledeck rearward extension of the pilot’s headrest that had been so pronounced a feature of the Model 264. The powerplant was revised to one R-1340-35 engine rated at 600 hp (447.5 kW) at 10,000 ft (3050 m).

Trials revealed that the new cockpit enclosure offered the pilot a decidedly improved working environment, but the degradation of the take-off and landing performance in both the Model 264 and YP-29, as a result of a wing loading considerably higher than that of current biplane fighters, resulted in the USAAC’s decision to have the YP-29 revised with a one-piece split flap on the inboard sections of the wing’s trailing edges and extending right across the underside of the fuselage. In this form the aeroplane was used for a number of development and experimental tasks, including trials with controllable-pitch propellers, and was eventually accorded the revised designation P-29.

All three aircraft eventually proved useful in a number of development and experimental tasks after initial consideration of a P-29A production version had been abandoned as a result of the fact that while the type was somewhat faster than the P-26A it had a lower service ceiling and poorer levels of agility.