Introduced in 1958, the General Dynamics RIM-2D(N) Terrier naval surface-to-air missile was the nuclear-armed version of the RIM-2D air defence SAM, and was the last of the series to remain in US Navy service before the whole family was replaced by the RIM-66/RIM-67 Standard Missile series based on essentially the same airframe. The Terrier was developed to provide US surface combatants with a SAM for total defence of carrier battle groups against major air threats, and also possessed a powerful surface-to-surface capability out to the radar horizon. The original launcher for Terrier was the Guided Missile Launcher (GMLS) Mk 4, but latterly the GMLS Mk 10, again a twin-arm launcher with an under-deck magazine holding 40, 60 or 80 reload rounds depending on the size of the launch vessel. 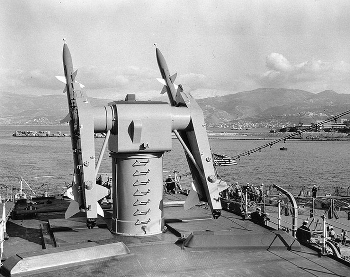 The Terrier was the first production result of the US Navy’s fantastically advanced ‘Bumblebee’ programme, perhaps the single most important research and development programme in the history of guided missiles, with direct results in the form of the Terrier, Tartar and Standard Missile systems, and ancillary spin-offs in a number of other weapons. The US Navy’s first experiments into SAM technology had resulted in the Little Joe and Little Lark missiles in the latter stages of World War II. These experimental weapons generated a considerable data base for future work, but were in themselves unsuitable for adoption as operational missiles. It also became clear during tests of these two pioneering systems that entire new research fields needed to be opened and tapped, and in 1944 the US Navy contracted the Applied Physics Laboratory of the Johns Hopkins University at Baltimore in Maryland to investigate a defence system against kamikaze attack using SAMs, and in 1945 this baseline contract was expanded to cover research and development of hardware for a supersonic SAM able to handle all current and anticipated air threats. The programme was soon divided into two major fields (guidance and propulsion), and enormous strides were made in both, with knock-on effects still applicable today. The ‘Bumblebee’ programme also brought in academic, industrial and technological contractors as its Section T, and this relationship was perpetuated in the use of T as the first letter of the resulting missiles: Talos, Tartar, Terrier, Triton and Typhon, of which the first three entered service. The most important industrial concerns brought into the programme as airframe contractors were Consolidated Vultee (Convair) and McDonnell, and as propulsion contractors Bendix (ramjets), M. W. Kellogg (solid-propellant rockets) and the Allegany Ballistics Laboratory (solid-propellant rockets).

The two earliest concrete results of the ‘Bumblebee’ programme were the Talos ramjet-powered long-range missile and the Terrier rocket-powered medium-range area-defence missile. The programme that led to the Terrier missile began in 1949, when the US Navy contracted with Convair for the tactical prototype of a beam-riding area defence missile with a solid-propellant sustainer rocket and a tandem solid-propellant booster. The first round was delivered in January 1950 and test fired in February. Other examples proved the general success of the design, downing a number of drones using the prototype target-tracking and missile beam-riding guidance system developed by Sperry and Reeves with significant inputs from Western Electric in the guidance section. The stabilised twin-arm launcher was produced by Northern Ordnance.

The Korean War broke out soon after flight trials had began, and the baseline technology-demonstration programme suddenly became an operational programme controlled by the Pomona Division of Convair (later General Dynamics). The ships earmarked for conversion into the first missile cruisers were the USS Boston and Canberra, and the space available for the missile system on these sister ships established the norms that are still valid in US missile ships with arm launchers. The Terrier finally matured as a fairly compact system that could be fitted on the large destroyers that began to supplement the smaller cruisers in the 1950s. The initial version intended for production was the missile which received the company designation Terrier BW-0 (Beam-riding, Wing-controlled, model 0), which was fired for the first time in 1951 and successfully destroyed a target drone for the first time in 1953. This weapon was designated SAM-N-7 by the US Navy (with variations on this theme for later models), and retrospectively designated RIM-2A in the tri-service rationalisation of designations effective from October 1962. The missile had a substantial HE warhead, and its performance included a maximum speed of Mach 1.8, a maximum range of 20,250 yards (18515 m) and minimum/maximum altitude limits of 5,000/50,000 ft (1525/15240 m). The missile had a tandem configuration with an Allegany Ballistics booster and a Kellogg sustainer, a cruciform of fixed tail surfaces, a cruciform of moving mid-body wings, with compressed-air power for control, indexed at 45° to the tail and a proximity-fused FRAG-HE warhead. The missile and booster had the diameters retained throughout the Terrier (and for that matter the Tartar) families, while the missile was 14 ft 10 in (4.521 m) long and the booster 12 ft 3 in (3.734 m) long for an overall length of 27 ft 1 in (8.255 m). The span was greater than that of later variants, at 3 ft 10 in (1.168 m), and the launch weight was 2,900 lb (1315 kg).

The Terrier BW-0 showed itself generally satisfactory, but was clearly troubled by the design problems and production deficiencies inherent in first-generation weapons. Changes were made in successive Terrier BW-0 production blocks, but these only eased the situation without getting to the core of the problems. The opportunity was therefore taken to revise the weapon as the Terrier BW-1 (RIM-2B) with roughly the same performance but incorporating a number of significant design and engineering changes, centred principally on internal repackaging, to remedy failings and ease production of this baseline missile, which was intended for use only against subsonic non-manoeuvring targets. Costs were reduced and production rates rose, allowing the Terrier BW-1 to achieve initial operational capability in June 1956 on board the missile cruiser Canberra, her sister ship Boston following in November of the same year. The two ships each mounted two GMLS Mk 4 twin-arm launchers. Each launcher was located above a 72-round magazine that turned with the launcher, which could be elevated to 90° to allow the hydraulic loading of a vertically stowed reload missile, initial target detection was provided from the parent ship’s main sensor system, with target tracking and missile guidance entrusted to the SPQ-5 that had begun to mature as an effective electronic system in about 1954. A pair of SPQ-5 systems was installed on each of the two converted cruisers, which also pioneered at a slightly later date the Lockheed SPS-43 B-band long-range air-search and RCA SPS-30 E/F-band 3D and height-finding radars that became standard with the Terrier installation. Later in Terrier’s service life the associated radar became the Sperry SPG-55, a J-band equipment often installed in pairs associated with each launcher to allow the tactically advantageous simultaneous engagement of two targets.

As noted above, the Terrier BW series was limited in real terms to defence against subsonic non-manoeuvring targets. Yet by the mid-1950s it was clear that US Navy ships would soon be faced with the problem of dealing with supersonic manoeuvring targets, and the Terrier programme was transformed to produce a missile capable of matching the threat. This emerged as Advanced Terrier, otherwise known as the Terrier 2 and, in the company designation system, the Terrier BT-3 (Beam-riding, Tail-control, model 3). As indicated by the revised designation, the most important revision in the creation of the new missile was to the aerodynamic surfaces. The cruciform of moving wings was shifted to the tail and the surfaces were altered in planform; and the wings’ erstwhile position was assumed by a cruciform of very low-aspect-ratio strakes indexed in line with the tail surfaces. The result was a missile of markedly improved manoeuvrability. Other performance increments resulted from the use of a solid-propellant auxiliary power unit for increased control power over a longer flight time, an improved autopilot, and higher-impulse solid propellants. The result was a missile that could be retrofitted onto unmodified Terrier BW systems yet provide a 50% greater engagement envelope with a maximum speed of Mach 3, a maximum range of 30,375 yards (27775 m) and a maximum altitude of 75,000 ft (22680 m). Terrier BT-3 was produced from 1956 and in 1962 was redesignated as the RIM-2C. The missile was produced in large numbers, eventually equipping 39 US Navy warships, as well as one Dutch and three Italian cruisers.

However, at about the time Terrier BT-3 was entering production, successful trials with prototype weapons against low-flying aircraft persuaded the US Navy and Convair that comparatively little modification would be required to provide the basic weapon with greater combat versatility by the addition of a surface-to-surface capability. Further trials validated the basic concept, indicating that a longer-range missile would have greater air defence capability as well as the proposed surface-to-surface capability, and require only modest modifications to the shipboard direction system. The result was the Terrier BT-3A, first fired in 1958 and redesignated as the RIM-2D in 1962. A longer-burning charge was added to the auxiliary power unit so that this latter would function adequately to the full range of 40,500 yards (37035 m) provided by the new Allegany Ballistics end-burning sustainer. This virtually doubled the range of the missile, and a further improvement was the replacement of the original beacon/receiver by a transistorized unit for improved links between the missile and shipboard guidance system. The surface-to-surface role was further enhanced by the development of the W45 1-kiloton nuclear warhead to arm the Terrier BT-3A(N) variant, which in 1962 received the service designation RIM-2D(N). 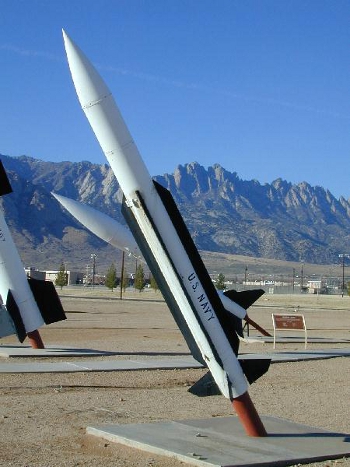 While these later models of Terrier were under development, Convair had also been working on a boosterless and thus lighter variant designed as the armament of smaller warships. This was the RIM-24 Tartar with a dual-thrust rocket and continuous-wave semi-active radar guidance offering a performance envelope somewhat greater than that of Terrier despite its lack of a booster.

By 1957 the Tartar had matured to the stage at which its advantages were fully evident, and it was decided to fit Tartar’s guidance system into the Terrier airframe to produce a weapon with higher single-shot kill probability and superior performance at low level. The result was the Terrier HT-3 (Homing Terrier, model 3), which entered service one year earlier than the Terrier BT-3A and was in 1962 redesignated as the RIM-2E. Higher terminal accuracy improved single-shot kill probability by a very useful 30%, while the use of earlier Terrier as well as Tartar hardware reduced development cost and helped to streamline production, with consequent advantages in building rate and service reliability. The Tartar programme had seen the introduction of the Raytheon SPG-51 G-band missile-control radar, and a development of this radar, the G/H-band pulse-Doppler Sperry SPG-55, was used for the Terrier HT-3.

The early 1960s was a period of great progress in electronics, and to give the US Navy full advantage of these developments the Homing Terrier Retrofit programme was launched. Within this programme many in-service weapons were returned to Pomona to be retrofitted with a number of important revision packages. These were often based on new solid-state electronics, and improved the RIM-2E’s resistance to electronic counter-measures, guidance reliability in the surface-to-surface role, and multiple-engagement capability. Missiles were often cycled through Pomona two or three times to provide the full retrofit improvements, and these were also included in the last Terrier production version, basically the Terrier HT-3 fitted with an upgraded sustainer and further-extended auxiliary power unit to boost range to a maximum of 46 miles (74 km): introduced in 1963, this RIM-2F variant was a conventionally armed surface-to-air missile with an overall length of 26 ft 2 in (7.976 m), a weight of 3,090 lb (1402 kg) and propulsion comprising an Atlantic Research Mk 30 Model 2 solid-propellant booster rocket and a Naval Ordnance Station Indian Head Mk 12 Model 1 (later Thiokol Mk 70 Model 1) solid-propellant sustainer rocket. Production finally ended in 1966, by which time some 8,000 Terriers of all versions had been produced.