The world’s first operational infantry-carried SAM, and developed from July 1959 initially by Convair-Pomona, in an effort to provide US infantry units with a man-portable system, the General Dynamics FIM-43 Redeye surface-to-air missile entered service only in 1968 after a protracted development programme, and never proved entirely successful. This was a failing shared by many man-portable SAMs of the same basic period, the hindsight conclusion being that an effective man-portable weapon of this type was not really feasible within the technological constraints of the late 1950s and early 1960s. The type was notable for its comparatively short range, lack of any IFF (Identification Friend or Foe) capability, susceptibility to IR countermeasures of the simplest type, modest speed, and restriction to pursuit-only engagements. The last two factors meant that the Redeye could be used only against aircraft that had already overflown their targets and delivered their weapons, its comparatively low speed then making it all but impossible for the missile to catch a high-performance aircraft as it departed the scene.

In 1948 the US Army began considering new infantry air-defence weapons, as machine guns were ineffective against new fast jets. Several gun and rocket systems were investigated, but none of these was promising. In the mid-1950s Convair began studies of a man-portable missile with infra-red guidance, and in November 1956 the results of these studies were shown to the US Army and US Marine Corps. In 1957 official requirements were formulated, and in 1958 Convair was awarded a contract to start development of the system. It was in July 1959 that the full development programme began, and the first test rounds were fired in March 1960. Launches from a tube followed in May 1961, with the first shoulder launch taking place during 1961. Technical problems then prevented the missile entering full production: the missile did not meet its specification as it was slower, less manoeuvrable and less accurate than demanded. 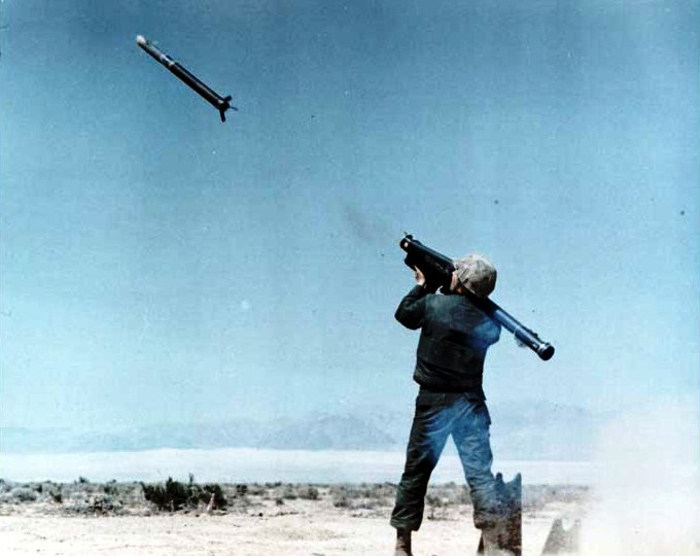 Slow development
Limited production of the missile began as the XM41 Redeye Block I, the missile was redesignated as the XMIM-43A in June 1963, and evaluation was undertaken between 1965 and 1966. There followed the XM41E1 Redeye Block II, whose development was launched in 1964, the missile being designated as the XMIM-43B. The first such missiles were delivered in April 1966, and included a new gas-cooled detector cell, a slightly redesigned launcher and an improved warhead.

In 1965/66 General Dynamics developed the definitive configuration, designated at first as the XM41E2 Redeye Block III with the XFIM-43C missile. The missile retained the seeker of the Block II missile, but included a new rocket motor, warhead and fuse, while the launcher unit now had an XM-62 open sight and upgraded electronics. The new missile could manoeuvre at up to 3g, and delivered a kill probability of 0.51 against Grumman F9F radio-controlled drones travelling at 495 mph (797 km/) at 330 ft (100 m). From this it was calculated that the kill probability against a Soviet Mikoyan-Guryevich MiG-21 ‘Fishbed’ at a similar altitude would be 0.403, and 0.53 against typical battlefield helicopters. The kill probability against larger propeller-driven aircraft such as tactical transports was estimated at 0.43.

Production of the Block III system began in May 1967, and the weapon was declared operational in 1968.

The Redeye was designed for the protection of forward-based units against low-altitude attack aircraft, and the standard allocation was four or six two-man teams (gunner and assistant gunner) constituting a Redeye section within each infantry, artillery and tank battalion.

Unguided rocket origins
The missile’s airframe was based on that of the 2.75-in (70-mm) Mk 4/Mk 40 FFAR unguided aircraft rocket, and most of the slim untapered cylindrical fuselage was occupied by the Atlantic Research dual-thrust solid-propellant motor. Forward of this were the impact-fused blast/fragmentation warhead, the guidance electronics that use a proportional-navigation system and, behind a hemispherical curved window, the IR seeker unit. The missile was stabilised by four folding rectangular fins at the tail, and controlled by a pair of curved-tip fins which flipped open just behind the nose immediately after the missile had left its launch tube. The missile was delivered as a no-maintenance round in its own sealed container, which had transparent forward closure that was covered by a protective cap until the missile was about to be fired, and served to keep the missile at a constant low humidity. For use the missile container was clipped to the M46 launcher/sight unit, whereupon the launcher battery/coolant unit was loaded into the cylindrical housing under the sight just forward of the gripstock. In this configuration the FIM-43 system weighed 28.9 1b (13.1 kg), and its dimensions included a length of 50.5 in (1.283 m), width of 4.7 in (0.119 m) and height of 10.9 in (0.277 m).

Once he had acquired the target visually, the operator activated the system and then had 30 seconds to complete the aiming and launching procedure. On activation, the launcher’s battery/coolant unit supplied electrical power to the missile and Freon coolant gas to the seeker. The operator acquired the target in the open sight attached to the missile tube, and when the seeker received sufficient IR energy to track the target, the operator was warned by an audible signal as the missile gyro was spun up to speed. The operator then uncaged the gyro with a left-hand thumb switch and fired the missile with the trigger on his gripstock. The booster stage of the rocket was ignited and its efflux impinged on the folded fins to spin the missile inside the launch tube. The missile was then driven through the forward cover and out the launcher at 28 g, and the fuse timer was initiated. The missile coasted to a point some 20 ft (6.1 m) ahead of the launcher before the sustainer was ignited, and 1.6 seconds into the flight the fuse was armed and the 15-second self-destruct mechanism was started. The seeker unit then detected any angular difference between the gyro’s line of sight and the source of IR radiation, reducing this to zero by commands passed to the two control fins.

The operator then discarded the empty container and replaced it on the launcher unit with another round.

Redeye variants
The original missile was the FIM-43A Redeye with the M99 motor, and before production of the system ended in September 1968 after the delivery of some 85,000 rounds, this had been supplemented by the FIM-43B Redeye upgraded version with the M110 motor, the FIM-43C Redeye with the more powerful M115 motor and designed for use with the M46A2 launcher rather than the M46A1 of the two earlier variants, and the FIM-43D Redeye further-developed version of the FIM-43C.

Some 50 Redeye systems were delivered in 1984 to the mujahideen by the USA during the Soviet war of occupation in Afghanistan in the 1980s, and in this war the missile was used to shoot down a number of aircraft including several Sukhoi Su-25 ‘Frogfoot’ close-support warplanes as well as Mil Mi-8 ‘Hip’ and Mi-24 ‘Hind’ helicopters. By November 1986 the Redeye had been largely replaced by the dramatically more successful FIM-92 Stinger missiles, and the type left service in 1995.

3 replies on “The Redeye – A pioneering battlefield missile”