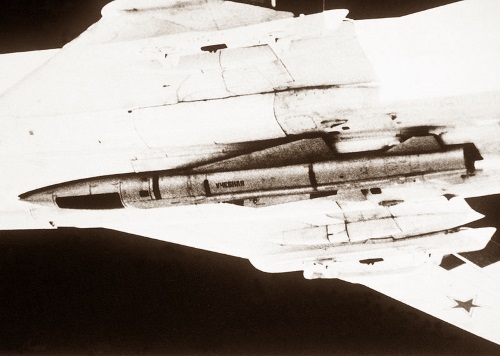 Succeeding the turbojet-powered Raduga KS-1 Komet and K-10S (AS-1 ‘Kennel’ and AS-2 ‘Kipper’) subsonic and supersonic missiles in the stand-off role against major surface forces, especially those centred on an aircraft carrier, the Raduga Kh-22 is known to NATO as the AS-4 ‘Kitchen’. This substantial long-range missile is still in service, and in an air-launched weapons which can carry either a conventional HE or nuclear warhead.

After undertaking and completing a major analysis of World War II’s naval battles and encounters (especially those involving the US Navy in the Pacific theatre), during the late 1940s and early 1950s Soviet military planners came to the conclusion that the era of the large naval battle had ended, and that the optimum method for the defeat of large naval task forces was the stand-off attack by missiles carried by large warplanes. In this manner, the planners decided, that the US Navy’s superiority in major offensive warships could be neutralised without the USSR having to build, equip, man and train a comparable capability.

Although the major powers in World War II had used aircraft, either land-based or carrierborne, to attack their opponent’s fleet, this meant that the aircraft had to undertake their tasks at very close proximity to their targets, and thus to come under attack by the fighters of the opponent’s combat air patrols, or otherwise have to penetrate the curtains of light, medium and heavy anti-aircraft fire, generally controlled by radar, lofted by the defending ships. Such attacks often suffered heavy losses, and the Soviets decided that the use of the stand-off or cruise missile would remove the need to approach the target task force to a dangerously close range. Thus the Soviets embarked on a major programme to adapt numbers of their heavy bombers into raketonosets (missile carriers) for deployment against approaching naval fleets and task forces from coastal or island airfields. 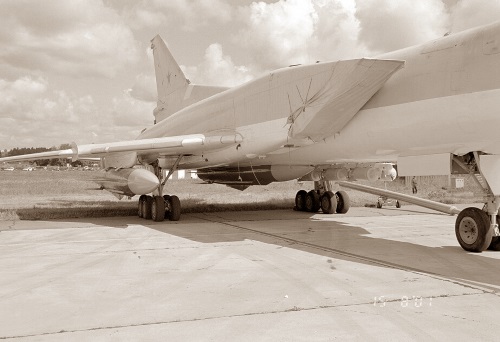 The Kh-22 was developed by the Raduga design bureau specifically for this task as the primary armament of the Tupolev Tu-22M-2 ‘Backfire-B’ supersonic strike bomber. The new missile was designed to provide altogether superior performance, especially in speed, than its predecessors, and was thus based more closely on ‘missile’ rather than ‘aeroplane’ thinking, with much cleaner aerodynamic lines (although still of basically aeroplane configuration) and rocket propulsion. 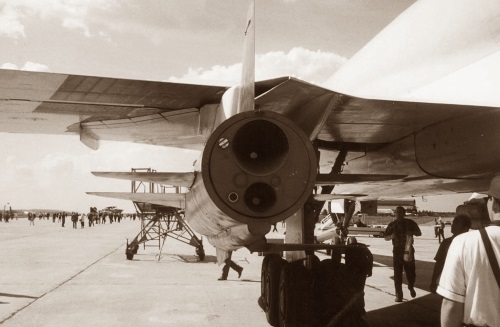 The missile can be fitted with either a 2,205-lb (1000-kg) RDX conventional explosive warhead or a nuclear warhead possessing a yield of between 300 kilotons and 1 megaton. Trials revealed that the detonation of the shaped-charge conventional warhead created a hole almost 16 ft 6 in (5.0 m) in diameter and 39 ft 4 in (12.0 m) deep.

The first operational examples of the Kh-22 became available in 1962 and equipped with the Tu-22M-2, although the type can also be used by the Тu-22K and Tu-95K-22. The two initial production models with the baseline Kh-22 with the conventional warhead and the Kh-22N with the nuclear warhead, but in the middle of the 1970s these were supplemented by Kh-22P, which is an anti-radiation missile optimised to home onto and destroy radar installations. In the 1970s the Kh-22 variant was upgraded to the Kh-22M and Kh-22MA standards with new attack profiles, speed of up to Mach 5, range increased to 375 miles (600 km), a launch weight of 26,455 lb (12000 kg) and a data-link allowing mid-course updates of the guidance system.

The Kh-22E is the conventionally armed version for the export market, and the Kh-32 is a development for the Tu-22M-3 bomber with major improvements, alternative HE and nuclear warheads, an improved rocket motor and a new terminal guidance package.