The name Fritz-X was one of several applied to the German guided anti-ship bomb which was the world’s first precision-guided weapon, and the first to sink a ship in combat. Other names for this important weapon were Ruhrstahl SD-1400 X, Kramer X-1, PC-1400X and FX-1400. Together with the similar Azon weapon developed for the US Army Air Forces during the same period of World War II, it is one of the precursors of today’s anti-ship missiles and precision-guided weapons.

The Fritz-X was a development of the PC-1400 armour-piercing HE bomb, which the Germans had nicknamed Fritz. This was a penetration weapon for use against strongly protected targets such as heavy cruisers and battleships, and was a 3,086-lb (1400-kg) weapon of standard bomb configuration with a 661-lb (300-kg) filling of TNT and wax inside a tapered cylindrical casing of forged steel construction with walls 32 mm (1.75 in) thick, increasing 320 mm (12.6 in) in its nose section. The bomb was stabilised by a ring tail, 150 mm (5.9 in) deep, carried by four low-aspect ratio fins.

The Luftwaffe had come to appreciate the difficulty of hitting a moving and possibly manoeuvring warships during its involvement in the Spanish Civil War (1936/39). Dipl. Ing. Max Kramer, who worked at the Deutsche Versuchsanstalt für Luftfahrt, had been experimenting since 1938 with remote-controlled 250-kg (551-lb) free-fall bombs, and in 1939 the definitive layout emerged with a nose of more refined aerodynamic shape, four stub wings (not indexed at 90° to each other), and a box-shaped tail unit comprising an approximately 12-sided annular set of fixed surfaces, and a cruciform tail with thick surfaces within the annulus, which themselves contained the aerodynamic controls in the form of radio-controlled spoilers. In 1940, Ruhrstahl was invited to join the development effort as the company already possessed considerable experience in the development and production of unguided bombs.

Guidance was based on the Funkgerät (FuG 203) Kehl, which was a dual-axis package controlled by a single joystick. This radio-control transmitter was carried by the bomb-carrying aeroplane and used to send control signals to the Fritz-X, which was fitted with the FuG 230 Strassburg receiver. This sent the guidance signals to the movable solenoid-operated spoilers in the Fritz-X’s thick vertical and horizontal tail fin surfaces within the annular fin structure. The Strassburg receiver’s antennae were aerodynamically integrated into the trailing edges of the fin’s annular surfaces within a quartet of bulged trailing-edge sections. A dive brake assembly round the fins limited the terminal velocity to 1000 km/h (621 mph).

Trials confirmed that a minimum launch height of 4000 m (13,125 ft) was required to allow the weapon to accelerate to its maximum speed and to provide the weapon operator to acquire and guide the missile, but an altitude of 5500 m (18,045 ft) was preferable. A stand-off range of 5 km (3.1 miles) was also necessary. The operator had to keep the bomb in sight at all times (a tail flare was provided) and the launch bomber had to hold its course from the time of the bomb’s release to its impact, which made any evasion of anti-aircraft fire or fighters impossible.

The Fritz-X was controlled by surfaces on its tail unit, using three sets of aerodynamic control spoiler systems: inboard horizontal spoilers and vertical spoilers provided control in pitch and yaw, operating differentially and constantly oscillating under direct control of the Kehl/Strassburg radio-control link. Control in roll was independent of the guidance system, and used outboard spoilers which oscillated similarly to those of the guidance system: these spoilers were controlled by an internal gyroscope in the tail’s central housing to keep the ordnance level during its trajectory. The inboard set of spoiler surfaces in the tail’s horizontal surfaces, which incorporated a set of flat fences for airflow separation from the autonomous roll control spoilers, controlled the pitch angle after release and were controlled by the radio control link, giving the Fritz-X’s controller in the bomber the ability to control the range of the drop. The yaw-control spoilers housed in the vertical tail surfaces were also under control through the radio link, and had similar fences to guide airflow over them. All three spoiler surface sets, when deployed, barely protruded from the surface during operation, and the pitch- and yaw-control pairs of spoiler systems possessed some ‘proportionality’ in their operation by varying the dwell time spent on one side or the other during their rapid rate of oscillation from side to side when a control input was sent to them. 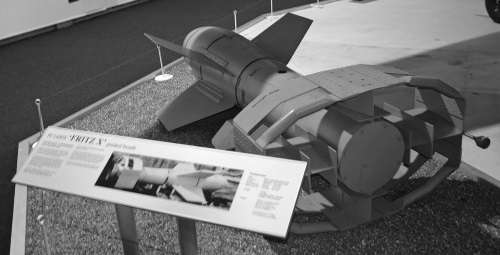 It was intended that the Fritz-X be used with the Heinkel He 177 bomber, but problems with the development of this bomber delayed its introduction to operational service, and the Dornier Do 217K-2 was therefore modified to take the Fritz-X. The Do 217K-2 could carry two of the bombs, one under each wing, as a maximum load, but its range was severely limited in this condition and the bomber normally carried one bomb only, mounted under the fuselage, to permit the use of a greater fuel load. The bomb was dropped conventionally, using the Lofte 7D sight, but after launch, the bomber pilot reduced his speed and climbed to enable the bomb aimer to follow the fall of his missile with the bomb sight. From the normal dropping altitude of 7000 m (22,965 ft), the bomb took 42 seconds to reach its target, the bomb aimer having it under control for all but the first 15 seconds. The task of the bomb aimer was to steer the bomb so that the image of the flare in its tail and the image of the target, as seen in his sight, always coincided. The maximum correction of course with this system was 500 m (545 yards) in range and 350 m (385 yards) in bearing.

The only Luftwaffe unit to deploy the Fritz-X was the III Gruppe of Kampfgeschwader 100. This unit used the Do 217K-2 medium-range bomber on almost all of its attack missions, though in a few cases toward the end of the Fritz-X’s operational career, the Do 217K-3 and Do 217M-11 variants were also used. A few special variants of the troublesome He 177A long-range bomber were equipped with the Kehl transmitter and racks to carry the Fritz-X, and it is believed that this combination might have seen limited combat service.

The Fritz-X was first deployed operationally on 21 July 1943 in a raid on Augusta harbour in Sicily after the Allies’ ‘Husky’ landing on that island. A number of additional attacks around Sicily and Messina followed, though no confirmed hits were made and it appears the Allies were unaware that the large bombs being dropped were radio-guided weapons. On 9 September of the same year, however,, the Luftwaffe achieved their greatest success with the weapon after the signature of an armistice between Italy and the Allied powers. Under the terms of this armistice, the Italian fleet had to surrender its ships, and several major units steamed from La Spezia toward Malta and Tunisia. To prevent the ships from falling into Allied hands, six Do 217K-2 bombers, each loaded with a single Fritz-X, took off from a base in the south of France. The Italian battleship Roma, flagship of the Italian fleet, received two hits and one near miss, and sank after her magazines exploded, and while her sister ship, Italia, was also damaged, although she eventually managed to reach Tunisia.

Production of the Fritz-X, including development examples, reached some 1,400 bombs, and these were responsible for the sinking or damaging of many Allied warships and transports when about 100 were used operationally in the Mediterranean Sea, Atlantic Ocean and North Sea in an active career between 21 July 1943 and 30 April 1944.