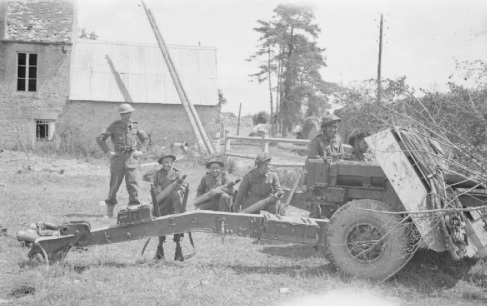 The Ordnance QF 17-pdr was a British anti-tank gun developed during World War II to succeed the Ordnance QF 6-pdr in the same role. Though the weapon was used primarily as an anti-tank gun on its own carriage, it was also used as the main gun of several British tanks and was also used to ‘up-gun’ some foreign-built vehicles in British service – most notably, the US M4 Sherman medium tank in order to create the Sherman Firefly. Accurate and hard-hitting, this weapon was the most effective Allied anti-tank gun of the war and, when firing APDS (Armour-Piercing Discarding Sabot) shot, was able to defeat all but the thickest armour of Germany’s late-war tanks.

Even before it entered service, the British predicted that the 57mm 6-pdr anti-tank gun would soon become redundant, as the Germans were at the same time increasing the armour thickness of their tanks. Late in 1940, the British therefore started the process of creating a replacement, and the design of the new 76.2-mm (3-in) weapon had been largely completed by the end of 1941.

A prototype production line was created, and when the PzKpfw VI Tiger I heavy tank appeared in North Africa, the first 100 prototype weapons were quickly shipped to North Africa to counter this new threat. So highly expedited was this process that the guns were despatched before proper carriages had been developed, and the guns were therefore mounted on the carriages of 25-pdr gun/howitzers to create a type known as the 17/25-pdr Pheasant. This first saw action in February 1943. The fully developed 17-pdr started on its own carriage entered production in 1943 and saw its first operational use in the Italian campaign of 1943/45.

Given the fact that it offered a level of performance superior to all other Allied armour-piercing guns, the 17-pdr was a natural candidate for adaptation as a tank-mounted weapon. Few current tanks were capable of carrying such a large a gun because of the small diameter of their turret rings: it was planned that a 75-mm (2.95-in) gun under development by Vickers would be used for tanks, but this did not enter service.

The British also planned a tank to carry the 17-pdr. Based on the Cromwell which was then under development, it soon ran into problems in the modification process meant that the result, the Cruiser Tank Mk VIII Challenger, was delayed and relatively few were produced. However, the British devised a conversion for the M4 medium tank to take the 17-pdr and the resulting Sherman Firefly was rushed into service in time for the ‘Overlord’ invasion of Normandy in June 1944.

The ordnance was a modified design produced specifically for the Sherman Firefly, with the carriage-mounted weapon rotated 90° to lie on its side in the Sherman Firefly’s turret. An additional box was welded to the back of the turret to accommodate the radio equipment, which had to be relocated to provide clearance of the ordnance’s breech and recoil. Eventually about half of Sherman tanks in British service were of the Sherman Firefly pattern. 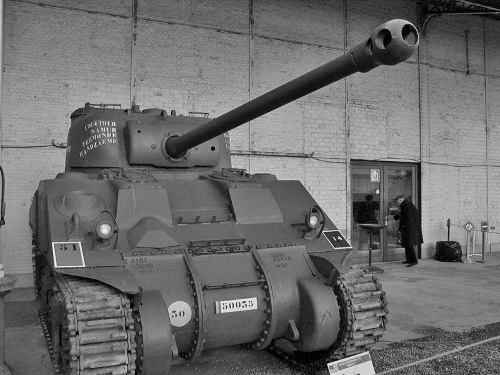 The British also converted some of their US M10 tank destroyers, replacing the original 3-in (76.2-mm) gun with the 17-pdr to create the 17-pdr Achilles (otherwise 17-pdr M10). The 17-pdr gun was also successfully trialled on the Australian Sentinel tank, though no tanks equipped with this gun entered Australian service.

The 17-pdr variants were the Mk I initial production variant; Mk II for tank use with no carriage mountings and the muzzle brake replaced by a counterweight, though the muzzle brake was reintroduced in March 1944 with the introduction of the APDS shot; Mk III Royal Navy adaptation intended for landing craft use and generally similar to the Mk I but with an automatic loader; Mk IV tank adaptation for the Sherman Firefly with a different breech with the block opening to the side rather than down to take up less room; Mk V version of the Mk IV with different mounts to allow it to replace the US 3-in (76.2-mm) in the 17-pdr Achilles; Mk VI adaptation of the Mk IV; and Mk VII similar to the Mk VI but with a revised breech.

The British also created a gun of the same calibre but small enough to be accommodated in the current generation of tank designs, most especially the Cromwell cruiser tank which was currently being designed. The gun was designed to fire US 75-mm (2.95-in) AP shot and HE shell but at higher velocity. This L/50 gun, firing a 75-mm (2.95-in) projectile attached to a necked down 3-in (76.2-mm) anti-aircraft gun cartridge by means of a modified breech, was the Vickers HV 75 mm. This achieved a higher muzzle velocity, and hence improved armour penetration, through the use of a greater propellant charge. Although the 75 mm HV was a promising weapon, it proved to be too big for the Cromwell tank, which was fitted with the normal 75-mm (2.95-in) gun as other British tanks. When the Comet, schemed as the Cromwell’s successor, was being designed, the 75 mm HV was reworked to fire the same projectiles as the 17-pdr through a shortened 17-pdr barrel, but retaining the 3-in (2.95-in) cartridge firing from a standard 3-in (76.2-mm) breech. This has the benefit of greater ease of use on tanks, many of which would not have sufficient turret space to accommodate the breech length and recoil distance of the 17-pdr. To prevent confusion over ammunition supplies, the revised weapon was given the designation 77 mm HV, and was used in the Comet tank. 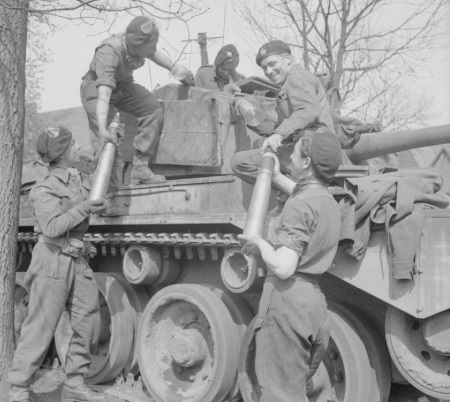 A HE shell was initially developed for the 17-pdr, but this lacked power because the use of a high-powered cartridge meant that the shell walls had to be thicker to stand the stresses of firing, which reduced the volume left available for explosive. Reduction of the propellant charge for the HE shell allowed the use of a thinner-walled and more powerful shell carrying 15.4 lb (6.99 kg) of explosive.

A considerably bulkier and heavier weapon than the 6-pdr, the 17-pdr had to be towed by a tractor such as the Morris Quad, M3 Half-track or the Crusader, as it could not effectively be moved by its gun crew alone, especially on poor ground. When used on soft ground, the 17-pdr had often to be pulled out of the ground as the recoil buried the trail spades.