The MiG-15bis upgraded single-seat fighter, known to the Mikoyan-Guryevich as the Samolyet SD, was made feasible by the development of the VK-1 engine, which was derived from the RD-45 at GAZ-117 under the leadership of Klimov with a 30% increase in airflow without any enlargement of the overall dimensions and weight. This improved engine therefore possessed mountings and connections similar to those of the original unit, and though it was not regularly retrofitted in aircraft designed for the RD-45, could be installed in a development of the MiG-15 with few engine bay changes. The design bureau took the opportunity once again to revisit the airframe, which was further rationalised, stiffened and strengthened in 12 places to permit the attainment of Mach 1.0 in a dive. The ailerons were subjected to a measure of redesign, and were now driven by irreversible hydraulic power units rather than boosters. The air brakes were also redesigned once more, and were now controlled by a switch on the control column. The leading edges of the elevators and rudder were redesigned, and the elevator balance was increased by 22%. Further changes included an emergency pneumatic system (using compressed air bottles) to lower the flaps in the event of an engine failure and consequent loss of hydraulic power, further strengthening of the wing skinning, addition of knife-edge stall strips on each inboard leading edge, and improved cockpit pressurisation and additional hot-air feeds to items including the windscreen, which was reportedly proof against cannon shells up to a calibre of 64 mm (2.5 in). The armament was left unaltered, but trials were undertaken of a system in which formations of MiG-15bis fighters released large numbers of 22 lb (10 kg) OFAB-10 fragmentation bomblets and parachute flares from underwing dispensers against bombers at an altitude of 39,370 ft (1200 m) at the command of the formation’s leader. There were also new connectors for the pilot, these including those appropriate for the PPK-1 anti-g suit. From 1953 a proportion of the aircraft scheduled for night and adverse-weather operations were fitted with the OSP-38 instrument landing system. Finally there were a host of trial installations, one of these being a 161.46 sq ft (15.00 m²) brake chute intended to provide an improved short-field capability.

The Samolyet SD prototype recorded its maiden flight in September 1949 with the VK-1 powerplant as well as some of the new features, but the MiG-15bis did not supplant the MiG-15 in production until a time early in 1952. Like the MiG-15 and MiG-15UTI, the MiG-15bis was also licensed for manufacture in Czechoslovakia (620 examples of the S-103) and Poland (LiM-2), and Soviet-made aircraft were exported to more than 12 countries. The NATO reporting name was still ‘Fagot’. The MiG-15 was widely exported, communist China receiving the MiG-15bis model in 1950. 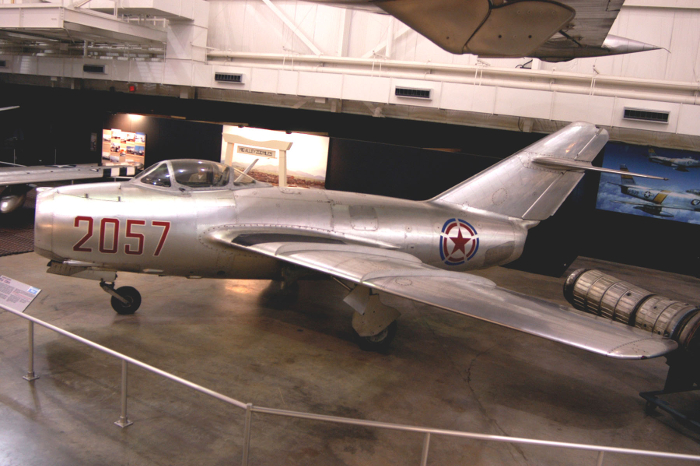 Large-scale combat service
Chinese MiG-15 fighters took part in the first jet-versus-jet dogfights after communist North Korea’s invasion of South Korea in the Korean War (1950/53). The swept-wing MiG-15bis quickly proved superior to the first-generation straight-winged jet-powered fighters of the United Nations air forces, such as the Lockheed F-80 and Gloster Meteor, as well as piston-engined North American F-51 Mustang and Vought F4U Corsair fighters. Even so, it was an F-80 which achieved the first air-to-air ‘kill’ in an all-jet combat over a MiG-15. Only the North American F-86 Sabre with its highly trained pilots were a match for the MiG-15. Although the Sabre could not match the MiG-15 in some performance areas, superior tactics and pilot training allowed Sabre pilots to achieve high kill/loss ratios.

Eager to obtain an intact MiG-15 for thorough test and evaluation, the USA offered a reward of US$100,000 and political asylum to any pilot who would defect with his aeroplane, and eventually a North Korean pilot, Lieutenant No Kum-Sok, who claimed to be unaware of the reward, landed at Kimpo air base outside Seoul in September 1953, allowing the first detailed evaluation of the Soviet fighter. This MiG-15 was minutely inspected and was test flown by several test pilots including ‘Chuck’ Yeager, who reported in his autobiography that the MiG-15 had dangerous handling faults, and claimed that when he visited the USSR, Soviet pilots were incredulous that he had dived in it, this supposedly being very hazardous. However, when this story got back to the Soviet pilots to whom Yeager claimed to have spoken, they angrily denounced it as a lie. In fact, although the MiG-15 did have some handling quirks and, could, in principle, exceed flight limits in a dive, its air brakes opened automatically at the red-line limit, preventing it from going out of control.

Throughout the 1950s, MiG-15 fighters of the Soviet and Warsaw Pact air forces regularly intercepted USAF reconnaissance aircraft, shooting down several. MiG-15 fighters of the communist Chinese air force frequently engaged Taiwanese and US aircraft in combat, and in 1958, a Taiwanese fighter achieved the first air-to-air kill with an AIM-9 Sidewinder short-range AAM against a communist Chinese MiG-15. The MiG-15 also served with the Arab air forces during the 1956 and 1967 Arab-Israeli wars. The MiG-15 achieved an air-to-air kill on 13 June 1952, but this remained a secret for many years. Its victim was a Swedish air force Douglas DC-3 Sigint aeroplane flying over the Baltic Sea, and this event triggered the so-called ‘Catalina affair’ when a Consolidated Catalina flying boat sent out to search for the missing DC-3 was also shot down. The famous Soviet cosmonaut Yuri Gagarin died during a March 1968 training flight in a MiG-15UTI two-seat trainer: as a result of poor visibility and miscommunication with ground control, he flew his aeroplane into the ground.

Experimental models
As might be imagined for a type that was built in very considerable numbers, the MiG-15 family was further developed in several trials and experimental forms. One of the most important problems facing designers as aircraft began to approach Mach 1 was the achievement of stability and control at transonic speeds. V. P. Yatsyenko was allocated two MiG-15 airframes being built by GAZ-1 and these were completed to the Samolyet SYe (aeroplane, swept, unique) standard that was also designated LL (flying laboratory). The revised type was still basically a MiG-15, but the upper part of the vertical tail surface was hugely enlarged, chiefly to improve lateral control. The ailerons were also enlarged and modified, but not fitted even with hydraulic boosters, and extra skinning was added above the inboard portions of the wing. The first of these aircraft recorded its maiden flight in July 1949 in the hands of M. Tyuteryev, and in the subsequent trials programme the type attained Mach 0.985 on 21 September of the same year and, after aileron power units had been installed, Mach 1.01 on 18 October.

Early in 1949 the parent design bureau designed an airborne interception radar installation using the pioneering Torii equipment created by A. B. Slepushkin’s team. This installation was fitted to the 102nd aeroplane off the production line at GAZ-381 and recorded its maiden flight in December 1949 in the hands of Sedov. The aeroplane was known to the Mikoyan-Guryevich OKB as the Samolyet SP-1, and was also called the MiG-15Pbis (Perekhvatchik, or interceptor). Located in a radome above the nose after the S-13 camera gun had been shifted to starboard, the radar’s antenna was aimed by the pilot. A number of other equipment items were added, the 23-mm cannon were removed, the landing gear’s nose unit was modified, the wing’s anhedral was increased, the air brakes were enlarged and, uniquely on the aircraft of the MiG-15 family, the elevators were driven by power units of the same type used in the aileron-control system.

During 1951 five examples of the MiG-15bisP were built at GAZ-1 as aids in the development of a less demanding radar and sight system that began to mature on the SP-2 version of the MiG-17. The RP-1 Izumrud (emerald) radar developed by V. V. Tikhomirov’s team was much superior to the Torii equipment, and was tested from a time early in 1950 in a MiG-15bis adapted to the Samolyet SP-5 standard: this installation had the tracking receiver in a radome fitted in the centre of the air inlet, and the search scanner in the upper lip of the inlet. The cannon armament and camera gun arrangements were the same as those in the Samolyet SP-1.

The MiG-15 Burlak (barge-hauler) was the result of an extraordinary programme undertaken in 1950. An air gun installed in the nose was used to fire a harpoon (carrying a steel towing cable) to catch a loop of cable extending behind a bomber from the tip of one wing to the other. The fighter then throttled back and the cable loop, disconnected from one side of the towing aeroplane, slid until the hooks on both cables mated, allowing the fighter to proceed as a towed glider until it reverted to powered mode over the target to disconnect from the bomber and protect it. The whole arrangement was fraught with difficulties, and the pilot of the fighter tended to freeze after he had switched off his engine.

Two other projects of the 1950s were the MiG-15bisS escort fighter and MiG-15bisR reconnaissance fighter. Both versions had an enlarged oxygen supply for missions whose endurance was boosted by the use of two 132 Imp gal (158.5 US gal; 600 litre) drop tanks. The MiG-15bisR also had provision for one or two AFA-40 cameras. Early in 1951, the Samolyet SU was used for the evaluation of new armament. This machine was a MiG-15 fitted with the V-1-25-Sh-3 system comprising port and starboard chin gondolas each housing one Shpital’nyi Sh-3 cannon with 115 rounds in a trunnion mounting that allowed the pilot to elevate both cannon in an arc from +11° to -7° via switches on the throttle and the stick. Trials indicated the need for greater angular movement, and this led to the SN version of the MiG-17.

The Samolyet SD-21 was a MiG-15bis tested early in 1951 with four underwing hardpoints for the carriage of two 55 Imp gal (66 US gal; 250 litre) slipper tanks outboard and two 8.27 in (210 mm) S-21 air-to-surface unguided rockets inboard. The Samolyet ST-7 (otherwise the UTI MiG-15P, or MiG-15 interceptor trainer) was a MiG-15UTI with RP-1 radar managed by the front-seat pupil, two 0.5-in (12.7-mm) UBK-Ye machine guns under nose and an S-13 camera gun in the starboard side of the nose. This version entered service in small numbers.

The Samolyet SD-57 was a MiG-15bis with its underwing hardpoints adapted for the carriage of two launchers each carrying 12 ARS-57 air-to-surface unguided rockets. The success of this installation paved the way for the conversion of 12 aircraft as ISh (Istrebitel Shturmovik, or fighter assaulter) attack aircraft carrying two types of rocket launchers as well as tanks.

Inflight-refuelling trials
During 1953 at least two MiG-15bis fighters were used in inflight-refuelling trials. The fighters were revised with a probe on the port side of the nose’s upper surface to engage with the drogue of a hose-and-drogue system unreeled from a Tupolev Tu-4N. In 1955 the Mikoyan-Guryevich OKB tested several MiG-15 and MiG-15bis aircraft equipped as remotely piloted targets under the designation Samolyet SDK-5, and in the same year MiG-15 and MiG-15bis machines were tested as Samolyet SDK-5 and Samolyet SDK-7 cruise missiles, each carrying a 2,205 lb (1000 kg) HE warhead, using the same radio-command guidance system as the remotely piloted targets.