With its P-80 Shooting Star firmly established in production during 1945, in July of that year Lockheed was able to commit its development team to the start of work on a more advanced fighter. The first step in this process was the creation of a number of conceptual designs, and these eventually totalled more than 65. The concept designs drew heavily on German research data captured by the US forces in the closing stages of World War II. There was a particular emphasis placed on the use of swept wings for improvement of transonic performance, and covered a large part of the configuration spectrum including W-planform or conventionally swept wings, butterfly or conventional tails, and a powerplant of up to three engines (this last detail comprised one turbojet unit in the fuselage and one turbojet unit at each wing tip).

This basic programme started to bear fruit in 1946 when the US Army Air Forces, which became the US Air Force during the following year, issued a requirement for a penetration fighter with the primary task of escorting bombers and the secondary task of flying ground-attack missions. The task of creating a turbojet-powered escort fighter was formidable enough in itself, for the provision of adequate range was difficult given the thirst typical of current turbojet engines, but this basic problem was compounded by the USAAF’s failure to issue a definitive specification. As a result, the range requirement was extended from 782 nm (900 miles; 1448 km) to 1,303 nm (1,500 miles; 2414 km) and was then reduced to 521 nm (600 miles; 965.5 km), while the time-to-height requirement was increased drastically from 35,000 ft (10670 m) in 10 minutes to 50,000 ft (15240 m) in 5 minutes. 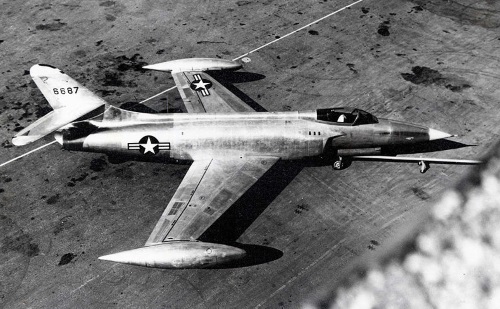 Lockheed pressed ahead regardless, and in June 1946 received a contract for two XP-90 prototypes which were redesignated XF-90 in June 1948. The company’s initial thinking was directed toward a delta-wing layout in its initial Model 090-32-01 proposal, but wind-tunnel testing of this layout led to a change of heart by Willis Hawkins’s design team, which was supervised by Clarence L. ‘Kelly’ Johnson. Thus the already completed components were scrapped as the design team reworked the XP-90 to the Model 90 standard with conventional but swept flying surfaces including a low-set wing swept at 35° and accommodating the two main units of the tricycle landing gear, a fuselage with a sharply pointed nose, and the powerplant of two Westinghouse J34 turbojet engines. These were axial-flow units whose slenderness permitted a side-by-side installation in the fuselage, where they were aspirated via lateral inlets and exhausted under the tailplane, itself located about one-quarter of the way up the vertical tail surface. The design team was particularly concerned about the high stresses that would be imposed on the airframe during ground-attack missions, and therefore planned the airframe on the basis of the new 75ST high-strength aluminium alloy rather than the more normal 24ST aluminium alloy, and also made extensive use of machined and forged parts. The result was an extremely strong but heavy airframe whose empty weight was 50% higher than that of the competing McDonnell XF-88.

Featuring the powerplant of two XJ34-WE-11 engines, each rated at 3,000 lb st (13.34 kN) dry, the first XF-90 was completed some seven months later than the XF-88, which was therefore already well embarked on its flight test programme before the first XF-90 recorded its maiden flight on 3 June 1949 at Edwards Air Force Base in California, in the hand of Tony LeVier.

Flight trials revealed that the XF-90 had no major vices but also possessed disappointing flight performance, the latter resulting from the low power/weight ratio due to the combination of a weighty airframe and an indifferent powerplant.

To improve the power/weight ratio of the basic XF-90 and thereby enhance its overall performance, Lockheed decided to complete the second aeroplane and also revise the first machine to the XF-90A standard with the afterburning powerplant of two XJ34-WE-15 engines. The more potent powerplant boosted performance to a useful degree (a speed of Mach 1.12 being achieved in a dive), but the XF-90A was still slower than the North American F-86A Sabre that was already in service as the USAF’s primary air combat fighter. In June 1950 the USAF decided that further development should be concentrated on the XF-88, and work on the XF-90A was ended three months later.

The first airframe ended its life as a structural test item, and the second airframe was expended in A-bomb tests. Nothing came of plans to develop an improved version with the powerplant of one Allison J33-A-29, one General Electric J47-GE-21, or two Westinghouse J46-WE-2 turbojet engines.

Accommodation: pilot on a Lockheed ejection seat in the enclosed cockpit