Designed for the abortive General Dynamics F-111B swing-wing naval fighter, the AIM-54A Phoenix was brought to fruition (together with its associated Hughes AWG-9 pulse-Doppler radar fire-control system) in the Grumman F-14 Tomcat fleet-defence fighter. The importance of the AWG-9/AIM-54 combination was that for the first time it became possible for an AAM to be launched without first being locked onto a specific target, enabling the crew to use the F-14 s radar to see what was happening elsewhere and only later in the attack locking the missile onto its target

In 1957 the US Navy had issued a request for proposals for a new fighter/missile combination that would provide its strategically vital carrier battle groups with the aerial means to carry the entire burden of effecting the interception of inbound hostile warplanes and air-launched anti-ship missiles at long range from their US targets. The warplane designed to meet this need was the Douglas F6D Missileer, which was planned as a completely subsonic launch platform for six long-range AAMs. The sole function of the Missileer was thus to patrol at an altitude of 35,000 ft (10670 m) and a radius of 130 nm (150 miles; 241 km) from its parent carrier, and use its powerful Westinghouse APQ-81 track-while-scan radar to detect and track hostile warplanes at the maximum possible range, and then launch the requisite number of AAMs to home on the targets using their own active radar guidance. 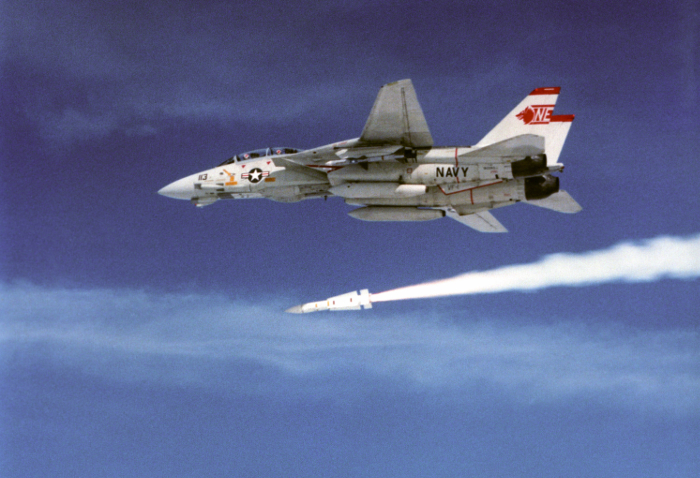 Death of the Missileer
There was considerable political antipathy to a fighter as slow as the Missileer, however, and the fact that the warplane was a launch platform rather than a fighter was not allowed to intervene in the December 1960 decision to cancel the Missileer. The Eagle programme was allowed to continue a short while longer to provide technical data for the new missile that was now needed to replace it as the weapon to be carried by the F-111B selected in place of the Missileer.

The new AAM was required to match the AWG-9 pulse-Doppler radar and associated fire-control system (derived from the ASQ-18 system of the Lockheed YF-12A experimental fighter), and this was intended to detect targets under look-down conditions at a range of more than 130 nm (150 miles; 241 km). Another AAM of the period was the Hughes GAR-9 (from 1962 AIM-47A), designed as a radical development of the Falcon series to arm the US Air Force’s North American F-108 Rapier Mach 3 interceptor: this warplane was cancelled, but the GAR-9 was carried on an experimental basis by the YF-12A.

Hughes began work on its AAM-N-11 naval missile contender in 1960, and was able to draw most beneficially on data from the AAM-N-10 and GAR-9 programmes. From the start the design team decided to retain the classic aerodynamics of earlier AAMs from the Hughes stable: a substantial body therefore carried on its rear portion a cruciform of low-aspect-ratio delta wings trailed by rectangular control surfaces indexed in line with the wings. The considerable body diameter allowed the use of a wide planar-array radar antenna behind the nose radome, and also provided volume for the missile’s other primary components comprising, from front to rear, the electronics (radar, guidance package and radar proximity fuse system), the large warhead, the solid-propellant rocket and, round this motor’s nozzle, the autopilot and hydraulically powered actuators for the control surfaces.

Exceptional capabilities
By then redesignated AIM-54 Phoenix, the missile made its first test flight in 1965 and soon proved itself to possess exceptional capabilities. The standard flight profile flown by the Phoenix starts with a post-launch climb to a peak altitude of 81,400 ft (24810 m), where the missile cruises under control of the onboard autopilot with guidance of the semi-active type using reflections from the target of the radar in the launch warplane’s AWG-9 system. This high-altitude cruise maximises range by reducing drag and providing the rocket motor with optimum operating conditions, and as the missile finally dives down to the attack the energy potential of the cruise altitude is converted into kinetic energy for greater manoeuvrability in the terminal phase of the flight. The missile’s radar switches to the active mode for the final 20,000 yards (18290 m) of the attack, the availability of three fusing modes offering maximum target-destruction capability.

The Phoenix entered service in 1974 as the AIM-54A, and notable features of the missile and fire-control combination are exceptional range, and the ability to engage six targets simultaneously (using a time-share system so that the AWG-9 can control the missiles, which can lose touch with the radar for 14 seconds before failing to reacquire the designated target) regardless of weather conditions and target aspect.

Production continued up to 1980, by which time some 2,566 AIM-54A and AIM-54B rounds had been made. The major limitations of the original AIM-54A model were its hybrid analog thermionic and digital transistorised electronics and the considerable heat the thermionic elements generated once initiated: unless cooled, these elements could catch fire or melt down, and as a result the pallet launcher for the AIM-54A carried a connector, which had to be shut off at missile launch, to supply liquid coolant from the launch warplane.

The AIM-54B Phoenix development of the AIM-54A entered production in late 1977 in an effort to provide the US Navy with an improved missile featuring electronics that had not been compromised by Soviet intelligence-gathering efforts, and was in essence a product-improved AIM-54A with improved resistance to jamming, sheet metal rather than honeycomb aerodynamic surfaces, non-liquid hydraulic and thermal-conditioning systems, and a degree of simplified engineering to ease production.

Improved models
Developed from October 1976 and introduced to production and service in 1982 and 1985 respectively, the AIM-54C was a considerably improved missile with solid-state digital rather than hybrid analog/digital electronics offering far greater reliability and flexibility without the heat-generating tendency of the original electronics, a new Nortronics strapdown inertial reference unit, solid-state radar, eight internal rather than four semi-external radar proximity fuse antennae for a fuse system based on the Motorola DSU-28C/B fuse offering improved capability for all-altitude detonation, and very much more capable ECCM. The result is a missile offering the ability to engage the whole spectrum of targets, including cruise missiles, at longer range and higher altitude with a beam attack capability to supplement the original head-on attack mode.

Production of the AIM-54C ended in 1993 after the delivery of some 2,000 missiles by Hughes and Raytheon, which was brought into the program as second-source supplier during the course of 1986.

Developed under the designation AIM-54C (Sealed), the AIM-54C+ Phoenix was the definitive AIM-54 variant for the F-14D variant of the Tomcat fighter. The new model had a self-contained closed-cycle cooling system (to obviate some of the aerodynamic restrictions imposed on earlier variants by aerodynamic heating), reprogrammable memory, new traveling wave transmitter amplifier adapted from that of the Hughes AIM-120 AMRAAM, new radar antenna, and improved ECCM capability. Successful testing of the AIM-54C+ began in 1990, and an unrevealed number of AIM-54C AAMs were adapted to this improved standard by the use of Hughes-developed modification kits.

Guidance and homing: Hughes DSQ-26 system with an inertial platform, command update and continuous-wave monopulse semi-active radar for the midcourse phase, and active radar with a home-on-jam capability for the terminal phase