Designed and manufactured by the Missile Systems Group of the Hughes Aircraft Company, the Falcon in 1956 became the first fully guided air-to-air missile to enter operational service anywhere in the world. The origins of this milestone weapon can be traced to 1946, when the US Air Force (newly created out of the previous US Army Air Forces) demanded the creation of a sophisticated combination of radar fire-control system and guided missile for installation in the high-performance manned interceptors that the service saw as the only satisfactory weapon for the defence of the continental USA against the possible depredations of bombers carrying free-fall nuclear bombs.

The resulting competition drew responses from most American electronic and aircraft manufacturers, but all of these were surprised when the decisions for the fire-control and missile systems were each made in favour of Hughes Aircraft, a newcomer in this highly advanced field. The first fire-control system to emerge from Hughes’s victory in the design competition was the E-9 installed in the Northrop F-89H Scorpion all-weather fighter, and this was followed by the MG-10 for the Convair F-102 Delta Dagger supersonic interceptor, the MG-13 for the McDonnell F-101 Voodoo supersonic interceptor, and the MA-1 for the Convair F-106 Delta Dart Mach 2 interceptor. All these systems were designed for use with a single AAM type, which resulted from Project ‘Dragonfly’. Hughes was initially awarded a contract for a subsonic missile under the project designation MX-798, which soon gave way to the supersonic MX-904 in 1947. The original purpose of the weapon was in fact as a self-defence weapon for bomber aircraft, but after 1950 it was decided that it should arm fighter aircraft instead, particularly in the interception role. 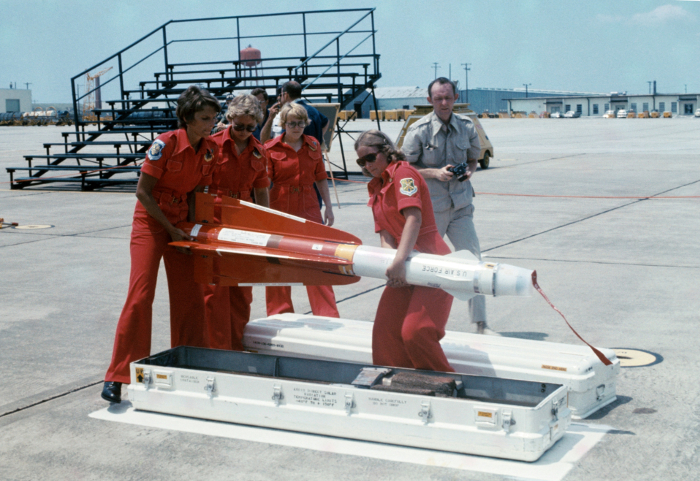 The first test firings took place in 1949, at which time the missile was designated as the AAM-A-2 and given the popular name Falcon. A brief policy of awarding fighter and bomber designations to missiles was reflected in its short-lived redesignation as the F-98 in 1951, but a 1955 policy change led to further designation as the GAR-1. The rationalisation of the US armed forces’ three separate designation systems in 1962 led finally to the definitive AIM-4 designation.

The missile established a basic configuration that became characteristic of Hughes’s subsequent AAMs: a cylindrical body of comparatively great diameter with a hemispherical nose and a large proportion of composites (in this instance fibreglass-reinforced plastics), and a cruciform of low-aspect-ratio delta flying surfaces each trailed by a rectangular elevon for aerodynamic control of the missile in flight.

Proportional navigation
In the GAR-1, the nose was fitted with four receiver antennae (shaped like small fins and spaced at 90° to each other) giving proportional navigation capability to the semi-active radar guidance system, and propulsion was entrusted to a single-charge rocket motor that boosted the missile at about 50 g until motor burn-out.

Introduced after the GAR-2 (from 1962 AIM-4B) and known until 1962 as the GAR-1D Falcon, the AIM-4A had control surfaces of greater area moved farther to the rear of the missile’s centre of gravity to enhance manoeuvrability. The same type of semi-active radar guidance was employed in this model, of which 12,100 examples were produced.

Known until 1962 as the GAR-2A, the AIM-4C was the second IR-guided version to enter service, and was in essence an improved GAR-2 with an upgraded seeker able to lock onto its target against a wider range of background temperatures. In other respects, the GAR-2A differed from the GAR-2 only in its weight of 134 lb (60.8 kg). Production totalled 13,500 missiles including 1,000 and 3,000 exported to Switzerland and Sweden for service with the designations HM-58 and Rb 28 respectively. These two countries operate the missile on their Dassault Mirage IIIS and Saab J 35F Draken fighters, the former being fitted with Hughes TARAN radar also able to provide guidance for the later AIM-26 Super Falcon AAM.

Ordered as the GAR-2B but entering service in 1963 as the AIM-4D after the tri-service rationalisation of US designation systems, this was the last production version of the Falcon, produced to the extent of more than 12,000 weapons in the form of 4,000 new-build weapons and more than another 8,000 remanufactured from surplus AIM-4A and AIM-4C missiles. The type was carried mainly by the F-106A Delta Dart, and was the only Falcon variant optimised for the air-combat role.

A hybrid model, the AIM-4D combined the small airframe of the early Falcon models with the more powerful rocket motor and advanced IR seeker of the larger AIM-4G Falcon to create a comparatively short-ranged but very fast missile that otherwise differed from the AIM-4C only in its maximum speed of Mach 4.

Known as the GAR-3 Super Falcon when it entered service in 1958 and built to the extent of just 300 missiles, the AIM-4E was a special high-performance variant of the basic Falcon family optimized for compatibility with the F-106A Delta Dart with a larger airframe supporting a longer-burning rocket motor, a cruciform wing arrangement with long root fillets, a more powerful warhead, and an improved semi-active radar homing system using an antenna under a pointed radome. In respect of its dimensions, weight and performance, the AIM-4E was basically similar to the AIM-4F.

Introduced in 1959 as the GAR-3A Super Falcon and built to the extent of 3,400 missiles, the AIM-4F was a much-improved model matched to the F-106A Delta Dart interceptor and based on the airframe introduced in the GAR-3A but fitted with a two-stage rocket motor and an improved guidance package offering greater accuracy and improved electronic counter-measures capability. Also introduced in 1959 with the initial designation GAR-4A Super Falcon, the AIM-4G was a version of the AIM-4F with IR guidance capable of locking onto smaller targets at longer ranges than that of earlier IR-guided Falcons. The changes decreased length by 5 in (0.127 m) to 6 ft 9 in (2.06 m) and weight to 145 lb (65.7 kg), and production totalled 2,700 missiles.

Like the rest of the Falcon family, the AIM-4F can most charitably be described at the time of its service debut as an obsolescent weapon despite its powerful warhead and excellent flight performance. The last development of the Falcon series was the XAIM-4H, which did not enter production, and was evolved between 1969 and the programme’s termination in 1971 with an active laser proximity fuse system, a new warhead and better manoeuvrability as its primary improvements over earlier models.

Operationally incapable
So far as its combat service is concerned, the AIM-4 was deployed in May 1967 during the Vietnam War on the USAF’s new McDonnell Douglas F-4D Phantom II, which carried it on the inner wing pylons and was not wired to carry the AIM-9 Sidewinder. The combat performance of the AIM-4 was very poor as the missile, already operational on Air Defense Command aircraft for the protection of North America, had been designed for use against large and ungainly Soviet bombers and the lengthy period required to cool the seeker, as much as six or seven seconds to obtain a lock on the target, rendered it largely ineffective against manoeuvring fighters. Another tactical limitation was the fact that the seeker could be cooled only once: the limited coolant supply meant that once the seeker had been cooled, the supply of liquid nitrogen was exhausted in about two minutes, rendering it useless on the rail. The missile also had a small warhead, and lacked proximity fusing. As a result, only five kills were scored, all with the AIM-4D version.

The Falcon was unpopular with pilots right from the time of its service debut over Vietnam, and was supplemented or partially withdrawn in 1969, to be replaced on the F-4D by the Sidewinder after retrofitting the appropriate wiring. Colonel Robin Olds, commanding the F-4 Phantom II-equipped 8th Tactical Fighter Wing, became exasperated with the Falcon’s poor combat performance and ordered his entire fighter wing to rewire its F-4D fighters to carry the more reliable and capable Sidewinder. This was an unauthorised field modification, but proved so effective that the USAF later ordered that all its fighters be similarly adapted.

The Falcon series was withdrawn from US service with the retirement of the F-106A in 1988.