In the summer of 1927 the British Air Ministry issued Specification F.20/27 for a new fighter, and this elicited a large number of proposals including the Armstrong Whitworth A.W.XVI, Boulton and Paul Partridge, modified Bristol Type 105, Hawker Hawfinch and Gloster SS.18. This last was a two-bay dihedralled biplane with the Bristol Mercury IIA radial engine rated at a nominal 450 hp (335.5 kW) but generally delivering less and suffering from great unreliability.

The Air Ministry’s trials continued into 1928 and resulted in orders for the Bulldog Mk II, but Gloster was encouraged by the fact that the SS.18’s estimated performance had been exceeded only to a limited degree by the Bulldog Mk II and Hawfinch, and therefore decided to persevere with development of the SS.18, which first flew in January 1929 and revealed a maximum speed of 183 mph (295 km/h) at 10,000 ft (3050 m). Exasperated by the development problems suffered by the Mercury IIA engine, Folland decided adopt the Jupiter VIIF unit.

In mid-1929 the re-engined prototype reappeared as the SS.18A in the first step of a protracted development programme that was finally to yield dividends only in the mid-1930s. Trials soon revealed that while the Jupiter VIIF provided the reliability that was needed, it lacked the power for full exploitation of the SS.18A’s combination of aerodynamic cleanliness and structural strength. Thus the Jupiter VIIF was replaced by an Armstrong Siddeley Panther III (later Panther IIIA) radial engine rated at 560 hp (417.5 kW). In this form the SS.18A became the SS.18B that recorded a maximum speed of 205 mph (330 km/) at 10,000 ft (3050 m). The SS.18B was handicapped by the poor power/weight ratio of the Panther, however, so Folland looked for another way of developing the basic SS.18 into a production type.

His opportunity was provided by the Air Ministry’s demand was now for a high maximum speed and heavier armament to ensure destruction of the target bomber in the fleeting moments that this latter would be in the fighter’s sights in the type of high-speed engagement now anticipated. This led to the issue of the F.7/30 requirement for a fighter with a maximum speed of 250 mph (402 km/h) and the armament of four 0.303-in (7.7-mm) machine guns. This latter presented designers with a major problem, for the standard Vickers machine gun had an unfortunate tendency to jam and had therefore to be located within reach of the pilot so that he could clear any such stoppages. It was impractical to install four such guns, together with the required 2,400 rounds of ammunition, in the fuselage all within reach of the pilot, so designers considered it sensible to supplement the time-honoured pair of fuselage-mounted Vickers guns with two wing-mounted Lewis machine guns, even though this weapon was fed from a drum holding only 97 rounds.

Folland felt that the Specification F.7/30 requirement could not satisfactorily be met, and therefore planned a revision of the SS.18B to meet the F.10/27 requirement, which was another of the Air Ministry’s efforts to find a bomber destroyer powered by the Jupiter VIIF engine and armed with no fewer than six 0.303-in (7.7-mm) machine guns. In the summer of 1930 the SS.18B was converted into the SS.19 with the Jupiter VIIF engine and two synchronised Vickers guns in the fuselage with 600 rounds per gun and four unsynchronised Lewis guns installed under the leading edges of the upper and lower wings with 97 rounds per gun. The combination of greater weight and lower power meant that the SS.19’s maximum speed was only 188 mph (302.5 km/h) at 10,000 ft (3050 m). The SS.19 handled extremely well in the air, but the Lewis gun battery was disliked in official circles and the Air Ministry suggested its removal so that night flying equipment could be added.

Folland nonetheless pressed ahead with development of the SS.19 as the SS.19A day fighter with the armament reduced to two Vickers machine guns, spatted wheels, and the fin enlarged to improve directional stability. The SS.19A recorded a maximum speed of 204 mph (328 km/h) at 10,000 ft (3050 m).

Continued efforts by the Air Ministry to secure an effective interceptor of bombers resulted in the F.20/27 requirement that resulted in eight prototypes including the now inevitable Gloster machine. Folland had decided that no further improvement in overall capability was possible with the Jupiter engine, which had reached the limit of its development potential, so the SS.19A was revised as the SS.19B with the powerplant of one Mercury VIS engine rated at 536 hp (400 kW). The SS.19B was officially evaluated in February 1933 and revealed a maximum speed of 212 mph (341 km/h) at 15,000 ft (4570 m), and virtually the sole criticism levelled as the type was the fact that the spatted wheels tended to become clogged: in July 1933 the spats were removed. Bristol had by now completed development of the Mercury VIS at the higher rating of 570 hp (425 kW), and during July 1936 the SS.19B was revised with this engine for a maximum speed of 215.5 mph (347 km/h) at 16,500 ft (5030 m). The SS.19B could not be ignored by the Air Ministry, and in September 1933 Gloster’s perseverance was finally rewarded by an order for 24 aircraft based on the SS.19B but named Gauntlet and scheduled for delivery by March 1935 as replacement for the Bulldog fighters of one squadron.

The definitive contract for these Gauntlet Mk I fighters was issued in February 1934 and demanded features such as the Mercury VIS2 engine rated at 640 hp (477 kW), armament of two Vickers Mk V machine guns although it was Mk III weapons that were actually installed, and a main landing gear unit with Dowty oleo legs in place of the current Vickers struts. Further development paved the way for the Gauntlet Mk I in its production form, of which the first example was flown in December 1934. The Gauntlet entered service in May 1935 with No. 19 Squadron.

Resulting from Air Ministry orders of April and September 1935 for 104 and 100 aircraft respectively, the Gauntlet Mk II differed from the Gauntlet Mk I mainly in its construction, which was rationalised to accord with the Hawker system of construction after Gloster’s full integration into the Hawker Siddeley organisation, the adoption of a three-blade Fairey-Reed metal propeller in some later aircraft, and Vickers Mk V machine guns. Gauntlet Mk II deliveries started in May 1936, initially to Nos 56 and 111 Squadrons at the start of a programme that eventually saw a total of 15 home-based RAF squadrons, four overseas RAF squadrons (one in Malta, one in Palestine and two in Egypt) and five home-based Auxiliary Air Force squadrons equipped with the type. The Gauntlet Mk II reached its peak in the UK during May 1937, when there were 14 squadrons flying the type, but was gradually replaced in first-line service from the end of that year by the Gloster Gladiator biplane and Hawker Hurricane monoplane fighters.

Many of the Gauntlets relegated from first-line service in the UK were passed to second-line squadrons in the UK and first-line squadrons in the Mediterranean, Middle East and North Africa, but a number were retained in the UK up to December 1939 as meteorological reconnaissance aircraft. The type remained in useful Middle Eastern service up to June 1940, and the last recorded Gauntlets in British service were a quartet of Gauntlet Mk II fighters flown by No. 1414 Flight at Nairobi in Kenya as trainers. In 1939/40, South Africa and Rhodesia acquired four and three ex-RAF Gauntlet Mk II fighters. Finally, 25 ex-RAF Gauntlet Mk II fighters were sent to Finland in January and February 1940 as British aid to that country during her ‘Winter War’ (1939/40) with the USSR. 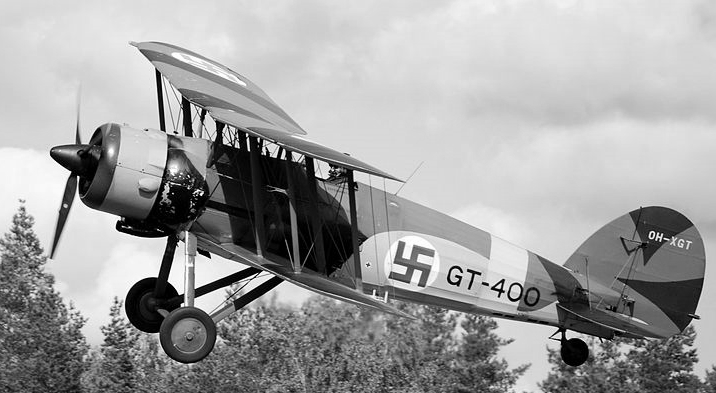 In October 1934 the Danish government bought one Gauntlet and secured a licence for the production of additional fighters by the Flyvertroppernes Vaerksteder. The pattern aeroplane first flew in April 1936, and Danish production of 17 additional aircraft was completed between September 1936 and January 1938 as the equipment of 1. Eskadrille (No. 1 Squadron). Five of the aircraft were lost in accidents before the German invasion of Denmark in April 1940. One more aeroplane was destroyed on the ground during the invasion, and the fate of the other 12 aircraft remains obscure.

Fixed armament: two 0.303-in (7.7-mm) Vickers Mk V fixed forward-firing machine guns with 600 rounds per gun in the sides of the forward fuselage with synchronisation equipment to fire through the propeller disc