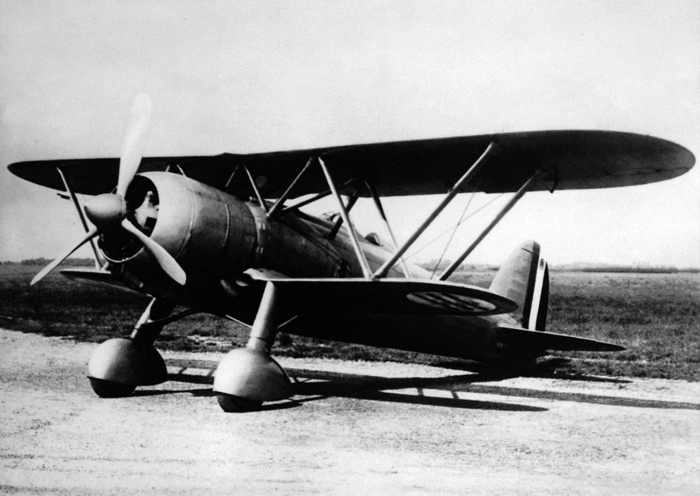 With the Fiat CR.42 Falco (falcon), the line of classic biplane fighters designed by Ingegnere Celestino Rosatelli for the Società Anonima Aeronautica d’Italia FIAT (Fiat) came to an end, and the type also had the distinction of being the last biplane fighter to be kept in production by any of the combatants in World War II. By the time of the CR.42’s operational debut, the biplane fighter had been wholly superseded in first-line service with all other modern air forces by the monoplane fighter, but the biplane fighter still had a niche in the Italian inventory as many pilots believed that the agile biplane possessed a number of operational advantages over even the most manoeuvrable of monoplane fighters. The Italian air force was indeed beginning to move into the monoplane fighter era at this time, and the CR.42 therefore provided a capable bridge between the old and new, and when flown by a skilled pilot against opposition in indifferent hands could prove itself a useful dogfighter as a result of its great strength, viceless handling characteristics and excellent manoeuvrability.

Genesis
The CR.42 was in every way an evolutionary development of the CR.32 production type via the CR.40 and CR.41 prototypes: from the CR.32 the Falco inherited its basically metal structure with light alloy and fabric covering, its layout as a virtually sesquiplane biplane with Warren-type interplane bracing, its fixed tailwheel landing gear with nicely spatted main units of the divided type, its open cockpit, and its comparatively light fixed forward-firing armament. From the CR.40 and CR.41 the Falco inherited its radial-engined powerplant, whose higher power/weight ratio considerably boosted performance, reduced the complexity of the whole installation and its operational vulnerability by doing away with a coolant radiator and its associated ‘plumbing’, and enhanced agility as a result of the reduced mass located some way forward of the centre of gravity. Like its predecessors, the CR.42 was based on a fuselage of basically rectangular section with a curved upper decking fore and aft of the pilot’s cockpit, and considerable attention was paid to the blending of the circular-section NACA engine cowling into the rest of the fuselage for the lowest possible drag.

Rosatelli took advantage of the availability of more modern materials to produce a stronger fuselage: the primary structure was of welded manganese/molybdenum steel primary structure faired out to the desired oval exterior shape by light alloy false bulkheads and stringers, and the covering comprised light alloy panels as far aft as the rear edge of the cockpit, and fabric over the section to the rear of this. The tail unit was a cantilever unit of Duralumin construction with fabric covering and horn-balanced control surfaces in the form of a rudder and two elevators. The biplane wing cellule was modelled on that of the CR.32: the halves of the flat lower wing extended from the lower longerons, and supported the dihedralled and somewhat larger upper wing panels, which met at a centreline junction supported over the fuselage by two inward-canted sets of N-type cabane struts. On this centreline were a small gravity-feed fuel tank in a bullet fairing. The upper and lower wings were separated by Warren-type bracing that combined the functions of interplane struts and flying/landing wires. The wings were of steel and light alloy construction with a covering of light alloy over the leading edges and fabric elsewhere, and ailerons were installed on the upper wing only. The airframe was completed by the tailwheel landing gear, which comprised a well faired tailwheel (retractable on the prototype but fixed on the production models) and the divided main units: these latter were each based on a well faired semi-cantilever leg carrying a spatted wheel and incorporating an oleo-pneumatic shock absorber, and were each braced longitudinally and laterally by short struts extending respectively aft to the rear spar of the lower-wing stub root and to the centreline fairing extending from the engine back under the fuselage.

Development
The CR.42 prototype recorded its maiden flight on 23 May 1938 with the powerplant of one Fiat A.74 R1C.38 air-cooled 14-cylinder two-row radial engine rated at 840 hp (626 kW) at 12,465 ft (3800 m) and driving a three-blade propeller of the variable-pitch type, although this latter was replaced in production aircraft by a three-blade Fiat unit of the constant-speed type, and was fitted with the initial pattern of armament comprising single 12.7-mm (0.5-in) and 7.7-mm (0.303-in) machine guns.

Into production
Production of the CR.42 had already been planned against an initial Italian air force order for 200 aircraft, and the first deliveries were effected in February 1939 for an entry into service during April of the same year: the nature of the Italian air force at this time is nicely indicated by the fact that Fiat had delivered the tenth production example of its G.50 Freccia monoplane fighter exactly two months earlier.

Export successes
Despite the basic obsolescence of the Falco’s design concept, the type secured a number of useful export orders. Belgium ordered 40 such fighters toward the end of 1939, and at the time of Germany’s invasion of the country in May 1940 the Belgian air force had received 24 of its aircraft as equipment for the 3e and 4e Escadrilles (squadrons), which lost most of their aircraft on the ground. Hungary placed an order for 68 aircraft that were delivered in 1939/40. The aircraft were flown operationally as the Hungarians supported the German invasion of Yugoslavia (April 1941) and also as part of the Hungarian contribution to the Axis invasion of the USSR from June 1941: the last Hungarian CR.42 fighters were retired from first-line service in the closing stages of 1941. The largest export order was placed by Sweden, which contracted during February 1940 for a total of 72 aircraft to be operated with the local designation J 11. Deliveries were interrupted by the exigencies of the war and Sweden received its last aircraft only in September 1941 for service with the F 9 wing, which relinquished its last aircraft in 1945: most of the surviving aircraft were bought by a civilian organisation and converted into target tugs.

Italian service use
Production of the CR.42 continued to a time late in 1942 and totalled 1,781 aircraft, so deliveries earmarked for the Italian air force totalled 1,617 although some 75 late-production aircraft were delivered to the Luftwaffe for use as night harassment raiders. At the time of Italy’s entry into World War II during June 1940, the Italian air force had 272 CR.42 fighters in service. These aircraft were used on a small scale by the 3o Stormo da Caccia Terrestre (land-based fighter wing) during the invasion of southern France in the first week’s of Italy’s war, and between September and November 1940 larger numbers of this biplane fighter were allocated to the Corpo Aero Italiano in support of the Luftwaffe during the Battle of Britain: the Falco was severely handled by the well flown Hawker Hurricane and Supermarine Spitfire monoplane fighters of the Royal Air Force, and the 18o Stormo was withdrawn together with the survivors of its 50 aircraft.

The first time the CR.42 was committed in large numbers was during the campaign that Italy launched from Albania against Greece from October 1940, and thereafter the CR.42 was extensively used over the Balkans and then over the Aegean. The type also featured prominently in the Italian air effort in North Africa and East Africa. In the latter theatre, the 163a and 413a Squadriglie (squadrons) operated the type from May 1940, but in the face of determined British and South African air opposition later in the same year were soon reduced to small numbers of fighters. The situation was remedied by a major airlift operation that used Savoia-Marchetti SM.82 transports to fly the 2,475 nm (2,850 miles; 4000 km) non-stop route to the theatre with dismantled aircraft and crated engines: in the nine-month period from August 1940 to April 1941, these transports delivered 51 CR.42 fighters, a number of engines and quantities of spare parts, and this gave the Italian forces a limited air-defence capability until their surrender in November 1941, when two CR.42 fighters were still operational and were then seized by the South Africans.

The CR.42 was also successful against the Royal Air Force in the opening phases of the ‘Desert War’ in North Africa, but as more modern British fighters arrived the type’s obsolescence was forcefully revealed and the CR.42 was increasingly relegated to the close-support role. Only 82 CR.42 fighters survived the ‘Desert War’ to be evacuated to Italy in January 1943, and the aircraft were then used as fighters over Italy and as fighter-bombers over the Balkans until September 1943 and the Italian armistice with the Allies, when there were only 64 CR.42 fighters still operational; some of these were converted as liaison aircraft with a second cockpit added immediately behind the pilot’s cockpit. The Germans seized most of these to supplement the others it had received direct from the Fiat production line, and used these machines in dwindling numbers as night harassment aircraft up to May 1945.

Subvariants of the CR.42 were produced in modest numbers. The CR.42AS Falco was the Africa Settentroniale (North Africa) version that was delivered from service in Libya from July 1941 as the production derivative of the CR.42CB with tropical dust/sand filters and underwing racks for two 100-kg (220-lb) free-fall bombs. The CR.42CB Falco was the Caccia Bombardiere (fighter-bomber) version that was produced as conversions of early fighters for service in Libya from the spring of 1941 with underwing racks for two 100- or 50-kg (220- or 110-lb) free-fall bombs. The CR.42CN Falco was the Caccia Notturna (night-fighter) version with exhaust flame dampers, radio and small searchlights under the wings. The CR.42LW Falco was the version produced for the Luftwaffe as a derivative of the CR.42AS.

Disposable armament: up to 200 kg (441 lb) of disposable stores carried on two hardpoints (both under the lower wing with each unit rated at 100 kg/220 lb), and generally comprising two 100-kg (220-lb) free-fall bombs