Just after the end of World War II, the US Navy began the search for a turbojet-powered night fighter as part of the programme to re-equip its force of advanced aircraft carriers with the very latest and best warplanes of the types made possible by the enormous technological strides achieved during the conflict. The resulting requirement was issued to four companies, and of these Douglas and Grumman were selected to proceed to the prototype stage. The Grumman XF9F-1 prototype was then developed into the F9F Panther series of single-seat day fighters, and the night fighter requirement was fulfilled by the Douglas design.

The Douglas offering was a completely conventional mid-wing cantilever monoplane of light alloy stressed-skin construction. The dihedralled wing was tapered in thickness and chord to its slightly rounded tips, had a low-drag aerofoil of the laminar-flow type, and was arranged so that the outer panels folded upward, under the power of a hydraulically operated system, to reduce the aeroplane’s overall width and so improve its flight deck and hangar footprint. Virtually the full span of the wing’s trailing edges was occupied by outboard ailerons and inboard flaps, the latter of the slotted type.

The oval-section fuselage was a semi-monocoque structure, and carried three hydraulically operated air brakes (one under and one on each side) to the rear of the wing’s trailing edges. At the rear of the fuselage was the cantilever tail unit, which had single vertical and horizontal surfaces. The former comprised a fin and a rudder, and the latter a tailplane (located about one-quarter of the way up the fin to keep it well clear of the turbulent gases streaming rearward from the two turbojet engines) and two elevators: all of the moving elements were statically and aerodynamically balanced, and incorporated trim tabs.

The airframe proper was completed by the landing gear, which was of the hydraulically actuated retractable tricycle type with a single wheel on each unit; there were also an extending auxiliary wheel under the rear fuselage, and an extendible arrester hook.

The powerplant was based on two Westinghouse J34 axial-flow turbojet engines mounted semi-externally in nacelles extending from the lower sides of the fuselage. This permitted a straight gas flow through each engine, which maximised the power available, and also facilitated engine change: after its cowling had been removed, the engine could be unbolted and lowered straight down onto its handling truck, using a standard bomb hoist, and a complete engine change could therefore be effected in as little as one hour. The engines drew their fuel from tankage in the fuselage above the engines and behind the cockpit, and there was also provision for two drop tanks under the wing. 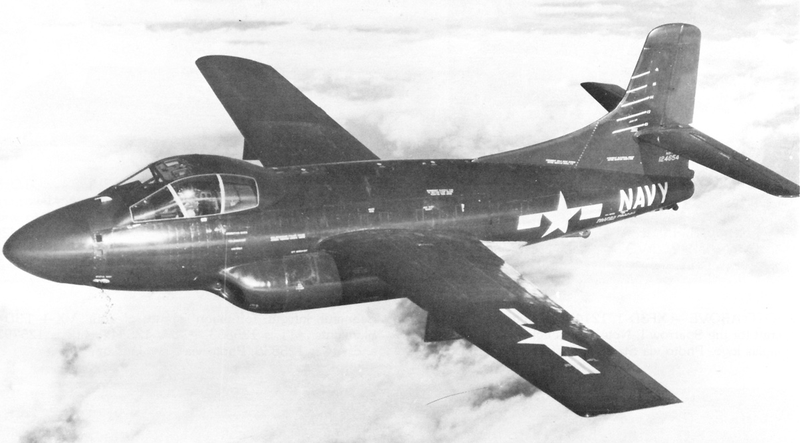 The pilot and radar operator were seated side-by-side in the wide cockpit behind a fixed windscreen and under a largely clear-view canopy, both of these transparencies being of the bullet-proof type. The cockpit was pressurised and air-conditioned by an AiResearch system. The two crew members’ standard means of escape from the cockpit was via a ventral tunnel between the rear of the cockpit and the lower fuselage, through which the men could slide one after the other, feet first and facing backward, protected as they emerged by the hydraulically opened lower hatch door. This escape method was evolved for the twin reasons that current ejection seats were unreliable and also difficult to use in a side-by-side installation. In the event of a ditching, the men escaped through a hatch in the canopy.

The first of three XF3D-1 prototypes recorded its maiden flight on 23 March 1948 with the powerplant of two J34-WE-24 engines each rated at 3,000 lb st (13.34 kN) dry, and successful flight trials ensured that the type entered production and full service with the name Skyknight.

At least 12 of the F3D-1 aircraft were used with the revised designation F3D-1M for tests with the AAM-N-2 Sparrow I medium-range AAM, of which four were carried under the wing. Even though it did not enter service, this model was redesignated as the MF-10A in 1962.

The F3D-1 was essentially an interim model pending availability of the F3D-2. This was to have had the powerplant of two Westinghouse J46-WE-3 axial-flow turbojet engines each rated at 4,600 lb st (20.46 kN) dry an installed in somewhat larger nacelles, the additional power being required to maintain performance at the prototypes’ level despite the additional 5,362 lb (2434 kg) of weight represented by full operational equipment including the massive radar equipment. Essentially a scaled-up derivative of the J34, the J46 ran into development problems and was cancelled, however, so the F3D-2 was delivered with the powerplant of two J34-WE-36 or -38 engines in the larger nacelles intended for the J46 installation. Other changes from F3D-1 standard included an improved air-conditioning system, upgraded electronic equipment, a revised and thicker bullet-proof windscreen, a more modern autopilot, and the installation of wing spoilers for enhanced lateral control.

The first F3D-2 recorded its maiden flight on 14 February 1951, and all 237 of the improved fighters had been delivered by March 1952. This variant was flown operationally only by the US Marine Corps. Despite its indifferent powerplant, the F3D-2 scored more ‘kills’ in the Korean War (1950/53) than any other US Navy and US Marine Corps warplane, including the world’s first nocturnal destruction of another jet-powered warplane, in this instance a Yakovlev Yak-15 shot down in November 1952. In 1962, surviving aircraft received the revised designation F-10B.

Some 16 of the F3D-2 aircraft were revised with the same quadruple Sparrow AAM armament as the F3D-1M machines with the designation F3D-2M that was altered to MF-10B in 1962.

The F3D-2T was a night fighter trainer conversion (five aircraft) of the F3D-2.

The Skyknight was phased out of first-line naval service late in the 1950s, but remained fully operational as a night fighter with the US Marine Corps into the early 1960s, and the trainer and electronic warfare conversions then remained in valuable service for several more years until the last aircraft were retired in 1969.

Accommodation: pilot and radar operator side-by-side in the enclosed cockpit

Fixed armament: four 20-mm fixed forward-firing cannon with 200 rounds per gun in the underside of the forward fuselage

Disposable armament: up to 4,000 lb (1814 kg) of disposable stores carried on two hardpoints (both under the wing with each rated at 2,000 lb/907 kg), and generally comprising free-fall bombs