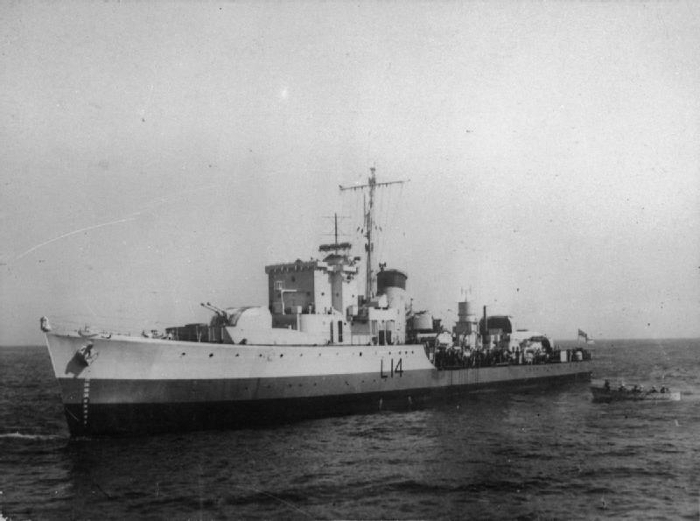 A new threat
By the time its ‘N’ class destroyers were under construction, the UK had accepted the inevitability of war with Germany and, as a result of its reluctance in World War I to adopt the convoy system and the consequent merchant shipping losses to submarine attack, had decided to waste no time in the introduction of a convoy system as soon as war did finally break out. This raised the need for a large number of specialised escort vessels if the Royal Navy’s force of fleet destroyers was not to be stripped to the point it could not support major surface forces. The result was a series of dual-role and escort destroyer classes optimised for the escort role with the same basic hull construction and boiler arrangement as the latest fleet destroyers but with an armament of main guns in single mountings, improved anti-submarine weapons, and enhanced anti-aircraft weapons in which the standard arrangement of four 2-pdr guns in a quadruple mounting was supplemented by four single (later twin) mountings for 20-mm cannon that were replaced later in the war by 40-mm weapons in single mountings.

Finally, in the first series of this family of dual-role ships, came the 32 destroyers of the ‘C’ class in four eight-ship ‘CA’, ‘CH’, ‘CO’ and ‘CR’ subclasses with a displacement of some 1,720 tons, an armament of four 4.5-in (114-mm) dual-purpose guns in single mountings, four 40-mm anti-aircraft guns in one twin and two single mountings, four 20-mm anti-aircraft cannon in two twin mountings and four 21-in (533-mm) torpedo tubes in a quadruple mounting, and a speed of 36.75 kt on the 40,000 hp (29825 kW) delivered to two shafts by geared steam turbines.

Classic action with a heavy cruiser
Despite the very difficult time they had endured in the first stages of World War II, British destroyers also achieved considerable offensive results throughout the war, one of the most impressive being the sinking of the 13,300-ton Japanese heavy cruiser Haguro in May 1945. This resulted from the sighting by the ‘S’ class submarine Subtle, operating between Malaya and the island of Sumatra, of a ship which it reported as a ‘Nachi-class cruiser’ and three escorts (one of them identified as a destroyer) in the late afternoon of 10 May. The Japanese ships were steaming to the north-west, but Subtle and two sister submarines were not able to close the Japanese force as a result of shallow water and a fast tidal flow in combination with the Japanese ship’s zigzag progress. Haguro, accompanied by the destroyer Kamikaze and two patrol vessels, had sailed from Singapore on the previous day for Port Blair in the Andaman Islands, from which the ships were to evacuate the Japanese garrison. Primed by an earlier intelligence report, an Allied force had already left Colombo in Ceylon to intercept the Haguro. Commanded by Vice Admiral H. T. C. Walker, this force was based on the battleships Queen Elizabeth and French Richelieu, supported by the Dutch destroyer Tromp and four escort carriers.

However, on 11 May a Japanese reconnaissance aeroplane spotted this force, and Haguro was instructed to return to Singapore, in the process passing the British submarine line: Kamikaze depth charged but did not sink Subtle. Haguro then slowed as its captain waited for an order to head once more to the Andaman islands after a planned air attack had destroyed or driven back the Ceylon-based Allied force. The air attack did not take place, but Haguro’s captain, encouraged by the success of an escorted Japanese transport in reaching the Nicobar islands, a mere 200 miles (320 km) to the south of Port Blair, then headed for the Andaman islands once more on 14 May. All but one of the submarines forming the patrol line between Malaya and Sumatra had now been withdrawn, so Haguro’s force reached the Andaman Sea without detection. Walker felt that this might be the case, and early on 15 May detached Captain Manley Power’s 26th Destroyer Flotilla to find Haguro. Leading in the ‘S’ class Saumarez with the ‘V’ class destroyers Venus, Verulam, Virago and Volage following, Power was off the north-western tip of Sumatra by the break of day, when he was informed that reconnaissance aircraft had found the transport returning from the Nicobar islands.

Power headed for the transport, but later in the same morning received orders from Ceylon instructing him to break off his search for Haguro, which was now not considered a realistic threat to Allied operations in the Bay of Bengal. Power decided to query the order on the grounds that the commander-in-chief was not in full possession of the facts and, pending clarification, maintained his course. A reconnaissance aeroplane then reconfirmed the sighting of the transport and, farther to the north, Haguro’s little flotilla. The Japanese turned back once they had been sighted, but Power held his course even as an air attack failed to sink Haguro. Early in the afternoon the British destroyers passed the northern tip of Sumatra and entered the strait at a speed of 21 kt. Right through the afternoon reconnaissance aircraft reported that Haguro was heading south-east at modest speed. The tactical situation now demanded that the 26th Destroyer Flotilla make contact just before dark so that a night attack could then be undertaken on the vastly superior heavy cruiser. The destroyers were redeployed from line ahead to line abreast so that the swathe of sea their look-outs could cover was maximised, and the start of heavy rain squalls now started to shift the tactical balance in favour of the destroyers with their more advanced radar.

Radar a key ‘weapon’
The line of British destroyers was steaming east-south-east when Venus, on the northern extremity of the line, at 22.40 hours reported radar contact of a target some 40 miles (64 km) to the north-east and heading south-east. The well trained 26th Destroyer Flotilla knew exactly what to do as Power led his ships past Haguro, which was now some 14 miles (23 km) to port of them, and then turned north to pass ahead of the Japanese cruiser before attacking from each side. Haguro, with Kamikaze on her port quarter, was 10 miles (16 km) from the centre of the British line and closing on 16 May when, at 00.45 hours, the cruiser’s radar picked up the destroyers. The cruiser manoeuvred as if not certain of the detected ships’ identities, for they were approaching from the direction of Singapore, but then reverse course. Only Venus had managed to work her way behind the target by this time, and was now on the cruiser’s port bow. While Power’s other destroyers increased speed to overtake, Venus crossed Haguro’s bow to attack from ahead and to starboard, but missed her opportunity and had to undertake a rapid 300° port turn in order to disengage. It would seem that the Japanese assumed that torpedoes had been launched and again reversed course, but still without opening fire. Power’s four destroyers were now closing at a relative speed of over 50 kt. Any misunderstandings as to identity were resolved as Saumarez passed Kamikaze on a reciprocal course and raked her at close range with both main armament and light weapons fire. Just after 01.30 hours both sides fired starshell. Saumarez was bathed by the greenish glare at a range of only 3,000 yards (2245 m) from Haguro, which opened fire: with 10 8-in (203-mm) guns in five twin turrets and eight 5-in (127-mm) guns, the heavy cruiser outgunned the destroyer by a considerable margin.

Haguro despatched with torpedoes
The destroyer was soon hit in a boiler room, but managed a tight turn to port and launched a full salvo of torpedoes. Almost simultaneously Verulam attacked from some 90° farther round, profiting from the Japanese concentration on Saumarez to do so without being fired on. The cruiser, manoeuvring violently by now, was hit forward by three torpedoes. The ship’s forward armament fell silent and the vessel began to list only to be hit by one or possibly two more torpedoes in the machinery spaces. For the next 10 minutes Haguro was tackled with gun fire from various directions before Venus and Virago attacked from opposite directions and fired a total of 11 torpedoes. It is probable that only three of the torpedoes struck home, but by this time the cruiser’s fire was limited and under local control. On the bridge most of the cruiser’s senior officers had been killed by a direct hit by a 4.7-in (119-mm) shell. Volage had not yet launched a torpedo attack, and at 01.50 hours Power ordered this destroyer to deliver the coup de grace against the cruiser, which was lying deep in the water, listing and burning aft. Despite a range of only 1,500 yards (1370 m) every torpedo missed, so it was Venus’s last two torpedoes which finished Haguro, which sank at 02.06 hours about 45 miles (72 km) south-west of Penang.

The British destroyers departed shortly after this, allowing Kamikaze to return and rescue 400 men from the water. The British losses amounted to only two men killed, both of them on Saumarez, which was the only British ship to have been hit.

Long-range destroyers
From a time late in World War II, when the defeat of Germany was certain and greater emphasis was then placed on operations against the Japanese in a Pacific campaign calling for a significantly longer range capability, the British designed a new destroyer type as the ‘Battle’ class on the basis of a larger hull to provide greater seaworthiness, enlarged bunkerage for the required longer range, enhanced self-sufficiency in the course of protracted operations away from a major base, and a much heavier anti-aircraft armament not for self-protection but to aid in the defence of the larger warships (especially the aircraft carriers)the destroyers were supporting. Some 44 of the class, including two for the Royal Australian Navy, were ordered, but only 28 were completed as the 16 units of the second group were cancelled.

Another class, designed at a slightly later date but eventually completed to the extent of only two ships, was the ‘Weapon’ class optimised for the anti-aircraft and anti-submarine roles with anti-ship capability offered only by the low-angle fire of its six 4-in (102-mm) dual-purpose guns, which were installed in three twin turrets, and its 10 21-in (533-mm) torpedo tubes.