Two particular and especially useful features of externally powered automatic weapons, such as the rotary-barrel cannon or machine gun, are firstly that the weapon does not cease firing in the event of a misfire, as the faulty round is merely extracted and ejected as part of the continuous operating system, and secondly, that the rate of fire can be varied by a change in the electric or hydraulic power delivered to the rotating barrel/breech assembly. In the weapons of the M61 Vulcan series and their derivatives, for example, the rate of fire can be changed between 2,000 and 6,600 rounds per minute. 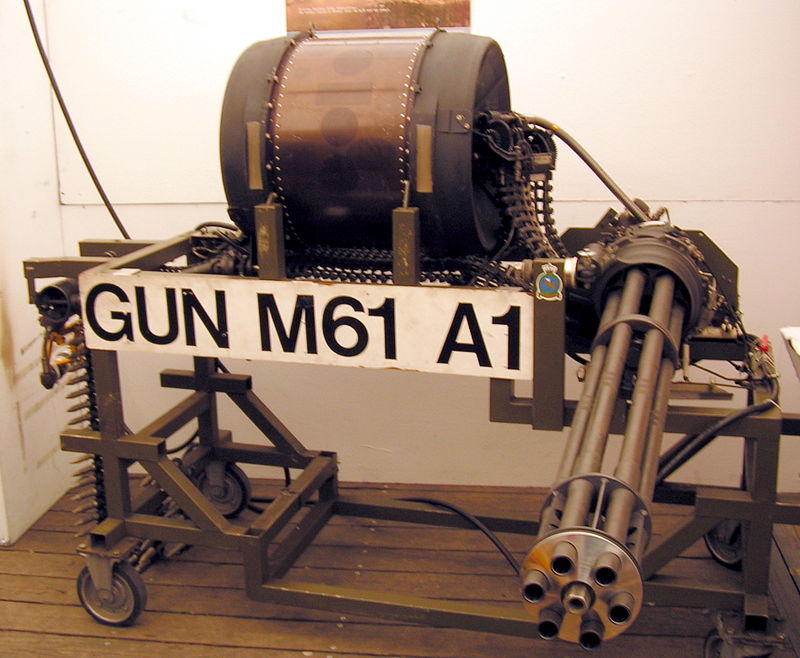 The same holds true for another type of automatic weapon developed in the 20th century. This is the chain gun which, unlike the rotary-barrel gun, has just one barrel and uses an external power source to drive an operating system based on an endless-loop roller chain. Thus the operation of the weapon is wholly independent of the diversion of any power from the gas or recoil of the cartridge after it has been fired.

The primary advantages of the chain gun over its gas or recoil-operated counterparts are reliability and controllability. Not dependent on the sometimes unreliable firing of a cartridge to power the cycle of action, a chain gun uses an electric motor to drive the chain that moves round in a rectangular path via four sprockets which keep the chain tensioned. One link of this chain is connected to the weapon’s bolt assembly, moving it forward and then backward to load the new round, fire and then extract and eject the spent cartridge before a fresh round is loaded.

As with all types of weapon which are not reliant on some of the energy from a fired cartridge to extract the spent case and load the next round, a misfired round does not stop the weapon, for the faulty round is simply extracted and ejected as part of the weapon’s cycle of continuous functioning.

Each full cycle comprises four periods. Two of these periods (the passage along the longer sides of the rectangular movement controlling the bolt) dictate the time in which the bolt is driven forward and loads a round into the chamber, and are the same length of time as the bolt is withdrawn. The other two periods (the passage along the shorter front and rear of the rectangle sideways relative to the barrel’s bore) dictate the time for which the breech remains locked while firing, and remains open to allow spent case extraction and the ventilation of fumes.

A distinct advantage of the chain gun action is that it provides considerable ‘dwell’ periods at the firing and ejecting/stripping stages of the cycle, a fact which contributes to safety in the former stage and to minimum build up of noxious gases. Among the many advantages of the system are a fully variable rate of fire, a simplified operating cycle using an open bolt without any need for chargers, declutching feeders and other such devices, and a high feed system pull eliminating all need for a booster.

The time which the chain takes to move around a complete loop of its operating rectangle controls the rate of fire, and thus a variation in motor speed allows the chain gun, in theory, to fire at a rate continuously variable from single rounds to the maximum safe rate imposed by the pressure drop rates in the barrel after a cartridge has been fired, mechanical tolerances, etc. The 7.62-mm (0.3-in) EX-34 has a standard rate of 570 rounds per minute, and development is creating a version with a rate of up to 1,000 rounds per minute. In practice, however, any chain gun of the cannon or machine gun type usually possesses two or three pre-set firing speeds.

For the military operator, one of the primary benefits of the chain gun’s operating principle is the fact that it is inherently reliable.

The ‘classic’ chain gun is perhaps the M230 used in the Boeing (originally Hughes and then McDonnell Douglas) AH-64 Apache battlefield helicopter as the core of its area weapon system. In 1972 Hughes embarked on a company-financed research effort to design a single machine gun to fire the 20-mm US Army M50 round. By April 1973, the programme had reached the point of firing more powerful 30-mm WECOM linked ammunition from a Model A prototype. In January 1975 a Model C was added to fire the 30-mm linkless round and be used in the under-chin turret installation of the company’s proposed Advanced Attack Helicopter for the suppression of enemy ground fire: the helicopter was adopted as the AH-64 Apache, with the Model C cannon as its standard M230 armament. 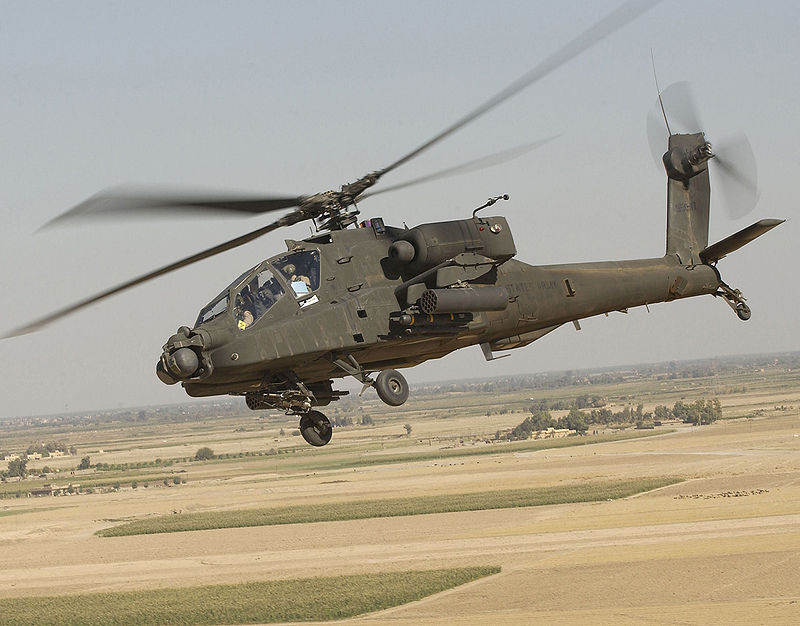 The M230 uses a 2-hp electric motor to fire 30-mm linkless ammunition at a rate of some 625 rounds per minute, a rate achieved after a 0.2-second spool-up time. The practical rate of fire is about 300 rounds per minute with a 10-minute cooling period as the gun is air-cooled. The gun has a positive cook-off safety for open bolt clearing, and an arrangement to prevent the ramming of two rounds. Spent cases are ejected overboard through the bottom of the gun.

The cannon is installed in a wholly exposed Lightweight Turret weighing 148 lb (67.1 kg): the mounting is powered by the helicopter’s hydraulic system to provide traverse through 220° (110º left and right of the centreline), and the cannon can be elevated through an arc of 71° between -60° and the stowed position of +11°. Cannon elevation is provided by a single hydraulic actuator located on the cannon’s centreline just forward of the trunnion point, and the cannon is spring-loaded to return to its centreline stowed position with the barrel angled up about 11° should the hydraulic power fail. This allows the cannon, which is mounted below the co-pilot’s seat, to collapse cleanly into its designed space between the seats of the two pilots in the event of a hard landing.

The ammunition tank is a semi-permanent fixture in the lower fuselage of the helicopter directly under the main rotor to present no problems of centre-of-gravity movement as the weighty ammunition is used, and is charged by means of a de-linking loader which can install a full complement of 1,200 rounds in a mere 10 minutes. The linkless feed system is of the linear double-ended variety, taking fresh rounds from the ammunition tank along the port side of the helicopter and returning along the starboard side after the spent cases and any misfired rounds have been ejected overboard.

The M230 is capable of firing NATO standard 30-x113 30-mm ammunition including British ADEN and French types, but 30-mm lightweight rounds (M788 target practice, M789 HE dual-purpose and M799 HE incendiary) used as standard by the US Army for the M230 have a light alloy rather than brass or steel case to save weight. 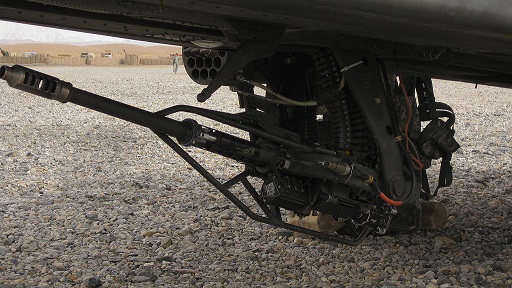 The main role of the Area Weapon Subsystem is suppression of ground defences and the destruction of light armoured vehicles, but a significant secondary role is the destruction of helicopters. In both the air-to-surface and air-to-air roles the Apache’s sensors and fire-control system are all-important for acquisition and accurate designation of the correct targets.

The primary instrument in this highly complex system is the Target-Acquisition Designation Sight (TADS): this is a gyro-stabilised sight unit for day/night target acquisition, and is located in a chin turret. The whole unit can be traversed through 240º (120º left and right of the centreline) and elevated though an arc of 30º between -60° and -30º, both at the rate of 60° per second; for daylight use the TADS includes direct-view optics, a daylight TV camera, a laser ranger and designator, a laser spot tracker and an automatic tracking function, while for night use it has a FLIR sensor. This provides data to the co-pilot/gunner (through his cockpit displays or the Integrated Helmet And Display Sight System which slaves the weapon to the operator’s line of sight), allowing him to designate targets which are then engaged by the cannon via the fire-control system, the latter providing the necessary with range, bearing and other information.

The operation of the gun and feed arrangements are controlled by a Lear Siegler system that re-aims the gun 10 times per second to compensate for recoil effects, and the result is extreme accuracy to the maximum effective range of the cannon.