The Centurion battle tank proved itself very adaptable for conversion to roles other than that of the gun tank, and this resulted in a multitude of designations in the FV (Fighting Vehicle) series. The earliest of these, in designation sequence, was the FV3802, which was a self-propelled 25-pdr (3.45-in/87.6-mm) artillery prototype based on Centurion. The engine was at the rear as in the gun tank, but there were only five rather than six road wheels on each side. The gun/howitzer was fitted in a barbette and was capable of traverse 45° left and right of the centreline. The FV3802 concept was accepted in 1954, but the type was abandoned two years later in favour of the more capable FV3805. This was a self-propelled 5.5-in (139.7-mm) gun, again on Centurion but with a considerably more potent piece of ordnance, the engine relocated to the front of the hull and the driver positioned over the track guard. The FV3805 programme was terminated during 1960 in favour of the lighter and cheaper FV433 Abbot with a 105-mm (4.13-in) gun.

The FV4003 was the five-man Centurion Mk 5 AVRE 165, a 1963 AVRE (Armoured Vehicle Royal Engineers) vehicle for assault pioneer tasks. The vehicle was fitted with a 165-mm (6.5-in) low-velocity demolition gun that could fire a 60-lb (27.22-kg) HESH (High Explosive Squash Head) projectile out to a range of some 2,000 yards (1830 m) for the breaching of obstacles. The FV4003 was also fitted with a hydraulically operated dozer blade or a mine plough, and could carry a fascine bundle or a roll of metal Class 60 Trackway, or alternatively could tow the Viper mine-clearance equipment or a trailer. This variant was last used in the 1991 ‘Gulf War’.

The FV4004 Conway, otherwise the Self-Propelled Gun, 120 mm, L1 Gun, Mk 3, was a prototype based on the hull of the Centurion Mk 3 hull but armed with a 120-mm (4.72-mm) L1 rifled gun in a turret made from rolled plate. The Conway was planned only as an interim type to serve until the Conqueror heavy tank entered service. One Conway prototype was built before the project’s cancellation in 1951.

The FV4005 Stage 2 was an experimental tank destroyer armed with a 183-mm (7.2-in) high-velocity gun. The project was begun in 1951/52, and by July 1955 had a lightly armoured, fully enclosed and traversable turret on the basic Centurion hull. By August 1957 the tank destroyer project had been discontinued and the prototype dismantled. 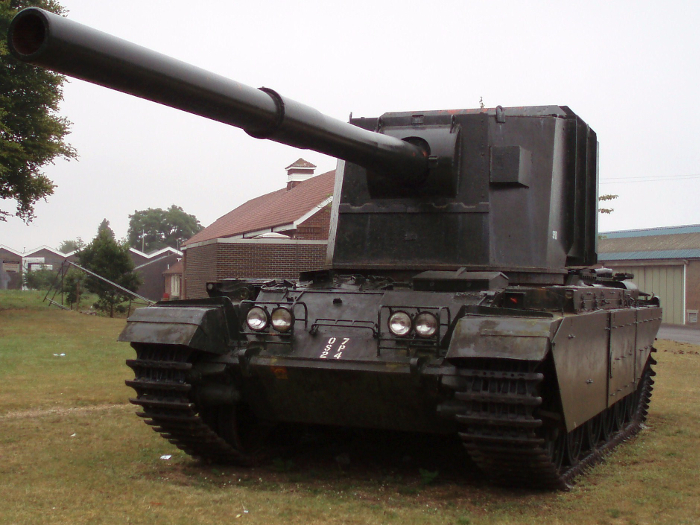 The FV4006 Centurion ARV Mk 2 of 1956 was the Centurion Mk 1, 2 or 3 with the turret removed and replaced by a superstructure housing a winch to create an armoured recovery vehicle. The winch was powered by an auxiliary engine and could pull a load of up to 90 tons using a system of blocks, and a limited defensive capability was provided by the installation of a single 0.3-in (7.62-mm) machine gun on the commander’s cupola.

The designation FV4008 was accorded to the Duplex Drive Amphibious Landing Kit, which comprised 12 lightweight panels forming a skirt round a permanently fixed deck and jettisoned by the detonation of small explosive charges.

The FV4010 was the Heavy Tank Destroyer Guided Weapons Carrier, and was the launcher for Malkara anti-tank missiles.

The designation FV4015 was applied to the Centurion Mk 9.

The FV4016 Centurion ARK of 1963 was the armoured ramp carrier. Built on the Centurion Mk 5 hull, the vehicle was itself part of the bridge with ramps opened to front and rear allowing the bridging of a gap up to 75 ft (22.86 m) wide. The load capability was 80 tons.

The designation FV4017 was applied to the Centurion Mk 10.

The FV4018 Centurion BARV of 1963 was the beach armoured recovery vehicle, and also the last Centurion variant to be used by the British army before the entry into service of the Hippo based on the chassis of the West German Leopard 1 main battle tank. As of 2003, one FV4018 was still in use by the Royal Marines.

The FV4019 Centurion Mk 5 Bulldozer of 1961 was a Centurion Mk 5 equipped with a dozer blade identical to that of the Centurion AVRE. One such tank was usually allocated to every Centurion-equipped squadron for a variety of tasks including the rapid creation of hull-down firing positions.

The turret is of all-welded construction proof against 14.5-mm (0.57 in) projectiles over its frontal arc and against 7.62-mm (0.3-in) elsewhere. The commander is seated on the left and the gunner on the right, and each has a gyro-stabilised optical sight with x3 and x10 magnifications for the engagement of surface and air targets. The gunner’s sight has an integral laser rangefinder. Turret functions are achieved electrically, with reversionary manual controls for emergency use, and there is provision for the installation of a diesel-powered electrical generator in the hull so that full firing capability can be retained even with the main engine shut down. Power traverse through 360° is achieved at the rate of 90° per second for coarse slewing, and at 60° per second for tracking.

Located above the turret rear is the antenna for the Marconi 400-series lightweight radar. This is an X/J-band pulse-Doppler equipment using a single antenna for surveillance and target-tracking, and is highly resistant to electronic countermeasures. In the surveillance mode the radar can detect typical targets at ranges to 13,125 yards (12000 m), data being fed to the digital fire-control system for a complete automatic engagement capability in which the gunner is required only to press the ‘Fire’ button. The turret can be fitted with full NBC protection, and is fitted as standard on each side with a bank of four electrically controlled smoke-dischargers.

The only country to have adopted the Marksman turret is Finland, which has seven three-man ItPsv 90 systems to provide low-level air defence for tank battalions, in which they operate as two-vehicle teams organically attached to the headquarters company. The vehicles have an all-day capacity, and there is also a back-up crew to ensure combat survivability. The ItPsv 90 is meant primarily to engage helicopters, low-flying aircraft and unmanned aerial vehicles, though the capability of the cannon and their ammunition also allows the ItPsv 90 vehicles to engage surface and light armoured targets.

The chassis of the ItPsv 90 is the Polish T-55AM tank adapted to accommodate the turret. The AM version was selected as a result of the increased weight of the system, and with 620 hp (462 kW) the T-55AM has more power than the standard T-55.

Israeli variants
In Israeli service the Centurion was known as the Sho’t (tempest), and its variants started with the Sho’t Meteor (Centurion Mk 5) bought in 1959 with the original Rolls-Royce Meteor petrol engine. The Sho’t Kal, Sho’t Alef, Sho’t Bet, Sho’t Gimel and Sho’t Dalet were modernised Centurion tanks with a 105-mm (4.13-in) gun from 1963 and a new powerpack based on the Continental AVDS-1790-2A Diesel engine and the Allison CD850-6 transmission). These entered service from 1970, and by 1974 all Israeli Centurion tanks had been upgraded to Sho’t Kal (Mk 13 armour) and had a pintle-mounted 0.5-in (12.7-mm) heavy machine gun for local defence. The subvariants were designated for the upgrades the Sho’t Kal tanks received during their operational lives, these upgrades including a new turret rotating mechanism, a new gun stabiliser, a new fire-control system and preparations for the installation of the Blazer explosive reactive armour.

The Tempest, operated by Singapore, was the Centurion modernised with Israeli assistance and similar to an Israeli variant with a Diesel engine and new main gun, and possibly with explosive reactive armour.

South African variants
The designation Olifant (elephant) was used in South Africa for Centurion tanks redesigned and rebuilt in South Africa with Israeli assistance, and considered the best indigenous tank design on the African continent. Variants have included the Olifant Semel of 1974 with an 810-hp (604-kW) fuel-injected petrol engine driving a three-speed semi-automatic transmission, the Olifant Mk 1 of 1978 with a 750-hp (559-kW) Diesel engine driving a semi-automatic transmission, the Olifant Mk 1A of 1985 that retained the fire-control system of the original Centurion, but added a hand-held laser rangefinder for the commander and image-intensifier for the gunner, the Olifant Mk 1B of 1991 with torsion-bar suspension, a lengthened hull, additional armour on the glacis plate and turret, a 950-hp (708-kW) V-12 Diesel engine, a computerised fire control system, and a laser rangefinder, and the Olifant Mk 2 with a redesigned turret, new fire-control system and provision for the installation of a 105-mm (4.13-in) GT-8 rifled gun or a 120-mm (4.92-in) smooth-bore gun.