The Arsenal de l’Aéronautique was created in 1936 as the French government nationalised and then rationalised the widely scattered and completely inefficient French aero industry. The new organisation created several advanced warplanes, primarily based on the designation suffix VG as an abbreviation indicating Ingenieur-Général Michel Vernisse and Jean Gaultier, who were the establishment’s head and chief designer respectively. One of the earlier of these types was the VG.30, which was a lightweight fighter designed to compete with the Caudron C.713 Cyclone. Planned with a powerplant of one Potez 12Dc V-12 engine, an air-cooled unit rated at 610 hp (455 kW), the VG.30 was a clean low-wing monoplane of cantilever all-wooden construction with tailwheel landing gear whose wide-track main units retracted into the undersurfaces of wings that had an area of 150.695 sq ft (14.00 m²).

The type recorded its maiden flight in October 1938 with the powerplant of one Hispano-Suiza 12Xcrs V-12 engine, a liquid-cooled unit rated at 690 hp (515 kW), as the Potez 12Dc was not available. The proposed armament was one 20-mm cannon and two 0.295-in (7.5-mm) machine guns, but it seems that this was never installed in this prototype fighter.

The next variant of this basic theme remained only a project, and was the VG.31 with the Hispano-Suiza 12Y-31 inverted V-12 engine rated at 860 hp (642 kW) and wings that possessed an area of 129.17 sq ft (12.00 m²). Research suggested that the performance gains of this model over the VG.30 would be minimal, that handling would be poorer, and that both the stalling and landing speeds would be significantly higher. Next in numerical sequence, but in fact completed after the VG.33, was the VG.32. This was the VG.30 revised with a US engine; the Allison V-1710-C15 inverted V-12 engine rated at 1,040 hp (776 kW). The VG.32 had not been flown when it was captured at Villacoublay as the Germans conquered France in the six-week campaign of May and June 1940.

The VG.33 was thus the first of the VG series to reach what was in effect the production stage, and was a combination of the VG.30 airframe with the powerplant proposed for the VG.31. The VG.33 was based on an oval-section fuselage, and a clean nose entry was ensured by locating the radiator for the engine coolant in a low-drag bath under the fuselage in line with the enclosed cockpit. The VG.33.01 initial prototype recorded its maiden flight in the late spring of 1939 and was delivered for service trials in August of the same year, just one month before the Germans started their invasion of Poland and thereby triggered World War II. The VG.30.02 second prototype was built with a powerplant of one Hispano-Suiza 12Y-45 engine rated at 910 hp (679 kW), but was not assembled in its planned form: the wings were married to the fuselage of the VG.31 to create the VG.33.03 prototype, and the fuselage was used in the creation of the VG.34. After the completion of its trials, the VG.33.03 was sent as the pre-production prototype to the Chantiers Aéro-Maritimes de la Seine, which had received an order for 200 VG.33 aircraft in the C.1 (Chasse mono-place, or single-seat fighter) category shortly after the Munich crisis of the autumn of 1938.

By the time of the German occupation of the Paris region in June 1940, the company had 160 aircraft under construction and had completed 44 aircraft including three additional prototypes. Only about 12 of these aircraft could be flown from Sartrouville before the Germans overran the area, and these were placed in storage at Châteauroux in the unoccupied part of France for possible later use by the Vichy French air force. The aircraft were discovered as the Germans took over the unoccupied zone of France after the Anglo-American landings in French North-West Africa in November 1942. 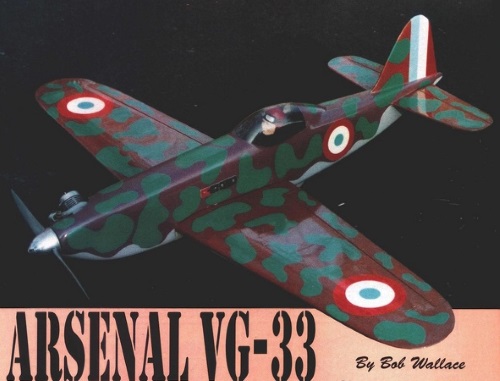 Next in numerical sequence came the VG.35, which was a single prototype conversion from VG.33 standard with the powerplant of one Hispano-Suiza 12Y-51 engine rated at 1,100 hp (820 kW), but before completion this machine was revised to VG.36 standard with a shallower radiator bath: the machine had made only a few flights before the fall of France. The VG.37 was a project with a Hispano-Suiza engine rated at 1,000 hp (746 kW), but this did not reach fruition and the same fate befell the VG.38 with a Hispano-Suiza 77 inverted V-12 engine fitted with two Brown-Boveri turbochargers. The VG.38 was to have been a development with the Hispano-Suiza 12Y-77 engine, but was not built.

France had placed great faith in the VG.30 series, for in addition to actual production of the VG.33 planned to mass-produce the VG.32 (with the fuselage of the VG.36 and the wing of the VG.39 but no 20-mm cannon as this could not be installed in the Allison engine) and the VG.39. Extra production facilities were ordered at the factories of Couzinet and the Société Nationale de Constructions Aéronautique du Nord, but neither of these facilities were ready to begin production at the time of France’s defeat in June 1940.

On the subject of the fall of France, history blogger and Author, Rupert Colley, writes: 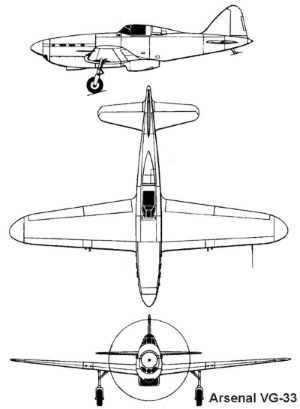 [Photos by Aerofred and Bob Wallace]