The world’s first powered, sustained and controlled aeroplane flight had been made only in 1903 by the Wright brothers. Furthermore, technical developments were made only slowly up to the start of World War I (1914/18),where many pioneers foresaw the emergence of the aeroplane as a weapon. The potential of the aeroplane as a war machine was demonstrated several times in 1910. On 19 January, Lieutenant Paul Beck released sandbags, representing bombs, over Los Angeles from an aeroplane flown by the pioneer aviator Louis Paulhan, and on 30 June Glenn H. Curtiss dropped dummy bombs from a height of 50 ft (15 m) in an area marked by buoys representing a battleship on Lake Keuka. The feasibility of discharging firearms from an aircraft was also revealed on 20 August, when Lieutenant Jacob Earl Fickel of the US Army fired a rifle from a Curtiss biplane at a ground target at Sheepshead Bay, New York. More significantly in terms of future development, a German named August Euler had filed a patent some weeks earlier for a device enabling a fixed machine gun to be fired from an aeroplane. 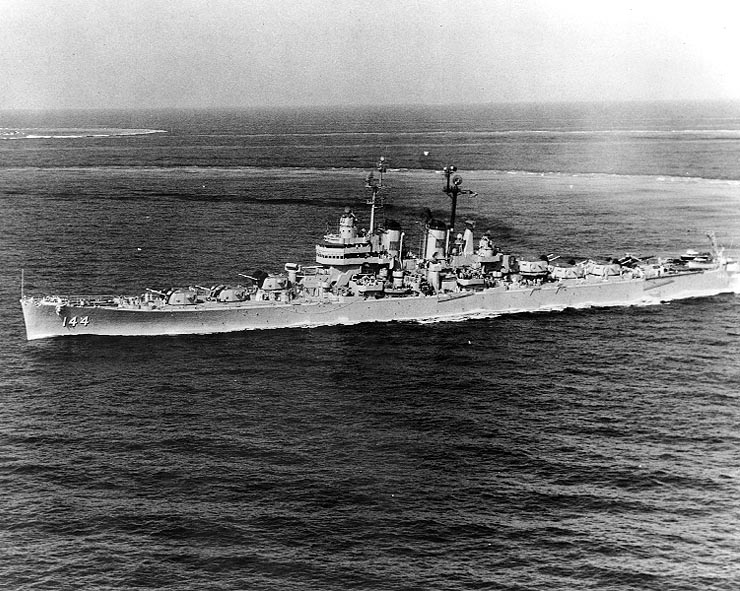 In 1911 the first HE bombs and the first torpedo were dropped from aircraft. On 11 October of the same year the Italians made the first use of aircraft in war in the Turco-Italian war, initially for reconnaissance and then for light bomb drops. On 2 June 1912, the first aerial machine gun trials began, when Captain Charles de Forest Chandler of the US Army Signal Corps fired a Lewis machine gun from a Wright biplane flown by Lieutenant de Witt Milling.

In World War I the main air threat to warships was initially believed to be the airship, which by this time could carry a substantial weight of bombs. However, the aeroplane steadily came to the fore as the platform from which bombs or torpedoes could be released. This led during the war to the addition of limited anti-aircraft armament to larger warships: the British ‘Caroline’ class light cruisers each carried one 13-pdr (3-in/76.2-mm) high-angle gun, while the ‘Cavendish’ class heavy cruisers carried four such weapons.

The threat of the aeroplane to the warship matured in the period between the world wars. This was reflected in the adoption of heavier-calibre primary anti-aircraft guns intended to tackle higher-altitude aircraft, as well as in the number of smaller-calibre weapons, to put up what was fondly believed would be a ‘wall of fire’ through which no aeroplane could penetrate for a low-level attack. The British ‘Exeter’ class heavy cruiser, for example, carried four 4-in (101.6-mm) guns and two 2-pdr ‘pom-pom’ multi-barrel weapons.

What no one had adequately appreciated was the advent of the dive-bomber. These carried a point-accuracy bombing capability that could help supplement the area bombing efforts of the higher-altitude bombers and the point-accuracy capability of the low-level bomber armed with torpedoes. The capabilities of all three aircraft types improved as the war progressed, and all available deck area on existing ships was gradually filled with a mass of weapons in the calibres between 20 and 40 mm to tackle low-level attackers.

Another option was the development of cruiser class with a true dual-role capability against air and surface targets. Their main guns could be elevated to high angles of fire against aircraft. They were installed in fast-traversing turrets able to follow their high-velocity targets in two dimensions with the aid of increasingly sophisticated radar and optical fire-control systems. Among the first of this new breed were the British ‘Dido’ class light cruisers, in which the main armament comprised 10 5.25-in (133.4-mm) high-velocity guns in five twin turrets, as well as two quadruple ‘pom-pom’ mountings.

The theatre in which air attack became predominant, however, was that in the Pacific where the US navy battled with the Imperial Japanese navy. The Japanese had initially believed in the winning of the naval war in a climactic engagement between the Japanese and US surface fleets. However, as Japan’s aircraft carrier strength was decimated and the US forces moved closer to the Japanese bases, what transpired was the Japanese expenditure of vast numbers of aircraft in level bombing, dive-bombing, torpedo attack and kamikaze suicide attacks.

The US Navy had a good medium-calibre dual-purpose weapon in its 5-in (127-mm) L/38 gun fitted in single or twin mountings in most ships. To this they added vast numbers of 20-mm and 40-mm cannon in single, twin and quadruple mountings. The combination of these three weapon types allowed US task forces, task groups and task unit to generate huge volumes of fire at every reasonable altitude between the zenith and sea level.

Even so, there were calls for a class of light (yet substantial) cruisers with large-calibre main armaments able to engage air as well as surface targets.

Last throw of the dice

The result was the ‘Worcester’ class of light cruisers. These were based on what was functionally enlarged designs of the ‘Atlanta’ class, but carrying a new 6-in (152-mm) dual-purpose gun – the first gun of this calibre able to undertake the effective engagement of aircraft. Originally planned as repeats of the closely related ‘Cleveland’ and ‘Fargo’ classes, the ‘Wichita’ class ships emerged as considerably longer and heavier.

Worcester was formally started as a project by the Bureau of Ships when a request for designs was made by the General Board on 13 May 1942. The design process resulted in the proposal of no fewer than 10 different design schemes, and the final design differed from the tenth design scheme’s sketches.

The ‘Worcester’ class design was intended to fulfil several operational requirements. It was designed to combine the destroyer’s speed and manoeuvrability with the cruiser’s size and firepower, making it capable of handling air as well as surface surface targets. The design embodied many of the lessons learned during Word War II, as hard-hitting dual-purpose cruisers able to undertake scouting operations and lead a flotilla of destroyers, and also able to keep the sea in almost any weather. The design provided the fuel bunkerage for long deployments, armour protection against gun fire, and a main armament capable of out-reaching and out-hitting Japan’s cruisers as well as repelling massed air attacks. 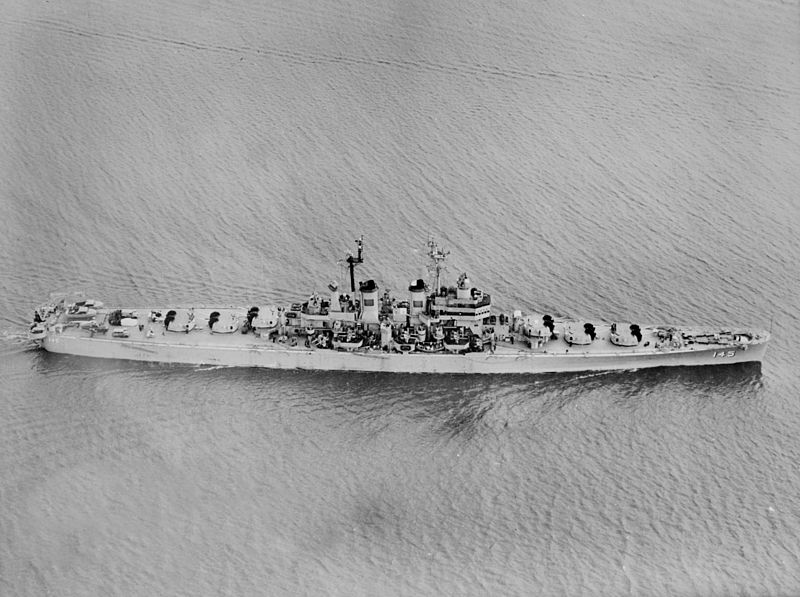 The main battery consisted of 12 6-in (152-mm) L/47 Mk 16 dual-purpose guns in six two-gun centreline turrets (three forward and three aft) controlled with the aid of four high-angle director control towers disposed in the lozenge arrangement which experience had revealed to by ideal for the control of large numbers of anti-aircraft weapons fighting attackers from any quarter. There was no secondary battery as the six twin main armament turrets were of the dual-purpose type, and this greatly simplified the fire direction task. At commissioning in June 1948, Worcester’s 3-in (76.2-mm) L/50 Mk 27 secondary guns were not installed (six 20-mm mounts were installed for gunnery practice during the shakedown cruise), but these guns were installed early in 1949 and the 20-mm mounts were removed: there were five 3-in (76.2-mm) Mk 27 twin mounts on each beam and one the bow, and two single Mk 33 weapons were fitted on blisters on each side of the stern for a total of 24 3-in (76.2-mm) guns.

At her commissioning, Worcester carried single SR-2, SR-6, SG-6 and SP-1 radars, the SR-2 and SG-6 equipments on the main mast, the SR-6 on a mast just forward of the rear stack, and the SP-1 on the after mast. The SR-2 proved to be inadequate, and was later replaced by the SR-6 from the mast ahead of the after stack, which was in turn removed. The fire-control radars were two Mk 13, four Mk 25, four Mk 35 and six Mk 27 equipments mounted in each of the 6 main turrets. There were also individual radars on the bow and stern 3-in (76.2-mm) gun mounts for a total of 19 fire-control radars.

The original plan was for 10 ships of the ‘Worcester’ class to be built by New York Shipbuilding, but only two were laid down in World War II as Worcester on 29 January 1945 and Roanoke on 15 May in May 1945. The remaining eight ships were cancelled in March 1945, considered superfluous at a time when World War II was clearly drawing to a close.

The gun-armed anti-aircraft cruiser was by this time seen as a dead-end in cruiser design, and so these two revolutionary warships never had a chance to prove themselves in their intended role. The large-calibre automatic gun turned out to be unreliable, and as aircraft speeds increased and as smaller and more agile fighter-bombers became more common, it became obvious that missiles or smaller-calibre guns offered greater potential for the defence of a task force against air attack.

Too late for the war for which they were intended, the ‘Worcester’ class cruisers were obsolete at the time they were commissioned, and were not much liked because of their ‘wetness’, resulting from the low freeboard which represented an attempt to reduce the ships’ great bulk. Unlike the three heavy cruisers of the ‘Des Moines’ class, the two ‘Worcester’ class light cruisers find a second career to prolong their useful lives. 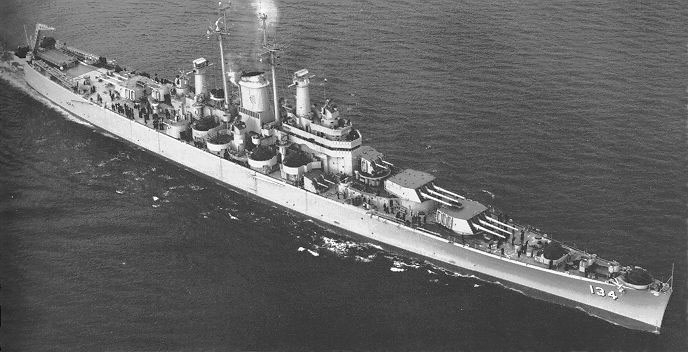