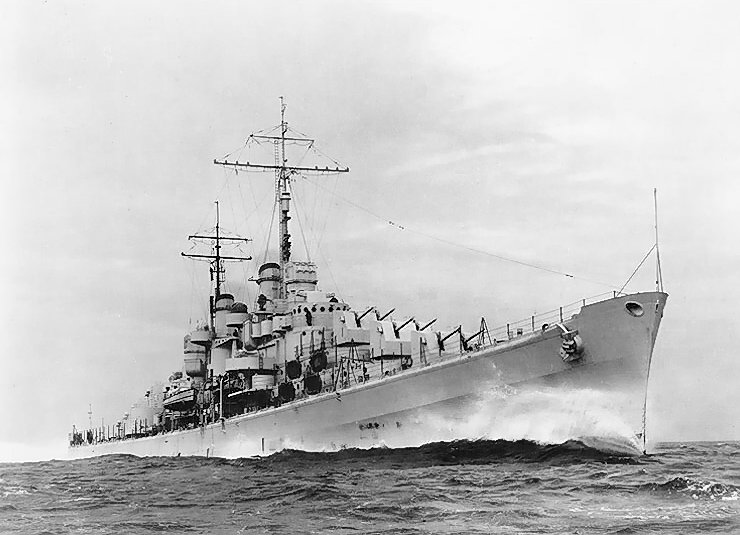 Intended to serve as destroyer flotilla leaders, four ‘Atlanta’ class light cruisers were authorised during the US Navy’s accelerated build-up in the period before World War II. Armed with 16 5-in (127-mm) L/38 guns in eight twin turrets, the ships had the firepower of three destroyers, and in service operated largely as anti-aircraft platforms, so successfully that the surviving ships were reclassified as CLAA (anti-aircraft light cruiser) vessels in 1949.

The class was schemed as a replacement for the ‘Omaha’ class of the 1920s, and was developed to meet the need for a vessel of light displacement and high speed with the primary mission of combating large-scale attack by aircraft, but the secondary mission of fulfilling other types of light cruiser duty. The ships’ initial purpose was not only that of an anti-aircraft cruiser but that of a small and fast scout cruiser which could operate in conjunction with destroyers on the fringes of the battle line – in addition to operating in the defence of the battle line against destroyer and aircraft attack. While they were not designed to fight successfully against heavier ships, the ‘Atlanta’ class light cruisers were well suited to close surface action in bad weather and/or poor visibility, and also to night actions, in which their fast-firing main guns and eight 21-in (533-mm) torpedoes could be used as an advantage.

In 1935, an experimental modernisation was carried out by the Royal Navy on two British light cruisers of World War I design origin, Coventry and Curlew. Their main armament of five 6-in (152.4-mm) guns was removed and replaced by an arrangement of 10 4-in (102.4-mm) anti-aircraft weapons in single mounts ‘for use in the Mediterranean as AA escorts’. Considering how little experience then existed to show how important anti-aircraft defence was to a fleet, the idea of a specialised anti-aircraft ship raised a surprising degree of enthusiasm in the Admiralty. At the time a new 5.25-in (133.4-mm) dual-purpose gun was being developed for the new ‘King George V’ class battleship, and a new small cruiser was designed as the ‘Dido’ class, to carry 10 such L/50 guns in five twin turrets on a full-load displacement of about 6,850 tons. The ships’ steam turbines delivered 62,000 shp to four shafts for a speed of more than 32 kt and a range of 4,900 miles (7885 km) at a cruising speed of 16 kt. The design was adapted from that of a more conventional light cruiser type, the ‘Arethusa’ class, whose units were successful as flotilla leaders. The ‘Dido’ class ships were ordered in 1939 and 16 were completed, though construction of the ships outstripped production of the 5.25-in (133.4-mm) guns, so some of the vessels were commissioned with only four turrets (two of them with 4.5-in/114.3-in guns) and others later had one of their turrets removed.

The first four US ships were completed to the baseline ‘Atlanta’ class standard, while the following seven were to the improved ‘Oakland’ subclass standard with slightly different armament as they were further optimised for the anti-aircraft role. With eight 5-in (127-mm) L/38 guns, the four ‘Atlanta’ class ships had by far the heaviest anti-aircraft armament of any cruiser of World War II, and were also the smallest US cruisers of that conflict.

Of the eight ships completed in World War II (the other three were completed in 1946), two were sunk in action. These were Atlanta and Juneau, both at the Naval Battle of Guadalcanal. The other ships were deactivated comparatively soon after the end of World War II and were scrapped in the 1960s and early 1970s. 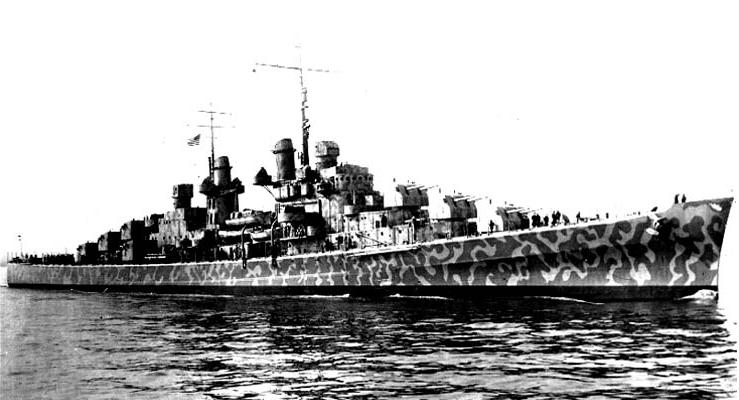 As completed, the four initial ships carried a main armament of eight 5-in (127-mm) L/38 dual-purpose guns in four twin mounts: this battery could fire more than 17,600 lb (7983 kg) of shells per minute, the ammunition types including the radar-fused VT anti-aircraft shell which proved so successful in defeating massed Japanese air attacks. Fire control was entrusted to a pair of Mk 37 fire-control systems located on the centreline above the superstructure. As built, the ships lacked radar, but in 1942 Mk 4 fire-direction radar was retrofitted, though from the following year this was replaced by the improved Mk 12/Mk 22 combination.

The first four ships also possessed an initial secondary anti-aircraft armament of 12 1.1-in (27.9-mm) guns in three quadruple mountings, initially without directors. By early 1942 increased production made its feasible to add a fourth quadruple mount on the quarterdeck, and directors were fitted. However, by a time late in 1942 these troublesome and relatively ineffective weapons were steadily replaced in the surviving ships by the newer and far superior Bofors 40-mm anti-aircraft gun in twin mountings with Mk 51 directors. From a time early in 1942, the close-range anti-aircraft armament was augmented by eight Oerlikon 20-mm rapid-fire cannon in Mk 4 single mountings disposed as two on the forward superstructure, four amidships between the funnels and two on the quarterdeck. From 1943 onward the number of these mounts was increased by the addition of two more on the forward superstructure and a pair on each side of the second funnel to offset the increasing threat of Japanese air attack, especially by kamikaze aircraft. As they became available from a time late in 1943, a quadruple Bofors 40-mm mounting replaced the twin mount on the quarterdeck, the six depth-charge projectors being landed as compensation. However, it should be admitted that the steady addition of radar, more close-range anti-aircraft guns and other equipment seriously impaired the ships’ stability and also resulted in overcrowding as more men had to be added to the ships’ complements to man the additional weapons.

The second group, sometimes known as the ‘Oakland’ class, was commissioned with 12 rather than 16 5-in (127-mm) guns in six six twin mounts and with Bofors guns from the start, with four additional twin Bofors 40-mm mounts by comparison with their predecessors: two displaced the former 5-in (127-mm) wing turrets, which improved the ships’ stability and close-range anti-aircraft firepower while easing congestion, and two between the funnels displacing the previous two pairs of Oerlikon 20-mm cannon. Additionally, the 20-mm battery was increased to a total of 16 such weapons with a pair of them on the bow, four on the forward superstructure, eight amidships as four on each side of the after funnel, and two on the quarterdeck.

By the end of the war, Oakland had been given an anti-kamikaze upgrade: this included the replacement of the four aft Bofors twin mountings with quadruple mountings, and the reduction of the 20-mm mounts to as few as six, though each with twin rather than single cannon. Reduction of topweight was improved by the landing of the two quadruple torpedo tube mountings, which had been the only such mountings on US Navy cruisers commissioned during World War II.

Although the ships had been planned as destroyer flotilla leaders, the original design did not include anti-submarine sensors or armaments such as sonar or a depth-charge battery. Early in 1942, however, the anti-aircraft and radar upgrades were complemented by the addition of sonar and the standard destroyer battery of six depth-charge projectors and two stern-mounted depth-charge tracks. When it was decided that the ships were more valuable as anti-aircraft vessels, the projectors were removed but the tracks were retained. The ships of the ‘Oakland’ subclass were never fitted with the projectors, but were fitted with the two stern tracks.

Search radar was not fitted to the early ships as built, but from spring of 1942 they were refitted with SC-1 and then SG search and Mk 4 radar for fire control. As the war progressed additional and more modern radars were added.

The class was powered by four Babcock & Wilcox boilers supplying steam to two Westinghouse geared turbines delivering 75,000 shp 55920 kW) to two shafts for a sustained maximum speed of 33.6 kt. The bunkers carried 1,360 tons of oil for a range of 9,800 miles (15770 km). Given its role, the ‘Atlanta’ class cruiser was designed with only limited armour protection: 3.75-in (95-mm) belt and bulkheads, and 1.25-in (31-mm) deck, bridge, gunhouses and magazines.

Although very formidable as anti-aircraft ships, the ‘Atlanta’ class cruisers did do well in surface combat, the only two ships of the class which did become involved in such combat being sunk: these were two of only three US light cruisers sunk in World War II. Both of the ‘Atlanta’ class ships succumbed to Japanese torpedoes and the gunfire of larger and more heavily armed ships.

While praised for the number and disposition of its primary anti-aircraft battery, the ‘Atlanta’ class was criticised for its shortage of gunfire directors, which severely limited the capabilities of the primary battery, and also for its early lack of potent secondary and tertiary anti-aircraft batteries. The latter criticism was addressed, though only to an extent in naval shipyards by the end of 1942, but result was that the ships were then top-heavy, which was a problem overcome only in the last three ships (Juneau (ii), Spokane and Fresno), all built by the Federal Shipbuilding and Drydock Company and commissioned between February and November 1946, after the end of World War II.

The ‘Atlanta’ class proper comprised Atlanta, Juneau (i), San Diego and San Juan built in pairs by Federal and the Bethlehem Steel Corporation for commissioning in 1942.  The following four ships, commissioned between December 1942 and February 1945, were Oakland, Reno, Flint and Tucson, all built by Bethlehem.

After World War II, the six surviving ships of the two original subclasses were decommissioned between 1947 and 1949 and placed in reserve. None of the ships was recommissioned to serve in an active role, and all had been stricken by 1966 and then scrapped. 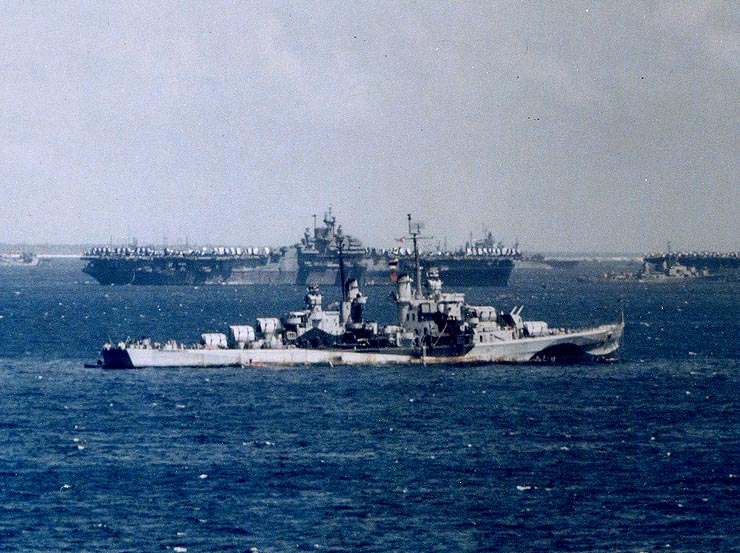