Now a General Dynamics product although it was designed and originally manufactured by General Electric, the 20-mm M61 Vulcan is the most widely used aircraft cannon of the Western world, and was the first member of General Electric’s family of ‘Gatling’ externally powered rotary-action weapons. Design of the cannon began in 1950 within the context of Project ‘Vulcan’ after the start of conceptual analysis in 1946, when the US Army Air Forces (from the following year the US Air Force) began to appreciate that conventional single-barrel weapons of the day were reaching the limits of their practical firing rates. The desire for greater firing rates could be provided only by batteries of multiple cannon, which were heavy and difficult to install, or from potentially more effective multi-barrel weapons. The latter are based on a group of rigidly linked barrels turned (by a special rotor assembly) around a common longitudinal axis in front of a stationary gun housing. The bolt associated with each barrel is fitted with a cam follower which rides in a track machined inside the rotor housing, so that while one barrel is being fired the others are each at a different part of the clearing/reloading cycle leading to the firing of the next round from that barrel. It was also evident from the beginning of the program that such an operating method would possess the advantages of reduced heating and wear of individual barrels. The General Electric system usually employs external power to ensure that the weapon continues to function effectively despite varying chamber pressures and the occasional misfire.

The current M61A1 model dates from 1956, when General Electric realised that the problems it was encountering with linked feed systems were basically insuperable at the firing rates being attained, and therefore turned to a linkless feed arrangement: this is sometimes of the single-ended (case-ejecting) variety, designed to eject spent cases and unfired rounds, but more commonly of the double-ended (closed-loop) variety in which the powered ammunition conveyor belt carries the spent cases and unfired rounds back to the magazine (where they are deposited at the entrance end of the drum) before the conveyor moves to the exit end and collects fresh rounds.

The ammunition is stored between radial partitions and slowly moved to the exit end of the magazine by a helical (Archimedean) screw arrangement driven by the gun motor.

The first installation of the Vulcan was on the Lockheed F-104 Starfighter interceptor, and trials soon confirmed that a single weapon of this type offered many advantages over the alternative of a multiple battery of guns. The Vulcan has thus become the primary fixed armament of US fighters designed from the mid-1950s onwards, the size of the weapon and its feed system/ammunition magazine dictating the design of individual installations for each type. 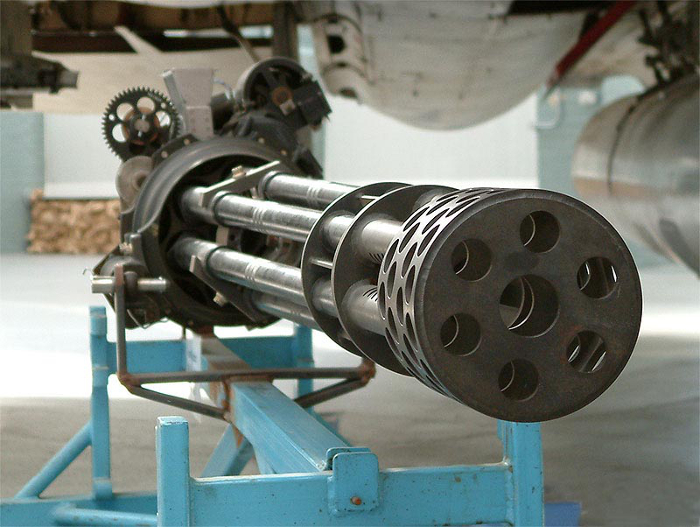 Lightened model
In 1984 General Electric began work on a Lightweight M61 cannon, which was planned as a version offering significantly lower weight than the M61A1 but retaining full interchangeability of components with the baseline weapon. The weight reduction target set for the design team was 46 lb (21 kg), and this impressed the USAF sufficiently for the service to become involved from 1988 with the funding for components to be produced for qualification testing, which was completed in 1989 and resulted in the M61A2 production weapon turning the scales at only 205 lb (93 kg). Surprisingly enough, the primary weight saving was achieved in the barrels. This was made possible by the reduced demand for cannon firing in modern warplane applications, which had permitted a reduction in magazine capacity and thereby resulted in a requirement that each barrel be capable of sustaining a continuous burst of only 600 rounds rather than the 1,000 rounds that were demanded at the time of the Vulcan’s design. Other weight savings were achieved by additional machining of forged parts to remove metal required in the forging but not needed for structural purposes, and the redesign of some castings to produce lighter versions of M61A1 parts. The opportunity was also taken to upgrade the fire-control system to the EGS (AIMGUNS) standard for an enlargement of the cannon s effective engagement envelope; to incorporate a new ammunition feed system capable of handling the original M50 series of rounds and also the new PGU-28/B SAPHEI with its option of brass or aluminium alloy cases, the latter reducing the mass of 500 rounds by 88 lb (40 kg); and to offer a choice of two barrel lengths with the standard 5 ft 0 in (1.52 mm) units replaceable by 6 ft 7 in (2.01 m) barrels.

The first application of the M61A2 was in the AIDC F-CK-1 Ching-kuo fighter of the Taiwanese air force, but the weapon was also being retrofitted in a number of Boeing (McDonnell Douglas) F/A-18C/D fighters, and was also selected as the inbuilt cannon for the F/A-18E/F Hornet and Lockheed/Boeing F-22 Rapier.

Fighting Falcon installation
Fielded in the largest numbers on the General Dynamics F-16 Fighting Falcon used by many air forces, the Vulcan installation is located in the port leading-edge root extension with the gun port on the upper surface of the extension and the transversely aligned horizontal magazine drum inboard of the gun’s breech mechanism. The whole assembly is 7 ft 6.5 in (2.30 m) long while the magazine assembly is 1 ft 10.5 in (0.57 m) in diameter and contains 512 rounds. The magazine drum is fitted with a de-linking mechanism that interfaces with two AGE external loaders and strips the links from the belted ammunition before the rounds are introduced into the magazine; the system can also be interfaced with the Linkless Ammunition Loading System for reduced turnaround time.

The same type of lightening exercise was undertaken on the F-16’s Vulcan installation as on the Boeing (McDonnell Douglas) F-15 Eagle, so the characteristics of the hydraulically powered system include a gun weight of 252 lb (114.3 kg), a double-ended (closed-loop) feed system weight of 380 lb (172.4 kg) and an ammunition weight of 528 lb (239.5 kg) for an overall weight of 1,160 lb (526.2 kg). The reliability of the installation is 15,000 mean rounds between failures, and the time required for the gun to accelerate to or decelerate from the maximum firing rate of 6,000 rounds per minute is between 0.4 and 0.45 second. An alternative rate of 4,000 rounds per minute can be selected by the pilot.