Where the first US stand-off nuclear missile to reach operational status, the Bell GAM-63 Rascal, was a rocket-powered weapon of typical ‘missile’ configuration, an early Soviet counterpart was of turbojet-powered aeroplane layout. This was the Raduga Kh-20 which, in the absence of firm intelligence data about its real designation, received the NATO reporting designation/name AS-3 ‘Kangaroo’.

As such, the Kh-20 was a cruise missile, and was created under the supervision of Mikhail I. Gurevich, known primarily as the designer of manned fighters, for carriage by and launch from the Tupolev Tu-95 ‘Bear’ turboprop-powered strategic bomber. Development of the weapon started in 1954, and the missile’s design drew heavily on the designer’s experience with the MiG-17 ‘Fresco’ high subsonic and MiG-19 ‘Farmer’ supersonic fighters, and in 1955 two Tu-95 bombers were converted into Tu-95K missile carriers to support the missile effort. Initial testing of the missiles was undertaken with the use of four modified MiG-19 fighters designated as the SM-20/I and SM-20/II for launch aeroplane/missile interface and air-launch testing purposes, and the SM-K/I and SM-K/II for guidance system and ground-launch testing purposes.

The first launch of the SM-20/I from a Tu-95K took place in the autumn of 1956, and one of the most difficult problems to overcome in the early phases of development was how to start the missile’s Lyul’ka AL-7F turbojet engine after prolonged passive carriage in the very cold air of the atmosphere at high altitude. Flight trials of the Kh-20 began on 17 March 1958, the first launch was not successful, and the missile’s range and accuracy failed to reach the required figures. This resulted, at least in part, from the fact that the weights of the warhead and guidance system were considerably greater than the missile design team had been told to expect: the guidance system was of the inertial type with provision for radio upgrade, and the thermonuclear warhead, with a yield of between 800 kilotons and 3 megatons, weighed something in the order of 5,070 lb (2300 kg).

The weapon was of aeroplane configuration with a tapered cylindrical fuselage, an anhedralled  swept wing and swept tail surfaces, the latter including a short vertical fin (to facilitate semi-internal carriage in the lower fuselage of the Tu-95) and a low-aspect-ratio ventral fin. The missile’s official trials were undertaken between 15 October 1958 and 1 November 1959. There were 16 launches, and of these 11 were deemed successful (though accuracy still inadequate), allowing the Kh-20 to enter service in 1960 in the initial form of the Kh-20M with an improved nuclear warhead. Production amounted to some 130 missiles, which was sufficient for two missiles for each of about 40 Tu-95K-22 and 25 Tu-95KD aircraft. The load was later reduced to one missile per aeroplane. 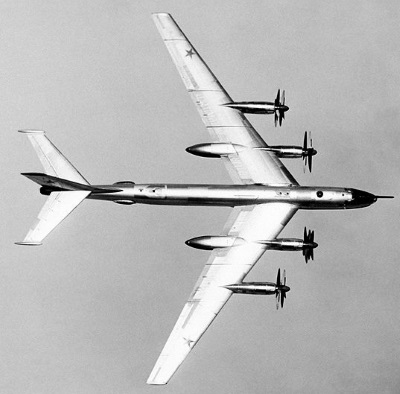 The Kh-20 had been created as an instrument of retaliation against major US targets. Then, given the fact that it took 22 hours to arm a Tu-95 with the Kh-20 and that it was difficult to store the missile’s early-generation nuclear warhead, it was decided that the missile was not suitable for the first-response role, and it was relegated to secondary strikes on targets which had survived an initial strike, and also against naval task groups centred on an aircraft carrier. The time required to arm a Tu-95 with a Kh-20 was later trimmed to four hours and reliability was markedly improved. However, the poorest feature of the Kh-20 was its guidance system, and a high degree of targeting accuracy required manual guidance, which was vulnerable to jamming.

An attempt to adapt the Myasishchev M-4 ‘Bison’ turbojet-powered bomber for the carriage and launch of the Kh-20 was unsuccessful as a result of the missile’s considerable size.

By a time late in the 1970s it had been recognised that the Kh-20 was no longer capable of penetrating modern air defences, and by the mid-1980s the Kh20 had been replaced by the Raduga Kh-22 (NATO designation/name AS-4 ‘Kitchen’). 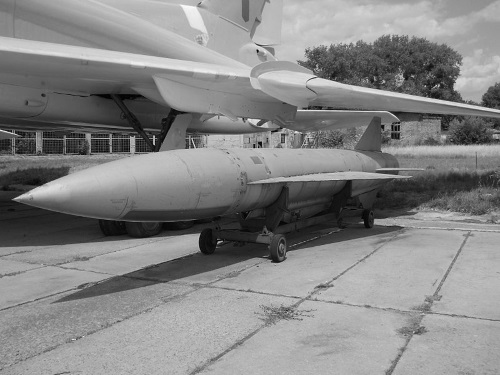