The designation Iosif Stalin was used for a series of Soviet heavy tanks developed as a successor to the KV series in World War II, and was created under the leadership of Zh. Kotin and N. Dukhov to provide the Soviet forces with a very heavy tank able to survive the fire of the German 88-mm (3.465-in) PaK 43 anti-tank gun and related weapons, and to carry a main gun firing a projectile able to defeat the German Panther battle and Tiger heavy tanks. However, the IS was intended not primarily as an anti-tank vehicle but as a breakthrough tank whose main gun could fire a heavy HE shell in attacks on prepared defences and bunkers.

In the first years of the ‘Great Patriotic War’ with Germany, crews of the KV-1 approved of the tank’s protection but criticised its poor mobility and its lack of a primary armament heavier than the 76.2-mm (3-in) gun of the T-34/76 medium tank. As far as the Soviet leadership was concerned, the KV-1 was also considerably more expensive than the T-34 to manufacture, but without offering greater combat performance. This dissatisfaction was reflected in the Soviet leadership’s decision that some of the KV-1 assembly lines should change to production of the T-34 production. In 1942 the KV-1’s limitations were reduced by the introduction  of the lighter and faster KV-1S tank, though this type was itself gradually superseded in production by the SU-152 self-propelled 152-mm (6-in) gun and disappeared from production in April 1943.

The capture of a Tiger heavy tank in January 1943 persuaded the Soviets to order the development of a new heavy tank, initially designated Object 237. As a result of the extremely fierce armoured warfare in the summer of 1943, which included the climactic Battle of Kursk, Dukhov’s team was ordered to create an interim upgraded version of the KV tank as the KV-85 with an 85-mm (3.35-in) gun derived from the 52-K weapon of the SU-85. The derived weapon was the D-5T, and this fired a projectile able to pierce the armour of a Tiger I tank at a range of 1,095 yards (1000 m). The KV-85 was in fact a modified KV-1S hull carrying the Object 237 turret. The revised armament required an increase in the diameter of the turret ring though the addition of lateral fillets on the hull; the radio operator was omitted so that his position could be used for the insertion of a rack for the larger 85-mm (3.35-in) ammunition; and the hull-mounted machine gun was transferred to the opposite side of the driver position and fixed for operation by the driver.

Before the end of 1943, therefore, the Soviets were able to produce a heavy tank as well armed as the Tiger I. There was a short production run of 148 KV-85 tanks, which made their combat debut in September 1943, and production ended in December of the same year.

The Object 237 prototype, evolved from the cancelled KV-13, had meanwhile been accepted for production as the IS-85 heavy tank, with deliveries and combat service starting in October 1943. Production lasted only to January 1944, and the designation was simplified to IS-1 after the introduction of the IS-122, which was itself redesignated as the IS-2. 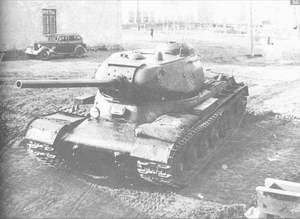 After they had evaluated the A-19 and BS-3 guns, the Soviets selected the former as the D-25 main armament of the new tank, primarily because of its ready availability and the capability of its HE shell against German fortifications. On the debit side, however, the A-19’s use of separate-loading ammunition resulted in a lower rate of fire and a reduced ammunition capacity, which were both  disadvantages in tank-versus-tank engagements. The gun was very powerful, and while its 122-mm armour-piercing shell had a lower muzzle velocity than late-issue German 75-mm (2.95-in) L/70 and 88-mm (3.465-in) L/71 guns, Soviet trials established that the D-25T could penetrate the front armour of the Panther tank at 2,735 yards (2500 m), and was therefore adequate in the anti-tank role.

Ammunition: both weighty and bulky

The worst aspect of the D-25 was its low rate of fire as a result of the weight and size of the two components of its separate-loading ammunition. Initially the rate of fire was between 1 and 1.5 rounds per minute, but modernisation and the replacement of the original manually operated screw breech by a semi-automatic drop breech increased the rate to between 2 and 3 rounds per minute or perhaps slightly more. Another limitation imposed by the bulk of the ammunition was that only 28 rounds (eight armour-piercing and 20 HE) could be carried.

The IS-122 prototype was selected as the basis for a heavy tank to replace the IS-85, and entered production as the IS-2. This was slightly lighter and therefore faster than the heaviest KV Model 1942, had thicker front armour and carried a turret of much-improved design. The fact that the new tank could carry armour thicker than that of the KV series, while remaining lighter, resulted from the improved layout of the armour envelope. The KV’s armour was less well-shaped and featured heavy armour even on its rear, while the IS series concentrated its armour at the front. The IS-2 weighed slightly less than the Panther and was considerably lighter than the tanks of the Tiger series. and presented a slightly lower target than the German types.

Western observers tended to criticize Soviet tanks for their lack of finish and crude construction. The Soviets responded that it was warranted considering the need for wartime expediency and the typically short battlefield life of their tanks.

Early examples of the IS-2 can be identified by the stepped front hull casting and a small, opening driver’s visor. The early tanks lacked main armament travel locks or anti-aircraft machine guns, and had a narrow mantlet. The later IS-2 Model 1944 had an upgraded D-25T gun which could be loaded more rapidly, had a double-baffle muzzle brake, and was fired with the aid of a superior fire-control arrangement. The stepped hull front was replaced with a single plate 120 mm (4.72 in) thick and angled at 60°. Other minor upgrades included the addition of a travel lock on the hull rear, a wider mantlet and, on very late models, an anti-aircraft machine gun.

Some sources identify this as the IS-2m, but it is distinct from the IS-2M, which was a modernised version of the 1950s with fittings such as external fuel tanks on the rear rather than the sides of the hull as on the basic IS-2, stowage bins on both sides of the hull, and protective skirting along the upper part of the track runs.

The IS-3 (Object 703) was developed late in 1944 by ChTZ in Chelyabinsk for service from mid-1945. This introduced an enhanced armour layout and a semi-hemispherical cast turret design which became a characteristic feature of post-war Soviet tanks. This lower-silhouette turret provided better ballistic protection, but also reduced the working headroom significantly, especially for the loader, and also limited the maximum depression of the main gun as the gun breech had little room inside the turret to pivot on its horizontal axis. A major tactical limitation resulting from this was that the IS-3 was less able to take advantage of hull-down positions than Western tanks. The IS-3 weighed slightly less than the IS-2 and was 0.30 m (1 ft) lower. 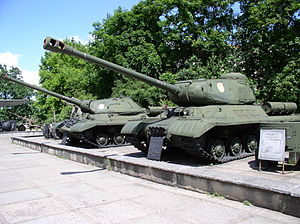