Designed by the Mikoyan-Guryevich Opytnoye Konstruktorskoye Buro (OKB, or experimental design bureau) at its Moscow headquarters, the Ye-150 family was a series of prototype single-seat fighter and interceptor aircraft created from 1955. 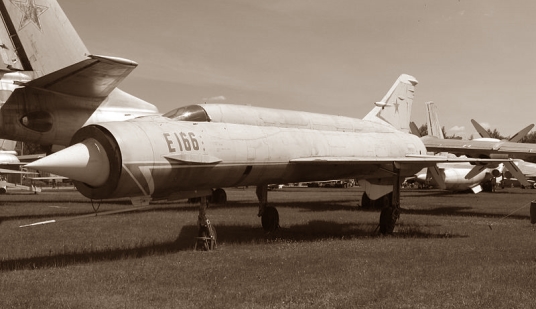 To satisfy a requirement of the Protivovozdushnaya Oborona (PVO, or air defence forces) for a heavy interceptor capable of carrying out automatic interceptions, the MiG bureau had developed a range of large fighter aircraft. The first of these was the swept-wing I-3 series (I-380, I-410 and I-420), which was followed by the I-7 and the I-75. The requirement for a supersonic interception speed and the ability to carry the heavy avionics system drove the size of the design, and by contrast with the contemporary and aerodynamically similar MiG-21F, had a length of 18.14 m (59 ft 6 in) rather than 15.76 m (51 ft 8.5 in) and a weight of 12345 kg (27,216 lb) rather than 4819 kg (10,624 lb).

The Ministerstvo Aviatsionnoy Promyshlennosti (MAP, or ministry of aviation industry) ordered the design bureau to manufacture prototypes of the new interceptor, which was to carry as part of its armament two Grushin K-6, Toropov K-7, Kaliningrad K-8 and Raduga K-9 air-to-air missiles, air-to-air and air-to-surface unguided rockets, or an aimable installation with two cannons. Automatic guidance to the interception point was to be provided by the Uragan-5 (hurricane-5) integrated weapons systems. 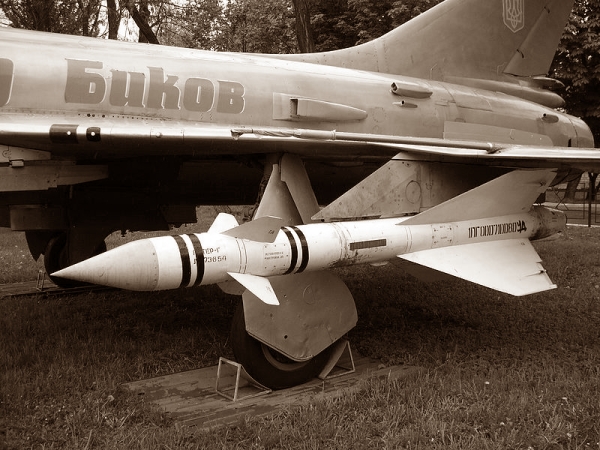 The development of this weapons system was initiated by order of the the Council of Ministers in 1955 to provide high-speed interceptors with the ability to intercept supersonic bombers flying at any altitude between 35 and 82,020 ft (10 and 25,000 m) at a speed of between 865 and 1080 kt (995 and 1,245 mph; 1600 and 2000 km/h) at a range of between 55 and 65 nm (65 and 75 miles (100 and 120 km) from the interceptor base. The system’s core comprised a ground-based radar to guide the interceptor to the interception point and an aeroplane-based radar and weapon-aiming system to complete the mission using the following components.

The elements of the Uragan-5 system were thus a high-resolution ground radar able to provide accurate position and height data at a range of 185 nm (215 miles; 345 km), a SAZO active interrogation system, an automatic guidance facility, a digital control computer, an SPK command data link, an interceptor with airborne radar able to detect the target at a range of greater than 13.5 nm (15.5 miles; 25 km), an autopilot and an SRP weapons aiming computer.

The initial missile-armed version of the new interceptor was the Ye-150, and this recorded its maiden flight on 8 July 1960, after the completion of extensive ground checks of its various systems and a delay occasioned by the late delivery of a flightworthy engine. The flight test programme was slow, largely as a result of the extremely short life of the Tumansky R-15 axial-flow afterburning turbojet engine: this life was only just sufficient for pre-flight ground checks and a single flight. There were also problems with aileron buffet, brake parachute failure and the disintegration of the engine accessory gearbox. The 42 flights completed as the Ye-150’s design bureau’s tests revealed a very high rate of climb, impressive maximum speed including a figure of 1,520 kt (1,750 mph; 2815 km/h) or Mach 2.65 at 68,665 ft (19100 m) at less than full throttle, and a service ceiling of greater than 68,900 ft (21000 m)

No weapons systems was fitted on the Ye-150 and it was not authorised for production, but this prototype paved the way for the development of the Ye-151 and Ye-152.

The Ye-151 cannon-armed version was designed in parallel with the Ye-150, but did not proceed to the hardware stage. The weapon system was to have consisted of two 23-mm TKB-495 or Makarov TKB-539 cannon, with a rate of fire of 2,000 rounds per minute, mounted on a rotating ring in tilting mounts. The mount could tilt ±30° and the mounting ring could rotate 360°, which gave the installation a 60° cone of fire around the centreline of the mounting ring. To accommodate the ring turret the inlet duct was lengthened, with the rotating ring forming the inlet lip. Wind tunnel testing confirmed that the extended inlet duct would actually improve aerodynamic and inlet performance, and this lengthened inlet (without the cannon installation) was retained for all later aircraft of the Ye-150 series. More wind tunnel testing with an inlet mounting fitted with cannon not surprisingly revealed the exertion of destabilising forces when the cannon were deflected, making accurate weapon-aiming impossible and resulting in the termination of the trainable cannon development effort. Studies were carried out with the cannon mounting installed to the rear of the cockpit to reduce the destabilising moment, but this Ye-151-2 was not built.

The two single-engined Ye-152 prototypes were completed with improved R-15-300 engines, as the Ye-152-1 and Ye-152-2, but powerplant reliability remained a major issue, so only limited development flying, weapons system testing and world record flights were carried out. The poor reliability of the engine and the cancellation of the intended K-9/Uragan-5B weapon system ended the Ye-152 programme. Cropped tips on the otherwise pure delta wing, of greater area, made it possible for large K-80 or K-9 missiles to be carried on wing-tip launchers.

The second prototype, the Ye-152-2, was returned to the design bureau for conversion into the Ye-152M. 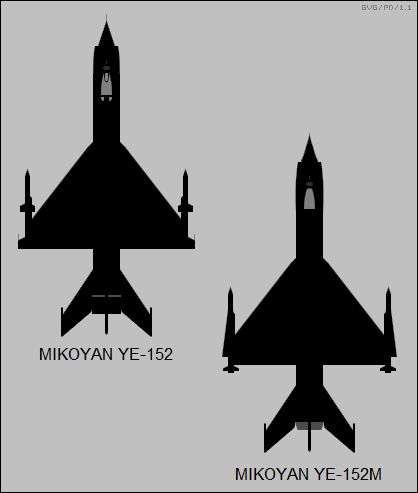 The Ye-152A was a twin-engined version of the Ye-152, sharing the same layout but possessing a powerplant of two Tumansky R-11 axial-flow afterburning turbojet engine installed side-by-side in a revised rear fuselage. This powerplant change was made necessary by the dismally poor reliability of the R-15, and in addition to the widened rear fuselage saw the introduction of a pair of substantial ventral fins. The majority of the airframe was identical to that of the Ye-152, incorporating the extended inlet and fuselage found to be advantageous during testing for the proposed Ye-151 cannon-armed variant. As the R-11 engine was fully developed and reliable, the Ye-152A was ready for flight in July 1959 and continued to fly on test duties at the Mikoyan-Guryevich test centre until it crashed in 1965. The armament was to have been two K-9 missiles as part of the Ye-152-9-V weapon system, which included the TsKB Almaz TsP-1 fire-control radar.

The Ye-152P was a proposed development powered by the more reliable R-15-300 engine and using the Uragan-5B weapon-control system and carrying the large K-80 long-range AAM.

As noted above, the Ye-152-2 was returned to the design bureau’s manufacturing facility for conversion into the Ye-152M, with small canard foreplanes on the sides of the forward fuselage and an R-15-300 engine fitted with axi-symmetric convergent/divergent nozzle, allowing the ejector ring around the rear fuselage to be eliminated. After initial flight testing, the canard foreplanes were removed, though their mounting structures were retained. The aeroplane was used for further testing of the R-15 engine and Uragan weapons system.