With their operational philosophy based on the deep penetration and subsequent exploitation in the enemy’s rear areas, the Soviet forces in the second half of the ‘Great Patriotic War’ (1941/45) emphasised the importance of armoured forces to undertake the exploitation at a pace that could not be sustained by infantry and supporting arms reliant on foot, animal and motorised transport. Tank formations operating on their own were vulnerable to counterattacks by a skilled enemy, such as the Germans, using comparatively smaller armoured and artillery elements, the latter including self-propelled weapons. To provide their own forces with a tank destroyer and assault gun capability, therefore, the Soviets developed the Samokhodnaya Ustanovka (self-propelled mounting) series of self-propelled guns based on well-proved tank chassis and guns. The first of these was the SU-76 that entered service in 1943 as the combination of the chassis of the T-70 light tank with the 76.2-mm (3-in) ZIS-76 anti-tank gun in a fixed barbette allowing a good elevation arc but only a limited traverse arc. Next up the calibre ladder, for service from later in 1943, was the SU-85 that combined the chassis of the superb T-34/76 medium tank with the 85-mm (3.45-in) D-5S gun.

Production of the SU-100 began at Uralmashzavod during September 1944, and by the end of the year about 500 had been delivered to front-line units, which found the new weapon to be especially effective. By the end of World War II in May 1945 more than 1,800 SU-100 vehicles had been built, and the SU-100 had by that time shown itself to be a highly effective weapon with the ability to tackle and destroy the full range of German heavy tanks and tank destroyers such as the Panther, Tiger, Ferdinand, Jagdpanther and Jagdtiger. The SU-100 played a notably important role during the final phases of World War II, and remained the standard support gun for Soviet armoured and mechanised divisions until replaced by the ISU-122 in 1957.

Substantial barbette
As on the SU-85, the gun was mounted in the front of a fixed armoured superstructure with a well-sloped front, slightly less slop sides and an almost vertical rear above and ahead of the engine compartment, which could be flanked on each side by a pair of disposable cylindrical tanks for additional Diesel fuel. This last feature added considerably to the SU-100’s range, but was a decided tactical risk even though the Diesel fuel was considerably less flammable that the petrol used by German, and for that matter Western Allied, vehicles. The gun had an elevation arc of 19° (-2° to +17°) and was laid with a tank gun periscope. Unlike the T-34/85 tank on which it was based, the SU-100 had its driver in a compartment separated from the other crew members by armour plate and, as a result, an internal communication system was necessary. In addition to its distinctively long gun, the SU-100 could be distinguished from its predecessor by the new shape of mantlet and the circular cupola which was attached to the right-hand side of the superstructure top. The basis fuel load was 30 litres (66 Imp gal; 79.25 US gal), and the engine powered rear drive sprockets by means of a gearbox with five forward and one reverse speeds. The suspension was of the Christie type with coil-spring torsion arms, and the use of five large-diameter  road wheels removed the need for return rollers for the tracks, which were 500 mm (19.8 in) wide and each comprised 72 dry loose-pin cast steel links. 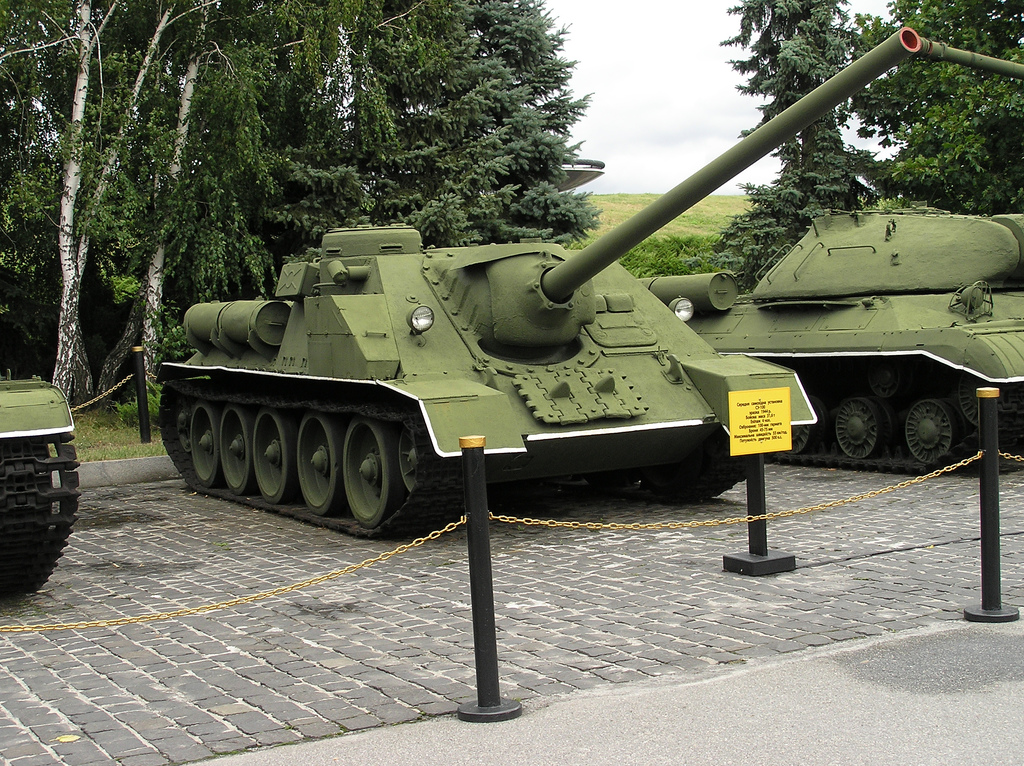 The SU-100 remained the standard support gun for the Soviet armoured and mechanised divisions until their major organisational reorganisation in 1957, when the SU-100 was replaced by the ISU-122 based on the chassis of the IS heavy tank. With their guns removed, both the SU-85 and the SU-100 were employed for some time after World War II’s end as both armoured command and armoured recovery vehicles. In these forms the apertures left by the guns’  removal were covered  by armour plate. SU-100 vehicles were also delivered after World War II to Soviet allies and clients including Albania, Algeria, Bulgaria, China, Cuba, Czechoslovakia, East Germany, Egypt, Iraq, Mongolia, Morocco, North Korea, North Yemen, Romania, Syria and Yugoslavia.