The USSR made use of medium- and heavy-calibre machine guns on its lighter tactical warplanes and, to a considerably greater extent, on a number of its battlefield helicopters. The medium-calibre weapons were limited to two types, namely the 0.3 in (7.62 mm) PK standard surface-to-surface weapon that was pintle-mounted in some older helicopters such as the Mil Mi-2 ‘Hoplite’, and a four-barrel rotary weapon of the ‘Gatling’ type that was carried on the starboard side of the nose of the Kamov Ka-29 ‘Helix-B’ maritime helicopter. Among the large-calibre heavy machine guns, the oldest weapon used in this period was the Universal Beresin, a type pioneered in 1940 as a standard 0.5 in (12.7 mm) weapon for aerial use. The UB was produced in a number of forms, but a typical weapon weighed 47.4 lb (21.5 kg), fired at a rate of 1,000 rounds per minute, and possessed a muzzle velocity of 2,822 ft (860 m) per second with a round firing a projectile weighing 1.69 oz (48 g). The weapon was conventional by the standards of its day, and fired belted ammunition in both its unsynchronized UBK fixed installation as on the Mikoyan-Guryevich MiG-15UTI ‘Midget’ conversion and armament trainer, and UBT flexible fire-suppression and anti-helicopter installation as on various battlefield helicopters from the Mil design bureau.

Another single-barrel heavy machine gun found in Mil helicopters for the fire-suppression role was the Afanayesev, also of 0.5 in (12.7 mm) caliber. In the early 1970s the USSR introduced a more advanced 0.5 in (12.7 mm) weapon as the MMPP YakB-12.7, a four-barrel weapon working on the same ‘Gatling’ principle as a number of American weapons developed by General Electric. This weapon was installed in the USPU-24 power-operated chin turret of the Mi-24 ‘Hind’ helicopter, and was assumed to fire standard 0.5 in (12.7 mm) ammunition at a selectable rate up to 4,600 rounds per minute. It is probable that an advanced fire-control system was used to provide effective medium-range capability with armour-piercing ammunition against battlefield targets such as helicopters and anti-aircraft vehicles. The USPU-24 turret was 2 ft 0.8 in (0.63 m) in diameter and 1 ft 1.66 in (0.55 m) in depth, was power operated, and could be traversed through 120º (60° left and right of the centreline) in azimuth while the machine gun could be elevated through an arc of 80º between -60° and +20°. The same machine gun was also used in a podded installation carried by the Mi-24 and possibly other battlefield helicopters, and these helicopters could also use a 0.3 in (7.62 mm) medium machine gun of the same four-barrel ‘Gatling’ configuration (see above). 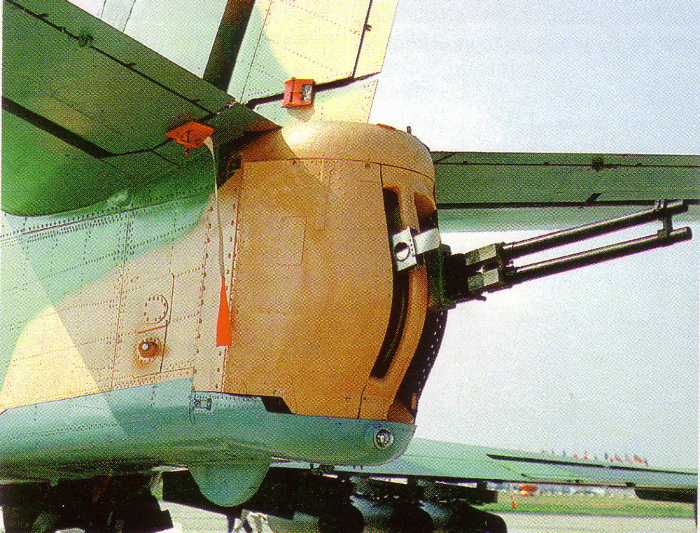 Cannon primacy
The USSR had long been a firm believer in the tactical efficacy of the aerial cannon, in both the air-to-air and air-to-surface roles, and continued to use older weapons as well as developing more advanced cannon. The Soviet philosophy was generally to produce weapons of slightly larger calibre than their Western counterparts, with emphasis on great strength so that a massive projectile could be fired at high muzzle velocity: the rate of fire inevitably suffered as a consequence, but the net result was superior destructive power (in terms of explosive content and kinetic energy) delivered with a flatter trajectory that considerably eased aiming problems.

An extremely powerful aerial weapon was the Nemenov-Suranov-Rikhter-Gribkov N-37, a gas-operated 37 mm cannon introduced in the mid-1940s and intended as the primary armament of the turbojet-powered fighters that the USSR was then introducing: although the type fired a very useful 25.93 oz (735 g) projectile at a muzzle velocity of 2,264 ft (690 m) per second, the 227.1 lb (103 kg) weight of the installation (excluding the greater mass of a tactically significant quantity of ammunition) was a problem for fighter designers, and the low rate of fire (400 rounds per minute) also had disadvantages except in the ground-attack role.

Definitive GSh-23
The most prolific of the more modern weapons used by Soviet warplanes was the medium-calibre Gryazev-Shipunov GSh-23, or GSh-23L with muzzle brakes. The weapon was created as a two-barrel weapon operating on the Gast principle with a mechanical linkage between the two breeches so that the firing of one barrel operated the breech mechanism of the other. The weapon was introduced in 1959, and was in every respect an excellent weapon, offering the combination of a useful 7.05 oz (200 g) projectile fired with a muzzle velocity of between 2,264 and 2,920 ft (690 and 890 m) per second depending on specific ammunition type at a rate of some 2,800 to 3,000 rounds per minute to an effective range of 3,280 yards (3000 m) at an installed weight of just 143.3 lb (65 kg).

The weapon was generally associated with the GP-9 pack for installation in tactical fighters such as later models of the MiG-21 ‘Fishbed’ and in the MiG-23 ‘Flogger’ with ammunition capacity of 200, 320 or 400 rounds. The same GSh-23L was also used in at least two different types of cannon pod developed by the MMPP organization. The UPK-23 was perfectly conventional, had a diameter of 1 ft 2.6 in (0.37 m), carried 260 rounds of ammunition, and was employed by many Soviet tactical warplanes and also by the Mi-24 battlefield helicopter. It is thought that the pod was about 9 ft 10 in (3.00 m) long and had a loaded weight of some 707.5 lb (320 kg). The SPPU-22 was less conventional as it was designed specifically for the ground-attack role under the wings of warplanes such as the MiG-27 ‘Flogger’ and Su-25 ‘Frogfoot’. Yet again, the pod carried 260 rounds of ammunition but the significant difference from the UPK-23 was the fact that the GSh-23L cannon was installed on a movable cradle in the lower part of the pod with its barrels in a scooped out fairing under the forward lower part of the pod. The weapon was normally operated with the barrels in this position, locked to fire directly forward with the warplane in level or diving flight, but could be unlocked and depressed through an angle of up to -30º for the engagement of ground targets with the warplane in level flight. The pod was controlled by a computer system built into its rear section: after warplane height and speed had been manually entered into the system, the pilots aimed at the target and opened fire, the computer system then keeping the gun on the target as the warplane approached and overflew it.

Most if not all of the following Soviet cannon emanated from the Gryazev-Shipunov design bureau. These five new weapons fell into two calibre brackets, namely 23 and 30 mm. In the 23 mm calibre there were only two weapons, the Gryazev-Shipunov GSh-23-6 and the 9A620 (sometimes called the 9A768), which were both six-barrel cannon operating on the ‘Gatling’ principle. The GSh-23-6 was carried by the MiG-31 ‘Foxhound’ in an installation with 260 rounds and by the Su-24 ‘Fencer’ in an installation with an unknown number of rounds. The roles of the two warplanes suggested that the primary task of the GSh-23-6 was the destruction of high-value air targets such as cruise missiles at short range, and also the engagement of ground targets.

30 mm calibre
In the 30 mm bracket there were three weapons. The Gryazev-Shipunov GSh-30-1 was the least complex of these, being a single-barrel cannon carried by two late-generation Soviet fighters, the MiG-29 ‘Fulcrum’ and Su-27 ‘Flanker’ in installations with 150 and 149 rounds respectively. The cannon was used in conjunction with the fighters’ advanced fire-control systems (including a laser rangefinder), and was a notably accurate weapon capable of firing at 1,800 rounds per minute but generally delivering its heavy projectiles at the rate of 1,500 rounds per minute.

Next up in terms of complexity was the Gryazev-Shipunov GSh-30-2 or AO-17A, which was a two-barrel weapon probably working on the Gast principle and carried only by the Su-25 ‘Frogfoot’. The weapon was clearly designed for the ground-attack role, and the standard installation included provision for 250 rounds of ammunition. The GSh-30-2’s rate of fire was 3,000 rounds per minute, and the Su-25’s ammunition capacity was generally thought to be enough for a one-second burst in each of five separate attacks.

The most complex of the new 30 mm weapons was the Gryazev-Shipunov GSh-30-6, a six-barrel cannon operating on the ‘Gatling’ principle and carried in later variants of the MiG-27 ‘Flogger’ ground-attack warplane. This was another weapon optimised for the delivery of large numbers of projectiles (including armour-piercing types) in the air-to-surface role, and was used with an advanced fire-control system that includes a laser ranger for accurate determination of target range and the rate at which the range changed as the warplane closed. The detail of this weapon included a standard ammunition supply of 300 rounds, and a recoil force of 11,243 lb (5100 kg).

The last Soviet cannon to enter aerial service before the dissolution of the USSR was the Tula Modified 2A42, which was a 30 mm weapon carried by the Kamov Ka-50 Werewolf ‘Hokum’ and Mil Mi-28 ‘Havoc’ battlefield helicopters. The cannon was a derivative of the weapon carried by light armoured vehicles such as the BMP-2, and had two rates of fire: 900 and 300 rounds per minute for the engagement of air and ground targets respectively. As the weapon possessed a dual-feed arrangement in its original ground-based application, it was not unreasonable to suppose that the helicopter installation may carry magazines for AP-T and HE-T rounds, each giving its projectile a muzzle velocity of about 3,281 ft (1000 m) per second and thus providing an effective capability against light armoured fighting vehicles as well as soft-skinned vehicles and other helicopters.

The Ka-50’s installation was of the semi-fixed type on the starboard side of the fuselage: the gun was fixed in azimuth (and kept on the target’s bearing by an automatic tracker that slewed the whole helicopter on its rotor axis) but could be elevated by a hydraulic system. Some 500 rounds of ammunition were supplied from two fuselage tanks. The Mi-28’s installation (with 300 rounds of ammunition) was of the underfuselage type similar in concept to that of the Boeing (McDonnell Douglas) AH-64 Apache: the turret could be traversed through 220° (110º left and right of the centreline), while the cannon could be elevated through an arc of 53º between -40° and +13°.