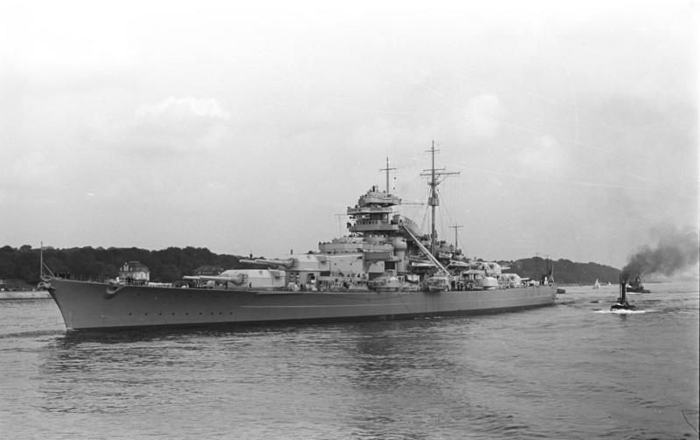 In May 1941 the German battleship Bismarck and the heavy cruiser Prinz Eugen had only recently been completed, and Grossadmiral Erich Raeder, commander-in-chief of the German navy, believed that a commerce-raiding cruise into the Atlantic would be the best way for the two vessels to cut their operational teeth. The British were aware that the two ships had been completed, and that they might sortie with the pocket battleship Lützow and light cruisers Emden and Köln, so giving the German navy an exceptionally powerful Atlantic raiding squadron. The British therefore put substantial forces on full alert, and intensified both air and sea patrol operations between Iceland and Norway, the area through which any German squadron would have to sail to reach the Denmark Strait between Greenland and Iceland, or the Færoes/Iceland gap to break out into the North Atlantic and its convoy routes.

In fact only Bismarck and Prinz Eugen were earmarked for the sortie ordered by Raeder on 2 April 1941. The original plan was for the battle-cruisers Scharnhorst and Gneisenau to sortie from Brest at the same time on a diversionary raid, but both of these ships had been damaged and were thus not available to participate even though the raid had to be postponed after Prinz Eugen had suffered mine damage in the Baltic on 23 April. Admiral Günther Lütjens, the Flottenchef and the officer commanding ‘Rheinübung’, suggested that Atlantic sortie should be postponed until Scharnhorst and Gneisenau had been repaired or, indeed, until the new battleship Tirpitz had been commissioned, but this would have led to unacceptable delays and the operation was ordered to proceed with Bismarck and Prinz Eugen alone. And unlike the orders given to Scharnhorst and Gneisenau, now lying at Brest after a similar operation in the Atlantic, Lütjens was given permission for Kapitän Ernst Lindemann’s Bismarck to attack convoys with battleship escort if this would allow Kapitän Helmuth Brinkmann’s Prinz Eugen to get in among the merchant shipping. However, Lütjens was under strict instructions not to jeopardise his squadron in any way against superior naval forces or if there was no worthwhile convoy in the offing.

Departure from the Baltic
The two German ships sailed from Gdynia on the Baltic coast of German-occupied Poland during 18 May, and two days later emerged from the Kattegat into the North Sea. By 21 May the British were aware of the two ships’ movement, Swedish intelligence having warned the British, who were further alerted on 20 May when a Norwegian told the British naval attaché in Stockholm on 20 May that he had been informed at a cocktail party that two major Germans warships had been seen moving north through the Kattegat. Admiral Sir John Tovey was informed that his Home Fleet would be reinforced by the fleet carrier Victorious and battle-cruiser Repulse. By 22 May the British had aerial photographs of the two German ships lying in the Korsfjord south of Bergen. There were suggestions that the German ships might be covering an assault on Iceland, but Tovey remained convinced that the Germans were about to launch another major offensive by surface ships into the North Atlantic.

Thus Tovey strengthened British patrols between the Orkney islands and Greenland (via the Shetlands, the Færoes and Iceland, among which the Færoes/Iceland gap was being patrolled by the light cruisers Arethusa, Birmingham and Manchester and five trawlers with the support of flying boats of RAF Coastal Command), and sent Vice Admiral L. E. Holland’s Battle-Cruiser Squadron (the elderly battle-cruiser Hood, new battleship Prince of Wales, and destroyers Achates, Antelope, Anthony, Echo, Electra and Icarus) to Hvalfjördur in south-west Iceland as cover for the Denmark Strait. Further aerial reconnaissance on 22 May showed that Bismarck and Prinz Eugen had sailed from the Korsfjord, and Tovey departed Scapa Flow at 22.45 with the new battleship King George V, fleet carrier Victorious, light cruisers Aurora, Galatea and Kenya and anti-aircraft cruiser Hermione of Rear Admiral A. T. B. Curteis’s 2nd Cruiser Squadron, and destroyers Active, Inglefield, Intrepid, Lance (forced to turn back with damage), Nestor and Punjabi, this force being joined later by the elderly battle-cruiser Repulse from the Clyde and three destroyers from Admiral Sir Percy Noble’s Western Approaches Command.

Against the advice of his officers, Lütjens had decided to break through the ice-narrowed 60-mile (95-km) Denmark Strait rather than 300-mile (485-km) gap between the Færoe islands and Iceland, which would have given him quicker access to the Atlantic against a mere three cruisers before the Battle-Cruiser Squadron and the Home Fleet could close on him. As it was, the German squadron was picked up on the radar of the cruiser Suffolk at 19.22 on 23 May, and thereafter the Germans were shadowed by the heavy cruisers Suffolk and Norfolk of Rear Admiral W. F. Wake-Walker’s 1st Cruiser Squadron, whose radio reports started the two British main forces closing in on the anticipated position of the German squadron. 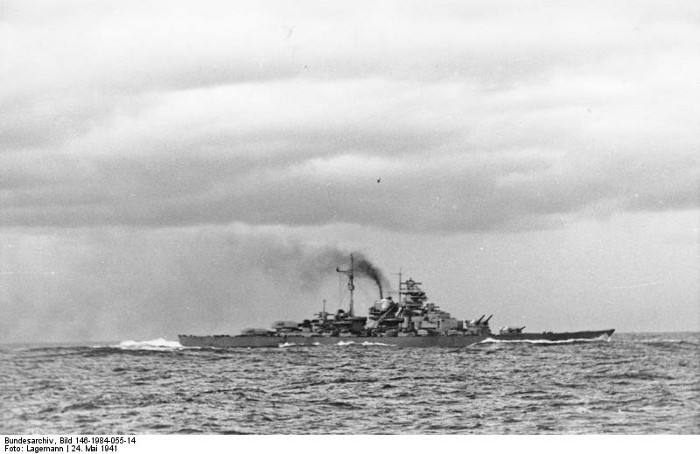 Loss of Hood
At 05.35 on 24 May Hood and Prince of Wales sighted the German ships and immediately altered course to close the range, possibly so that Bismarck would be unable to use long-range plunging fire to strike a mortal blow through the thin horizontal armour of the obsolescent Hood. At 05.52 Holland ordered his two ships to open fire on the leading German ship, which was now Prinz Eugen as the two had exchanged places during the night. However, Prince of Wales correctly identified Bismarck and fired on her. The crisis came at 06.00 just as Holland ordered a turn to port to bring the after guns of his ship to bear. A 380-mm (15-in) salvo from Bismarck struck Hood, which blew up and disappeared in three or four minutes, leaving just three survivors out of a complement of 95 officers and 1,324 men. The Germans then turned their attentions to Prince of Wales, which was suffering technical problems with her 14-in (356-mm) main guns, and soon landed four 380-mm (15-in) and three 203-mm (8-in) shells on the British battleship, one hit landing on the compass platform and killing or wounding everyone on it but the ship’s captain and a signaller. Captain J. C. Leach broke off the action at 06.13 as he was heavily outgunned. But Prince of Wales had nevertheless managed to hit Bismarck twice, one of the 14-in (356-mm) shells gashing open an oil bunker and so hampering the German flagship through loss of fuel, which also left a telltale slick in the sea, and also causing contamination of the surviving fuel with sea water.

Lütjens therefore decided to abandon ‘Rheinübung’, and at 08.01 radioed his intention of making for St Nazaire on the western coast of German-occupied France. Meanwhile the British were reassessing their position after Hood’s loss. While Wake-Walker took Prince of Wales and the Battle-Cruiser Squadron’s destroyers under command and continued to shadow the German ships, the Admiralty set about increasing the strength of the forces opposing Bismarck and Prinz Eugen by calling from Gibraltar Vice Admiral Sir James Somerville’s Force ‘H’ (the elderly battle-cruiser Renown, fleet carrier Ark Royal, light cruiser Sheffield, and destroyers Faulknor, Foresight, Forester, Foxhound, Fury and Hesperus) plus the battleship Rodney and destroyers Mashona, Somali and Tartar, which were escorting the troopship Britannic from the Clyde to New York; the destroyer Eskimo remained with Britannic.

Desperate British expedients
Tovey by now appreciated that Lütjens might make for a French port or return to Germany rather than continue with the original raiding scheme, and disposed his forces accordingly. The speed of the German squadron was still too great for Tovey’s liking, however, and during the night of 24/25 May a strike by Fairey Swordfish torpedo-bombers of the untried Victorious was launched. Lieutenant Commander E. Esmonde led his aircraft with great skill, and managed to score one torpedo hit on Bismarck: the weapon failed to detonate, but all the aircraft managed to return to their carrier. Matters now took a more ominous turn for the British, for Lütjens ordered Prinz Eugen to break off on an independent raiding mission, and then Suffolk lost radar contact with the German battleship at 03.06 as Bismarck turned south-east toward the French coast. Moreover, the British ships were running short of fuel and having to break away for replenishment (leaving in the Atlantic only King George V of the 22 ships that had sailed on 22 May), and a radio message from Bismarck was incorrectly triangulated, leading Tovey to believe that the German battleship was trying to return to Germany, so persuading him to turn north-west at 10.47 on 25 May.

The crucial moment came at about 10.30 on 26 May, when a Consolidated Catalina flying boat of the RAF’s Coastal Command spotted Bismarck steaming south-east toward Brest, now only 690 miles (1110 km) distant. A signal was flashed out, and it was immediately apparent that the Home Fleet could not intercept in the immediate future. Success for the British now rested with Force ‘H’, which at 14.50 launched a strike by Swordfish torpedo-bombers from Ark Royal, the pilots fully appreciating that they must slow Bismarck for Rodney and King George V to intercept before they too had to break off for fuel. The attack was a disaster, for the pilots struck at Sheffield, which had been sent ahead by Somerville to shadow Bismarck. Luckily for the British, the torpedoes failed to work, exploding as soon as they hit the water. A second attack was launched from the carrier at 19.10, the torpedoes being fitted with contact rather than magnetic proximity detonators: a U-boat watched the take-off but could not interfere as it was out of torpedoes. Greater success attended the second attack, for between 20.47 and 21.25 on 26 May the Swordfish torpedo bombers scored two hits, the first hitting the armour belt and causing no damage but the second striking the stern to damage the propellers and jam the rudders.

Bismarck’s death
The fate of Bismarck was now sealed, for the great ship was seriously slowed and could not steer. Bismarck circled twice and then settled on a north-north-westerly course toward the two British battleships. First Bismarck ran into the destroyers Cossack, Maori, Sikh, Zulu and Polish Piorun of Captain P. L. Vian’s 4th Destroyer Flotilla, but so accurate was the battleship’s gunfire that of the 16 torpedoes launched by the destroyers in a very heavy sea, only two struck the battleship, causing no significant damage. Meanwhile Norfolk was vectoring in King George V and Rodney, and at 08.47 on 27 June the two British battleships opened fire at 25,000 yards (22860 m), soon closing to 16,000 yards (14630 m). At 10.15 Tovey had to break off for fuel, but by this time Bismarck was a blazing wreck without effective armament.

At 10.36 Bismarck sank: according to the British, she was finished off by two torpedoes from the cruiser Dorsetshire, but according to the Germans she was scuttled by her crew. A mere 110 survivors were plucked out of the water by Dorsetshire and the destroyer Maori, but after an hour, rescue work was abruptly ended when there were reports of a U-boat in the area. Another five survivors were picked up by U-74, and the German weather ship Sachsenwald. Some 2,190 other men had been killed or otherwise went down with their ship.

Prinz Eugen, meanwhile, had refuelled at sea on 24 May, but then started to develop engine problems on 26 May and so turned back toward France, reaching Brest unhindered on 1 June. So ended ‘Rheinübung’, which had been a disaster for the Germans but also a great blow to the British. Apart from the loss of Hood and damage to Prince of Wales, the operation to sink Bismarck revealed the severe tactical limitations imposed on Atlantic operations in the absence of underway replenishment tankers, and also how dangerous the German fleet would have been had its Plan ‘Z’ construction programme been completed before the outbreak of war: the chase of one battleship and one heavy cruiser had required the British to use eight capital ships (two aircraft carriers and six battleships/battle-cruisers), 11 cruisers, 22 destroyers and six submarines with great dislocation of convoy escort and the like.