The British Aerospace Sea Dart naval surface-to-air missile was a highly capable third-generation naval SAM, and was conceived and brought to fruition by the Hawker Siddeley Dynamics team which had earlier been responsible for the Seaslug naval surface-to-air missile. Its intended role was the area defence of major battle groups for all-aspect low/high-altitude air attack by high-performance aircraft and most types of missile, but also possessed a capability for surface-to-surface use out to the radar horizon (the farthest that the ship’s radars can illuminate a target), the climb and dive attack used in this role adding considerably to the missile’s terminal kinetic energy to ensure penetration of even an armoured deck, with warhead detonation following inside the target for maximum destructive effect. In 1987 a new fragmentation warhead for the Sea Dart was approved for production.

Initial planning
Preliminary thoughts about Sea Dart began in the late 1950s, an Admiralty contract for the weapon being placed in 1962 and the first test launch following in 1965. The development programme was generally successful, and production was authorised at the end of 1967 to allow service entry in 1973. The design team opted to use semi-active radar guidance, with proportional navigation, to ensure that at even the longest ranges the missile hit or passed within lethal distance of the target. The range desired for the weapon could have been provided by solid-propellant propulsion, but instead the design team chose the Bristol Siddeley (later Rolls-Royce) Odin ramjet. This provided all the range required, besides offering great flexibility in the velocity/range equation and sustained propulsion throughout the flight for maximum manoeuvrability in conjunction with the powerful control surfaces, which took the form of a cruciform of hydraulically actuated fins at the tail of the missile. The Sea Dart thus emerged as a thick-walled cylinder built round the central duct for the ramjet sustainer, with low-aspect-ratio cruciform wings indexed in line with the fins, and a small but powerful solid-propellant booster at the base of the missile. The electronics were located in the forward section of the cylindrical wall with the guidance portion in front of the control portion; fuel tankage occupied the section of the wall inside the forward three-quarters of the wings. The booster had four rectangular fins that sprang fully open as the missile left the launcher, and accelerated the missile to Mach 2 in a mere 2.5 seconds, dropping away only after the ramjet had fully ignited and was initially exhausting through circumferential inter-stage vents. Located at 90° from each other on the inlet wall at the front of the missile were four dielectric ‘polyrod’ antennae for the Marconi guidance system, which used interferometry principles for extreme accuracy of interception. 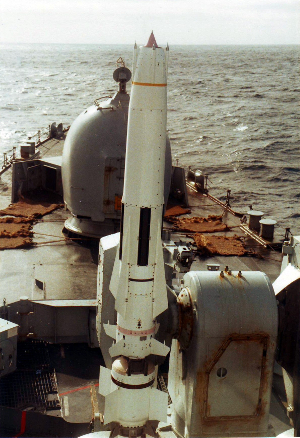 The basic Sea Dart system was the Sea Dart Guided Weapon System Mk 30, most generally associated with the Royal Navy’s ‘Type 42’ class destroyers and ‘Invincible’ class light aircraft carriers. The Sea Dart was fired from a twin-arm launcher designed and built by Vickers Shipbuilding (later VSEL). This launcher was electrically powered, capable of 360° traverse and able to elevate the missiles to the vertical position. Beneath the launcher was a fully automatic loading system and associated 22-round magazine, in which the missiles were stored vertically for movement first to an intermediate area and then to the launcher. The GWS Mk 30 fire-control system was highly capable, and used preliminary target detection and location data provided by the launch ship’s 3D long-range air-surveillance radar (generally the Royal Navy’s Type 965, a Marconi equipment with twin AKE-2 antennae and on-mounted Cossor IFF Mk 10). The GWS Mk 30 immediately illuminated the target with energy from either of the associated Royal Navy Type 909 target-tracking and missile-guidance radars, which were monopulse G/H-band equipments produced by Marconi.

The system automatically aligned the launcher in two dimensions and, when the target was within range, launched a missile. The FRAG-HE warhead was fitted with a proximity fuse, and was capable of dealing with all aerial targets and also of severely damaging most surface combatants. As most ships carrying the Sea Dart system had two Type 909 radars, these ships could engage two targets simultaneously, with further engagement possible as soon as the radars were free to designate fresh targets for the automatically (and rapidly) reloaded launcher.

The Sea Dart proved successful in the Falklands war of 1982, being credited with the destruction of seven Argentine aircraft, but a number of small limitations were also discovered in the missile, the GWS Mk 30 and Type 909 radar. These were generally remedied, and BAe also produced an upgraded Sea Dart Mk 2 missile. This had features for improved electronic counter-countermeasures, and also incorporates a revised airborne navigation package using advanced solid-state logic components and large-scale integrated circuits. This reduced the mass of the guidance package by a useful degree, yet still enabled the missile to take full advantage of the energy-saving trajectory shaping. This is made possible by the use of a booster with thrust-vector control for immense manoeuvrability right from the moment the missile left the launcher. The weight and volume saved in the missile proper were used for the additional liquid fuel (believed to be kerosene) which increased range without degrading the system performance.

BAe also developed but failed to secure orders for a Lightweight Sea Dart version suitable for smaller warships with a displacement as low as 300 tons. This version was announced in 1978 and, instead of the twin launcher and associated magazine of the GWS Mk 30, comprised a number of weatherproof containers for standard Sea Dart missiles, a 1412AL digital computer and associated control panels for the single operator, and a Marconi ST805 SD tracking and illuminating radar. The last was one of five variants of the ST805 radar, using features of the Marconi 800 series and the Type 909. The fire-control system was designed to interface with the launch vessel’s control system as a means of steering the vessel to bring the desired missile onto the correct launch bearing. The Lightweight Sea Dart container was installationally identical with that of the Sea Eagle SL anti-ship missile, opening the possibility of fast attack craft fitted with anti-ship missiles, SAMs or a mix of the two types. A typical fast attack craft could thus accommodate eight Lightweight Sea Dart containers (four on each beam) to offer a powerful SAM defence.

Unrealised plans
It is worth noting also that BAe proposed a land-based area defence model of the Sea Dart system in the late 1970s and early 1980s. The UK was woefully deficient in this field, having only the elderly Bloodhound for long-range air-defence, and the Guardian surface-to-air missile system would have provided a modern and thoroughly capable successor. The British government showed only passing interest in the project, which then fell into abeyance. The core of Guardian was the standard Sea Dart missile, supplied in a sealed container, essentially similar to that of the Lightweight Sea Dart system, for treatment as a round of ammunition. The BAe proposal envisaged a wholly mobile arrangement with a battery controlling a varying number of firing troops each with a maximum of four two-missile launchers. The battery headquarters would have comprised a battery command post, a Plessey 41GF75 Panther surveillance radar (a land-optimised version of the naval AWS-5 E/F-band equipment), a generator, a repair vehicle and various items of communication equipment. Here targets would have been detected, identified, tracked and prioritised before being passed to the various firing troops for engagement. The firing troop would have comprised a number of cable-linked vehicles in the form of a troop headquarters, generators, a Guardian tracking and illuminating radar, missile setting equipment to provide fire-control data to each missile, up to four launchers, and two missile resupply vehicles. Each missile launcher would have been be a mobile unit whose wheels would have been demounted for operations, with the platform levelled by three jacks before the launcher was elevated manually to 30° and power-trained through 360° under the direction of the troop fire-control system. The whole system was planned round a 30-minute deployment onto an unprepared site.

In February 1991, during the 1st Gulf War, the US battleship Missouri, escorted by the British destroyer Gloucester (carrying Sea Dart) and US destroyer Jarrett (equipped with Phalanx close-in weapon system), was engaged by an Iraqi Silkworm (NATO reporting name ‘Seersucker’) surface-to-surface missile. The Silkworm missile was intercepted and destroyed by a Sea Dart fired from Gloucester. During the same engagement, Jarrett’s 20-mm Phalanx CIWS was placed in auto-engagement mode and targeted chaff launched by Missouri rather than the incoming missile.

Upgrades to the Sea Dart
As noted above, the Sea Dart was upgraded over the years, most especially in its electronic features, as newer technology became available. The modification standards which were fielded were the Mod 0 Sea Dart basic 1960s version as used in the Falklands war, with vacuum-tube technology and a range if about 46 miles (74 km); the Mod 1 Improved Sea Dart upgraded version of 1983/86 with updated guidance systems possibly allowing some capability against sea-skimming targets and much greater reliability; the Mod 2 Improved Sea Dart of 1989/91 including ADIMP (Air Defence IMProvement) which saw the replacement of six old circuit cards in the guidance system with one, allowing the spare volume to be used for an autopilot and, used alongside a command data-link (sited on the Type 909 pedestal) allowing several missiles to be ‘in the air’ at once, retargeted during flight etc and allowing an initial ballistic trajectory doubling range to 92 miles (150 km) with the upgraded Type 909(I) radar for terminal illumination only; the Mod 3 Improved Sea Dart final version with new infra-red fuse but delayed eight years from 1994 to 2002; and the GWS 31 Sea Dart Mk 2 (also known as the Sea Dart II but not to be confused with the Mod 2) whose development was cancelled in 1981. This had been intended to allow ‘off the rail’ manoeuvres with additional controls added to the booster: the Mk 2 was reduced to Advanced Sea Dart, then Enhanced Sea Dart and finally Improved Sea Dart.

The ‘Type 42’ destroyers equipped with the Sea Dart are reaching the end of their service lives, with some vessels already retired. The ships are being replaced by the larger ‘Type 45’ destroyer armed with the Sea Viper missile system. On 13 April 2012 Edinburgh fired the last ever operational Sea Dart missiles after a 30-year career, and the last two remaining ‘Type 42’ destroyers, York and Edinburgh, will complete their lives without the Sea Dart system operational. Sea Dart production totalled more than 2,000 missiles, and from 1999 support for the weapon passed to MBDA (UK) Ltd.

The Argentine navy bought 60 Sea Dart missiles for its two ‘Type 42’ destroyers, but retired them in 1987 for lack of spares.