It was in May 1935 that the US Army Air Corps announced its requirement for a new fighter of the ‘modern’ type with a basically all-metal structure, cantilever wing and an enclosed cockpit. Alexander Kartveli, chief designer of the Seversky Aircraft Corporation, and Major Alexander P. de Seversky decided to offer the SEV-2XP monoplane as the organisation’s response despite the fact that it had been designed as a private-venture fighter of the two-seat type and the requirement demanded single-seat accommodation: even so, de Seversky believed that the company’s two-seater would be capable of outperforming any single-seat fighter likely to be entered in the USAAC’s competition. The SEV-2XP had been designed and built with great speed on the basis of the SEV-3 three-seat civil monoplane, and first flew in the spring of 1935. Success in the competition was important to most aspiring US aircraft manufacturers as this important prototype competition that was universally thought to offer the probability of large-scale production contracts for the winner, and established the basic design concept (a very substantial fuselage and a semi-elliptical wing) which Kartveli was to pursue for most of his piston-engined fighters for Seversky and its successor, the Republic Aircraft Corporation. 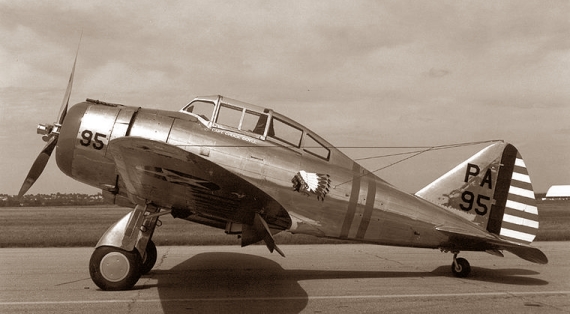 The SEV-2XP was a two-seat type with fixed tailwheel landing gear that included wide-track main units which were nicely faired and carried spatted wheels, but was damaged in a forced landing in June 1935 as it was being ferried to Wright Field in Ohio for the official fighter trials. As it was being repaired, the SEV-2XP was revised as the single-seat SEV-1XP with semi-retractable main landing gear units, and in this form was an aeroplane of basically all-metal construction with fabric-covered control surfaces. The core of the structure was the oval-section fuselage, which was of semi-monocoque construction and considerable depth. This carried the cantilever tail unit and the low-set wing, which was tapered in thickness and chord with a straight leading edge and curved trailing edge: the centre section had slight dihedral and carried slightly more dihedralled outer panels, and the trailing edges were occupied by the standard combination of outboard ailerons and inboard flaps. The airframe was completed by the tailwheel landing gear, which included main units and a tailwheel that retracted rearward into large underwing fairings and the underside of the rear fuselage respectively, and the heavily framed cockpit enclosure offering good all-round fields of vision and fitted with a rearward-sliding section for access. The powerplant was based on one Wright R-1820-G5 Cyclone air-cooled nine-cylinder radial engine rated at 850 hp (634 kW), installed in a long-chord cowling, and driving a three-blade metal propeller of the constant-speed type. 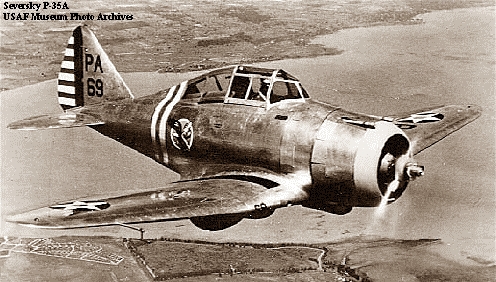 During the official trials which followed a new first flight on 15 August 1935, the SEV-1XP reached a maximum speed of only 251 kt (289 mph; 465 km/h) rather than the stipulated 261 kt (300 mph; 483 km/h) at 10,000 ft (3050 m), and in the belief that this was the result of problems with the Cyclone engine, Seversky hastily replaced the Wright unit with a Pratt & Whitney R-1830-9 Twin Wasp air-cooled 14-cylinder two-row radial engine, which was more compact than the Wright single-row engine and therefore offered lower drag and improve fields of vision for the pilot, and also took the opportunity to revise the shape of the vertical tail surface. The rating of the R-1830-9 engine was notionally identical to that of the R-1820-G5, but was found in fact to deliver only 783 hp (584 kW) and as a result the revised SEV-1XP attained a maximum speed of only 240.5 kt (277 mph; 446 km/h) until the aeroplane was further revised with a fully rated version of this engine and allocated the revised company designation SEV-7.

The USAAC saw some merit in the design, however, and as the competition had failed to produce the advanced type it was seeking, the service ordered 77 examples of the fighter after it had been further revised as the AP-1 (Army Pursuit no. 1). This adoption of an interim type bought time for the USAAC to demand a considerable better fighter from the American aircraft industry. Deliveries of the AP-1 were made in the period between July 1937 and August 1938, and the type entered service as the P-35 with the powerplant of one R-1830-9 engine rated at 950 hp (708 kW) at optimum altitude.

The P-35 was the USAAC’s first single-seat fighter of all-metal construction with retractable main landing gear units and an enclosed cockpit. After the delivery of more capable fighters in the late 1930s and early 1940s, the surviving P-35 fighters were transferred during 1941 to second-line duty as fighter trainers.

The EP-1 was the Export Pursuit no. 1 derivative of the AP-1 with a rear fuselage longer than that used in the original model, and resulted from Swedish interest that was translated into a June 1939 order for 15 aircraft and later supplemented by orders of October 1939 and January 1940 for additional 45 and 60 aircraft respectively with the intention of giving the Swedish air force a total of 120 such fighters.

The first 15 aircraft had been delivered by January 1940 via the Norwegian port of Narvik for service with the local designation J 9, and the second batch of 45 aircraft followed by July 1940 via Finland’s Arctic port of Petsamo for service up to 1944.

In October 1940 the US government requisitioned the last batch, and these 60 aircraft had been delivered by February 1941 for service with the US Army Air Corps under the designation P-35A and with the powerplant of one R-1830-45 engine. Late in 1941 some 48 of the fighters were rushed across the Pacific Ocean to bolster the US air strength in the Philippines. The aircraft lacked tactical necessities such as self-sealing fuel tanks and pilot protection, however, and two days after the start of the Japanese offensive in December 1941 only eight of the 48 aircraft were still operational, these succumbing in the following days.

The 12 aircraft left in the USA received the revised designation RP-35A in 1942, and were later handed over to the Ecuadorian air force, with which they remained operational into the later 1940s.