By the mid-1950s, it was clear that the days of the ZSU-57-2 self-propelled anti-aircraft gun mounting were numbered in terms of the system’s operational capability. For all the destructive effect of its large projectiles, the S-68 cannon possessed too low a rate of fire; the poor rates of traverse and elevation made it all but impossible to engage a high-performance manoeuvring target; and the fire-control system limited realistic operational capability to clear-weather daylight operations. 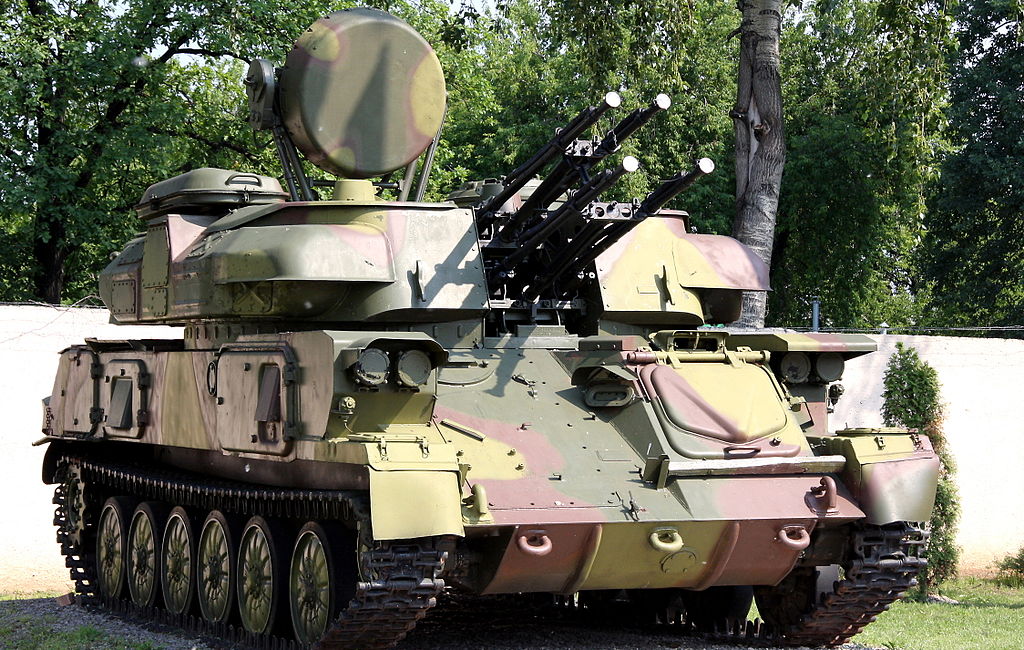 Yet the primary threat faced by the Soviet army was a campaign in Europe against opponents who fielded high-technology weapons including all-weather attack aircraft. What was needed in this tactical scenario was a new air-defence system offering the same levels of battlefield mobility and protection as the ZSU-57-2, but optimised for the short-range protection of Soviet first-line combat formations in all weather conditions by day and night. This called for a tracked chassis carrying a lightweight turret fitted with a multiple battery of fast-firing cannon. The combination of lighter weapons and powerful motors would provide the rapid traverse and elevation rates required for the sustained engagement of high-speed manoeuvring targets, especially when supported by a radar-directed fire-control system for adequate target detection and fast processing of a fire-control solution.

The resulting ZSU-23-4 self-propelled 23-mm quadruple cannon mounting was designed between 1957 and 1962, and was built by the Mytishchy Engineering Works (about 6,500 mountings between 1964 and 1982) for a service debut in 1965 with the Soviet army name Shilka. The replacement of the ZSU-57-2 by the ZSU-23-4 in first-line formations proceeded rapidly, all ZSU-57-2 mountings having been phased out of first-line formations by the early part of the 1970s, and the new equipment soon began to acquire a very considerable reputation when it entered combat in Vietnam and the Middle East. In the latter arena, during the 1973 ‘Yom Kippur War’, many Israeli aircraft succumbed to the Shilka while operating at low levels in an effort to avoid the Soviet-supplied surface-to-air missile such as the 2K12 Kub (NATO designation SA-6 ‘Gainful’) fielded by Egypt and Syria for high- and medium-altitude defence.

Good commonality with other AFVs

The ZSU-23-4 is based on the GM-575 tracked chassis, which uses components of the PT-76 light amphibious tank, and the hull is all but identical with that used for the 2K12 SAM system. The vehicle is divided into three compartments, with the driver’s position at the front left, the fighting compartment in the centre and the power plant at the rear. The core of the fighting compartment is the large rectangular turret, which has an admirably low silhouette. Here are located the other three crew members: the commander on the left under a 360° traverse cupola fitted with three periscopes, with the radar operator/gunner and range operator to his right. These three are separated from the armament section of the turret by a gas-tight bulkhead.

The radar used in the ZSU-23-4 is the RPK-2 Tobol (otherwise 1RL33) known to NATO as the ‘Gun Dish’, which has its downward-folding antenna above the rear of the turret. This J-band radar can detect possible targets at a range of 20000 m (21,875 yards) and track them at 8000 m (8,750 yards). The rest of the fire-control system comprises an optical sight for use when the enemy is using ECM, and a fire-control computer. In typical conditions the ZSU-23-4’s reaction time from target detection to the opening of fire is between 20 and 30 seconds, and estimates indicate that it is 50% more accurate and 66% longer-ranged than the US M163 Vulcan system, which fires smaller projectiles at a somewhat higher rate. The ZSU-23-4 can engage targets while stationary or on the move, with a maximum speed of 25 km/h (15.5 mph) and tilt of 10°, though fire while the vehicle is moving is some 50% less accurate than fire when stationary. The turret can be traversed through 360°, and the cannon can be elevated from -4° to + 85°, high traverse and elevation rates allowing the ZSU-23-4 to engage fast-moving and fast-crossing targets even at short ranges. 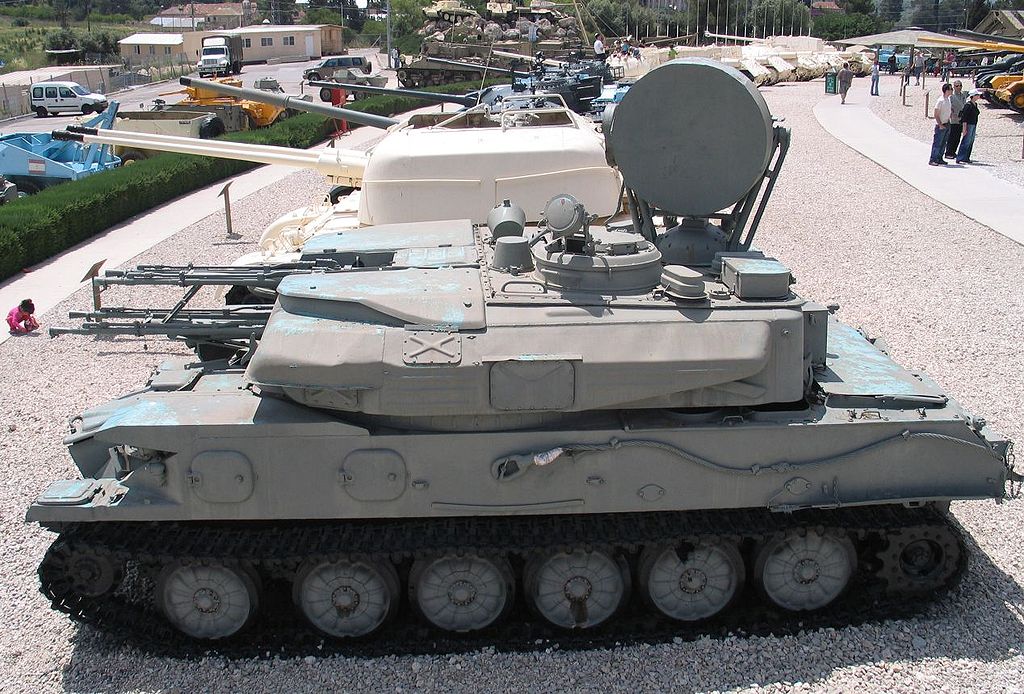 In typical circumstances, the radar is used for 360° surveillance or sector scan over a limited arc. As soon as an echo is identified as a target by the IFF system, the radar is switched into automatic tracking mode, and starts to feed target data (bearing, elevation and range) into the fire-control computer for the solution of the fire-control problem. As soon as the target is within range, the commander and radar operator/gunner are automatically informed, and the target is engaged. A typical reaction time, from target acquisition to firing, is between 20 and 30 seconds. Naturally enough, the greatest system accuracy follows from the use of all capabilities, but the ZSU-23-4 can also be used in optical mode without the computer and without the stabilisation system, though in either of these modes accuracy is seriously degraded. Standard equipment includes an NBC system and night-vision devices.

There are at least nine variants of the basic ZSU-23-4, most of them featuring alterations to the cooling and stowage facilities, the latter adding a pannier for two ammunition boxes to each side of the turret. The most important of these variants are the pre-production and initial production ZSU-23-4 of 1965, the full-production ZSU-23-4V of 1968 with enhanced reliability and ZSU-23-4V1 of 1972 with improved radar and an improved engine, and the definitive ZSU-23-4M Beryoza of 1973. This last was produced in three subvariants as the basic ZSU-23-4M armed with modernised 2A7M cannon, the pneumatic loading arrangement replaced by a pyrotechnic loading arrangement, and the welded tubes of the cannon coolant outlet replaced by flexible pipes to increase the cannon barrel life from 3,500 to 4,500 rounds; the ZSU-23-4MZ (Zaproschik or inquirer) of 1977 equipped with the improved Luk IFF system (all ZSU-23-4M mountings were upgraded to the ZSU-23-4MZ standard during scheduled maintenance); and the ZSU-23-4M2 of 1978 as the so-called Afghan war variant for enhanced capability in mountain combat by the replacement of the radar system by a night sight, the ammunition capacity increased from 2,000 to 4,000 rounds. Other change in the ZSU-23-4M mountings included panniers for three rather than two ammunition boxes, an armoured cover for the cannon, an improved radar not slaved to the gun barrels to allow independent radar search, and a digital rather than analog fire-control system that could be linked electronically to off-set radars and fire-control systems. In 1985 there appeared a subvariant of the ZSU-23-4M with revised radar, identifiable by sidelobe clutter-reducing vanes in the centre of the antenna dome, and IFF protrusions on the sides of the antenna dome.

Further developments have been undertaken by former elements of the USSR, including former bloc countries. Russia and Belarus created the ZSU-23-4M4 and ZSU-23-4M5 modernised variants of 1999 with pairs of 9K38 Igla man-portable air-defence systems on each side of the turret and equipped with 81-mm (3.19-in) smoke grenade launchers, laser emission sensors, optronic vision devices including a TV system for driver, and an improved radar system. Other changes included the replacement of the mechanical transmission by hydrostatic transmission, and mobility increased to the level of main battle tanks.

The Donets of 1999 was a Ukrainian modernisation developed by the Malyshev Tank Factory in Kharkov. It has the modified turret of the ZSU-23-4M, additionally armed with two pairs of Strela-10 SAMs, and a doubled ammunition capacity, on the hull of the T-80UD main battle tank.

The ZSU-23-4MP Biała is a Polish upgrade of 2000 with PZR Grom SAMs and fully digital passive aiming devices instead of the radar. 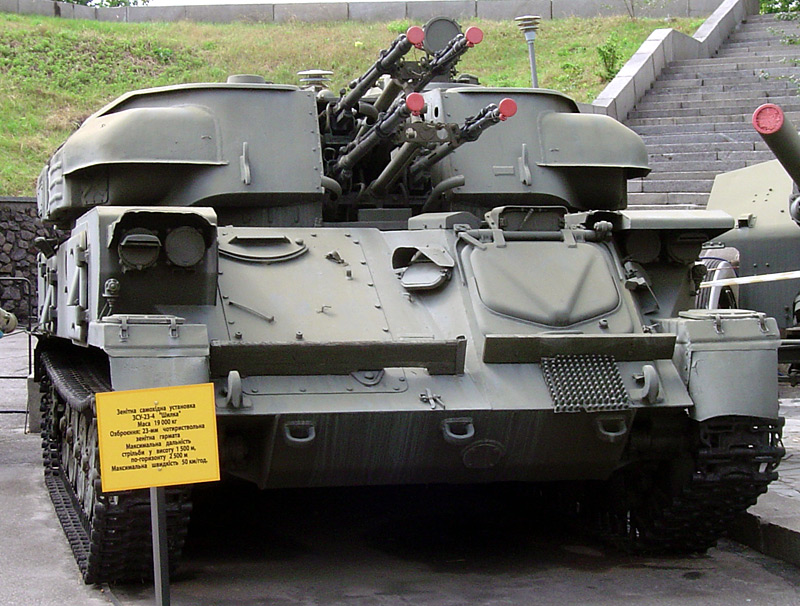