A rotary-barrel gun, which can be of the cannon type firing explosive projectiles or the machine gun type firing smaller ball ammunition, is a fast-firing weapon based on the concept of using a cluster of several barrels in a rigid mounting arranged to rotate round the cluster’s longitudinal axis in order to generate a sustained rate of fire greater than single-barrel weapons of similar calibres. The barrel cluster is located in front of a stationary gun housing. The bolt associated with each barrel is fitted with a cam follower which rides in a track machined inside the rotor housing, so that while one barrel is being fired the others are each at a different part of the clearing/reloading cycle leading to the firing of the next round from that barrel. It was also evident from the beginning of the programme that such an operating method would possess the advantages of reduced heating and wear of individual barrels. Most such weapons are externally powered to ensure that the weapon continues to function effectively despite varying chamber pressures and the occasional misfire. loading, firing, and unloading functions are performed simultaneously in different barrels as they rotate, and the rotation also permits the barrels some time to cool.

The rotating multi-barrel design very accurately synchronises the firing, extraction and reloading sequence before any particular barrel comes back into battery and is fired once again. Each barrel fires a single shot when it reaches a certain point in the cycle, after which the spent cartridge is ejected and then a new round loaded, and during the cycle the barrel cluster transfers into the surrounding air some of the heat associated with the very rapid firing of many rounds in a very short time. 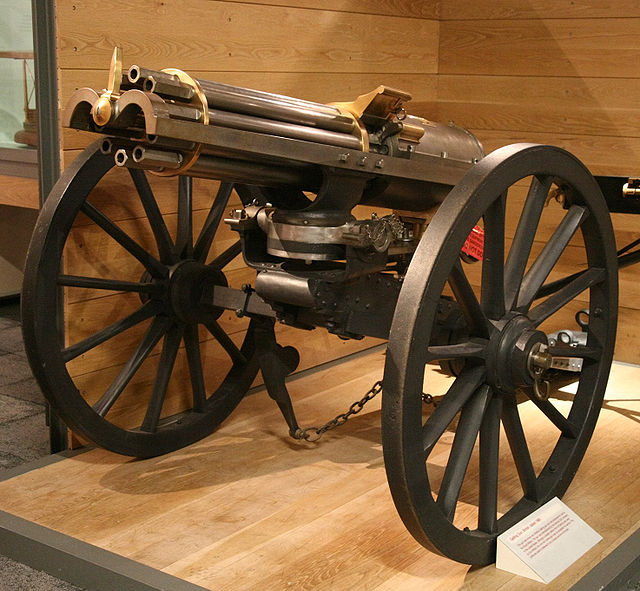 However, the weight of the Gatling and the cumbersome nature of the artillery carriage on which it had to be mounted was tactically inhibiting to infantry operating in difficult terrain, and the Gatling gun was overtaken by the lighter and more mobile machine guns, and the US Army discarded its last Gatling guns in 1911.

After it had been succeeded in service by recoil- or gas-operated single-barrel machine guns, the Gatling concept fell into abeyance for some time. Some weapons of this type were developed in the period between the two world wars, but seldom beyond the prototype stage.

In the period after World War II, the US Army Air Forces (from September 1947 the US Air Force) came to the conclusion, as a result of operational analysis of World War II air combat operations in which the 0.5-in (12.7-mm) Browning M2 machine gun had been the standard air-to-air weapon, that an automatic cannon of improved design with an extremely high rate of fire was required to achieve a sufficient number of large-calibre hits on fast-moving targets of the turbojet-powered type. On the basis of experience with the 20- and 30-mm cannon which armed most German fighters in World War II, the Americans decided that a shell of at least 20-mm calibre for a new cannon was essential, for this could carry explosive impact with more destructive force than the 0.3- and 0.5-in machine gun rounds, and thus provide for the destruction of targets after only a comparatively few amount of hits.

In June 1946, therefore, the General Electric Company was contracted to develop an aircraft gun with a high rate of fire. GE thus embarked on ‘Project Vulcan’. In their initial research, GE’s engineers called to mind experimental electrically-powered Gatling weapons of the turn of the 20th century. In 1946, a preserved Model 1903 Gatling gun was combined with a drive system based on an electric motor. Though only limited, test firing revealed a rate of fire of 5,000 rounds per minute.

In 1949 General Electric began trials of its initial weapon based on the modified Gatling concept, now called the Vulcan Gun. The first prototype was the T45 (Model A), and fired 0.6-in (15-mm) rounds at about 2,500 rounds per minute from an assembly of six barrels driven by an electric motor. In 1950 the company delivered an initial 10 guns for official evaluation, and there followed 33 T45 Model C in 1952 for additional evaluation in 15-, 20- and 27-mm calibres. Thorough trials paved the way to the selection of the 20-mm T171 for further development, and in  1956 the T171 was standardised for air force service as the M61 Vulcan aircraft cannon. 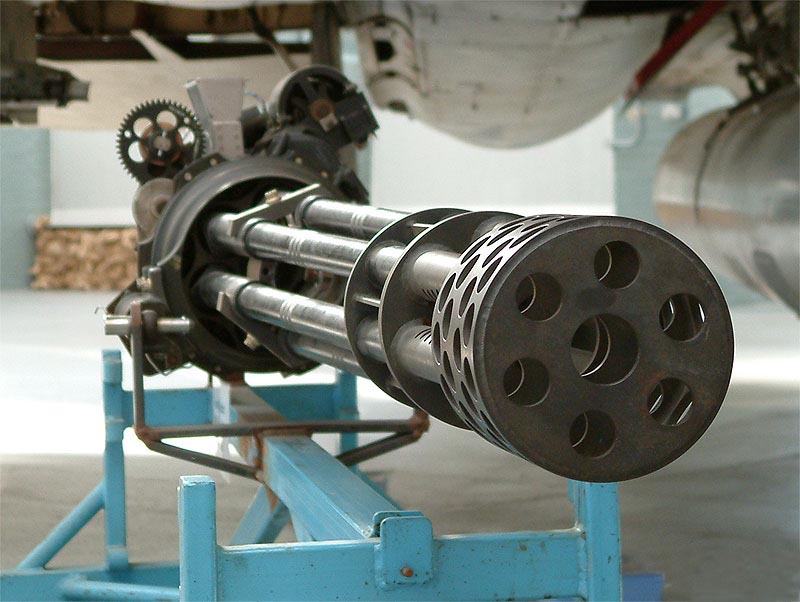 The trials process had confirmed that the rotary-barrel cannon, in both its electrically and hydraulically powered forms, was what allowed the weapon to sustain a continuous high rate of fire. A rate of 1,000 per minute of continuous fire by a single-barrel weapon usually results in barrel overheating, high levels of wear and stoppages. In a five-barrel rotary weapon, on the other hand, the same rate of fire means that each barrel fires only 200 rounds per minute, and the weapon is therefore better suited to the task of firing long bursts.

The single limiting factor is the rate at which the extraction of a spent case and the loading of a new round can occur. In a single-barrel weapon, these extraction and loading processes must alternate, but a multi-barrel design allows the tasks to happen simultaneously, using different barrels at different points in the cycle. The externally powered rotary-barrel concept also solves the problem of defective ammunition, which causes the operation of a single-barrel weapon, internally powered by gas or recoil, to halt when a cartridge fails to fire, eject or load. In the externally powered rotary-barrel weapon, however, the gun simply ejects the defective round along with the empty cartridges and continues to operate.

The M61 is the most prolific member of the Vulcan family of weapons designed by General Electric and currently manufactured by General Dynamics. The M61 is a six-barrel cannon with a firing rate of up to 6,600 20-mm rounds per minute. The same basic concept has been used for weapons in calibres ranging from 5.56 mm (0.22 in) to 37 mm. Another well-known multi-barrel design is the hydraulically driven 30-mm GAU-8 Avenger carried by the Fairchild-Republic A-10 Thunderbolt II close support and anti-tank warplane. The GAU-8 is a seven-barrel rotary cannon designed for tank-killing, and is currently the largest-calibre multi-barrel weapon in the US arsenal: the weapon is 19 ft 10.5 in (6.06 m) long and turns the scales at 4,029 lb (1827.5 kg) complete with its loaded ammunition tank (1,174 rounds) and linkless feed system. 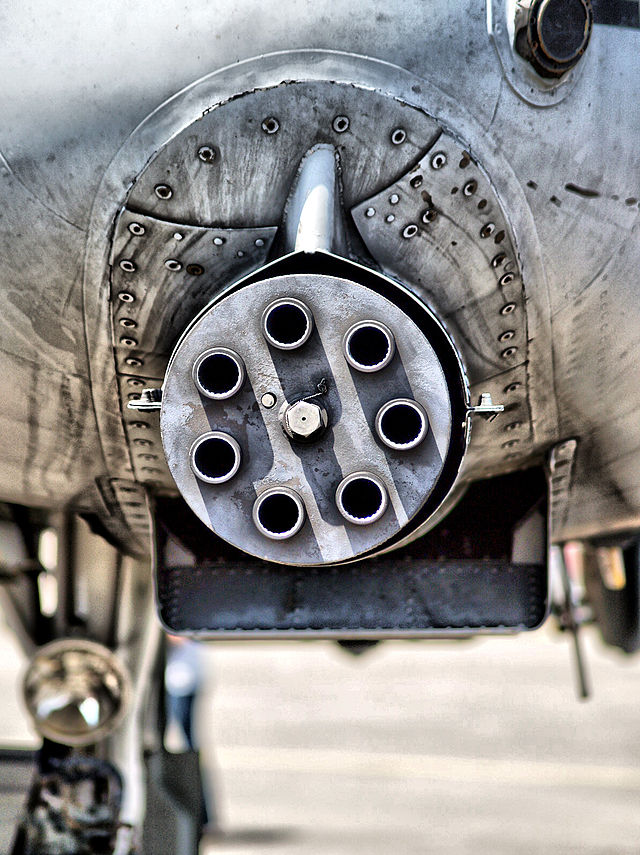