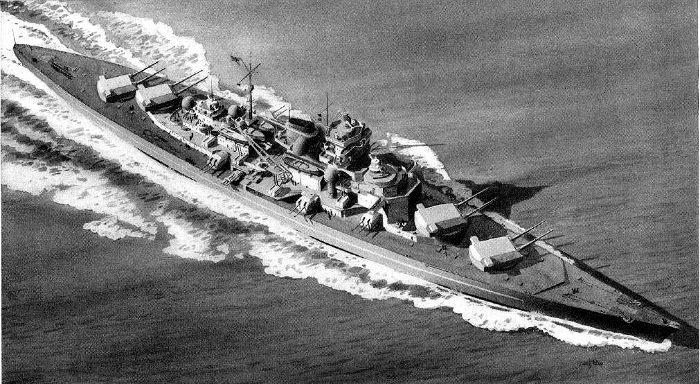 ‘Rösselsprung’ (knight’s move in chess) was the German air and sea undertaking against the PQ.17 convoy making for ports in the northern USSR between 1 and 10 July 1942. This was a crucial period for the USSR, which was in the throes of checking the German army’s various ‘Blau’ operations, and the Allies were thus making determined efforts to get through as many weapons and supplies as possible.

The Germans were well placed to intercept these convoys with ships and warplanes based in Norway. In Narvik were the pocket-battleships Admiral Scheer and Lützow together with six destroyers, and at Trondheim the battleship Tirpitz and heavy cruiser Admiral Hipper together with four destroyers. And Generaloberst Hans-Jürgen Stumpff’s Luftflotte V possessed highly capable anti-shipping air units on a number of Norwegian bases, seven of these being ideally located for air operations to intercept and attack convoys rounding the North Cape as far out as a point half way between Bjørnøya and the Spitsbergen islands. The British were not aware of the political and strategic restrictions that hemmed in the tactical and operational flexibility needed by Admiral Otto Schniewind, the Flottenchef, for a surface ship foray, and therefore decided that USSR-bound convoys would receive escort by substantial surface forces only as far east as Bjørnøya, convoys thereafter having to rely on submarine escort for protection against the German heavy surface units.

The convoy was spotted by U-boats and aircraft on 1 July as it headed well north to pass between Svalbard (Spitsbergen island) and Bjørnøya to keep as far from the German bases as possible. The route took the convoy close to Svalbard, north of Bjørnøya, and skirted the edge of the ice pack before turning south and following the coast of Novaya Zemlya before turning south-west across the Barents Sea and entering the White Sea, turning almost due south. One merchant ship suffered mechanical failure just out of port and was forced to turn back, while another turned back after suffering ice damage. The convoy was sighted and tracked by U-456 shortly after it entered the open sea, and this tracking effort was augmented from the same day by Blohm und Voss Bv 138 flying boats.

The German onslaught begins
During the evening of 1 July PQ.17 passed the homeward-bound QP.13, and shortly after this the Germans launched their first significant attack, but the Heinkel He 111 torpedo-bombers were beaten off without loss to the Allied convoy. Hamilton and his cruisers had now overtaken the convoy and were lurking to the north, and for the next two days no attacks materialised as the convoy was shielded by heavy fog. 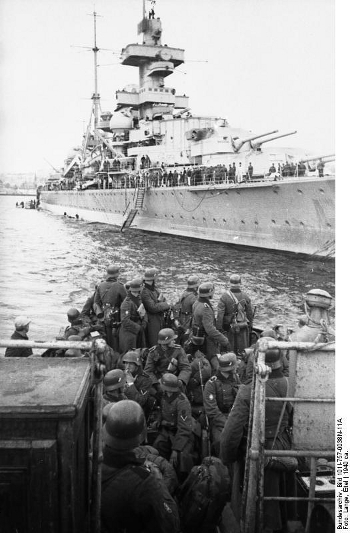 Meanwhile the Germans had been moving their heavy forces toward the Altafjord in the extreme north of Norway, Tirpitz and Admiral Hipper reaching the Lofoten islands on 3 July, by which time Admiral Scheer had arrived in the Altafjord. The Admiralty was aware that Tirpitz and Admiral Hipper had sailed from Trondheim, but did not know of the German squadron’s present location, and was also unaware of the movement of the Narvik force, which had been depleted when Lützow and three destroyers ran aground near Narvik. By 4 July the German ships were gathered in the Altafjord. The Luftwaffe began its attacks during the evening of the next day. The first losses had in fact happened on 4 July when two ships, Christopher Newport and William Hooper, fell victim to He 111 torpedo-bomber attack. At 08.30 a single merchantman was torpedoed, and at 20.30 three more merchantmen became victims of a determined attack by about 24 He 111 warplanes: two of these ships were sunk by the British escort, but the third vessel, a Soviet tanker, managed to keep up with the convoy despite her damage.

The Germans had by now been caught in the mess of restrictions imposed by Adolf Hitler on the use of heavy surface forces in the Barents Sea, so Tirpitz, Admiral Hipper and Admiral Scheer remained at anchor in the Altafjord while reconnaissance of various types was used to establish the position of the Home Fleet, Hitler’s standing orders dictating that German major surface assets should not sail until the position of British aircraft carriers had been determined. During the afternoon of 2 July the Germans had started to concentrate their forces in the Altafjord in the extreme north of Norway. Schniewind departed Trondheim for the north with Kampfgruppe I (battleship Tirpitz, heavy cruiser Admiral Hipper, destroyers Karl Galster, Friedrich Ihn, Hans Lody and Theodor Riedel, and torpedo boats T 7 and T 15) in preparation for ‘Rösselsprung’. Vizeadmiral Oskar Kummetz led Kampfgruppe II (pocket battleship Admiral Scheer, heavy cruiser Lützow, and destroyers Richard Beitzen, Z 24, Z 27, Z 28, Z 29 and Z 30) out of Narvik toward the Altafjord to join forces with the northward-bound Kampfgruppe I and destroyers Friedrich Eckoldt and Erich Steinbrinck. However, in the Grimsøya Lützow, Karl Galster, Hans Lody and Theodor Riedel were damaged after grounding.

Out and back
British reconnaissance aircraft detected the departure of the German surface forces, and at much the same time British and Soviet submarines were ordered into two patrol lines south of Bjørnøya to cover the convoy. Late on 4 July Hitler gave his permission for the surface vessels to sortie, and this they did at 11.00 on 5 July. During the day the success of aircraft and U-boats became clear, and the ships were ordered back at 22.00, but by this time Admiralty uncertainty as to the German warships’ position was leading to disaster for PQ.17. There had been a gap in the British aerial reconnaissance pattern, and Admiral Sir Dudley Pound, the First Sea Lord, felt that while it was known at 20.30 on 4 July that Tirpitz and Admiral Scheer were in the Altafjord, it was likely that all four German heavy warships (the accident to Lützow was unknown) would put to sea to fall on the convoy any time after 02.00 on 5 July. The Admiralty had to balance the threat offered by the surface forces against that of the air forces, and decided that the former was greater, especially as the cruiser escort had been ordered to stand on past its normal turn-back point after the Home Fleet units had retired as planned shortly after 12.00 on 4 July.

There followed a sequence of three catastrophic but understandable signals. At 21.11 on 4 July the Admiralty signalled ‘Most Immediate. Cruiser force withdraw to westward at high speed’, followed at 21.23 by ‘Immediate. Owing to the threat of surface ships convoy is to disperse and proceed to Russian ports’, and finally at 21.36 by ‘Most Immediate. My 9.23 of the 4th. Convoy is to scatter’. The convoy was thus left on its own against the efforts of the Luftwaffe and the U-boat arm in latitudes where the protection of the summer nights is short. Broome wished to stay with the convoy, but Hamilton was confident that the orders of 21.11 and 21.23 meant that the two escort forces were to fall back on the Home Fleet for a concentrated descent on the German forces emerging from the Altafjord.

PQ.17 scatters and is destroyed
The convoy scattered at 22.15 with naval support provided by only the anti-aircraft auxiliary and a few armed trawlers, and the scattered merchant ships were easy prey for U-boats and aircraft. On 5 July 12 vessels were lost, six of them (including Fairfield City and Daniel Morgan) to air attack, and the other six to four different U-boats: among the losses that day were the US merchant ships Pan Kraft, Washington, Carlton, Honomu and Peter Kerr. On 6 July two more ships were sunk, Pan Atlantic by air attack and the John Witherspoon by U-225. On 7/8 July five more ships, including Olopana and Alcoa Ranger, were sunk, two of them by U-225. The remaining escort vessels withdrew into the Arctic Ocean on 9 July, but the merchant ships suffered no more during that day. The last losses were Hoosier and El Capitan on 10 July. The Luftwaffe had flown 202 sorties against the convoy. Two of the surviving ships made port at Arkhangyel’sk on July 10, and another nine arrived there or at Murmansk over the following week. Of the 33-ship convoy, therefore, only 11 vessels reached port. Of the merchant ships lost, nine had succumbed to air attack and the others to 82 torpedoes fired by U-boats.

The German losses were two bombers, three torpedo-bombers and two reconnaissance aircraft, and for this the Germans killed 153 merchant seamen and destroyed 99,316 of the 156,492 tons of cargo loaded, together with 430 of 594 tanks, 210 of 297 aircraft and 3,350 of 4,246 vehicles. Two of PQ.17’s surviving ships, Silver Sword and the Bellingham, were sunk on their return journeys, one of them as U-255’s fifth victim. In the Allied camp there were great repercussions after the disaster, and Prime Minister Winston Churchill was so shocked by the catastrophe that he refused permission for the next PQ sailing until September 1942. In this time the British had improved their methods and provided more than 50 escorts, so that while 13 of PQ.18’s 40 merchantmen were lost, the Germans also paid a heavy price in the form of four U-boats and 41 aircraft. Even so, all Arctic convoys were suspended until the darkness of winter offered a greater chance of success, and the PQ.19/JW.51 outbound/homebound convoys therefore sailed only in December 1942.