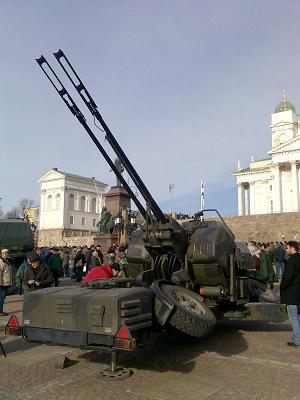 Although the defence of ground and naval forces is generally considered to be the province of the surface-to-air missile, there is still an important place on the land and sea battlefields for the anti-aircraft gun in its modern form as a powered mounting for one or more cannon in the calibre range between 20 and 40 mm firing an explosive projectile and often with provision for command and control from a higher-level fire-control system.

One of the most impressive of such equipment is the Rheinmetall GDF with two 35-mm cannon. The design and manufacture of this long-lived weapon have gone through several changes of nomenclature and ownership. Introduced in the early 1960s by the Swiss company Oerlikon-Bührle (later Oerlikon Contraves, and now Rheinmetall Air Defence AG since the merger of the companies in 2009), the 2 ZLA/353 MK became known as the GDF-001 or as the K-63, and was the first production variant of the heavyweight member of the manufacturer’s series of land-mobile AA mountings. It was designed from the late 1950s primarily for use in the surface-to-air role but has a significant surface-to-surface capability. The range of HEI, HEI-T and SAPHEI-T ammunition is fired at the muzzle velocity of 1175 m (3,855 ft) per second from the two KDB (formerly 353 MK) cannon. The system has an on-mounting optical sight, but is best used as a battery of two such equipments supported by a radar-directed fire-control system. The GDF-001’s weights are 6300 kg (13,889 1b) in travelling order without ammunition or accessories, rising to 6700 kg (14,771 lb) complete with ammunition and accessories. The GDF mounting is supported on a two-axle carriage towed by any suitable 6×6 5-ton truck. In firing position the carriage is stabilised by an arrangement of three jacks, comprising one at the rear of the carriage and one on each of two lateral outriggers located towards the front of the carriage. The wheels are then lifted to rest well clear of the ground with their upper portions and mudguards inclined inward over the carriage. An electro-hydraulic system is used for jack and wheel actuation, allowing the equipment to be brought into action in 1.5 minutes by three men or in 2.5 minutes by one man. The system also possesses a manually pumped system for emergency use, which brings the equipment into action in 5 minutes. The same type of electro-hydraulic actuation is used for mounting traverse at the rate of 114.5° per second, with an acceleration of 145.25° per second²; and gun elevation at the rate of 57.3° per second, with an acceleration of 114.5° per second². In the basic system electrical power for all carriage and mounting functions is supplied by an off-carriage generator.

The KDB cannon weighs 430 kg (948 lb) complete with its 120-kg (264.55-lb) barrel and is a gas-operated weapon. In this application it is carried on a cradle fitted with a hydro-mechanical recoil system. The GDF’s two weapons are cradle-mounted comparatively close to each other in the centre of the mounting, just in front of the gunner, and can be fitted with devices for measurement of muzzle velocity, which improves considerably the continuously computed fire-control solution provided by an off-carriage fire-control system. The cannon are automatically fed, by means of electrically or manually tensioned springs driving a conveyor system, with ammunition from seven-round clips located in horizontal layers in the 56-round containers placed outside each breech. The containers are themselves replenished manually with clips drawn from the 126-round reserve supply carried on the mounting.

The GDF-002 is an updated version available from 1980, which can handle target data in digital rather than analog form, and has a Ferranti Type GSA Mk 3 optical sight. The only factor that requires manual insertion with the GSA Mk 3 is estimated target range. This comparatively simple evolution of the basic mounting provides faster and more accurate laying of the cannon in both bearing and elevation. Both the GDF-001 and GDF-002 can also be enhanced with any of three optional packages, known to Oerlikon-Bührle as the NDF-A, NDF-B and NDF-C Combat Improvement Kits.

The most complete of these is the NDF-C kit, which offers optimisation of the weapons’ automatic functions, to stabilise the rate of fire at a combined total of 680 rounds per minute as a means of reducing wear and preventing highly stressed components from becoming overtaxed; a weapon cover with an integral and fully automatic weapon-lubrication system that also enhances protection against sand, rain etc; a weapon camouflage facility; automatic reloaders, with the cannon elevated to the vertical position so that a hydraulic-mechanical device can ram the clips forward into the on-mounting containers from a manually-replenished ready-use supply that increases the ready-use supply to 280 rounds; an integral power supply; and, perhaps most important of all, a Contraves Gun-King sight system. Compared with this upgraded standard, the NDF-A kit offers weapon lubrication, weapon optimisation, camouflage and automatic reloading; and the NDF-B kit provides weapon lubrication, weapon optimisation, camouflage, automatic reloading and a gunner’s cab.

The NDF-A and NDF-B kits retain the GSA Mk 3 sight and cannot be fitted with a power unit. GDF-002 weapons built with the NDF-A package are designated GDF-003. Gun-King is a self-contained system providing 3D optronic tracking once the gunner has brought the sight crosshairs onto the target and started to track it. The sight provides the system’s digital computer with angular tracking data and an inbuilt laser rangefinder provides range data for processing with pre-loaded details about the ambient air and ammunition to provide an optimised fire-control solution, whose automatic insertion into the fire-control system is reported to the gunner by an audible signal. The gunner has then only to use his trigger, and the continuously updated fire-control solution is further enhanced by the muzzle velocity measurement system attached to the cannon muzzles.

The system allows extremely fast reaction to a pop-up target, and also provides great flexibility in the engagement of successive targets. The x8 magnification optics of the Gun-King sight, which has an 8° field of vision, are sufficiently sensitive to make possible night engagements in good conditions.

For reloading purposes the barrels automatically move into the 90° elevation position, and the automatic reloading process is started by pressure on the relevant button on the gunner’s console. Replenishment of the horizontally configured automatic reloaders is manual, each reloader being fed with a maximum 12 seven-round clips. The current GDF-005 was introduced in May 1985. It is, in essence, the basic mounting with two KDC cannon and a breech recoil brake and other modern features, plus the full range of NDF-C Combat Improvement Kit modifications. This includes the Gun-King sight to increase effective slant range to 4000 m (4,375 yards). The mounting is fitted with an automatic reloader, reducing the crew from three to one, for the ready-use supply of 280 rounds per gun. This on-mounting supply of 560 rounds, compared with 224 in earlier versions, is considered sufficient for 10 bursts under typical combat conditions. The GDF-005 has a permanently attached power unit, and this drives the electro-hydraulic unit which carries out the outrigger extension, jack activation, wheel pivoting and push-button levelling when mounting or dismounting the weapon; for gun functions; and for the weapon lubrication systems.

The GDF series is basically a clear-weather system with limited night capability in some models. The defensive requirement is best met by linking the mountings to a radar-directed fire-control system, initially the Contraves Super-Fledermaus and more recently the Contraves Skyguard. One Super-Fledermaus fire-control system can generally co-ordinate two or four GDF mountings. An increasingly more common arrangement pairs two GDF mountings with two quadruple launchers for RIM-7 Sparrow or Aspide medium-range SAMs under the control of a Skyguard fire-control system. This creates a layered defence system for high-value installations or sites. The Contraves Skyguard fire-control system was designed for the control of AA batteries equipped with guns or missiles, as well as a mixed defence using heavy cannon and short-range missiles. The system, based on the same towed two-axle chassis as the GDF gun mounting, is essentially a container-mounted system with an overhead arrangement of sensor heads, and entered production in 1975 as successor to the Super-Fledermaus equipment, providing more modern hardware, separate search and tracking radars, and digital rather than analog computing. The radar is provided by Ericsson of Sweden, and comprises a UAR 1021 I/J-band coherent pulse-Doppler search and tracking equipment with its antennae on a mounting about the mobile housing to provide search capability to a range of 20000 m (21,875 yards). The separate monopulse-Doppler tracking element provides tracking from a range of 11200 m (12,250 yards) down to 300 m (330 yards). The system offers high rejection of clutter and ECM, together with moving target indication of multiple targets. The radar is backed by automatic closed-circuit TV tracking. Data are fed into a Contraves Cora II M computer, a real-time unit that undertakes the functions of system check, threat evaluation, and fire-control solution for guns and missiles.

Working on the basis of the Skyguard system the Brazilian company Avibras has developed a new fire-control system designed for 35- and 40-mm guns with growth potential for SAMs. This system is designated EDT-FILA (Fighting Intruders at Low Altitude), and is carried on a two-axle towed trailer with a body of reinforced fibre-glass. Though modelled on Skyguard with its I/J-band search and tracking radars and its TC tracker, the EDT-FILA adds features such as an extra K/L-band tracking radar with fully integrated laser rangefinder, and an advanced C-2001 digital computer with comprehensive self-test, diagnosis and operational software.

Super-Fledermaus is also a towed system, again based on a two-axle chassis with accommodation for the tactical crew inside an extending shelter at the rear of the trailer. The system weighs some 5000 kg (11,023 lb) and was designed for the control of three heavy-calibre guns or three SAM launchers. This system has a combined head for the visual tracker and Siemens-Albis search/tracking radar, allowing target detection by helical or sector scanning at ranges up to 50000 m (54,680 yards), followed by target tracking at ranges inwards from 40000 m (43,745 yards). The computer allows for ambient air conditions and gun parallax, and delivers a continuously updated fire-control solution, improved further during firing by three integral muzzle-velocity measurement sets. The equipment can be operated in manual, semi-automatic and automatic modes. Additional features are the possibility of linkage into a higher-level detection system, and the use of a putting-on capability to allow rapid re-direction of the system should the spotting number detect an unexpected target.

Further developments of the GDF towed AA cannon system series are the GDF-006 (GDF-001/002/003 upgraded with AHEAD ammunition) and the GDF-007 (GDF-005 upgraded with AHEAD ammunition). The Type 90 is the Chinese licence-manufactured copy of GDF-002, the Samavat is the Iranian model with a night vision sight and used with Skyguard and Super-Fledermaus fire-control systems, and the Amoun is the Egyptian version with the Skyguard fire-control system linking with a Sparrow SAM launcher. Other equipments using the same pair of GDF cannon are self-propelled guns such as the German Gepard using the chassis of the Leopard 1 main battle tank; British Marksman based around the Marksman turret that could be installed on numerous tank chassis (the only model that went into production was a version based on the T-55 chassis for Finland); Type 87 Japanese SPAAG; PZA Loara Polish SPAAG based on the PT-91 tank; Type 87 Japanese SPAAG; and ItPsv 90 Finnish SPAAG.

Rate of fire (per barrel): 550 rounds per minute (cyclic)