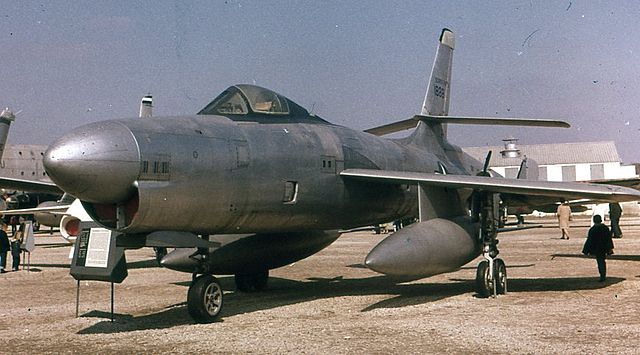 Bearing a close conceptual and structural resemblance with the P-84 (later F-84) Thunderjet series in its fuselage and the F-84F Thunderstreak in its swept tail unit, Republic’s design for a ‘penetration fighter’ received an initial US Army Air Forces order in March 1946 for two XP-91 prototypes which emerged only after the USAAF had become the US Air Force and the P-for-Pursuit category had been replaced by the F-for-Fighter category.

The designation thereupon became F-91, and by this time, the role envisaged for the aeroplane had been changed from escorting to high-altitude interception (an altitude of 47,500 ft / 14480 m to be reached in 2 minutes 30 seconds), with the turbojet boosted by a quartet of liquid-propellant rocket motors grouped at the tail. In this form, the aeroplane was seen as providing interim capabilities against Soviet bombers until the advent of the ‘ultimate interceptor’ which was under development as the Convair Model 8 for service as the F-102 Delta Dagger.

Given the company designation AP-31, the Republic aeroplane was based on an essentially conventional light alloy structure but nonetheless incorporated a number of highly unusual features in its wing and landing gear. The core of the structure was the oval-section fuselage carrying, from front to rear, provision for a fixed forward-firing armament of four 20mm cannon, the pilot’s cockpit under a clear-view canopy with a central section that lifted up and back on parallel arms to provide access and egress, the powerplant, and the tail unit.

This was initially proposed as a ‘butterfly’ or V-type unit with hinged rear sections that served as rudders and elevators, although the first prototype was in fact completed, as noted above, with a more conventional swept tail unit derived from that of the F-84F with single vertical and horizontal surfaces. The former comprised a fin and inset rudder, while the latter comprised the flat halves of the all-moving ‘slab’ tailplane located at the base of the fin just below the lower edge of the rudder.

The wing was characterised by a quarter-chord sweep angle of 35°, and was highly unusual in the fact that its flat halves were of variable incidence and inversely tapered in thickness and chord. The variable-incidence feature allowed a higher angle of attack to be selected for take-off and landing, with consequent reduction in take-off and landing speeds, while the inverse taper in thickness and chord meant that the wing was broader and thicker at its only very slightly rounded tips than its roots, with a consequent reduction in the tendency to suffer low-speed stalling at the tips.

This tendency was further exacerbated by the provision across virtually the full span of the leading edges of automatic slats, and in a comparable fashion virtually the full span of the trailing edges was occupied by outboard ailerons and inboard Fowler flaps. The airframe proper was completed by the landing gear, which was of the tricycle type with a single-wheel nose unit and tandem-wheel main units: the nose wheel unit retracted forward into a door-covered bay in the underside of the nose, while as a result of the wing’s unusual configuration the main wheel units retracted outward into door-covered bays in the underside of the wing near the tips.

The powerplant was based on one General Electric J47-GE-3 axial-flow turbojet engine, a slim axial-flow unit installed in a straight-through installation with aspiration via a circular nose inlet and exhaust via a nozzle behind the tail unit. The planned booster package was to comprise four Curtiss-Wright XLR-27 liquid-propellant rockets each offering an unthrottled thrust of 2,100 lb st (9.34 kN) for 90 seconds. Together with the turbojet engine, this was designed to provide the required climb performance as well as the ability to fight at a speed of 688 kt (792 mph; 1274.5 km/h) or Mach 1.20 for three minutes before descending in five minutes to land, refuel and rearm.  However, the development of the XLR-27 rocket motor was not completed.

The first XF-91 prototype recorded its maiden flight on 9 May 1949 with the J47-GE-3 engine in its plainest possible form without an afterburner, but in October of the same year flew in more definitive interceptor form with the afterburning version of the J47-GE-3 engine and booster power through the addition of a Reaction Motors XLR11-RM-9 rocket motor. This latter was a throttlable four-chamber unit installed with two chambers above the afterburner unit and two below it, and its availability made the XF-91 the first US aeroplane designed for a combat role to exceed Mach 1, an event that took place in December 1952 when the prototype reached 642.5 kt (740 mph; 1191 km/h) or Mach 1.12 at 50,000 ft (15240 m).

By this time the USAF had decided to accelerate the F-102 programme, and as a result all consideration of an F-91A production version of the XF-91 had been abandoned, the two prototypes being retained for test purposes. These test purposes included evaluation of the ‘butterfly’ tail which had originally been proposed for the aeroplane: after its tail had been severely damaged by a fire late in 1951, and was rebuilt with the V-type tail for evaluation from a time late in 1952. The first prototype had meanwhile been revised to a different standard with search radar in a radome above a chin inlet in the fashion of the North American F-86D Sabre. 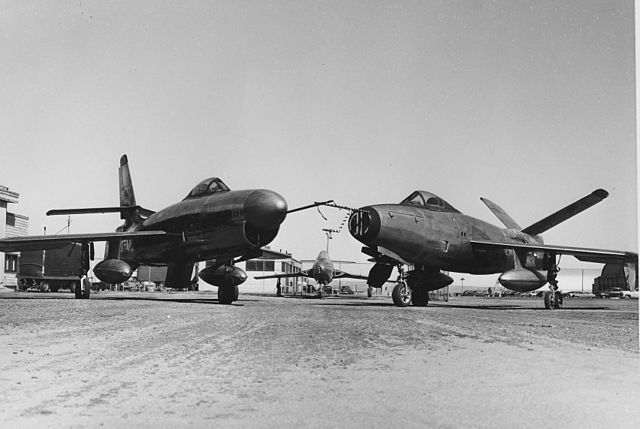 Armament: (proposed) four 20-mm fixed forward-firing cannon in the forward fuselage, and up to a not available weight of disposable stores carried on two hardpoints (both under the wing), and generally comprising bombs or multiple launchers for 2.75 in (70 mm) FFAR air-to-air unguided rockets

Equipment: standard communication and navigation equipment, plus provision for a gyro gun sight