Almost universally known by the designation I-153 rather than the alternative I-15ter (exactly the opposite of the practice with the I-15bis that was known only to a very lesser extent as the I-152), the I-153 was nicknamed as the Chaika (seagull) and was arguably the most capable of all biplane fighters. The type was obsolete even before it appeared, however, and the continued reliance placed on it by the USSR, pending the availability of large numbers of more advanced fighters, was one of the technical reasons for the Soviet air force’s crushing defeat by the Luftwaffe in the first weeks and months of the German invasion that started in June 1941 and opened the ‘Great Patriotic War’ of World War II.

The origins of this fighter can be found in a Kremlin meeting of July 1937, when the Soviet military and political leadership met to assess the performance of the Soviet weapons supplied to the Republican government side that was already hard pressed in the Spanish Civil War (1936/39) by the Nationalist side that was enjoying German and Italian support. One of the weapons supplied by the USSR was the Polikarpov I-16 low-wing cantilever monoplane, the first ‘modern’ fighter to enter service anywhere in the world with features such as retractable main landing gear units and an enclosed cockpit. Ignoring a number of other factors such as tactics and training, initial reports had suggested the technical inferiority of this fighter to the Fiat CR.32 biplane operated by the Nationalist side. Despite the fact that the Messerschmitt Bf 109B was already beginning to show in Spain what could be achieved by a highly loaded monoplane fighter, the consensus of the Kremlin meeting was now that a new biplane fighter should be developed. 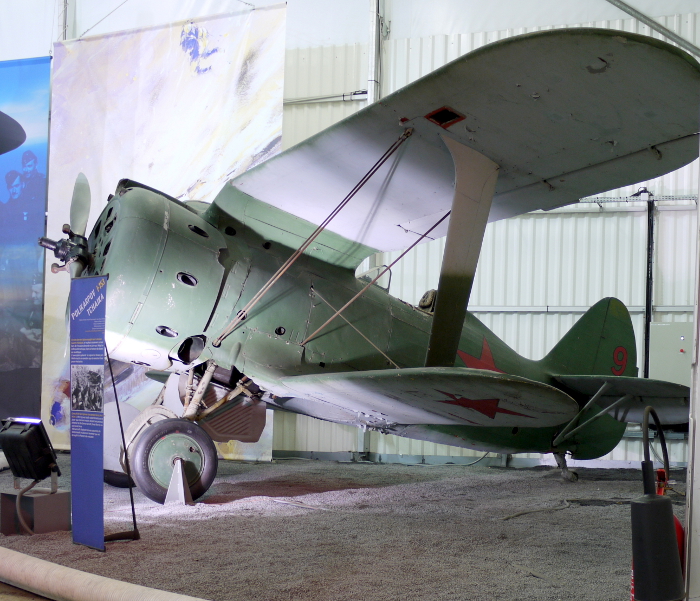 Logical extrapolation
The task was logically entrusted to the Polikarpov Design Bureau, the originator of the successful I-5, I-15 and I-15bis (I-152) series, and by October 1937 Polikarpov had secured approval for an improved version of the I-15bis designed under the supervision of Aleksei Yakovlyevich Shchyerbakov with the assistance of Artem Ivanovich Mikoyan and Mikhail Iosifovich Guryevich. This was the I-15ter, which in external configuration appeared to be little more than the I-15bis with an upper wing whose inboard ends were now gulled into the line of the upper fuselage in the fashion of the original I-15, tailwheel landing gear including manually operated upward-retracting main units with still wider tyres, and improved equipment including an engine-driven generator, battery, navigation lights and, in a proportion of the production aircraft, radio. The new fighter retained basically the same four-gun armament as its I-15bis predecessor, but the older fighter’s 0.3 in (7.62 mm) PV-1 machine gun was now replaced by the ShKAS machine gun of the same calibre but firing at a considerably higher rate (1,800 rather than 750 rounds per minute) for a much greater weight of fire. The new fighter was to be powered by the Shvetsov M-62 air-cooled nine-cylinder radial engine, which was an improved derivative of the Shvetsov M-25 (a development of the US Wright R-1820 Cyclone) that powered the I-15 and I-15bis and fitted with two superchargers.

Internally, the I-15ter was based on a refined and wholly restressed version of the I-15bis’s welded steel fuselage and tail unit in combination with an unequal-span biplane wing cellule with fabric covering over a structure of wood and, in the case of the long-span ailerons on the upper wing, welded steel tube. The halves of the dihedralled lower wing extended from the lower longerons with junctions that were carefully faired, while the two gulled and dihedralled halves of the upper wing extended from the upper fuselage. The upper and lower wings were separated on each side by a single I-type interplane strut that was angled outward from bottom to top, and the whole wing cellule was braced with the standard arrangement of flying and landing wires. Although the I-15ter’s wing cellule reverted to the configuration of the I-15, albeit with slightly reduced area, it retained the revised aerofoil section introduced in the I-15bis.

One development too far
The I-15ter first flew in the summer of 1938, and full manufacturer and NII (scientific test institute) trials were successfully completed in the autumn of the same year. The type offered significant performance improvements over the I-15bis, and was immediately ordered into large-scale production that attained a tempo of 48 aircraft per week in the later part of 1939. The I-153 was manufactured at GAZ-1, which delivered 1,011, 2,362 and 64 aircraft in 1939, 1940 and 1941 respectively for an overall total of 3,437 machines.

The I-153 entered squadron service in the early summer of 1939, initially with units facing the possibility of action against the Japanese in the Far East, and was first used in action during July of that year in the Khalkin Gol clash (May/August 1939) on the Outer Mongolian frontier between the USSR and Manchukuo (Japanese Manchuria). In this fighting the I-153 was opposed mainly by the Nakajima Ki-27, which had a lower-powered engine but was a cantilever monoplane and generally achieved a limited superiority over its Soviet biplane opponent.

The lack of a monoplane successor to the I-153, whose obsolescence was generally admitted after the Khalkin Gol fighting in the summer of 1939, meant that the type had to be retained not only in service but also in production, albeit in an improved form. Moves in this direction had already been made. There was little that could be achieved to improve the performance and handling of the I-153, which represented one of the high points in biplane fighter design, so additional capability was created by a a strengthening of the type’s fixed forward-firing armament. The I-153 had undergone trials with two 0.5 in (12.7 mm) TKB-150 (later designated Beresin BS) synchronised machine guns, and about 150 aircraft were built to this I-153BS standard with a single TKB-150 in the fuselage and two 0.3 in (7.62 mm) ShKAS machine guns in the wing, only one TKB-150 being used because of the shortage of this weapon which was shared with the Polikarpov I-16 Tip 29. Late in production, about 400 aircraft had been modified with metal plates under the lower wing to accommodate 3.2 in (82 mm) RS-82 unguided rockets.

Definitive form
The definitive answer was the I-153bis with the original 0.3 in (7.62 mm) ShKAS machine guns replaced by 0.5 in (12.7 mm) Beresin BS weapons, the type’s disposable warload diversified by adding provision for unguided rockets, and the performance improved modestly by the adoption of an uprated powerplant and the addition of capability for the carriage of two drop tanks, which were the first of their kind to enter large-scale service anywhere in the world. Some 50 aircraft with drop tanks were used primarily by the Soviet naval air arm. The selected engine was the M-62, whose introduction offered significant enhancement of the I-153BS’s climb rate and high-altitude speed although the engine’s greater power also meant a decrease in range on internal fuel. From a time early in 1940 the M-62 engine was supplanted by the M-63 unit, which was Shvetsov’s 1939 development of his own M-62 derivative of the Cyclone with a rating of 1,100 hp (820 kW). The M-63 drove the same AV-1 propeller as the M-62.

Also delivered from 1939, albeit only in modest numbers, the I-153P (Pushyechnii, or cannon) differed from the I-153BS only in having a fixed forward-firing armament of two 20 mm ShVAK cannon.

Production of the I-153 series ended early in 1941 after the delivery of 3,437 aircraft including a small number delivered to China for service in the 2nd Sino-Japanese War (1937/45). The majority of the Soviet fleet was still in service when Germany invaded the USSR in June 1941, and losses on the ground and in the air were extremely heavy in the opening weeks of the campaign. By the end of 1941, most of the surviving aircraft had been withdrawn from fighter service and reallocated to the ground-attack role, in which they remained operational up to 1943 in subvariants such as the I-153Sh and I-153USh with underwing containers carrying ShKAS machine guns and 5.5 lb (2.5 kg) bombs.

Finland captured a number of aircraft that were placed in Finnish service after being revised with Browning machine guns, and Germany supplied another 14 such aircraft its own forces had captured. At least eight of the aircraft survived to the Russo-Finnish armistice of September 1944.

Experimental developments
The I-153V (Vysotnyi, or height) version was a single aeroplane revised with a Shchyerbakov pressure cabin. This was a capsule of the minimum-leak regenerative type, fabricated of welded aluminium alloy with all its apertures sealed by rubber, and much improved glazing with large slabs of curved 0.24 in (6 mm) Plexiglas in a heavily framed hinged hood giving the pilot fields of vision not markedly inferior to those provided by a normal enclosed cockpit. This cabin weighed 99 lb (45 kg), and the empty weight of the I-153V was 3,391 lb (1538 kg).

The I-153UD was schemed as a means of saving metal, the variant introducing a rear fuselage completed as a wooden semi-monocoque rather than fabric-covered unit built of steel and wood, but did not enter production.

The I-190 was an experimental development with the Tumanskii M-88V air-cooled 14-cylinder two-row radial engine, a development of the French Gnome-Rhône 14K Mistral-Major and rated at 1,100 hp (820 kW). The aeroplane was armed with two ShVAK cannon and four ShKAS machine guns. First flown on 30 December 1939, the prototype crashed 13 February 1941 and development of this variant was thereupon discontinued.

The I-190GK (Germetichyeskoi Kabine, or hermetic [pressure] cabin) was the second I-190 prototype completed with a pressure cabin and turbocharged Shvetsov M-90 air-cooled 18-cylinder two-row radial engine rated at up to 1,500 hp (1118.5 kW) and driving a propeller fitted with a ducted spinner.

The uncompleted I-195 was to have been a strengthened version of the I-190 with an enclosed but unpressurised cockpit, the same powerplant as the I-190GK, and the same armament as the I-190.

Accommodation: pilot in an open cockpit