Very widely used on warships of the US Navy and allied powers, the Raytheon (originally General Dynamics) Phalanx Mk 16 naval 20-mm multi-barrel close-in AA weapon system was developed in the early/mid-1970s to provide an effective integrated ‘last-ditch’ defence against anti-ship missiles and attack aircraft at very close ranges. Once activated, the system operates in an autonomous and automatic fashion to search for and detect possible targets, undertake prioritisation of these threats, track the most threatening of them and, at the appropriate moment, open fire on the single target representing the greatest threat. The system is monitored by a single operator at a panel located separately from the equipment, and at any stage this operator can override the automatic operation of the system by depressing a ‘hold fire’ button. Unless overridden in this fashion, the system automatically engages any aerial target approaching the parent vessel at high speed within the two designated 155° sectors allocated to the mounting. The Phalanx system also possesses a secondary capability against targets designated by the ship’s higher-level fire-control systems, and a tertiary capability against small surface vessels under control of an optronic director or other fire-control system.

The origins of the concept go back to the mid-1960s, and development was spurred by the sinking of the Israeli destroyer Eilat by a Soviet-supplied SS-N-2 ‘Styx’ anti-ship missile launched by an Egyptian fast attack craft lying safely in harbour. Work was already in hand on the Basic Point-Defense Missile System (BPMDS) using the RIM-7 Sea Sparrow SAM, but the US Navy rightly appreciated the need for a simpler, lighter and yet fully effective weapon system that could be installed on even the smallest surface combatants. Such a system would complement the BPMDS in dealing with threats which ‘leaked’ through the surface battle group’s two outer defence layers, comprising fighters and long/medium-range area defence SAM systems.

A feasibility study was awarded to the Pomona Division of General Dynamics in 1969, and the result was the Phalanx system that began to enter much-delayed service in 1980. The first prototype system was delivered to the US Navy for evaluation on the ‘Farragut’ class guided missile destroyer King during 1973, and it was then decided that improvements were required to improve the system’s performance and reliability. Subsequently, the Phalanx Operational Suitability Model successfully completed its operational test and evaluation on the ‘Forrest Sherman’ class destroyer Bigelow during 1977, when the upgraded OSM exceeded operational maintenance, reliability and serviceability requirements. After further development and trials, the system was approved for production in 1978. Production of the Phalanx system began with orders for 37 systems in the form of 23 for the US Navy and 14 for export. The first ship fully fitted with the Phalanx system was the ‘Midway’ class aircraft carrier Coral Sea in 1980, and in 1984 the US Navy began to install Phalanx CIWS systems on non-combatant vessels. 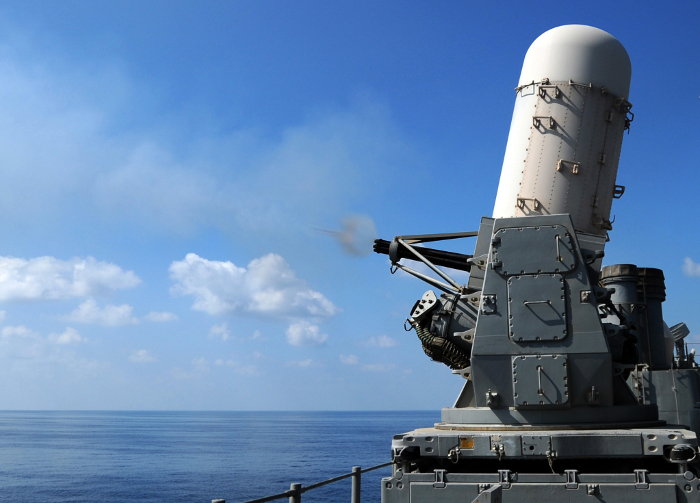 System description
The core of Phalanx system comprises the weapon, its ammunition and the fire-control system. The weapon selected for the task is the General Electric Mk 26, a development of the M168 Vulcan used in the US Army’s M163 and M167 point-defence gun mountings, and itself based on the classic M61A1 Vulcan cannon used in almost every US fighter of the period. The cannon has a rotating assembly of six barrels and is externally powered, in the case of the Phalanx system by an electrically-driven hydraulic system. This gives a very high rate of fire with extreme reliability under all operational conditions. So far as the Phalanx system is concerned, one of the cannon’s primary attributes is its independence of gun gas or recoil for its operation. A self-powered weapon ceases to fire if a round misfires, but in the Vulcan cannon the round is merely extracted by the system’s closed-loop ammunition cycle and returned, together with the spent cases, to the rear of the ammunition drum under the cannon. The cannon and its ammunition drum are located at the base of the trunnion-mounted armament/radar assembly, which can be elevated at a maximum rate of 100° per second and is itself located on the turntable of the Mk 72’s mounting, which traverses at a maximum rate of 100° per second. The system’s magazine drum is directly under the cannon, with fresh rounds drawn from the front by the closed-loop feed system. The magazine’s capacity of 1,000 rounds was planned as sufficient for five separate engagements before having to be reloaded, a process that can be undertaken at the rate of 400 rounds per minute between engagements. This was later deemed to be insufficient, and the magazine capacity was then increased to 1,400 or 1,600 rounds in later-production systems, which are designated Phalanx Mk 16 Model 1. This has other improvements as well, such as increased search volume for the radar, and an option of two firing rates for the cannon.

Ammunition types
The Vulcan cannon can fire a variety of standard 20-mm rounds (most notably the M53 AP-T, M54 HP-T, M55A2 TP, M56A3 HEI, M220 TP-T and M242 HEI-T), but in the Phalanx is used with the Mk 149 round developed specially for this application. This is an APDS-I (armour-piercing discarding sabot – incendiary) round with a penetrator of depleted uranium, which is about 2.5 times denser than steel and inherently pyrophoric. The penetrator is a sub-calibre type, with a diameter of only 0.5 in (12.7 mm), enclosed in a nylon sabot with an aluminium pusher at its base. The sabot and pusher fall away at the muzzle, leaving the penetrator with a velocity of some 3,600 ft (1097 m) per second which is lost only slowly because of the penetrator’s low drag. For export customers there is a Mk 149 variant with a tungsten penetrator, and this was later adopted by the US Navy as its standard round.

The combination of mass and high velocity produces great kinetic energy delivered onto the target and intended to detonate the incoming warhead, while the combination of flat trajectory and short flight time eases the fire-control problem to a marked degree.

Closed-loop fire-control system
The fire-control system is the single most important element in Phalanx, and is a pioneering example of the closed-loop electronic spotting technique to increase accuracy and reduce reaction time. The mounting is fitted with a modified Ku-band VPS-2 pulse-Doppler radar with a single transmitter and two receiver antennae in the radome above the cannon. The radar assembly/radome is carried by the same trunnion mounting as the cannon to traverse and elevate with the weapon. The upper antenna rotates and is dedicated to search, while the lower antenna can nod slightly and is dedicated to tracking. The radars undertake simultaneous tracking of the incoming target and outgoing burst of fire, data being processed digitally in the fire-control computer to generate, even before the first rounds have reached the target, the aiming instructions that make the two coincide in time and space.

Firing generally begins with the target at a range of 2,000 yards (1830 m) for an optimum destruction range of 500 yards (460 m), where the concentration of 20-mm projectiles is at its densest.

The system was designed on a modular basis, and the single Phalanx mounting accommodates the 20-mm cannon, its magazine and the associated radars and fire-control package. It needs only to be bolted down in the correct location and wired into the parent ship’s electrical and command system. The system has been upgraded, typically by an increase in magazine capacity, while other modifications add two fire-rate options. Further upgrade may be possible, with options such as a 30-mm cannon and superior target-detection capability under consideration.

Evolving development
As a result of the continuing evolution of both threats and computer technology, the Phalanx system is akin to most military systems in its development through a number of different models. The original model was the Block 0, equipped with first-generation solid-state electronics and with marginal capability against surface targets. The Block 1 upgrade of 1988 offered a number of improvements in the radar, ammunition, rate of fire, increased engagement elevation to +70°, and computing. These improvements were intended to increase the system’s capability against emerging Soviet (soon to become Russian) supersonic anti-ship missiles. The Block 1A standard introduced a new computer system to counter more manoeuvrable targets. The Block 1B PSuM (Phalanx Surface Mode) standard of 1999 added a FLIR (forward-looking infra-red) sensor to allow the weapon to be used against surface targets. This addition was developed to provide ships with a defence against small vessel threats and other ‘floaters’ in littoral waters and to improve the weapon’s performance against slower low-flying aircraft. The FLIR’s capability is also of use against low-observability missiles and can be linked with the RIM-116 Rolling Airframe Missile (RAM) system to increase RAM engagement range and accuracy. The Block 1B standard also allows for an operator to visually identify and target threats. The US Navy is in the process of upgrading its Phalanx systems to the Block 1B configuration, and the same standard is also used by navies such as those of Bahrain, Canada, Egypt, Japan, Portugal and the UK.

The manufacturer also proposed a land-based derivative of the Phalanx system as the General Dynamics High-Value Site Defense System for the local protection of Raytheon MIM-104 Patriot SAM batteries. This HVSDS would use as its structural base the Standard Manufacturing Company’s Trailing Arm Drive hydrostatically-powered 8×8 all-terrain vehicle for a very high degree of battlefield mobility, though a less mobile, and cheaper, alternative would be the trailer used with the Patriot. In each case the base unit would be stabilised by four outriggers before the cannon opened fire. The weapon system would function in exactly the same way as the shipborne system, and provide last-ditch defence against weapons such as guided bombs of both the free-fall and glide varieties and air-to-surface missiles.

Centurion C-RAM
Looking for a solution to rocket and mortar attacks on its bases in Iraq, the US Army in May 2004 issued a requirement for an effective anti-projectile system that could be developed, produced and deployed very rapidly within the context of its C-RAM (Counter-Rocket, Artillery, Mortar) requirement. The result was the Centurion system, which is in effect a version of the CIWS for land use. The system was developed very quickly, with a proof-of-concept test in November undertaken in November of the same year. The Centurion system was deployed to Iraq from 2005, when it was set up for the protection of forward operating bases and other high-value sites in and around Baghdad. Israel bought a single Centurion system for evaluation. It was at one time reported that Israel had considered buying the system to counter rocket attacks and defend point military installations, but instead Israel rapidly developed its own highly effective ‘Iron Dome’ system.

Each Centurion system comprises a modified Phalanx Block 1B CIWS powered by an attached generator and mounted on a trailer for mobility. The unit is capable of firing 4,500 20-mm rounds per minute. In 2008 there were more than 20 such systems protecting bases in the US Central Command’s area of operations. A Raytheon spokesman reported that 105 attacks (mostly by mortars) were defeated by the systems, and as a result of this level of success, 23 more Centurion systems were ordered in September 2008.

Like the naval Block 1B model, the Centurion uses Ku-band radar and FLIR to detect and track incoming projectiles, and is also capable of engaging surface targets, with the system capable of depressing the cannon assembly to -25°. A major difference between the land- and sea-based variants is the choice of ammunition. Whereas naval Phalanx systems fire armour-piercing rounds, the C-RAM uses the HEIT-SD (high explosive incendiary tracer – self destruct) ammunition originally developed for the M163. The round explodes on impact with the target or self-destructs at tracer burn-out, thereby greatly reducing the risk of collateral damage should any round fail to hit its target.