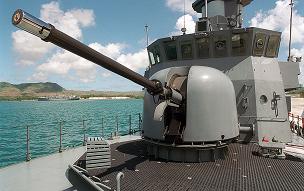 In modern naval warfare, one of the major threats posed to surface vessels of all sizes is the high-speed attack warplane armed with anything between air-to-surface unguided rockets and cannon projectiles at the lower end of the technology spectrum to air-to-surface guided bombs and guided missiles at the upper end. In the middle of the spectrum fall unguided bombs, which are unsophisticated weapons that can nonetheless be deadly when delivered with the aid of a high-quality fire control system. It is the lower- and middle-spectrum weapons that are seen as the greatest threat to smaller warships whose destruction possibly does not warrant the expenditure of a guided weapon.

The Otobreda (originally OTO Melara) 76/62 Compact naval 76-mm (3-in) dual-purpose single gun mounting is one of the most widely used and important equipments of its type in service anywhere in the world, and is a highly effective lightweight weapon designed for minimum volume and operation as a fully automated system against aircraft (fixed- and rotary-wing) and smaller surface attackers such as fast attack craft and corvettes. The origins of the gun lie with the OTO Melara 76/62 MMI Allargato dual-purpose gun produced for the Italian navy. This was designed to use standard US Navy 3-in (76-mm) ammunition, then considered the smallest that could be fitted with a proximity fuse, and was planned as the main armament of corvettes and frigates, and as the secondary armament of destroyers and cruisers. The mounting weighs 12000 kg (26,455 lb) complete with ammunition and associated systems, and is powered by an electro-hydraulic system. This provides traverse through 360° at the rate of 70° per second, and elevation in an arc from -15° to +85° at the rate of 40° per second, both with an acceleration of 70° per second². The magazine accommodates 59 rounds and is located under the splinterproof turret. Rounds are fed automatically to the loading tray, from which they are power-rammed into the gun. This can fire between 55 and 65 rounds per minute under remote or single-man local control.

The MMI was very sophisticated for its time, but by 1963 it was clear that much improvement could be effected to the basic design. This led to the OTO Melara 76/62 Compact, which entered service in 1969 in response to a NATO requirement for an MMI successor with light weight and compact dimensions (so that the weapon could be installed in vessels as small as fast attack craft), a rate of fire of at least 80 rounds per minute; a large ready-use ammunition capacity to allow sustained engagements without the need to replenish the system, high rates of traverse and elevation to enable high-speed targets to be tracked under all weather conditions, and rapid reaction time made possible by an entirely unmanned mounting controlled by a gun captain at a remote monitoring station, and a below-deck ammunition replenishment crew.

The 76/62 Compact thus emerged as a single unit with an under-deck trunk accommodating the 80-round rotating drum magazine and ammunition hoist, and an above-deck gunhouse accommodating the elevating mass, the loading system, the loading tray, the feed drum and the two rocking arms that take ammunition from the hoist and insert them in the feed drum. Rounds are hoisted and loaded in a series of short movements that reduce accelerations to the moving parts and ammunition, and rounds are power-rammed with the ordnance at any angle of elevation and the mounting at any angle of traverse. The mounting is driven by three identical servo motors (one for traverse and two for elevation); of these any one can drive the mounting at reduced speed. Standard traverse and elevation rates are 60° per second and 35° per second, both with an acceleration of 72° per second². Cooling is undertaken with salt water during firing, followed by fresh water flushing after the engagement, and the ordnance has a muzzle brake and a bore extractor.

The key to the 76/62 Compact’s performance is the loading system. As the magazine turns, each round is drawn into the screw feeder hoist that lifts it to a point below the left trunnion, where it is seized by the two rocking arms and carried to the loading drum on the cradle. The drum transfers the round to the vertically-oscillating loading tray operated by the gun’s recoil. As the ordnance recoils the tray is moved up to accept the spent case and the fresh round, and as the ordnance runs out the tray drops down to allow the fresh round to be rammed and the spent case to be ejected forward through the gun shield. The standard 76x900R round fires a 6.3-kg (13.89-lb) projectile with a muzzle velocity of 925 m (3,035 ft) per second. The ammunition types are HE with proximity or point detonating fuses, TP, TP-T and Flash Non-Fragmentation.

In 1984 the company announced the OTO Melara 76/62 Super Rapid, essentially the 76/62 Compact (modified to incorporate mechanical and structural features of the Otomatic land ordnance, which includes titanium rather than steel for many components, and strengthening of the rocker arms and buffering system) and fitted with a local stabilisation system to secure a higher rate of more accurate fire. In the 76/62 Compact the rate can be varied between 10 and 85 rounds per minute by the gun captain, and in the 76/62 Super Rapid the maximum rate is boosted to 120+ rounds per minute, giving this medium-calibre gun almost the fire rate capability of large-calibre cannon, though in this instance with very considerably more devastating projectiles. To match the capabilities of the 76/62 Super Rapid OTO Melara has produced the MOM (Multi-role OTO Munition) round, a multi-role type optimised for the destruction of missiles. The projectile of this round has a body of high-quality steel filled with cubes of tungsten alloy. The projectile is detonated by the FB371 proximity fuse, the powerful bursting charge ensuring that the tungsten alloy cubes are dispersed in a spherical pattern at a high velocity to ensure maximum penetration of the target. The projectile can also be fired with the proximity fuse paralysed, thus operating with its point detonation fuse in a fashion similar to that of the SAPOM (Semi-Armour-Piercing OTO Munition) type with a delay-action fuse. The 76/62 Super Rapid will also be able to fire two new rounds currently under development. The first is a guided projectile designed jointly by OTO Melara and British Aerospace for use against both aircraft and missiles; and the second is an extended-range projectile for use against surface targets.

The mounting has local stabilisation for improved accuracy, and is also fitted with a secondary feed system that permits swift change from automatic fire against aerial targets to semi-automatic fire against surfaces targets and vice versa. Reliability has also been upgraded through the addition of BITE using small computers, and extra safety has been provided by features such as a pointing accuracy check and provision of safety firing arcs.

Features of the 76/62 Super Rapid can be retrofitted to the 76/62 Compact to boost the rate of fire to about 100 rounds per minute. The 76/62 Super Rapid has provision for the incorporation of a stabilised line-of-sight local fire-control system such as the OTO Melara Local Control Unit, a TV-based system with its stabilized tracking head on top of the 76/62’s gunshield; but the types are designed for use primarily with the parent vessel’s main fire-control system, most notably Dutch and Italian systems. The former are mostly variants of the Hollandse Signaalapparaten WM20 series, and the latter the series produced by Elsag, Officine Galileo, OTO Melara and Selenia using a variety of radar and optronic sensors.

The 76/62 Super Rapid has recently been favoured over the French 100-mm (3.93-in) naval gun for the new ‘Horizon’ Franco-Italian class of frigates, and on 27 September 2006 Iran announced that it had started mass production the Fajr-27, which is a reverse-engineered Otobreda 76/62 gun.

Employment (past and present)

Rate of fire: 85 rounds per minute