Operation ‘FV’ was a British naval undertaking between 20 and 30 December 1943 by Admiral Sir Bruce Fraser’s Home Fleet to cover the RA.55A and JW.55B convoys plying from and to ports in the northern part of the USSR, and led to the Battle of the North Cape after the Germans had launched ‘Ostfront’ to destroy these convoys.

On 12 December the JW.55A convoy of 19 laden ships departed Liverpool and reached the Kola Inlet on 20 December and then the White Sea and the port of Arkhangyel’sk on 22 December. The convoy’s local escort between 12 and 15 December comprised the minesweepers Cockatrice and Harrier. The ocean escort from 12 to 15 December comprised the destroyer Westcott, Norwegian corvette Acanthus, and minesweeper Speedwell, which were supplemented between 15 and 21 December by the destroyers Milne, Ashanti, Matchless, Meteor, Musketeer, Opportune, Virago and Canadian Athabaskan. The eastern local escort between 20 and 22 December comprised the Soviet destroyers Gromky, Grozny and Kuybyshev, three Soviet minesweepers and the British minesweepers Hussar and Halcyon. Cover was provided by the heavy cruiser Norfolk and light cruisers Belfast and Sheffield, and distant cover was the responsibility of Admiral Sir Bruce Fraser’s detachment of his own Home Fleet with the battleship Duke of York, light cruiser Jamaica and destroyers Savage, Saumarez, Scorpion and Norwegian Stord; these latter ships, escorted by the Soviet destroyer Kuybyshev, reached the Kola Inlet between 16 and 18 December but then sailed for Akureyri, Iceland, to refuel. Submarine cover off the North Cape was provided by Sirdar and then Syrtis.

In an effort to achieve an interception, U-277, U-354, U-387 and U-636 had been deployed to establish a patrol line east of the Bjørnøya Passage: here U-636 located and for a short time managed to shadow some of the escort vessels during 18 December, but was unable to close on the convoy.

Arctic convoy
The JW.55B convoy of 19 laden ships departed Loch Ewe on 20 December, local escort being provided by the corvettes Borage and Wallflower and minesweepers Hound and Hydra. The convoy was supported by Captain J. A. McCoy’s escort group (destroyers Onslow, Onslaught, Orwell, Scourge, Impulsive and Canadian Haida, Huron and Iroquois) bolstered by the destroyers Whitehall and Wrestler, corvettes Honeysuckle and Oxlip, and minesweeper Gleaner. The convoy was spotted and reported by German air reconnaissance on 22 December, but an attack by Junkers Ju 88 medium-range bombers on the following day was unable to break through the convoy’s anti-aircraft defences. On 25 December the escort was strengthened with the arrival of the destroyers Matchless, Musketeer, Opportune and Virago from the RA.55A’s convoy’s support element. The local escort from 28 December took the form of the Soviet destroyers Razyarenny, Razumny and Kuybyshev, four Soviet minesweepers and the British minesweepers Halcyon, Hussar and Speedwell.

On 24 December U-601 of the ‘Eisenbart’ wolfpack (U-277, U-314, U-354, U-387, U-601, U-716 and U-957) was directed to the convoy by air reconnaissance, and established contact with the JW.55B convoy. But U-601 and U-716, which fired one torpedo at a destroyer, were driven off by the escorts. On 25 December Konteradmiral Erich Bey’s German task force was despatched against the JW.55B and RA.55A convoys in ‘Ostfront’, and this led directly to the Battle of the North Cape and the sinking of Scharnhorst. The JW.55B convoy reached the Kola Inlet without loss on 29 December, and Soviet ships then escorted some of the merchant vessels into the White Sea. The RA.55A convoy reached the UK without loss on 1 January. On 31 December the following RA.55B convoy of eight unladen ships departed the Kola Inlet with local escort by the British minesweepers Halcyon, Hussar and Speedwell, ocean escort by Onslow, Impulsive, Onslaught, Orwell, Whitehall, Wrestler, and Canadian Haida, Huron and Iroquois, and finally the minesweepers Orestes and Ready as the local escort, and reached Loch Ewe on 8 January without loss. 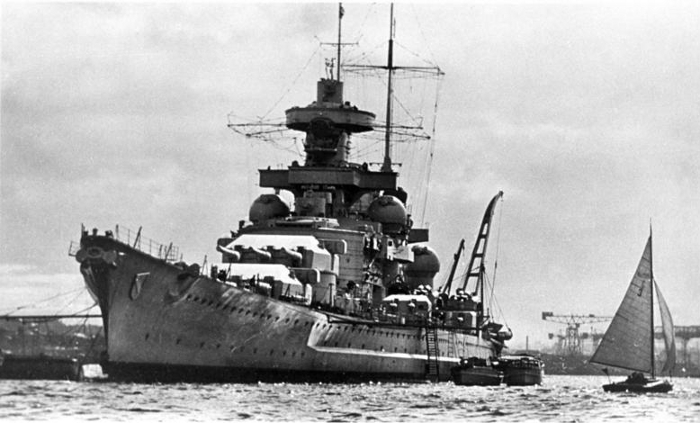 When their aerial reconnaissance reported JW.55B as ‘40 troop transports’, the Germans assumed that a major ‘zone of destiny’ assault on their positions in northern Norway was imminent. This estimate was later revised, the Germans appreciating that the sighting was more probably of a normal Arctic convoy with a strong escort (in fact 14 destroyers). The die was cast on 25 December, when the German naval high command ordered Bey to sea from the Altafjord with the Scharnhorst and five destroyers. A patrol line of eight U-boats was stretched out south from a point west of Bjørnøya mid-way between the Spitsbergen islands and northern Norway, and the Luftwaffe was scouring the area with aircraft.

Converging courses
At the time Fraser and Burnett were informed by the Admiralty that Scharnhorst was at sea, the JW.55B convoy was moving east-north-east just south of Bjørnøya at 04.00 on 26 December, with Fraser’s force steaming north-east some 210 miles (340 km) south-west and Burnett’s force steaming south-west some 150 miles (240 km) east of the convoy, whose safety was Fraser’s primary concern. The German squadron was heading north into a point between the converging courses of the two British forces, and the destroyers were finding it difficult to keep up with Scharnhorst in the deteriorating weather.

In poor weather and heavy seas and with only minimal Luftwaffe reconnaissance to aid him, Bey was unable to locate the convoy and, believing that he had overshot his target and with his destroyers still finding it difficult to keep up with his battle-cruiser in the deteriorating weather, at 07.30 ordered his destroyers to fan out on a search to the south-west. Thereafter Scharnhorst was on her own, and was spotted on Belfast’s radar at 08.40. Anticipating the German attack, Fraser had diverted the convoy away to the north. The unaccompanied Scharnhorst encountered Burnett’s cruisers shortly after 09.00, and was illuminated by starshell at 09.24. Five minutes later, as she turned south, the German battle-cruiser was taken under fire by the three British cruisers at a range of nearly 13,000 yards (11900 m).

While the German ship secured no hits on the cruisers with her 11-in (280-mm) guns, the latter hit the battle-cruiser twice, one shell destroying her radar controls and so leaving Scharnhorst relatively blind in a mounting snowstorm. Without radar, the battle-cruiser’s gunners were forced to aim on the optical basis of the British ships’ muzzle flashes. This was made more difficult because two of the British cruisers were using a new flashless powder. The German vessel hauled round to the north-east once she had distanced herself from the cruisers, and though the cruisers could at first follow this move on radar, in the conditions they could not maintain the same speed as Scharnhorst, so Burnett decided to keep his force between Scharnhorst and the convoy.

No escape
Now outgunned and apparently believing he was in action with a battleship, Bey ordered Scharnhorst to turn south in an attempt to distance himself from the pursuers. The sense of Burnett’s move became clear just after 12.00, when Scharnhorst was again picked up on radar. Both sides opened fire once more, the British cruisers coming off worse but persuading Bey to turn south, where Fraser’s force was awaiting him. As the opposing forces exchanged fire, Scharnhorst made hits on Norfolk, disabling a turret and her radar. Following this exchange, Bey ordered Scharnhorst to follow a southerly course again to try to get around the cruisers and thus back toward the convoy.

After several hours of southerly flight, pursued by Burnett’s cruisers, Scharnhorst was picked up on Duke of York’s radar at 16.17, and at 16.50 the German battle-cruiser was illuminated by starshell from the shadowing Belfast, whereupon Duke of York opened fire at a range of 11,920 yards (10900 m) with her 14-in (356-mm) guns; Jamaica also opened fire. Caught between the fires of Fraser’s and Burnett’s forces, there was no escape for Scharnhorst, especially when the British battleship’s shells plunged into her at long range. Scharnhorst’s ‘A’ turret was almost immediately disabled, and another salvo destroyed the ship’s hangar. Shortly after this, the cruisers Norfolk and Belfast also opened fire. While Bey was able to put some more distance between his vessel and the British ships, at 18.20 his ship’s fortunes took a significant turn for the worse when a shell pierced the armour belt and destroyed a boiler room. Scharnhorst’s speed fell and, now able to maintain only 22 kt, she was vulnerable to the attacks of the British destroyers. Five minutes later, in an increasingly desperate situation, Bey sent his final radio message to the German naval command.

At 18.50, destroyers detached from the RA.55A convoy closed Scharnhorst and obtained one torpedo hit on the battle-cruiser’s starboard side and three more on her port side. Despite this mauling, the battle-cruiser was still able to maintain some 20 kt. The torpedo hits were followed by further successful salvoes from Duke of York and Norfolk, to which Scharnhorst returned fire with her remaining guns, scoring minor hits on a destroyer and near-misses on Duke of York. The British ships now deluged the battle-cruiser with fire, and the cruisers Jamaica and Belfast launched their remaining torpedoes at the slowing target.

Massive pounding
Scharnhorst’s end came when the British destroyers loosed a further 19 torpedoes at the ship. Scharnhorst was turned into a blazing wreck and sank at 19.45, only 36 of her 1,968-man complement being pulled from the freezing Arctic water, 30 by Scorpion and six by Matchless. Neither Bey nor Hintze was among those rescued, although they had both been seen in the water after the ship sank. While the battle-cruiser should have been able to outgun all of her opponents except Duke of York, the early loss of her radar-assisted fire-control system combined with the weather conditions to leave the German ship at a significant disadvantage. However, like other major German surface vessels, Scharnhorst had shown herself to be magnificently designed and superbly built, for her destruction had required at least 13 14-in (356-mm) shell hits, about 12 hits from the cruisers, and 11 hits from the 55 torpedoes fired at her.