Starting with ‘Ringbolt’ and ‘Watchtower’ in August 1942 against the extreme south-east of the Japanese offensive/defensive perimeter at Tulagi and Guadalcanal in the Solomon islands, the US and allied forces had advanced steadily north-westward toward the local administrative and logistical bases of the Japanese forces seeking to isolate Australia from maritime communication with the west coast of the USA. By the end of 1943 formations of the US Marine Corps and US Army, supported by New Zealand elements, had advanced along the chain of the Solomon islands via the Russell islands (‘Cleanslate’), New Georgia (‘Toenails), Vella Lavella (‘Dogeared’), Choiseul (‘Blissful’) and Treasury islands (‘Goodtime’) to Bougainville (‘Cherryblossom’) during their approach to New Britain and New Ireland, where the primary Imperial Japanese army and navy bases had been established at Rabaul and Kavieng. Over the same period US Army and Australian forces had crossed the Owen Stanley mountains in Papua to retake Sanananda and Buna, and then made both land advances and amphibious landings to take Salamaua, Lae and Finschhafen (‘Postern’) in North-East New Guinea and then crossed the Vitiaz and Dampier Straits from New Guinea’s Huon peninsula to secure footholds in western New Britain at Arawe (‘Director’) and Cape Gloucester (‘Backhander’). This effectively prevented the Japanese from reinforcing their army and navy units farther to the west along the northern coast of the huge island of New Guinea.

By this time is had been decided that it would not be worth the matériel and manpower losses that would result from any attempt to reduce the Japanese base areas centred on Rabaul and Kavieng, which were now to be isolated and their garrisons left to ‘wither on the vine’. The vice was to be closed on Rabaul and Kavieng by the seizure of the Admiralty islands and St Matthias islands, some 200 miles (320 km) to the north of New Guinea and to the west of New Ireland, in ‘Brewer’ and ‘Beefsteak’. The Admiralty islands had been occupied from 7/8 April 1942 by the 51st Transport Regiment of Lieutenant General Hidemitsu Nakano’s 51st Division, detached from Lieutenant General Thrashing Sakai’s 23rd Army in China. The Japanese saw in Seeadler Harbour, in the fishhook-shaped bay formed by Manus and Los Negros islands, an ideal forward fleet base, and from a time late in 1943 strengthened Colonel Yoshio Ezaki’s garrison with elements of the 14th Naval Base Force as well as the 2/1st Independent Mixed Regiment and 1/229th Regiment.

‘Brewer’ was one of the two final offensives of the ‘Elkton’ plan to trap General Hitoshi Imamura’s 8th Area Army in New Britain and New Ireland. The schedule adopted by General Douglas MacArthur’s South-West Pacific Area command called for an invasion of the Admiralty islands in May 1944, but in January the pilots of aircraft attacking targets in these islands reported that there was virtually no evidence of any Japanese presence. Lieutenant General George C. Kenney’s 5th AAF thought that the invasion should be brought forward to give the US forces use of the airfield on Manus island to help complete the isolation of the Japanese on New Britain and New Ireland, and also to support further Allied movement to the north-west along the coast of New Guinea. The scheme was opposed by Brigadier General Charles A. Willoughby, MacArthur’s intelligence chief, on the grounds that they were in fact 4,000 Japanese troops on the islands. MacArthur decided to take the gamble using Lieutenant General Walter C. Krueger’s ‘Alamo’ Force (6th Army), and the operation was prepared in very short order under Vice Admiral Thomas C. Kinkaid’s 7th Amphibious Force, which extemporised an attack force under Rear Admiral William M. Fechteler.

The operation began on 29 February 1944 as a reconnaissance in force of Los Negros island, just to the east of the somewhat larger Manus island, by a 1,000-man detachment of Brigadier General William C. Chase’s 1st Cavalry Brigade of Major General Innis P. Swift’s 1st Cavalry Division with the support of aircraft of the RAAF’s No. 73 Wing. Ezaki had deployed most of his defence (51st Transport Regiment, 2/1st Independent Mixed Regiment, and elements of the 14th Naval Base Force) to protect Seeadler Harbour, but even so the Americans were able to land against negligible opposition in Hyane Harbour on the other side of Los Negros, and within two hours had captured Momote airfield. 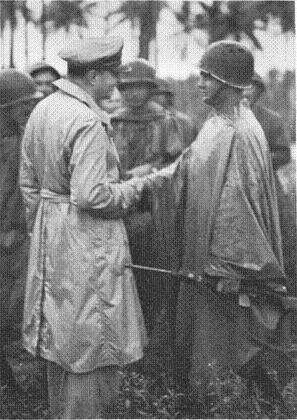 Fechteler’s Task Force 76 had set out on 27 February with Captain Jesse H. Carter’s Task Group 76.3, comprising the destroyers Drayton, Reid, Flusser, Mahan, Smith, Bush, Welles, Stevenson and Stockton, escorting TG76.2, comprising Humphreys, Brooks and Sands, which were older destroyers adapted as APD high-speed troop transports, to land 1,026 troops of the 5th Cavalry Regiment in Hyane Harbour. Fire support was provided by Rear Admiral Russell S. Berkey’s TG74.2, comprising the light cruisers Phoenix (with MacArthur and Kinkaid on board) and Nashville, and destroyers Daly, Hutchins, Bache and Beale. During the evening the ships withdraw, and MacArthur decided that the situation was ripe for exploitation. As the necessary reinforcements were assembled, Chase pulled his men back into a well defended perimeter and fought off determined counterattacks during the next 48 hours. Bush and Stockton provided gunfire support for the landed troops in the face of strong counterattacks during the night 29 February/1 March. US reinforcements (1,500 more cavalrymen and 400 naval construction engineers) arrived on 2 March as the first part of a process increasing the US presence to two divisions (Major General William H. Rupertus’s 1st Marine Division and the 1st Cavalry Division, the latter including Brigadier General Verne D. Mudge’s 2nd Cavalry Brigade). The troops of the reinforcement landing were transported in and landed from 12 landing ships (six LSTs and six LSMs) accompanied by Captain Dechaineux’s destroyers Ammen, Mullany and Australian Warramunga, and minesweeper Hamilton. The embarked troops were able to land with support from the destroyers Bush, Stockton and Welles, and destroyer minesweeper Long.

Because the destroyers could not silence the Japanese batteries to the north of Seeadler Harbour, Rear Admiral V. A. C. Crutchley’s TF74, comprising the Australian heavy cruiser Shropshire, US light cruisers Nashville and Phoenix, and US destroyers Daly, Hutchins, Bache and Beale, bombarded the islands of Hauwei and Norilo on 4 March. On 5 March a third wave of 1,410 troops arrived with TG76.1, comprising the destroyers Flusser, Drayton, Smith, Wilkes, Swanson, Nicholson, Stevenson, Thorn and Australian Arunta, and APDs Humphreys, Brooks and Sands. On 6 March Nicholson was damaged by the still unsilenced batteries at the entrance of Seeadler Bay, and TF74’s ships again shelled the islands on 7 March, raining a total of 64 8-in (203-mm), 1,144 6- and 5-in (152-and 127-mm) and 92 4-in (102-mm) shell onto the Japanese positions.

On 9 March the new airfield at Lorengau was declared safe. On 12 March there arrived a fourth convoy, this comprising six LSTs and the destroyers Flusser, Reid, Kalk, Gillespie, Hobby and Warramunga. By 30 March the islands off Seeadler Harbour had been occupied in the face of resistance, often very determined, by the Japanese defence under Ezaki. By 25 March Los Negros and Manus islands had been taken, so closing the Japanese escape route to the east-north-east. Manus was declared secure only on 18 May after an operation which had cost the 1st Cavalry Division 1,515 casualties (326 killed and 1,189 wounded).

The route toward other Japanese positions was closed on 20 March when Major General Harry Schmidt’s 4th Marine Division landed unopposed on Emirau and Mussau islands in the St Matthias islands in ‘Beefsteak’, effectively trapping the 8th Area Army on New Ireland and the eastern end of New Britain, and Lieutenant General Harukichi Hyakutake’s 17th Army on Bougainville farther down the chain of the Solomon islands, where it was hotly engaged with Major General Oscar W. Griswold’s US XIII Corps.

To close the ring around the main Japanese base areas of Rabaul and Kavieng, already partially enclosed by a series of operations including ‘Cherryblossom’ (Bougainville), ‘Squarepeg’ (Green island), ‘Postern’ (Salamaua, Lae and Finschhafen), ‘Dexterity’ on North-East New Guinea, ‘Backhander’, ‘Director’ and ‘Appease’ (Talasea on New Britain) and ‘Brewer’, the Allies decided in February 1944 that Emirau island should be taken as the means of sealing the approaches to Kavieng in the north-west and north from the direction of the Caroline islands, which large Japanese air, land and sea forces were based. The occupation of Emirau island was preferred to a direct assault of Kavieng, which was subsequently cancelled. The Allied presence on Emirau island would, in the longer term, provide a base from which to patrol the Ysabel Channel and so keep watch on Kavieng and the approaches to it and also, in the shorter term at least, provide a flank guard for ‘Brewer’ that was still proceeding on the Admiralty islands.

The landing force arrived off Emirau island’s south-eastern end at dawn on 20 March in 19 destroyers and landing craft, and started to land four battalion landing teams. The 1 and 2/4th Marines landed unopposed on two beaches on the island’s south-eastern end as well as on nearby Elomusad islet. The island was swept, found unoccupied by the Japanese and, after all 3,727 men had landed, was declared secure by the fall of night. As the landing took place a battleship force shelled Kavieng and nearby airfields to give the Japanese the impression that a landing on New Ireland island was about to take place. On 23 March the Japanese navy seaplane base on Eloaue islet was shelled by destroyers. The garrison fled toward Kavieng in two large native canoes, one of which was detected and destroyed on the following day. ‘Seabee’ construction battalions arrived on Emirau island within days, and began work on the construction on two airfields and small naval base.

The 4th Marines were relieved by the 147th Infantry on 11 April. A PT-boat base was established on Eanusau Islet and operated patrols off New Ireland. Two bomber airfields, each with a 7,000-ft (2135-m) runway, were built at Inshore and North Cape. With Rabaul and Kavieng neutralised and left to ‘wither on the vine’, Emirau island declined in importance from December 1944, and the base was closed in March 1945.

‘Brewer’ itself could have been a disaster if the Japanese defence had been facing Hyane Harbour, but the success of MacArthur’s gamble had important longer-term implications. At this time the Joint Strategic Survey Committee was advocating that ‘the primary effort against Japan be made from the east across the central Pacific, with a view to the early seizure of the Formosa, Luzon, China coast area as a base to attack Japan’, and that the South-West Pacific Area should support the primary effort with whatever resources could be spared for it. Strategic thinking in Washington began to change after the success of ‘Brewer’, and MacArthur capitalised on this fact by proposing a few days later that his forces should bypass Hansa Bay, scheduled for attack in late April 1944, and instead made the 580-mile (935-km) jump straight to Hollandia, this ‘Reckless’ operation isolating 40,000 Japanese troops along the coast of New Guinea. The proposal was part of the far-reaching ‘Reno IV’ scheme which MacArthur submitted to Washington in early March 1944 through his chief-of-staff, Lieutenant General Richard K. Sutherland. This plan called for the South-West Pacific Area command to retain control of many of the resources of Admiral William F. Halsey’s South Pacific Area command, which was about to wind up its operations, and also enjoy the support of some of Admiral Chester W. Nimitz’s Central Pacific Area carrier task forces for the object of returning to Luzon in the Philippine islands by January 1945. Nimitz objected that this would destroy the impetus of his central Pacific offensive, but the Joint Chiefs-of-Staff on 12 March issued a directive ordering MacArthur to press ahead along the northern coast of New Guinea to the Vogelkop peninsula in preparation for an invasion of Mindanao in the Philippine islands during November 1944, and Nimitz to neutralise Truk in the centre of the Caroline islands, capture the Mariana islands in mid-June, and seize the Palau islands in mid-September to provide a base only 600 miles (965 km) to the east of Mindanao.