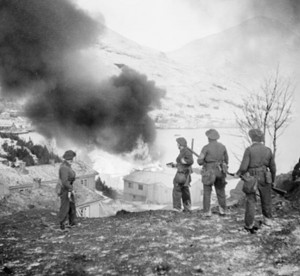 Military operations in World War II did not pause for any Christmas and New Year break, and 69 years ago, during December 1941, the British launched a pair of classic special forces operations against two of the German garrison forces in occupied Norway. The first of these was Operation ‘Anklet’ of 26/28 December, which was undertaken as a diversion for the larger Operation ‘Archery’ of 27 December/1 January. The target for ‘Anklet’ was the Lofoten islands, which lie off the Norwegian coast about 100 miles (160 km) to the north of the Arctic Circle. In appearance and size these resemble the Outer Hebrides off the north-west coast of Scotland. They were selected by Combined Operations HQ as a relative safe diversionary target to coincide with the primary operation some 300 miles (480 km) farther to the south between Trondheim and Bergen. Since Operation ‘Claymore’, the first commando raid on the Lofoten islands on 4 March 1941, the German forces in Norway had been considerably strengthened and allocated many more warplanes. Prime Minister Winston Churchill was enthusiastic in his conviction that feints and major raids were now a militarily legitimate tactic to divert the attention and confuse the minds of the German high command so that it would come to believe that Norway was a serious British (and later Allied) option for the launch of an invasion of mainland Europe from the UK. This would persuade the Germans in general, and Adolf Hitler in particular, that Norway was a ‘zone of destiny’ and had therefore to be garrisoned by sizeable forces which, Churchill rightly believed, would thus be unavailable for deployment elsewhere.

Operation ‘Anklet’ involved some 300 men of Lieutenant Colonel S. S. Harrison’s No. 12 Commando, as well as a number of Free Norwegian troops, against German and other installations on the Lofoten islands in the Vestfjord region. The raid was planned by Commodore Lord Louis Mountbatten’s Combined Operations HQ as the diversionary component of a two-pronged operation whose primary component was ‘Archery’ against the island of Vågsøy (Vaagsö) farther to the south, and was intended to capitalise on the growing strength, expertise and success of the commando forces during 1941. The intention was that ‘Anklet’ should be mounted with ‘Archery’ as a subsidiary thrust to divert German attention to the northern region just before the descent of the main force, but in the event poor weather delayed the start of ‘Archery’ to 27 December. Command of the operation was entrusted to Rear Admiral L. H. K. Hamilton in the light cruiser Arethusa, which with the destroyers Somali, Ashanti, Bedouin and Eskimo, escort destroyers Wheatland, Lamerton and Polish Krakowiak and Kujawiak, Norwegian corvettes Eglantine and Acanthus, minesweepers Speedwell, Harrier and Halcyon, escorted two assault ships. These last were the converted cross-Channel ferries Princess J. Charlotte and Prince Albert. There were also the tankers Black Ranger and Grey Ranger, the rescue ships Scott and Danish Gudrun Maersk, the tug Jaunty, and for navigational support the submarine Sealion. The force departed Scapa Flow on 22 December, but four days later Princess J. Charlotte had to return to Scapa Flow with engine trouble, escorted by Wheatland, forcing Hamilton to scale down the basic plan. 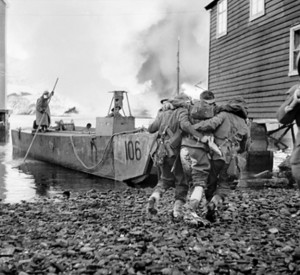 The commandos landed at 06.00 on 26 December, the planners having scheduled the raid in the expectation that the German garrison would be caught off guard after the Christmas festivities of the day before. The landings were unopposed as the men entered two harbours on the westerly island of Moskenesøya. The towns of Reine and Moskenes were soon occupied, and a small number of German prisoners and Quislings (pro-German Norwegians) were captured, this number including those manning the wireless station at Glåpen. A large supply of French chocolates and cigarettes was found and distributed to the members of the area’s Norwegian population, who expressed their concern about reprisals and wished the British forces to remain. Hamilton was tempted to consider a prolonged stay as there is no sun in these latitudes between 10 December and 3 January, so the risk of German air attack was much reduced. However, a bomb dropped by a German seaplane on 27 December fell close to Arethusa, which had penetrated into the Vestfjord in company with Ashanti, Eskimo and Somali in search of German shipping, and in combination with intelligence reports that German fighter and bomber forces were moving north to deal with his force, which was operating beyond the range of fighter cover from the UK, this persuaded Hamilton to withdraw. The force reached British waters again on 1 January 1942. Two German radio transmitters had been demolished, two German-manned Norwegian coasting vessels (1,125-ton Kong Harald and 745-ton Nordland) captured, the German patrol boat Geier sunk by Ashanti, and a few Germans and Quislings taken prisoner. The raid had therefore served its purpose, largely in disrupting German inshore sea communications in the area, but was the last of its type undertaken without air support.

Operation ‘Archery’ was a more ambitious undertaking by elements of Nos 2, 3, 4 and 6 Commandos, as well as other forces, against German positions and other installations on Vågsøy (Vaagsö) and Måløy (Maaloy) islands off the Norwegian coast just to the south of the Stadlandet headland. Like ‘Anklet’, ‘Archery’ was delayed by poor weather and started one day later than ‘Anklet’. The operation was commanded by Rear Admiral H. M. Burrough in the cruiser Kenya, which with the destroyers Offa, Onslow and Oribi, escort destroyer Chiddingfold and submarine Tuna (the last as the force navigational check) escorted the assault ships Prince Charles and Prince Leopold carrying Brigadier J. Haydon’s landing forces. In conjunction with a UK-launched bombing attack, the warships silenced the coastal batteries on Vaagsö and allowed the troops to get ashore without difficulty for the destruction of German facilities. The operation was undertaken by No. 3 Commando, two troops of No. 2 Commando, a medical detachment of No. 4 Commando, a demolition party from 101 Troop (Canoe) of No. 6 Commando and a dozen Norwegians from the Norwegian Independent Company under Captain Martin Linge. The 570 commandos were divided into five parties with the objectives of securing the area to the north of the town of South Vaagsö (Måløy) and engaging any German reinforcements on the western side of the Ulversund after being landed from Oribi (Group 5); subduing and securing South Vaagsö town (Group 2); eliminating the Germans on Måløy island (Moldøen) dominating the town of South Vaagsö (Group 3); eliminating the German strongpoint at Hollevik (Holvik) south of South Vaagsö (Group 1); and providing a floating reserve offshore in Kenya (Group 4). The operation’s primary task was the destruction of fish oil production and stores, which the Germans used in the manufacture of high explosives. Another intention was to cause the Germans to maintain and increase their forces in Norway which might otherwise have been deployed to the Eastern Front. 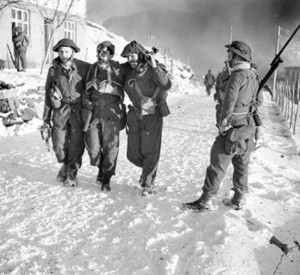 The landing was made at daybreak, with a naval gunfire bombardment just before this, and the attainment of the objectives went generally to plan except in the town of South Vaagsö, where the German opposition, provided by most of the 150-man garrison of Generalleutnant Kurt Woytasch’s 181st Infantry Division, was considerably stronger than had been expected as, unknown to the British, some 50 experienced Jäger (light infantry) troops from the Eastern Front were present on leave. Despite being taken by surprise, the Germans rallied quickly and started to fight back. Three of the four coastal guns on Måløy were knocked out, and on this small island the fighting was over in 20 minutes as a result, in part, of the accuracy and precise timing of the naval support. Kenya’s bombardment lifted when the 105 men of Group 3 were just 50 yards (45 m) from the beach, and the Germans had only just begun to lift their heads before the commandos overran them. However, in this part of the action Linge was killed. The German survivors were rounded up, the demolition work was completed, and the party crossed the short stretch of water to join the fierce house-to-house fighting in South Vaagsö. Meantime the force at Hollevik faced a weaker resistance than had been expected as eight men of the defence force were in South Vaagsö having breakfast. Thus the commandos of Group 1 were soon able to reinforce those of Group 2 in the South Vaagsö engagement. The floating reserve of Group 4 was also committed as the German resistance was greater than expected.

Meanwhile the commandos of Group 5 had been transported farther up the fjord past Måløy island into the Ulversund by the destroyer Oribi, which was accompanied by Onslow. Oribi landed the commandos of Group 5 without opposition, and these men then cratered the road with explosives to prevent reinforcements from getting through from North Vaagsö. They also destroyed the telephone exchange at Rodberg. It was in the Ulversund that the British spotted a number of merchant ships as well as an armed trawler. Those under power beached themselves, and the armed trawler Föhn (used as a patrol vessel) and 2,935-ton freighter Reimar Edzard Fritzen were boarded despite sniper fire from the shore in the hope of finding confidential papers and secret code books. It was at about this time that two Messerschmitt Bf 109 fighters and two Junkers Ju 88 medium bombers were active in the area. The men of Group 5 later joined the fighting in South Vaagsö. In the fighting for this last, the British commander on the spot, Lieutenant Colonel John Durnford-Slater, had already summoned the floating reserve and troops from Måløy island. A number of the town’s inhabitants aided the commandos by bringing up ammunition, grenades and explosives, and moving the wounded back to the landing craft. After destroying four factories, fish-oil stores, ammunition and fuel stores, the telephone exchange and various military installations, the commandos started to pull back at about 14.00, leaving much of the town ablaze. The naval force had meanwhile sunk eight vessels: in Maalöysund Onslow and Oribi sank Föhn and Reimar Edzard Fritzen, as already noted, and also the 2,258-ton freighter Norma, 1,003-ton freighter Eismeer and, somewhat later, the beached 1,712-ton freighter Anita L. M. Russ. Off Vaagsö Offa and Chiddingfold sank the patrol boat Donner and the 5,870-ton freighter Anhalt; the British forces also sank a tug. It was not all one-way traffic, however, for Kenya took several hits from the coastal battery at Rugsundöy.

At 13.45 Durnford-Slater ordered the withdrawal from South Vaagsö. The British force re-embarked at 14.45 as the short Arctic day drew to a close, and the British ships immediately started to move away from the islands.

Attacks by German aircraft on 27 and 28 December were unsuccessful. No British ships were lost, but the Royal Navy had four men killed and another four wounded. The commandos suffered 17 killed and 53 wounded, Linge was killed, and RAF Coastal Command lost 31 men killed and 11 of the aircraft (two Handley-Page Hampden, seven Bristol Blenheim and two Bristol Beaufighter warplanes) it had deployed over the area from bases in northern Scotland. The commandos killed at least 120 German military personnel, and returned with 98 prisoners as well as a complete copy of a current German naval code book. Four Quislings and 77 Norwegian volunteers were also brought back.

The raid was enough to persuade Hitler to make a rapid diversion of 30,000 troops to Norway, order an improvement in the region’s coastal and inland defences, and send the battleship Tirpitz, battle-cruisers Gneisenau and Scharnhorst, pocket battleship Lützow, and heavy cruisers Admiral Hipper and Prinz Eugen to Norway. This constituted a major diversion of effort and forces which could have had significant impact elsewhere, and confirmed that Hitler believed that the British might be planning an invasion of northern Norway as a means of exerting pressure on Sweden and Finland to turn against Germany.