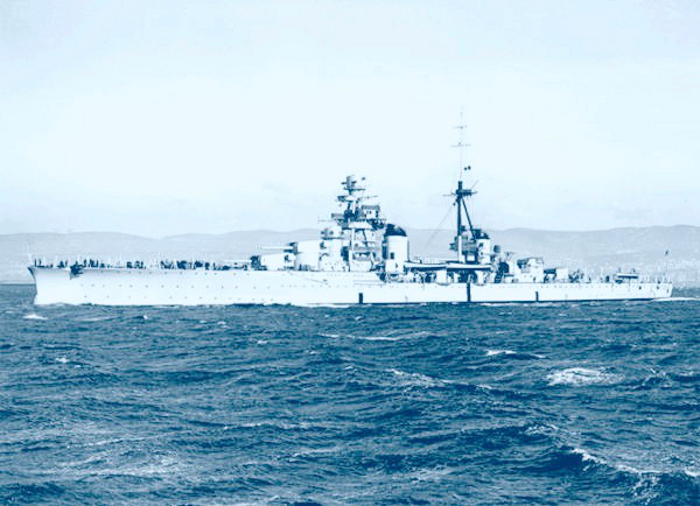 Significant but limited escort force
The close escort comprised the destroyers Fortune, Griffin and Hotspur of the 2nd Destroyer Flotilla, the ‘Hunt’ class escort destroyers Dulverton, Exmoor, Croome, Eridge, Airedale, Beaufort, Hurworth, Tetcott and Aldenham of the 5th Destroyer Flotilla, the corvettes Delphinium, Primula, Erica and Snapdragon, minesweepers Boston and Seaham, and the old battleship Centurion to serve as an air attack decoy; there were also the rescue ships Antwerp and Malines. More distant cover was provided by the 15th Cruiser Squadron with the anti-aircraft cruisers Cleopatra, Dido, Euryalus and Hermione, and the 4th Cruiser Squadron with the light cruisers Arethusa, Birmingham and Newcastle), and 14 destroyers (7th Destroyer Flotilla with Napier, Nestor, Nizam and Australian Norman, 14th Destroyer Flotilla with Jervis, Kelvin and Javelin, 12th Destroyer Flotilla with Pakenham, Paladin and Inconstant, and 22nd Destroyer Flotilla with Sikh, Zulu, Hasty and Hero). Four of the freighters left harbour with motor torpedo boats in tow for release at sea and when required for short-range torpedo attacks on any Italian warships which attempted to intervene. In the event the MTBs had to turn back to Alexandria because of stormy weather, MTB-259 foundering before it reached port. The British submarines Proteus, Thorn, Taku, Thrasher, Porpoise, Una, P31, P34 and P35 were patrolling off Taranto and south of the Strait of Messina, while P42, P43, P46 and P211 were operating between Sicily and Sardinia. Four of the cruisers and 10 of the destroyers were ‘on loan’ to the Mediterranean Fleet from the Eastern Fleet for this operation.

All too evident, however, was the lack of any heavy ships to deal with an Italian battle fleet interception should such an event materialise, or of any aircraft carriers to deal with Axis reconnaissance or attack aircraft. The old battleship Centurion (now used mainly as a radio-controlled target and fitted only with anti-aircraft weapons) was allocated in the hope that the Axis forces would be deceived into thinking that there was a fully armed battleship among the escort force. The rationale for the inclusion of Centurion was that she was crudely disguised as a unit of the ‘King George V’ class, her pre-World War I armour might afford her a better chance of survival than a merchant ship, carried 2,000 tons of supplies, and was both available and expendable. Greater reliance was placed on the substantial force of attack aircraft and submarines provided for ‘Vigorous’. These should have been more than adequate for the task, but the British lacked sufficient numbers of reconnaissance aircraft with the requisite range, and these attack forces were thus denied the accurate intelligence which would have enabled them to operate effectively against the Italian surface forces. Harwood and Air Chief Marshal Sir Arthur Tedder, the air commander, personally supervised the operation from the headquarters of Air Vice Marshal L. H. Slatter’s naval co-operation No. 201 Group.

The ‘Vigorous’ operation got under way on 11 June with the sailing from Port Said of the MW.11C diversionary group (the merchantmen Aagtekirk, Bhutan, City of Calcutta and Rembrandt, cruiser Coventry and eight destroyers) in ‘Rembrandt’ intended to sail as far east as Tobruk before turning back to meet the main convoy. The British hoped that the Italian naval forces would be decoyed south by the diversionary group, then fail to find it and have to turn back for lack of fuel, so leaving the main convoy the chance to make good progress without Axis interference.

Two starting points
The main convoy assembled in two parts (MW.11B at Alexandria with the tankers Bulkoil and Potaro escorted by the destroyers Fortune, Pakenham and Paladin, and MW.11A at Haifa with the merchant vessels Ajax, City of Edinburgh, City of Lincoln, City of Pretoria and Elizabeth Bakke escorted by the destroyers Hotspur, Inconstant, Napier, Nestor, Nizam and Norman) and joined the diversionary convoy off Alexandria on 13 June, the whole convoy then moving east to be joined off Tobruk by Vian’s escort of seven cruisers and 17 destroyers.

The escorting forces were the cruisers Arethusa, Birmingham, Cleopatra, Dido, Euryalus, Hermione and Newcastle, escort destroyers Hurworth and Tetcott of the AA-capable ‘Hunt’ class, and the fleet destroyers Griffin, Hasty, Hero, Javelin, Jervis, Kelvin, Sikh and Zulu, few of which had any great AA capability. Additionally, there sailed the corvettes Delphinium, Erica, Primula and Snapdragon and minesweepers Boston and Seaham. The miscellaneous collection was completed by four motor torpedo boats, the rescue ships Antwerp and Malines, and the disarmed battleship Centurion. The combined convoy was intended for a mean speed of 13 kt, an overly optimistic estimate as became clear quite early in the operation. The MW.11C convoy sailed ahead of the other two sections, on 11 June and as ordered proceeded as far west as Tobruk before turning back to join the other two sections. The plan was that this sortie, ostensibly to supply Tobruk, would lure the Italian fleet out of its bases, expose it to attack and cause it to use its fuel supplies, but the ruse did not succeed. Escorted by the anti-aircraft cruiser Coventry and escort destroyers Airedale, Aldenham, Beaufort, Croome, Dulverton, Eridge and Hurworth, which were joined off Alexandria by Exmoor, the convoy had just turned to return to the rendezvous on the evening of 12 June when it was attacked by dive-bombers. City of Calcutta was damaged and had to be detached to Tobruk with Croome and Exmoor.

Convoy concentration
The remaining ships returned east and rendezvoused with the balance of the convoy on 13 June, when the escort destroyers were sent back to Alexandria to fuel. Of the remainder of the convoy, Elizabeth Bakke proved too slow and was ordered back to Alexandria, so it was only nine ships and Centurion which moved on toward Malta. Axis aircraft kept track of the convoy through the night of 13/14 June, and heavy attacks were launched during 14 June despite the attentions of British land-based fighters. During the night of 13 June the escort was also depleted as the weather proved too rough for the motor torpedo boats, which were being towed by merchant ships and were now ordered to return, and the three surviving boats reached Alexandria on 14 June. The corvette Erica also developed defects and left the convoy, while Aagtekirk proved too slow and was sent in to Tobruk, escorted by Tetcott and Primula, on 14 June. Aagtekirk was attacked by 40 German dive-bombers and sank off the port.

Farther out to sea, the main escort joined the convoy, and the two destroyers which had taken in City of Calcutta rejoined the convoy’s escort. During the afternoon of 14 June an air attack sank Bhutan and damaged Potaro, which was nonetheless able to continue with the convoy. The two rescue ships picked up Bhutan’s survivors and then headed for Tobruk. A submarine-fired torpedo almost hit Pakenham, and from a time shortly after sunset Italian torpedo craft tracked the convoy before attacking at midnight but being driven off.

Aware that reconnaissance suggested a meeting with the Italian fleet at dawn, Vian appreciated that he stood no chance of repeating the action of Sirte over a period of 14 hours in good weather, and turned east at 01.45 to delay the interception. During the turn Newcastle and other ships became separated from the convoy and, in a subsequent Italian torpedo craft attack, Newcastle was damaged and destroyer Hasty was sunk by a torpedo from the submarine S.55. At dawn the Italian fleet was some 200 miles (320 km) north of the convoy, and Vian was once again ordered to make for Malta while Allied aircraft struck at the Italians. The first blood was drawn by Malta-based aircraft, which torpedoed and crippled the heavy cruiser Trento, which was later sunk by the submarine Umbra. The British submarines were meanwhile struggling to intercept the Italians, and an Egypt-launched air raid developed between 09.00 and 10.00, scoring one bomb and one torpedo hit on Littorio. Virtual chaos now ensued in the British camp, for at 09.40 Harwood ordered Vian to turn back once again then at 12.00, having heard the optimistic air reports of damage to the Italian squadron, told Vian to make once more for Malta, and finally at 12.45, having heard that the air reports were too hopeful and that air reconnaissance had lost touch with the Italian squadron, left the matter to Vian. The latter received this signal only at 14.20 after the cruiser Birmingham had been badly damaged in an air attack, which put part of her armament out of action, and the destroyer Airedale crippled. The destroyer had to be sunk by the surviving British forces, so only a much reduced escort was available for the convoy of six merchantmen, another having been sent back as a straggler. At about 18.00 Nestor was hit, taken in tow by Javelin and, with Beaufort and Eridge as a screen, set off toward Alexandria. 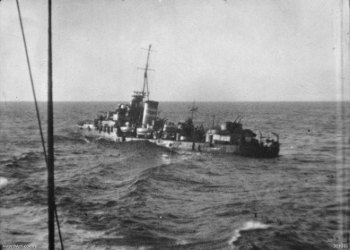 Back and forth
Harwood then received firm information that the Italian fleet was retiring and accordingly ordered the convoy to turn once again for Malta. Unfortunately, the order was received at the peak of a heavy air attack, and it was nearly 19.00 before the situation could be assessed and fuel and ammunition reserves ascertained. With Nestor damaged in the latest raid, fuel in the destroyers low, and less than 30% of ammunition remaining, it was clear that to press on to Malta was impossible. Harwood concurred at 19.39, and the whole convoy headed back for Alexandria. During the night the cruiser Hermione was hit by a torpedo from Kapitänleutnant Franz-Georg Reschke’s U-205 and sank, the damaged Nestor also had to be sunk, and the bedraggled convoy and escort returned to Alexandria and Port Said on the evening of 17 June. Ajax and Bulkoil were escorted to Port Said by Fortune, Griffin, Inconstant and Pakenham, and the other merchant ships entered Alexandria. Centurion, damaged and with a deep draught, had to anchor outside the Great Pass.

One cruiser, three destroyers and two merchantmen had been lost, and ‘Vigorous’ could only be regarded as a severe tactical defeat for the British. So ended the British attempts to supply Malta by convoy from the east until such time as the British 8th Army had succeeded in clearing the Axis forces from North Africa, and so provided the RAF with the bases from which it could provide air cover during convoy passages though the eastern Mediterranean.