This was the Japanese offensive against Imphal and Kohima in north-east India by Lieutenant General Renya Mutaguchi’s 15th Army between 7 March and 22 June 1944) Planned by Mutaguchi under the supervision of General Masamitsu Kawabe’s Burma Area Army, which had been created on 18 March 1943 to control the Japanese armies in Burma, ‘U’ was an extremely bold attempt to spoil the Allied offensive which was clearly imminent as an advance over the Chindwin river toward Mandalay. ‘U’ involved the 15th Army in an all-out drive to seize the Manipur plain, in which are situated Imphal and Kohima as the only logical jumping-off points for the Allied offensive, and so cut the Allied lines of communication with northern Assam, the supply base for Lieutenant General Sir William Slim’s British 14th Army and for the Chinese and American forces commanded in north Burma and south-west China by Lieutenant General Joseph W. Stilwell.

Thus the 33rd and 15th Divisions would tackle Imphal (the 33rd Division having most of the army’s distinctly limited armour and also its heavier artillery), while the 31st Division was tasked with the elimination of Kohima (and its 4,000-ft/1220-m pass on the road from Dimapur to Imphal) in the north so that Allied reinforcements could not intervene in the major battle around Imphal.

Impossible timetable
Mutaguchi expected that his 15th Army could complete ‘U’ in some three weeks, after which the army could be supplied from captured British stocks until a road had been driven through from Kalewa to Imphal via Palel just north of the Shenam Saddle. The Japanese thus carried supplies of food, ammunition and fuel for only three weeks. But Kawabe was already starting to have doubts about the practicality of ‘U’, and the same sentiments were expressed by Lieutenant General Noburo Tazoe, commanding the much depleted 5th Air Division that was intended to provide air support for the 15th Army.

Slim’s misappreciation
The 14th Army appreciated that the tactical situation in central Burma made it possible for the Japanese to attempt a long-range infiltration campaign, but Slim incorrectly estimated that the Japanese could deploy only two regiments in such an effort, and therefore raised no objection when ‘Thursday’ was committed on 5/6 March to deliver Major General O. C. Wingate’s Indian 3rd Division for the second Chindit expedition. However, contingency plans for a Japanese offensive were in existence, Scoones intending to pull the 17th Light Division and 20th Division back to the Imphal plain, where they could be reinforced with Major General H. R. Briggs’s Indian 5th Division and Brigadier M. R. J. Hope-Thompson’s Indian 50th Parachute Brigade flown in from the Arakan front. Scoones could then use this concentrated force with armour and overwhelming air support to crush any Japanese offensive.

As the Imphal plain was being prepared as the base area for ‘Capital’ there were large numbers of non-combatants in the area, and Slim planned in ‘Stamina’ to fly out these 40,000 men in the aircraft bringing in the 5th Division and 50th Parachute Brigade. The stage was thus set for the climactic battles of ‘U’, which pitted some 120,000 Allied soldiers (nine British, 16 Gurkha and 24 Indian infantry battalions, plus 120 tanks) against slightly fewer than 90,000 Japanese (26 infantry battalions) supported by about 7,000 Indian collaborators of Subhas Chandra Bose’s Indian National Army, whose 1st Division was allocated to the 15th and 31st Divisions. But while the Japanese could call on no reinforcements (excluding some 4,000 men included in the Japanese total above), Scoones could call on Lieutenant General M. G. N Stopford’s Indian XXXIII Corps, which was much reinforced during the campaign and eventually comprised Major General J. M. L. Grover’s British 2nd Division, Major General F. W. Messervy’s Indian 7th Division, Brigadier L. E. C. M. Perowne’s Indian 23rd Brigade (from the Indian 3rd Division), Brigadier N. I. Nonweiler’s 3rd Special Service Brigade and Brigadier P. C. Marindin’s Lushai Brigade, in all some 75,000 men (three Gurkha, 11 Indian and 20 British battalions) plus the armour of the 149th Regiment, Royal Armoured Corps. 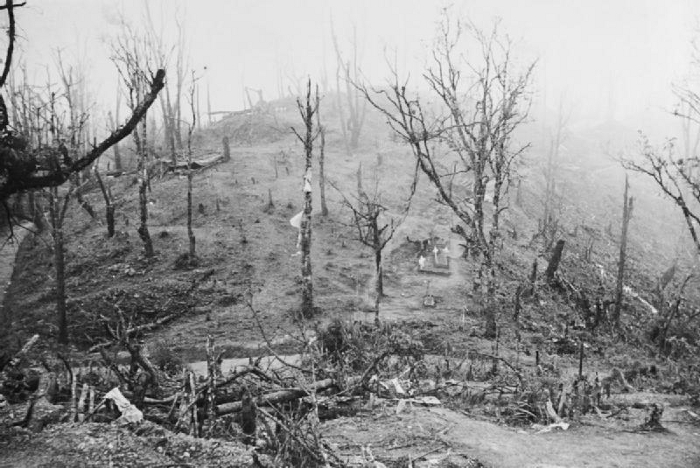 The 31st Division cut off Kohima on 4 April, and Imphal was invested by the 15th and 33rd Divisions on 5 April. But already the schedule fixed by Mutaguchi was slipping, and this was to bedevil the Japanese as they ran out of food, ammunition and medicine. By this time the movement of the 5th Division from the Arakan front was well under way, the division coming under command of the IV Corps on 19 March less Brigadier D. F. W. Warren’s 161st Brigade at Kohima under command of the Indian XXXIII Corps. The 31st Division completed its investment of Kohima on 7 April and there followed a small but exceptionally bitter 12-day battle in this tiny but very precipitous region as the 58th Regiment tried to take Kohima and as the 138th Regiment attempted to overrun the rest of the 161st Brigade at Jotsoma on the road to Dimapur.

Grim fighting at Kohima
Help was on its way as Stopford pushed forward his 2nd Division with Brigadier V. F. S. Hawkins’s British 5th Brigade in the lead. On 14 April the 5th Brigade overwhelmed the Japanese roadblock at Zubza and pushed on to relieve the 161st Brigade at Jotsoma. By 18 April the brigade had pushed past two more roadblocks and relieved Kohima. Once the garrison had been reinforced and resupplied, the 5th Brigade pulled back as part of the 2nd Division’s effort to take the 31st Division in a pincer movement beginning on 26 April with the 5th Brigade on the left and Brigadier J. D. Shapland’s British 6th Brigade on the right. The move was only partially successful, the 5th Brigade again linking with the Kohima garrison on 27 April but Brigadier W. H. Goschen’s British 4th Brigade being held on Mt Pulebadze and taking GPT Ridge south of Kohima only on 4 May. By now the 58th Regiment had been reinforced by the 124th Regiment. Between 4 and 7 May the main effort in the British-led battle to hold Kohima was assumed by the 6th Brigade and Brigadier F. J. Loftus-Tottenham’s Indian 33rd Brigade of the 7th Division, but these two brigades failed to take the Japanese line between the District Commissioner’s Bungalow and Jail Hill. The attack was renewed on 11 May and the position fell on 13 May. Between 15 and 31 May the 33rd Brigade was heavily repulsed on Gun Spur and Hunters Hill in the Naga Village north-east of Kohima, and between 25 and 28 May a similar fate befell the 2nd Division on the Aradura Spur south of Kohima. Finally the 7th Division broke through the Japanese line near the Naga Village on 1 June, allowing the 5th Brigade to outflank the Aradura Spur on 5 June and so render the Japanese position untenable.

The battle for Imphal
But already, on 31 May, the Japanese had begun to pull back, and the 2nd Division pushed south toward Imphal. All this while, the Indian IV Corps had been involved in very severe fighting against the 15th Division and 33rd Division in the area round Imphal. Scoones’s tactical plan was based upon the Allied retention of fortified boxes round each supply dump and the six airfields, using his four divisions, one parachute brigade and one armoured brigade supported by the formidable tactical air support afforded by the 27 fighter and fighter-bomber squadrons of Air Marshal Sir John Baldwin’s British 3rd Tactical Air Force at the disposal of the corps. Even so, the original defensive perimeter of the Indian IV Corps had to be contracted to an inner perimeter with the 5th and 23rd Divisions holding the north-eastern sector against the 15th Division, and the 20th Division and 17th Light Division holding the south-eastern and southern sectors against the 33rd Division. The Japanese were able to penetrate the defence with attacks toward Sengmai, Nunshigum, Palel and Ningthoukhong. Imphal was besieged for 88 days, and it was only on 22 June that the 5th Division was able to break out and link with the 2nd Division at Milestone 107 just north of the Imphal perimeter.

The Japanese were now totally exhausted, suffering from the first effects of starvation, and falling ill in ever larger numbers, and what was left of the 15th Army started to pull back toward the Chindwin river. Yet the Allies were still unable to break the Japanese, and despite the loss of some 53,500 men, including 30,500 dead, Mutaguchi was able to return to his start line against an indifferent pursuit. The Allied casualties had been 16,700, about one-quarter of them at Kohima. After the battle the Indian IV Corps (17th Division and 20th Division) was pulled back to India, and the Indian XXXIII Corps (British 2nd, Indian 5th, Indian 23rd and 11th [East Africa] Divisions) took over the pursuit to the Chindwin river, which the Allies reached only during the early part of December 1944.