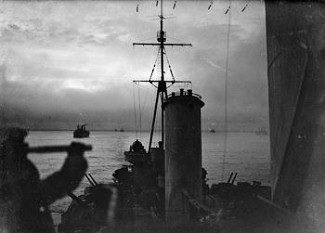 Lasting for just over three weeks between 1 and 22 March 1942, some 69 years ago, ‘Sportpalast’ was a German naval operation by the battleship Tirpitz and escorting destroyers against the Allied QP.8 homebound and PQ.12 outbound Arctic convoys. The operation was the German navy’s first attempt to disrupt the passage of Arctic convoys.

On 1 March the QP.8 convoy of 15 unladen ships (six British including one tanker, one Norwegian tanker, two Panamanian, four Soviet and two US) departed Murmansk, on the Kola Inlet, with the local escort up to 3 March by the Soviet destroyers Gremyashchy and Gromky as well as the British minesweepers Harrier and Sharpshooter. The convoy’s ocean escort comprised the corvettes Oxlip and Sweetbriar, and minesweepers Hazard and Salamander. Between 2 and 7 March more distant cover for the convoy was provided by the cruiser Nigeria and destroyers Offa and Oribi. On 3/4 March ice combined with a severe storm to scatter the convoy, and Gromky was damaged on her way back to port.

The PQ.12 convoy of 17 laden ships (seven British, seven Panamanian and three Soviet) also departed on 1 March, in this instance from Hvalfjördur in Iceland, with the local escort up to 4 March of three armed trawlers. The convoy was to have been joined by five ex-Norwegian whalers (Shera, Shusa, Stefa, Sulla and Svega) that were being transferred to the USSR, but of these only two joined the convoy, two others turning back and one sailing directly to the USSR. The British covering force comprised the battleship Duke of York, battle-cruiser Renown, cruiser Kenya and destroyers Echo, Eclipse, Eskimo, Faulknor, Fury and Punjabi under the command of Vice Admiral A. T. B. Curteis, and this joined on 4 March to remain in touch up to 12 March, though Kenya was detached between 8 to 12 March. Oribi was damaged by pack ice on 6/7 March, and Shera capsized in a storm on 9 March after a great weight of ice had accumulated on her superstructure.

On 5 March a Focke-Wulf Fw 200 Condor long-range maritime reconnaissance bomber located and reported the PQ.12 convoy some 80 miles (130 km) to the south of Jan Mayen island, and in response the Germans established a patrol line with U-134, U-377, U-403 and U-584 in an effort to achieve an interception. On 5 March, moreover, the 52,600-ton battleship Tirpitz, commanded by Kapitän zur See Karl Topp and with Vizeadmiral Otto Ciliax, the Befehlshaber der Schlachtschiffe (commander of battleships), on board, steamed out of the Fættenfjord and was joined on the following day by the destroyers Paul Jacobi, Friedrich Ihn, Hermann Schoemann and Z 25 that had sailed from Trondheim in a foray to intercept and destroy the convoy. The German intent to locate and destroy the convoy had been revealed by ‘Ultra’ decrypts, however, and this allowed the British to plan countermeasures: of the five Allied submarines in the area (Sealion, Seawolf, Trident, Free French Junon and Norwegian Uredd), Sealion sighted and reported the departure of the German force. In the meantime Curteis’s covering force and the main body of Admiral Sir John Tovey’s Home Fleet (battleship King George V, fleet carrier Victorious, heavy cruiser Berwick, and destroyers Ashanti, Bedouin, Icarus, Intrepid, Lookout and Onslow) joined near Jan Mayen island after departing Scapa Flow on 6 March. Kenya was at first detached as part of the PQ.12 convoy’s close escort, but the cruiser Sheffield, despatched to relieve Berwick as the latter was suffering engine problems, was damaged by a mine and had to turn back. The visibility was very poor, and this was one of the factors which meant that the Home Fleet failed to locate Tirpitz. The German ships only just missed the QP.8 convoy and its very light escort force, and the German destroyers found only a straggler, the 2,815-ton Soviet Izhora, which was carrying a cargo of timber and was sunk by Friedrich Ihn after she had straggled. 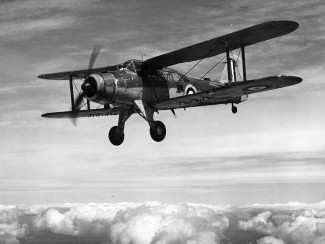 The German and British naval forces as well as the two convoys, which passed through each other’s columns on reciprocal course at about 12.00 on 7 March, managed to move around each other in the vicinity of Bjørnøya without meeting each other or being seen by reconnaissance aircraft. Advice from the German high command and the British Admiralty added to the confusion of the commanders on the spot. Eventually, on 9 March, aircraft from Illustrious spotted and shadowed the German force, despite being attacked by Tirpitz’s own floatplanes, and the German battleship was attacked off the Vestfjord, without success, by 12 Fairey Albacore torpedo bombers of the FAA’s Nos 817 and 832 Squadrons from Victorious, which was escorted by Bedouin, Eskimo, Faulknor and Tartar. Two of the British aircraft were shot down. An attempt by three Junkers Ju 88 medium-range bombers to attack the British carrier on 9 March was similarly unsuccessful.

The QP.8 convoy, additionally escorted for a brief period by the heavy cruisers Kent and London, divided on 9 March and its ships reached the Icelandic ports of Hvalfjördur and Akureyri on 11 March. The PQ.12 convoy reached Murmansk on the following day after being joined on 10 March by a local escort in the form of the Soviet destroyer Gremyashchy and British minesweepers Harrier, Hussar and Speedwell. Tirpitz was meanwhile making her return to Norwegian waters with Narvik as her destination. On 11/12 March the destroyers Bedouin, Eskimo, Faulknor, Fury, Icarus, Intrepid, Punjabi and Tartar attempted to intercept her off Bodø, but the battleship was then transferred to Trondheim on 12/13 March.

Despite the fact that the fact that the two convoys had reached port safely, the incident had demonstrated the threat that such convoys now faced from surface ship as well as U-boat and air attack. On 30/31 March and 27/28 April 1942 Air Chief Marshal Sir Arthur Harris’s RAF Bomber Command made unsuccessful attempts to neutralise Tirpitz. The battleship in fact spent most of World War II in various bases along the coast of German-occupied Norway. Here she was rightly perceived as a persistent and major threat to the Allies’ naval operations in the North Atlantic and Arctic Oceans, and this tied down major British and to a lesser extent US naval strength that could have been better employed in other theatres. Yet Tirpitz in fact never fired her main armament of eight 380-mm (15-in) guns at an Allied ship, and was involved in only one combat operation, which was the only time she fired on ground targets. From 1943 onward Tirpitz was the target of numerous Allied air raids and submarine attacks until, on 12 November 1944, Avro Lancaster heavy bombers of the Royal Air Force sank Tirpitz at her moorings with 12,000-lb (5443-kg) ‘Tallboy’ bombs in Operation ‘Catechism’.