Between 1 and 3 May 1945, Operation ‘Dracula’ was the British amphibious capture of Rangoon, capital of Burma, in the hope of preventing General Heitaro Kimura’s Burma Area Army from organising a last-ditch defence as its formations fell back down the valleys of the Irrawaddy and Sittang rivers before the advance of Lieutenant General F. W. Messervy’s Indian IV Corps and Lieutenant General Sir Montague Stopford’s Indian XXXIII Corps of Lieutenant General Sir William Slim’s 14th Army. It was during July 1944 that Admiral Lord Louis Mountbatten’s South-East Asia Command began to formulate definite plans for the reconquest of Burma. At this time the Japanese ‘U’ offensive against Imphal and Kohima was still under way, but it was clear to the Allied high command that the Japanese were being defeated and would to be forced to retreat after suffering catastrophic numbers of casualties.

One of the strategic options considered by the South-East Asia Command was an amphibious assault on Rangoon. This originally had the working designation ‘Z’, the concurrent ‘X’ being used for the recapture of northern Burma by Lieutenant General Daniel I. Sultan’s US-led but largely Chinese-manned Northern Combat Area Command with the limited objective of completing the Ledo Road linking China and India, and ‘Y’ for an Allied offensive into central Burma by the 14th Army. ‘Z’ offered several advantages and was developed via ‘Vanguard’ into ‘Dracula’, for it was rightly estimated that the loss of Rangoon, the capital and major seaport of Burma, would be more disastrous for the Japanese in 1945 even than it had for the British in 1942. Not only was it the principal port by which the Japanese received their supplies and reinforcements, but it lay very close to the other Japanese lines of communication with Thailand and Malaya. An advance north or east from Rangoon of only 40 miles (65 km) to Pegu or across the Sittang river would cut the Burma Railway, the only viable overland link the Japanese possessed with their forces in Thailand and Malaya. If Rangoon fell, the Japanese would therefore be compelled to withdraw from almost all of Burma, abandoning much of their equipment.

Lack of amphibious resources
Unfortunately, an amphibious assault of the size required would need resources (landing craft, escorting warships, engineering equipment, etc.) which would not be available until the campaign in Europe had been ended. In these circumstances, therefore, ‘Dracula’ was postponed and ‘Y’ was adopted as ‘Capital’. When landing craft and other amphibious resources became available in 1945, they were first used in comparatively small-scale operations in the Burmese coastal province of Arakan. It was then intended that they would be used in attacks on the Kra isthmus connecting Thailand and Malaya, and in a descent on Malaya. Then, during February and March 1945, the 14th Army fought and won the major campaign in central Burma, namely ‘Extended Capital’ and its development across the Irrawaddy river to Mandalay and Meiktila. In this campaign the Burma Area Army’s 15th Army and 33rd Army, commanded respectively by Lieutenant General Shihachi Katamura and Lieutenant General Masaki Honda, had suffered the decimation of their formations, and been compelled to retreat southward into the Shan states, their limited escape routes to the east being destroyed by the British-led Karen levies in the Shan hills.

Now possessing all of the strategic and operational advantages in Burma, Slim ordered the 14th Army to exploit southward, along the Sittang river valley east of the Irrawaddy river valley, in the direction of Shwegyin and Pegu. During April, the Indian IV Corps, spearheaded by an armoured brigade, advanced almost 200 miles (320 km) south and once more met major resistance only at Pegu, a mere 40 miles (65 km) north-east of Rangoon, toward the end of the month. Despite these spectacular successes, Slim was uneasy. Although Messervy and several of his subordinate formation commanders considered there was at least a modest chance of capturing Rangoon at the beginning of May, the 14th Army’s lines of communication were now mightily stretched from their north-western termini in eastern India. Slim was also conscious of the fact that the monsoon season was imminent, and that their heavy rains and the resulting sodden earth would, as always, be a distinct hindrance to movement over any distance and at any speed. In particular, it would be make resupply by air very difficult. It was feared that the Japanese would defend Rangoon to the last man, as they had done elsewhere in the Pacific theatre. 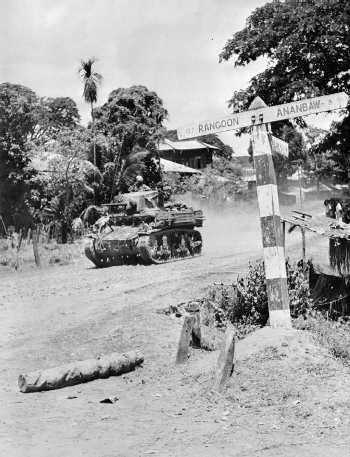 ‘Dracula’ reinstated
Since his forces would be in a disastrous supply situation if forced into an urban battle in Rangoon, during mid-April Slim asked for ‘Dracula’ to be reinstated for implementation at a time before the monsoon started early in May. As a necessary preliminary step, the Indian IV Corps was ordered to capture the airfields at Toungoo on the Sittang, three-fifths of the way from Meiktila to Shwegyin, so that air cover could be provided for the invasion. Major General E. C. R. Mansergh’s Indian 5th Division obliged, taking the airfields on 22 April.

At this time the headquarters of the Burma Area Army were located in Rangoon. Here there were no fighting formations, but present were sizeable numbers of line of communication troops and naval personnel. As the leading British and Indian troops (Major General D. T. Cowan’s Indian 17th Division, with the bulk of the Indian 255th Tank Brigade) approached Pegu, many of these rear-area troops and some hastily mobilised Japanese civilians were assembled as Major General Hideji Matsui’s 105th Independent Mixed Brigade. Also known as ‘Kani’ Force, this comprised the men of anti-aircraft batteries, airfield construction battalions, naval anchorage units, NCO schools, and many other ‘tail’ elements, and for several days operated in the ‘tooth’ role to hold Pegu and deck further British and Indian advance to the south. Kimura had already decided not to defend Rangoon, however, but instead to pull all of his remaining forces out of the city for a withdrawal to Moulmein, at the head of Burma’s long southern tail. Many troops left by sea, and nine of 11 ships in one convoy were sunk in a British destroyer attack. Most of Kimura’s headquarters and the establishments of Subhas Chandra Bose (commander of the Indian National Army) and Ba Maw (prime minister of the nominally independent Burmese government) left by land, covered by the action of Matsui’s troops. Kimura himself left by air. At first Matsui had believed that his task was to buy the time needed for the preparation of Rangoon’s defence but, despite his anger on learning of the evacuation, was now in the position in which his units had been pushed into the hills west of Pegu, and could neither return to Rangoon nor escape eastward.

Parallel plans
Before it issued its instructions for the reinstatement of ‘Dracula’, the South-East Asia Command had been preparing ‘Roger’ for a descent on Phuket island off the west coast of Thailand, so the naval and air elements needed for ‘Dracula’ were thus already available. Lieutenant General Sir Philip Christison’s Indian XV Corps was allocated the task of controlling the ground forces, and Major General H. M. Chambers’s Indian 26th Division and other forces sailed in six convoys from Akyab and Kyaukpyu on the Arakan coast of western Burma, during 27/30 April. This Force ‘W’ was commanded by Rear Admiral B. C. S. Martin, and included the headquarters ship Largs. The Indian 26th Division was embarked on the headquarters landing ships Waveney and Nith, the infantry landing ships Glenroy, Persimmon, Prins Albert and Silvio, the emergency repair landing ship Barpeta, 45 tank landing ships and 110 small landing craft, and their escort comprised the Indian sloops Cauvery, Narbada, Godavari, Kistna, Sutlej and Hindustan. There were also 22 minesweepers from the 7th and 37th Minesweeping Flotillas.

The landing force was covered by the 21st Carrier Squadron (anti-aircraft cruisers Phoebe and Royalist, escort carriers Hunter, Stalker, Emperor and Khedive, destroyers Saumarez, Venus, Vigilant and Virago, eight frigates and two sloops). In ‘Bishop’, Vice Admiral H. T. C. Walker’s covering group (Task Force 63 with the battleships Queen Elizabeth and French Richelieu, escort carriers Shah and Empress, cruisers Cumberland, Suffolk, Ceylon and Dutch Tromp, and destroyers Rotherham, Tartar, Nubian, Penn and Verulam) undertook carrierborne air and gunfire attacks on the Japanese positions at Car Nicobar in the Nicobar islands and Port Blair in the Andaman islands. TF62, comprising the destroyers Roebuck, Racehorse and Redoubt, undertook gunfire bombardments of Martaban on 30 April and Car Nicobar on 1 May and, in the process, destroyed a convoy of nine ships on 30 April: this last was the main Japanese evacuation convoy from Burma. On 5 and 6 May the 21st Carrier Squadron, with the destroyers Virago, Tartar and Nubian, raided the Japanese bases between Mergui and Victoria Point in southern Burma. On 6 May TF63 shelled Port Blair in the Andaman Islands with battleships, cruisers and the destroyers Rotherham, Saumarez, Venus, Vigilant and Verulam. On 9 May the naval forces return to Trincomalee.

Meanwhile the RAF contributed the squadrons of Air Vice Marshal the Earl of Bandon’s No. 224 Group to cover the landings from the airfields around Toungoo and Ramree. On 1 May, 12 squadrons of Consolidated B-24 Liberator heavy bombers attacked the known Japanese defences of Rangoon, and in the middle of the morning an RAF observation post, a detachment from the Special Operations Executive’s Force 136 and the 2/3rd Gurkha Parachute Battalion of the Indian 50th Parachute Brigade was paradropped at Elephant Point between the estuaries of the Irrawaddy and Rangoon rivers to ensure that no Japanese artillery could impede the entry into the Rangoon river estuary by the assault convoy. The British and Indian troops quickly mopped up some small Japanese parties, either left as rearguards or overlooked in the evacuation, and themselves suffered 30 casualties from inaccurate Allied bombing.

‘Extract digit’
After Elephant Point had been secured, minesweepers cleared a passage up the river, and landing craft began coming ashore in the early hours of the morning of 2 May. Meanwhile, a reconnaissance aeroplane flying over Rangoon detected no sign of the Japanese, and also noticed a message painted by released British prisoners of war on the roof of the jail: ‘Japs gone. Extract digit’. The crew landed their aeroplane on Mingaladon airfield, where it was badly damaged. The crew then walked to the jail, where they found 1,000 former prisoners of war. Informed of the Japanese departure, the crew then went to the docks, commandeered a sampan and sailed down the river to meet the landing craft.

The ‘Kani’ Force joined the remnants of Lieutenant General Shozo Sakurai’s 28th Army, falling back from the western coast, in the Pegu Yomas separating the Irrawaddy and Sittang river valleys. During July the surviving Japanese attempted to break out to the east and rejoin the other Japanese armies east of the Sittang, but suffered a very high casualty rate. The naval personnel broke out separately, and were effectively destroyed. In strategic terms, ‘Dracula’ had replaced ‘Culverin’, the proposed invasion of northern Sumatra, for which there were inadequate forces.

For a major undertaking ‘Dracula’ had been very cheap in lives: the British forces suffered 24 casualties, most of them as a result of ‘friendly fire’, and the Japanese 30 men.