Operation ‘Menace’ was the unsuccessful British and Free French attempt between 31 August and 29 September 1940 to take the strategically important port of Dakar in French West Africa (now Senegal), which was currently under Vichy French control, and to install Free French forces under Général de Brigade Charles de Gaulle. At the beginning of the war, the strength of the French navy in the Mediterranean was to have countered that of the Italian navy, thereby leaving the Royal Navy to concentrate its own primary strength on countering German surface warship operations in the North Sea and Atlantic. After the defeat of France and the conclusion of the armistice between France and Nazi Germany, implemented on 25 June 1940 and dividing France into German-occupied and Vichy French-controlled zones, there was considerable confusion as to the allegiance of the various French colonies. Some, like French Cameroun and French Equatorial Africa, joined the Free French based in the UK, while others, such as French North Africa, French West Africa, Syria and French Indo-China, remained under Vichy French control. The possibility that the French fleet might fall into German control led the British to attack the French fleet in the Algerian port of Mers el Kébir in Operation ‘Catapult’ on 3 July 1940. While the British had suppressed, for the time being at least, a potential threat, the attack discouraged other units from joining the Free French and British. 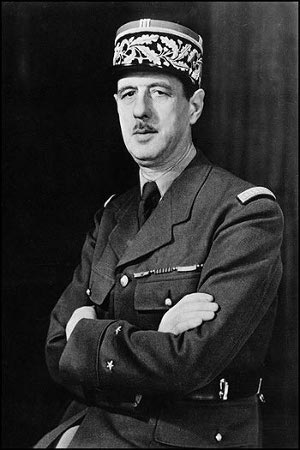 de Gaulle believed that he could persuade the French forces in Dakar to join the Allied cause. This was seen as a potentially decisive event, for the fact that another Vichy French colony had switched allegiance would have great political impact. Moreover, the gold reserves of the Banque de France and the Polish government in exile were held in Dakar, and the port of Dakar as a naval base was far superior to Freetown, Sierra Leone, which was the only Allied port in the area, and in Allied hands would greatly ease the Allied task of protecting convoys passaging across and up and down the Atlantic.

After the implementation of the armistice which ended hostilities between France and Germany, there was considerable confusion as to the allegiance of the various French colonies and mandated territories comprising the African federation (Dahomey, French Guinea, French Sudan, French Togo, Ivory Coast, Mauritania, Niger, French West Africa and Upper Volta). Dakar, the capital of French West Africa, was the third largest port in the French empire, and the capital of Pierre Francois Boisson, who had been appointed as the Vichy French high commissioner of Black Africa (French West Africa and French Equatorial Africa). Boisson in fact controlled only French West Africa as French Equatorial Africa was on the verge of rallying to the Free French as a result of the Battle of Gabon (otherwise the Battle of Libreville) between 8 and 12 November. The battle resulted in the Free French forces taking Libreville, the capital of Gabon, and then all of French Equatorial Africa from Vichy French forces. On 8 October de Gaulle arrived in Douala, the capital of French Cameroun. Here, on 12 October, he sanctioned plans for the invasion of French Equatorial Africa, which de Gaulle wished to use as the springboard for attacks into Axis-controlled Libya. For this reason, he travelled north to assess the situation in Chad, located on the southern border of Libya. On 27 October Free French forces crossed into French Equatorial Africa and took Mitzic, and on 5 November the Vichy French garrison of Lambaréné, a key town on the Ogooué river, the main waterway of inland Gabon, surrendered. Meanwhile the main Free French forces under Major Philippe François Marie Leclerc and Major Marie Pierre Koenig left Douala with the task of taking Libreville. On 8 November 1940, the British sloop Milford sank the Vichy French submarine Poncelet. Landed at Pointe La Mondah, Koenig’s forces included French Legionnaires (including the 13th Demi-Brigade de la Légion Etrangère), Senegalese and Camerounian troops. On 9 November, Westland Lysander army co-operation aircraft from Douala bombed the airfield at Libreville. Despite meeting strong resistance during its approach march, Koenig’s force later took the airfield. Free French naval forces, including the colonial sloop SavorgnandeBrazza, attacked and sank a sister ship, the Vichy French Bougainville. On 12 November the last forces commanded by Général de Brigade Marcel Tetu, surrendered at Port Gentil. Three days later, de Gaulle’s personal appeal failed to persuade most of the captured Vichy French soldiers, including Tetu, to join the Free French movement and, consequently, these were interned as prisoners of war in Brazzaville, French Congo, for the rest of the war.

Meanwhile, in French West Africa, Boisson tried and generally succeeded in applying a policy of strict neutrality, but the presence of powerful French warships in Dakar caused the British considerable concerns that dovetailed with the ambitions of de Gaulle to enlarge his Free French ‘empire’. de Gaulle believed that he could persuade the Vichy French forces in West Africa to join the Allied cause, even though considerable intelligence suggested strongly that this would not be the case. As always ready for any means of striking at the enemy indirectly rather than directly, Prime Minister Winston Churchill concurred. The resulting Allied plan had been finalised and ‘Menace’ authorised on 27 August. The invasion force sailed in three groups, that from Scapa Flow consisting of three transports escorted by the light cruiser Fiji and three destroyers, that from the Clyde river of the heavy cruiser Devonshire, one destroyer and three Free French sloops, and that from Liverpool of three transports escorted by three destroyers. The embarked ground forces comprised 4,200 British and 2,700 Free French troops, whose heavy equipment and other specialised stores sailed with a mercantile convoy to Freetown, where the invasion force was to gather for the operation proper. It was decided to send a naval force of one aircraft carrier, two old battleships, three heavy cruisers, two light cruisers and 10 destroyers to escort the transports, which were to carry the 6,900 troops (centred on the Royal Marines’ 101st Brigade) under the command of Major General M. N. S. Irwin, and then provide gunfire support.

The orders given to this Allied force were first to seek a negotiated settlement with the Vichy French high commissioner, and only if this was unsuccessful to use force to take the port and city. Under the command of Vice Admiral J. H. D. Cunningham, previously commander of the 1st Cruiser Squadron in Admiral Sir Charles Forbes’s Home Fleet, the Allied ships of this Force ‘M’ comprised the fleet carrier Ark Royal, battleships Barham and Resolution, heavy cruisers Australia (replacing Fiji which had been torpedoed on 1 September), Cumberland and Devonshire, light cruisers Dragon and Delhi, destroyers Echo, Eclipse, Escapade, Faulknor, Foresight, Forester, Fortune, Fury, Greyhound and Inglefield, escort/patrol vessels Bridgewater, Commandant Dominé, Commandant Duboc, Houduce, Milford and Savorgnan de Brazza, six troop transports (including the Dutch liners Pennland and Westernland and the Polish Sobieski), and one British and four Free French freighters.

The Vichy French naval forces present at Dakar under the command of Contre-amiral C. J. L. Bourragué were the battleship Richelieu, cruisers Georges Leygues and Montcalm, destroyers L’Audacieux,Le Fantasque, Le Malin and Le Hardi, escort/patrol vessels Calais, Commandant Rivière, D’Entrecasteaux, D’Iberville, Gazelle and La Surprise, auxiliary cruisers El Djezair, El Kantara, El Mansour, Schoelzer and Ville d’Oran, submarines Ajax, Bévèziers and Persée, and merchant ships Porthos, Tacouna and Sally Maersk. One of the most advanced warships in the French navy, Richelieu had left Brest on 18 June before the Germans reached the port despite the fact that she was only about 95% complete. She had been damaged by air-launched torpedo attack on 8 July.

Until the establishment of the Vichy French government, the British light carrier Hermes had been operating with the French forces in Dakar as the French had no such ships of their own. She had been ordered to sea and remain on watch. Joined by Australia, her bombers had attacked Richelieu, hitting her with one torpedo. When the Allied force arrived, therefore, the French battleship was immobilised but able to function as a floating gun battery. Three submarines and several lighter ships had been there with her. A note of confusion had been added to the overall situation on 11 September when Cunningham received a report that the Vichy French cruisers Georges Leygues, Gloire and Montcalm, escorted by three large destroyers, were believed to be in the area after passing westward through the Strait of Gibraltar. There was considerable confusion in British naval circles (in the UK, at Gibraltar and with Force ‘M’) about the likely destination of the Vichy French squadron and how the problem was to be overcome, but the matter resolved itself when the cruisers Georges Leygues and Montcalm, as well as the three destroyers, put into Dakar, Gloire having been shepherded into Casablanca after suffering mechanical problems. The cruiser Primauguet, patrolling from Dakar, was also persuaded to put into Casablanca. The French squadron had in fact been destined for Libreville in Gabon as a bolster against Free French leanings in central Africa, Chad having defected recently to the Allied cause, and its fortuitous presence in Dakar did much to strengthen the pro-Vichy French stance of the administration in Dakar, already confident of its ability to resist British naval pressures thanks to the availability of Richelieu.

The British and Free French forces reached Freetown, to the south of Dakar, on 14 September and completed their final preparations before heading north in three groups between 19 and 21 September.

On 23 September Fleet Air Arm aircraft dropped propaganda leaflets on the city. Free French aircraft flew off Ark Royal and landed at the airport. A boat carrying de Gaulle’s representatives entered the port, but was engaged with gunfire. At 10.00, Vichy French ships trying to leave the port received warning shots from Australia. The ships returned to port but the coastal forts opened fire on Australia. This led to an engagement between the battleships and cruisers on the one hand, and the forts on the other. In the afternoon Australia intercepted and fired on the Vichy French destroyer Audacieux, setting her on fire and causing the crew to beach the ship. In the afternoon, an attempt was made to set Free French troops ashore on a beach at Rufisque, to the north-east of Dakar, but they came under heavy fire from strongpoints defending the beach. de Gaulle now declared that he did not want to ‘shed the blood of Frenchmen for Frenchmen’ and the attack was called off. During the next two days, the Allied fleet attacked the Vichy French coastal defences. Two Vichy French submarines were sunk, and a destroyer was damaged. After both British battleships and two cruisers had been damaged, the Allied force withdrew, leaving Dakar and French West Africa in Vichy French hands. In matériel terms, ‘Menace’ had cost the Allies damage to two battleships and two cruisers, and the loss of six torpedo bombers, while the Vichy French had lost one destroyer and two submarines sunk, and suffered damage to one battleship and the Danish freighter Sally Maersk.

The effects of the Allied failure were mostly political. de Gaulle had believed that he would be able to persuade the Vichy French at Dakar to change sides, but this turned out not to be the case, which damaged his standing with the Allies. French West Africa returned to neutrality, but finally declared for the Allies only in November 1942 after the German occupation of Vichy France in ‘Anton’.